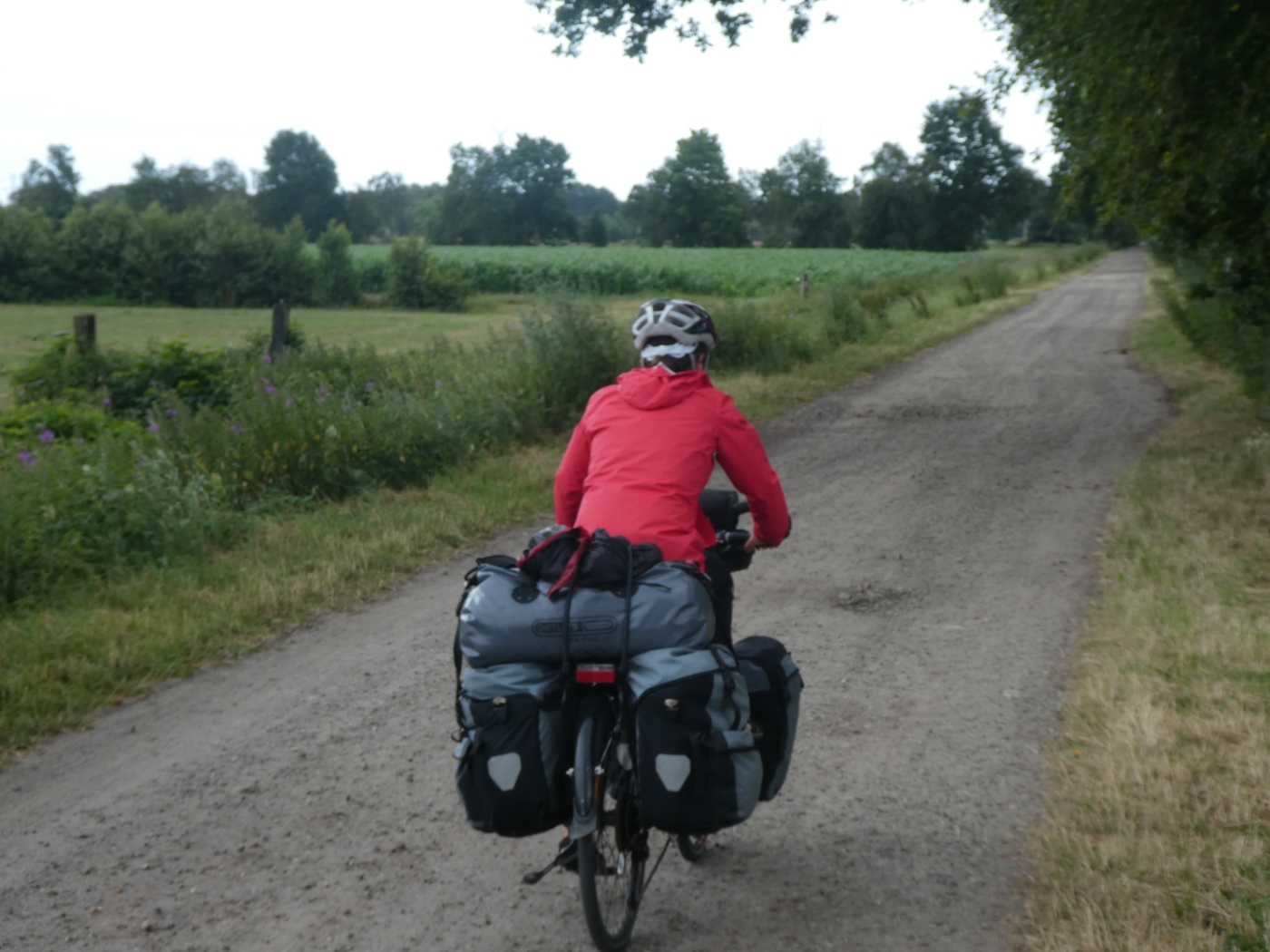 The birds were out first thing this morning. I could hear them. I always take this as a good sign because I figure the birds aren’t out twittering if it’s pouring rain, they’re still nestled in a nest somewhere, well out of it. So even before I peeked outside, the signs were good. Further inspection proved that we did indeed have a morning without rain and in fact there was even a glimpse of sunshine! Brilliant!

We packed up and pedalled out and the sun hung around for a while before disappearing to be replaced by grey, but at least the rain stayed away. The ride was very much as the crow flies, straight, straight, straight alongside a road. Again, not a whole lot to see but we went through some little neighbourhoods, passed by some trees and then Steve stopped to present an option. We could keep going straight, and it had been dead straight, on the path ahead with the wind blowing in sideways, or we could turn and take a different route that would go around some back roads and then join back up with the main road we were on. However, that turn would have us going straight into a headwind. No thanks, it was tough enough going with a cross wind, we’ll keep it straight thanks very much.

We passed by the Oste-Hamme Canal, a 19km long canal that was built from 1769-1790 and was used mainly by peat ships and small ships between Bremervörde and Bremen.  It took such a long time to construct because the peat soil kept slipping and collapsing, so the canal had to be continually redug.

With the cold wind still making progress a challenge, we began scouting for elevenses locations out of the wind. None were presenting themselves until we saw a bench in a car park outside a chemist. That’ll do, since the chemist was giving us a bit of shelter from the wind and any little bit we could get was most welcome.

When we pedalled on, Steve was in the lead and a bit ahead of me. An older man cycled leisurely past me and smiled, said something and pointed to Steve up ahead. I think he was either telling me to get a move on and catch up or saying Steve should be waiting for me. Whatever it was, it was said in such a smiling, jovial way that I laughed and he smiled again and we pedalled on. We get this all the time. People speak to us in such a friendly way, I just wish I knew what they were saying. When we rode off the ferry yesterday and were passing the long line of cars waiting to get on, a man wound down his window and gave a big smile and called out something to us. We said “sorry” as the beginning of apologising for not speaking German, when he realised we weren’t understanding, he said “ok” and gave us a big wave and a smile. Whatever he said it felt very friendly and encouraging. Like I’ve said before, there are wonderful friendly people everywhere and we need to hear more about them, to balance the woes of the world that we hear so often.

We pedalled on, straight, straight, straight. Then a bit of a corner onto a different road and then more straight. The wind was really starting to take the shine off things and it was a cold wind too. Steve said his feet were cold and he was feeling the elements as much as me. Our straight road then became gravel for a while, just for some added effort to avoid the swerves in the pebbles and swerves from the wind. Oh, that wind! It didn’t let up. It was as strong as ever. It blew and pushed and roared in from the side and it just made the going extra tough.

We reached the outskirts of Bremen and had a nice long, and again straight, path to follow. There were a lot of runners around and cyclists and we spotted a little shelter to sit in and take a break before the final push into the city. As we sat there, a group of cyclists rode past, smiled and said “something, something, something, gut idee” those last words we could just understand, as saying “good idea”, to be sitting in out of the wind. Through the park we continued and then into the streets of Bremen. As we rode along, a family on bikes passed us and the mum turned to me, smiled, gestured at the bike and said something I wish I understood. I said “danke schön” anyway, because it sounded like she was saying something encouraging or something about the load we were carrying. More friendly people who talk to us in such a lovely way. We also passed by a lady who rode towards us and saw from our load that we were tourists. “Gute fahrt,”  she said as she passed Steve and then “Gute fahrt” again as she passed me, wishing us individually a good journey. That one I did understand but I’ve been so grateful for the willingness of people to talk to us, even though we can’t speak the language, it’s been just wonderful. We have also learned some new words here in the north of Germany. My second favourite German word has become “moin” which means “hello”. In the south, we had been exchanging “morgen” with people as a shortened version of “guten morgen”  for “good morning” and this is generally what people would greet us with, either that or we would exchange “hallo”. In the north, the common greeting is “moin”, so I pedal along and everyone I pass, I give a hearty “moin” to, because that’s a word I can say! My all time favourite German word though is “tschüss” (pronounced “choose”), which means “bye”. It can be said with so many inflections and drawn out into a long form with a sing-song sound, I’ve heard it said so many different ways, even the extra friendly version of “tschüssee”. When I leave a shop or someone I’ve spoken too, I love departing with an upbeat “tschüss!”

Our straight riding then turned into the corners and twists and turns of navigating the city streets, all in bike lanes though so we were out of the traffic. We rode through the central marktplatz and it looked beautiful with its grand buildings and cobbled square.

We are staying an extra day here to have a roam around Bremen. All I know of it is from the childhood favourite fairytale The Musicians of Bremen, so I wanted to see it just because of that. After seeing the lovely old square, I’m looking forward  to exploring further and seeing what we can discover about Bremen, that place the Brothers Grimm chose as a destination for their farmyard heroes in the classic tale.

So, another day of wind and a chilly ride that was just as the crows would have done it as we pedalled along a long straight path beside a long straight road. The rain held off though which was a fabulous improvement on yesterday. We had some more friendly people along the way and arrived at a pit stop that we will now have a chance to wander and roam through. What we’ve seen of Bremen so far, on our ride in and during our walk to find a laundry, it looks like a really interesting place. We will leave the straight behind us and instead, turn corners, weave our way through streets and lanes and see what’s hiding in the nooks and crannies of another place we are lucky enough to visit and explore. Even though they didn’t actually make it here, it was good enough for a donkey, a dog, a cat and a rooster so it’s sure worth a look to us!

Time in the saddle: 3 hours 55 minutes