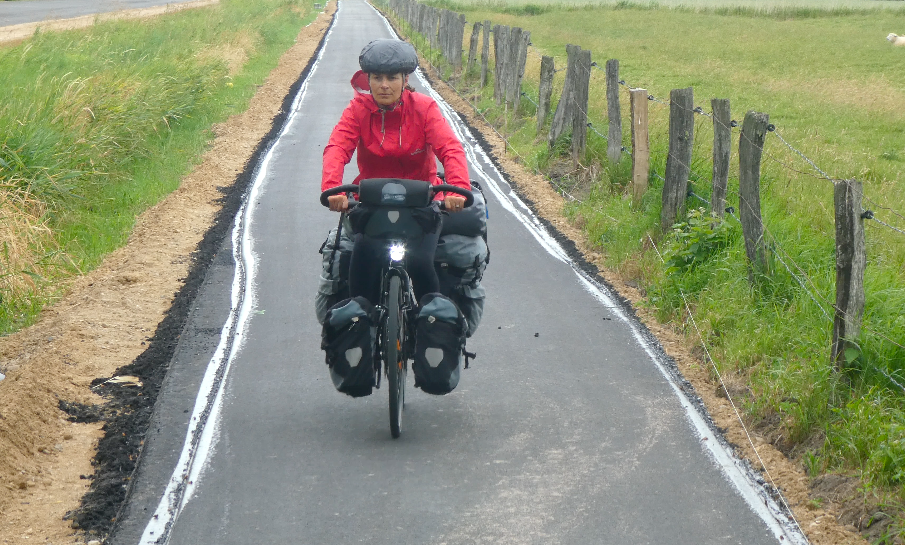 Wimbledon may be on at the moment, but nothing could compare to the stroke play across the net at the inaugural Nordensee Camping Grand Slam Table Tennis Final. There was tension, there were tears (from uncontrollable, no-sound-coming-out laughing), there were drop shots and net cords. It was all happening.  It was an all Tasmanian final, and given there were only two players in the draw, it was a showdown that the expectant crowd, albeit non-existent, were indeed expecting. Facing off in the final were Smash ‘Em Steve and Hit ‘Em Hard Heidi. These two had never faced each other on an international stage before and both were looking to bring the glory of victory home to their island state. Smash ‘Em won the spin and elected to serve. He came out strong and took the lead early, Hit ‘Em Hard staged a fightback, but Smash ‘Em was too good and took the first set 11-6. Hit ‘Em Hard came out firing in the second set, playing the lines and hitting the corners, racing to a 7-2 lead. Smash ‘Em made a comeback, but it wasn’t quite enough and Hit ‘Em Hard took the set 11-5. It all came down to the final set. The decider. Smash ‘Em had the serve and it was a nail biter. The invented crowd were on the edge of their seats as the points were shared between these two determined ping-pongers…4-3…4-4…5-4…5-5…Back and forth it went, making this a final for the ages. Then Hit ‘Em Hard got the break and capitalised, bringing out the top spin and racing ahead to take the final set 11-8. She waved to the crowd, shook hands with her gallant opponent and we don’t think Nordensee Camping  will see the likes of such a match again. Shame the television cameras were covering Wimbledon instead.

After the excitement of Grand Slam table tennis, I was up early again and, with a quiet road alongside our campsite, decided to go out for a run. The wind was still blowing hard, which made the run nice and easy in one direction and a bit of a slog on the way back. Clearly I am a glutton for punishment in the wind!

It had rained during the night and was still drizzling in the morning, along with the blowing wind, so once again we packed up everything wet, while also getting rained on in the process. That bit is never much fun, with everything getting damp and us getting wet along with it.

Pack up complete, we hit the road. It was chilly and drizzly and windy and we were both in multiple layers of thermals and fleece and jackets and Steve even broke out the ultimate fashion statement of waterproof sock and sandals. I used the weather as an opportunity to try out my new waterproof seat cover and waterproof helmet cover and, I can report, they both worked much better than the complimentary shower caps I had been using. Steve’s comment was, “You look like a mushroom.” Well, that’s rich coming from the fella in socks and sandals! Yes, we were indeed in new fashion tragedy territory today. Socks, sandals, mushroom head, we had reached a new high!

Whatever our appearance, we were ready to face the elements. We had a nice path, taking us off the road and the wind blew in sideways as we pedalled along. It was great to have a traffic-free path and we had fields and wind turbines around us and the grey sky above, looking like it was ready to dump on us again at any moment. As we turned corners and changed direction, the wind was either coming in sideways, or blowing in our face or, at times, pushing us from behind. 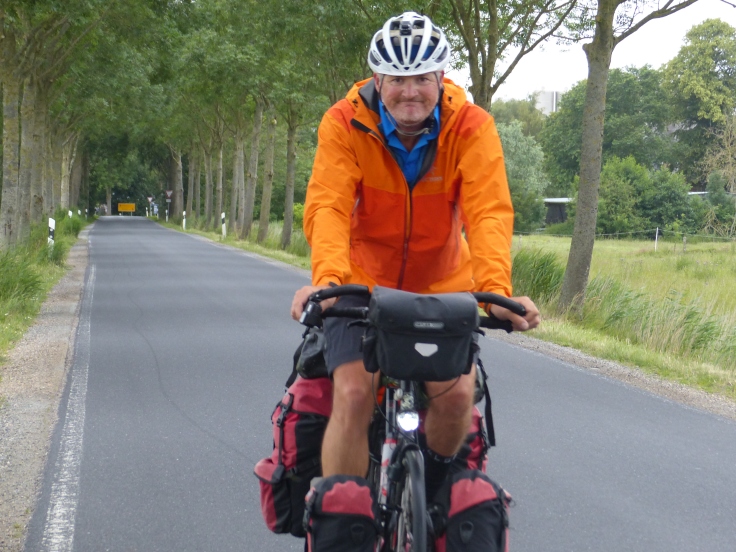 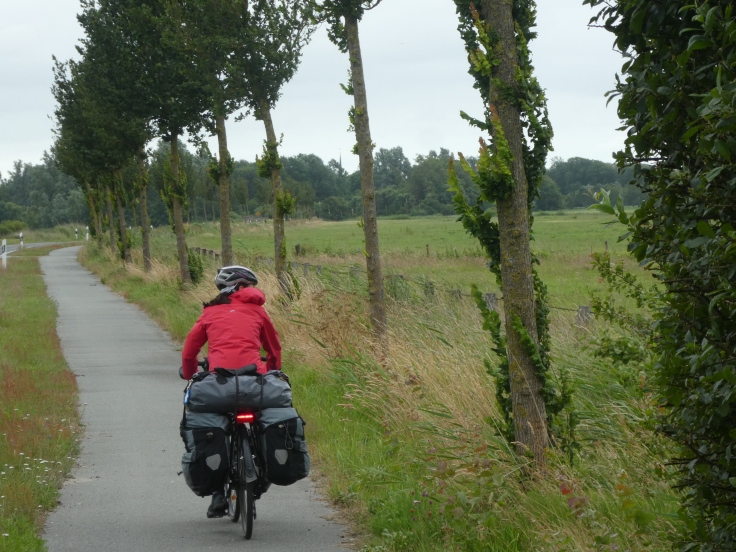 As we rode along the path, we saw a bus shelter that had become a shelter for a little flock of swallows. As we neared them, they flew off, all except one little tacker, who stayed put. That little one had found a spot out of the wind and rain and it wasn’t going anywhere! We stopped and said hello and it didn’t move, it just looked at us and made it very clear, that this particular shelter had been claimed!

As we rode into Tönning, the rain came down again, coming in sideways at us and we began to look for a sheltered spot for elevenses. We came upon a park, with a seat tucked in beside a hedge that gave some shelter from the wind and wasn’t getting too much rain, so that became our elevenses spot for the day.

It was cold. I was shivering. Steve was cold. He reached for his gloves.

“I wonder if this is a normal summer, or if it’s just dodgy weather because we’ve arrived?” I asked.

I dunno, we do have an effect on weather and cold, grey, windy and rain doesn’t sound much like summer to me.

As we pedalled out, Tönning looked like a nice little town, with a small harbour and bunting across the streets. 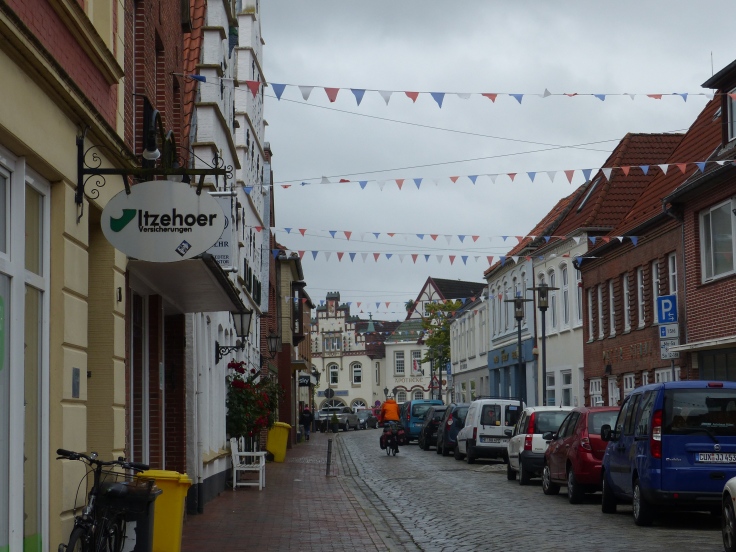 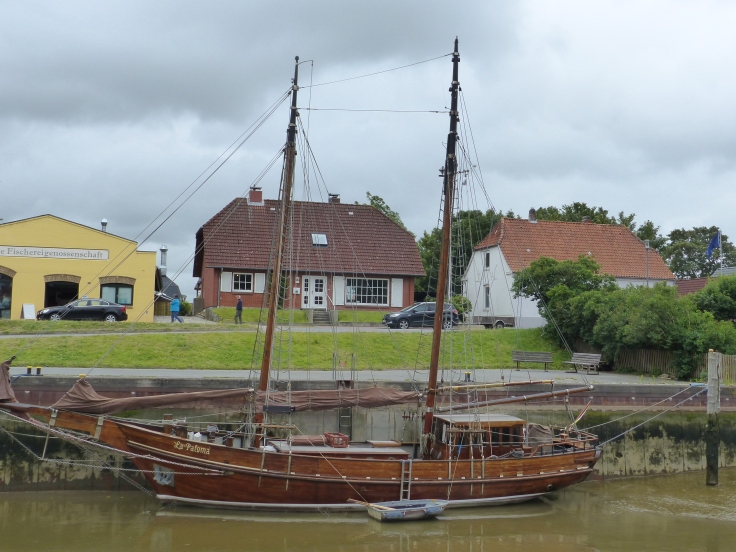 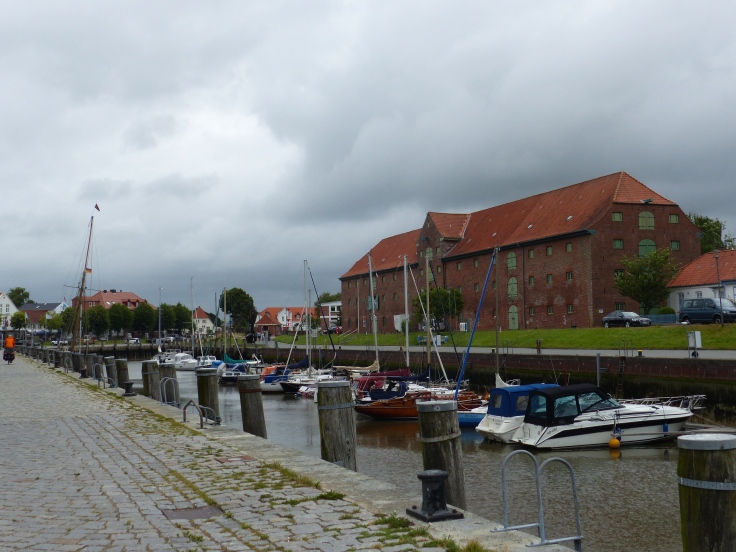 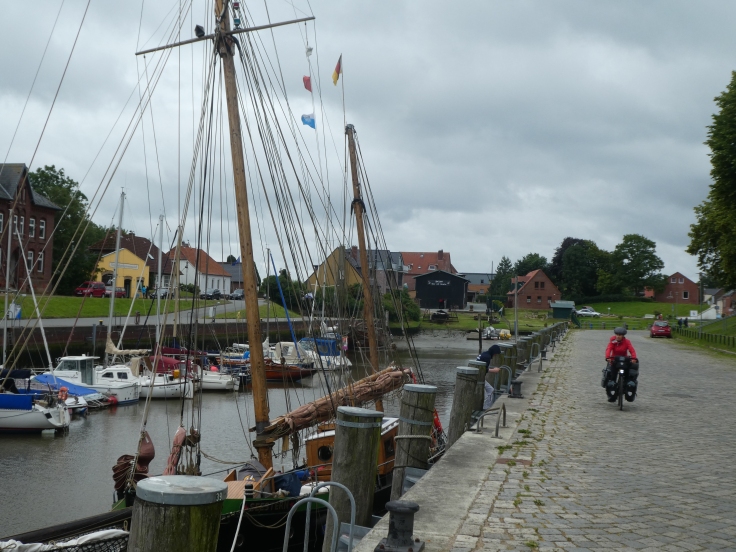 The onward ride continued to be a swervy one, as the wind blew us about, but the rain had eased.

“I think it’s brightening!” I called to Steve, as I looked optimistically at the sky. There did seem to be a break in the clouds. Not a blue one, but the sky did seem less grey. It looked like a good sign to me!

We had fields and farms and the ever-present wind turbines beside us and then we had some road works. Not so much road works, as path works. We rode along a newly sealed section of bike path, which just goes to show how well cyclists are taken care of over here. Just having a bike path, a single solitary bike path, let alone a well maintained and sealed one, would be fabulous progress back home. 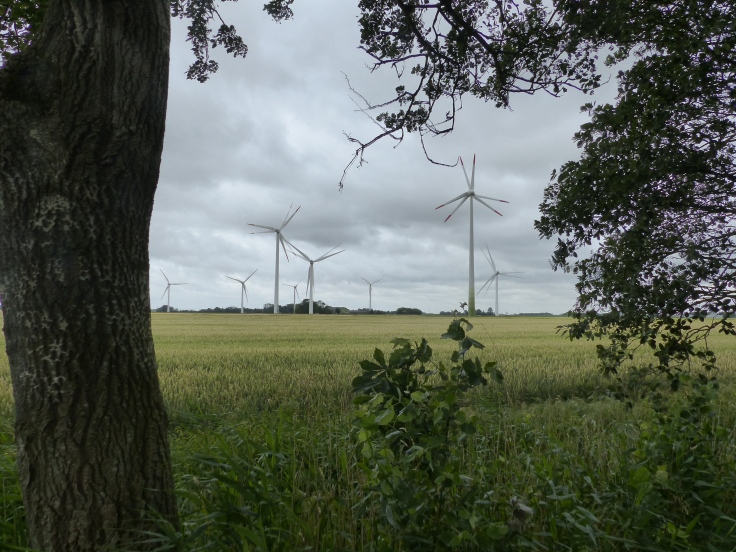 Our route today was a freestyle one. We’d decided to abandon the offical route and make up our own instead. We like going through little towns and seeing different places, which the route we’d been on hadn’t really done. So, we made it up ourselves today and decided to put Heide on our course. Not quite the same spelling, but close enough to my name and we missed going to Heidiland in Switzerland, so we pedalled through Heide and then stopped for lunch beside a pond in a little park. It was still cool and chilly sitting in the wind, but it wasn’t raining! Silver lining! 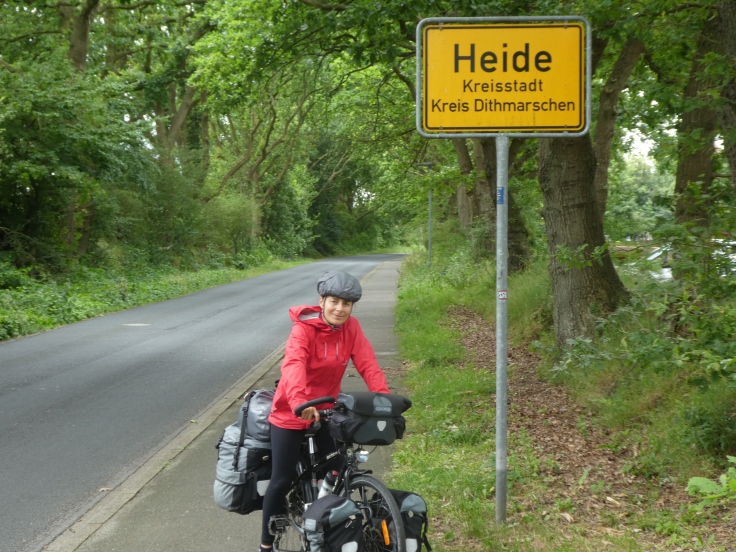 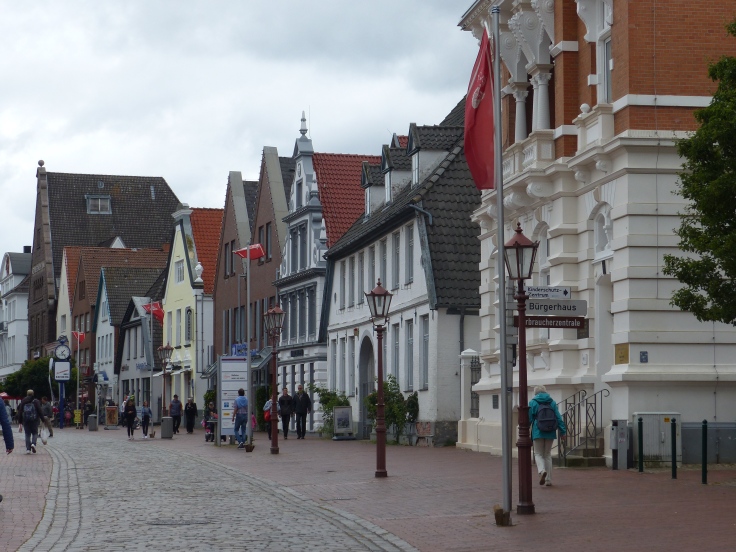 The onward ride put us beside a busy road, but we had our own path again, so we were clear of the traffic and pedalled on in the wind. We rode into Meldorf, our pitstop for the day. No campsites around, so we’re back in a room for the night.

“I’m looking forward to one night behind solid walls out of the wind,” commented Steve.

The bikes were given a small garage for the night, we lugged all our panniers up the steep, narrow flight of stairs to the room, settled in and then went for a walk through town to gather supplies. It had warmed up a bit and the rain had stopped, so it was just the persistent wind that accompanied us.

Another blustery, rainy, chilly day in the bag. We got through without scaring anyone with our remarkable sense of style, or at least we didn’t see anyone faint or ask us if we needed the assistance of an emergency stylist. We are reminding ourselves that it is still summer, because it isn’t feeling very summery at the moment. We have the glorious memories of our hot days, not so long ago, to remind us of summer days in the blazing sun. Maybe they will come around again. If not, we have the gear, we are ready for the chill, we are ready for the wet, we are ready for our Vogue cover shoot…socks, sandals and mushroom heads soon to appear at a fashion show near you! Watch out Paris Fashion Week, there’s a new trend a comin’!

Time in the saddle: 3 hours 39 minutes

Weather: cool, chilly, drizzly, then rain, then drizzly, then not, very, very windy, eventually made it to 17C on the ride and then 20C in Meldorf 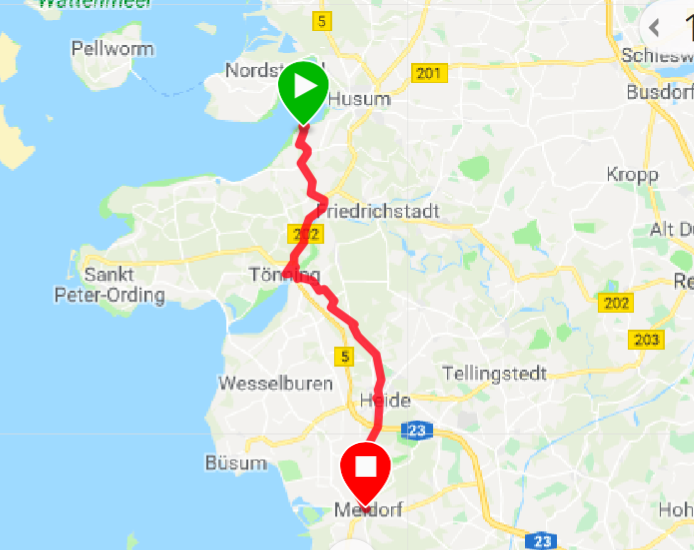 7 thoughts on “The Weather Brings Out The Fashion Statements”