We had a few extra turns, backtracking and assistance from helpful strangers again today. We may have left the umleitungs behind in Germany but the omvejs found us in Denmark. It was a detour day.

We packed up under another blue sky, with those spectacular wispy clouds scattered overhead. The morning was warm and it felt like it was going to be a hot ride.

We pedalled out of Nykobing, along bike paths and bike lanes, with our own set of traffic lights and our route signs to point us in the right direction. The official route had us backtracking the way we’d ridden yesterday, so we followed a different route and began our onward pedal. This had us beside a busy road, which wasn’t great, but we were on a separate path and we had some fields to look at and that amazing sky. Then the path ended and we were on the road, in a lane which wasn’t much more than a shoulder on the side of the road, but we were making good progress and speeding along, with “Road Runner” legs on the pedals.

In the distance, we spotted another touring cyclist coming towards us. She was older than us and had a similar sized load, which we don’t often see. She had front and back panniers and a rack pack over the back and she was pedalling along that busy road on the opposite side to us. Then all of a sudden, she whipped out a camera and took our photo! I was so impressed at her ability to stay in the shoulder on the side of the road, with oncoming traffic and ride with one hand, while looking through the view finder of a camera, to take a snap of us. Maybe she was a retired paparazzo and she’d mastered the technique of riding one handed while looking through a lens. We’d been papped! We waved as she went past and she waved to us and it was nice to see a fellow cyclist on wheels as loaded as ours.

Our route was taking us through Vordingborg and we could see the bridge up ahead, that would take us over the water. We are learning Danish geography as we go, realising that Denmark is not just one large country, but a country that’s made up of a series of smaller islands, which means bridges and ferries to get to some places. Today, it was a very long bridge that we’d have to pedal across to continue on our way. We neared the turn onto the bridge and then…oh no! We thought we’d left these behind! We’ve had enough battles with German umleitungs, we don’t need Danish detours as well! There it was though…an omvej.

The bridge was closed, the detour sign pointed us straight ahead, so we pedalled on.

“We need to be over there though,” Steve said, pointing across the water.

“They wouldn’t detour us to somewhere we can’t get to,” I said, “maybe it’s taking us to a ferry or something.”

Steve saw a sign to a road that looked like it was an alternate crossing, but it had a bike sign with a line through it, so no cyclists allowed.

We stopped and looked at the map. There didn’t seem to be another way across the water. We pedalled on regardless. It didn’t feel right. We were now on a single lane farm road. We looked at the map again. We were actually heading away from where we needed to be. This couldn’t be right. We turned around and saw a man walking his dog, coming towards us. We stopped and he spoke English, so we asked if he knew how to get across with the bikes. He immediately began explaining the alternate route and told us if we went back the way we came, we would see where the cars were crossing and next to that we would see a bike path to take us across. We thanked him, u-turned and pedalled back up the road. Sure enough, we found the bike path crossing an alternative bridge. Why hadn’t we seen that? We should have spotted that. Too busy with eyes front, intent on following the detour to put eyes to the side and see the bike path.

We now had a way to get across to Vordingborg, so onto the bridge we went. It was about a 3km long bridge, so to have water below us for that amount of time was pretty cool.

We made it across, we’d conquered the detour and we were good to go. The route did a dog leg turn and we had to go back under the road. We readied ourselves for the turn and…you wouldn’t believe it…blocked. Another barrier. Another detour. Fair dinkum!

It didn’t actually tell us where to go, but we’d seen another cyclist below us as we came off the bridge, so followed where we thought he’d come from and managed to find a path that took us where we needed to go. The detours were really honing their party tricks on us today.

We stopped for elevenses beside the water in Vordingborg and recovered from the detour shenanigans.

We pedalled on, and pedalled…up! A hill! In Denmark of all places! A hill I tell you! Having just been through yet another detour challenge, we now found ourselves with some hills to climb. We were on fairly quiet country roads now, but we were faced with quite a few inclines for the rest of the ride. We stopped at the top of the first one for a bit of a breather.

“I thought Denmark was supposed to be flat,” commented Steve.

Yes indeed, we were expecting to tootle along on flat paths, as easy as you like. We’d even been told by other cyclists that we were in for “easy flat” riding. Well, I think we’ve been the victims of false geographical advertising! Denmark is not all flat! Our geography lesson continues!

We rode through farmland, with the landscape of green waves and the vast sky giving us a real picture to look at. Then through some sections of forest and we had some flat bits, some hills and some downhill free kilometres too. So, let’s call it undulating. It was an undulating ride! 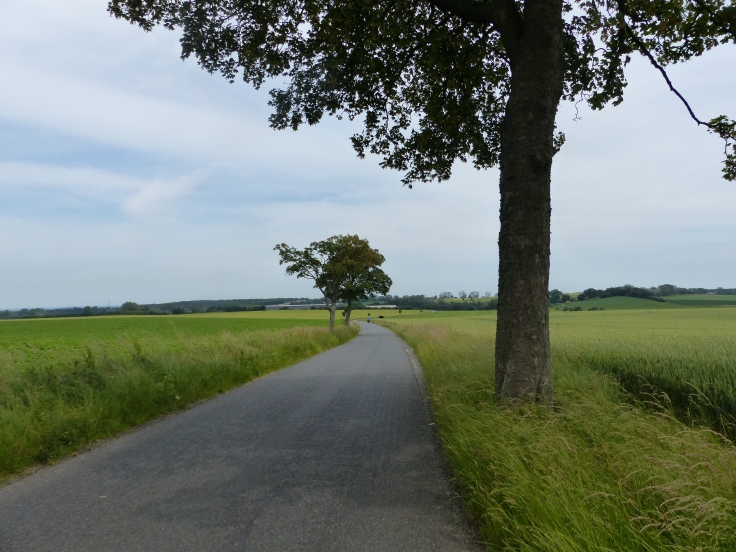 We stopped for lunch in Praesto, beside the fjord. We’d originally thought Praesto would be our pitstop for the day, but it was only lunch time and we’d knocked out about 50km, so we decided to push on. In Praesto we also met another touring cyclist who we’d been playing cat and mouse with since Vordingborg. We saw him just before elevenses, on a bench taking a break and said “Hej”. Then he passed us on the hill out of Vordingborg, then we passed him further along, when he was stopped on the side of the road checking his GPS, we exchanged “Hej” again. Then further up the road, he passed us again and we were smiling at the back and forth passing game we were playing. When we rode into the outskirts of Praesto, we stopped at a supermarket for some cold water and he was there as well. He was from Germany, on a three month, 7000km ride. “I’m sure we will see each other again,” he smiled as he pedalled off. He’s sure got some speed in those legs to be knocking out 7000km in three months!

The onward ride had us beside the water for sections, then some more hills. The hills weren’t mega but they were enough to have us working the gears. Then invite a head wind to the party and it was quite enough thank you very much. The wind didn’t let up and our speedy start to the day had well and truly ended. It was a bit of a slog at times, pushing against the wind, then we’d get another incline and the gears clicked down and the legs pushed hard. 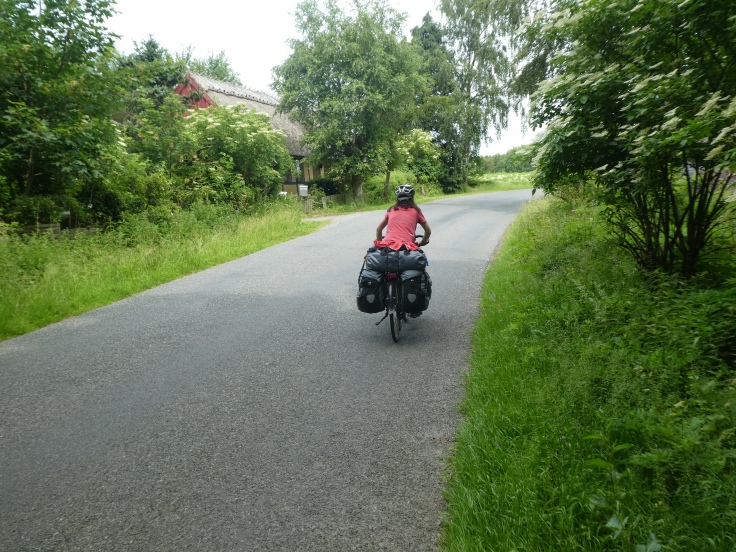 We came into Faxe Ladeplads, beside the water and decided to make this our pitstop. We found a campsite, pitched the tent, boiled the kettle for a post-ride cuppa and then walked back into the little town to get the day’s supplies. As we strolled along I asked Steve, “So did you enjoy today’s ride?”

“Except for the hills,” came the reply.

The Big Fella was feeling like he’d been scammed on the flat Denmark story!

We picked up what we needed from the supermarket and we are discovering that Denmark is a very expensive place to be. It could give Switzerland a run for its money, as far as being a pricey place to visit. Very different from Germany and other places we’ve been and the checkout rings up much bigger numbers here, even accounting for the fact that we pay in Danish Krone and not Euro, after doing the conversion it’s a much more costly shop.

Supplies were gathered, I was ready to hit the shower and I feel I need to share this experience. I don’t tend to write about bathroom experiences and the bathrooms we’ve had at various campsites have ranged from the luxurious, as was the bathroom block at Bad Gogging, which wouldn’t have been out of place in a four star hotel, to others which I can only describe as “character building.” Then there are those that are just challenging. Where we are at the moment falls into the latter category and I think I’ll break with my usual avoidance of the subject and tell you about this one. The shower arrangement involved the payment of the equivalent of $1.50 for five minutes of hot water. Our previous campsite also charged for hot water, with a five minute limit. It had a swipe card and I had to tap the card on the touch pad before getting in the shower, which started the hot water and then it stopped after five minutes. Here, I needed to insert a token into a box beside the shower, this started the hot water and I had five minutes before everything went cold. The challenge was this…this shower was not designed for a short person. The shower head was at a fixed height, that I couldn’t lower. When I inserted my token, the hot water came on and the flow of water was a jet force burst that didn’t aim down, but instead went straight onto the opposite wall of the shower, above my head. Now, bear in mind I have five minutes to get wet, soap, shampoo, condition and rinse, before the hot water shuts off and now I have my precious hot water hitting the wall, above my head. So there I am, on tip-toes, with little hops up and down, trying to get my head in range of the jet of water, which has a force that’s enough to knock me off my feet as well. All the while, the clock is ticking my five minutes away. I did succeed, with some toe-standing and hopping up and down, but it was a final little challenge to round out the day. The adventure doesn’t end on the road!

It was a day with its ups and downs…quite literally. We had some hills and we also had yet another detour challenge, some barriers and road blocks and some wind, but we also had more lovely scenery, helpful and friendly people and glorious sunshine again. So it was another top day. I’m loving the scenery of Denmark, the people are really friendly and it’s been a great introduction to a country we hadn’t visited before. What does tomorrow have in store? There’s always an adventure around the corner…on road and off!

Time in the saddle: 4 hours 41 minutes

Weather: windy, sunny, windy, warm, windy, 26C with a it of wind about.

2 thoughts on “The Danes Do Detours Too”