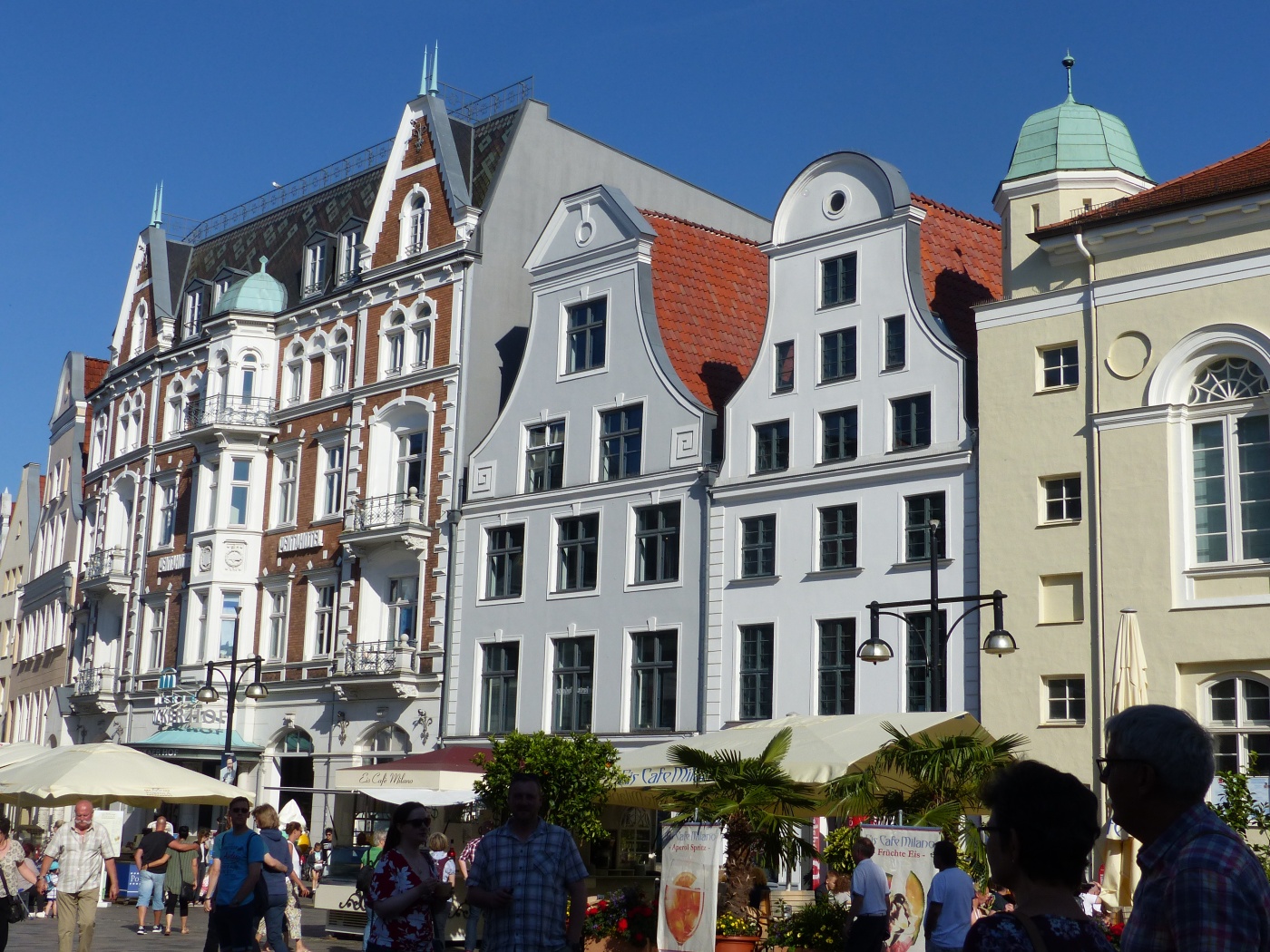 We’ve been in Germany for almost a month. We’ve done and seen and experienced some amazing things. But…time to go. Time for new adventures. Time for a new country. Time to move on.

We did the maths. We looked at the time we had left to see Denmark, The Netherlands and make it to our ferry on time to leave for England. We crunched the numbers. We weren’t going to have time. If we rode all the way from Berlin, we wouldn’t make it in time. So…time for a jump. We decided while we were in Berlin and had more options for travel, we would take the opportunity to move on to Denmark, so we could explore there, ride into The Netherlands and make it to the ferry. So, the decision was made.

We said farewell to Lisa, said farewell to Berlin and rode to the Berlin Bahnhof. This train station is the biggest in Europe, so we psyched ourselves up for another railway challenge. We walked the bikes through the crowded interior of the huge building, bought tickets and made our way to the platform, which was down two levels. We found the elevator… “out of order.” ‘And so it begins’, I thought. Thankfully, we located another one and in shifts, made it down to the platform. There were people everywhere waiting for our train and lots of bikes. We weren’t sure we were gong to fit on. It’s pot luck where we stand, as to how far we will be from the bike carriage. As the train goes past, slowing to a stop, the carriage could be all the way at the front and we have to sprint up the train to get on. Or, it could be at the back or somewhere in the middle. We never know. We stood, we waited, the train came in, the carriages whizzed past us, I saw a bike symbol go by, another one and it wasn’t looking promising. Then, the train came to a halt and a bike compartment was only three doors away from us. We power walked through the crowd as best we could and actually managed to get on. A huge sigh of relief. We really wanted this train because it was direct and we wouldn’t have to change at any station. We were on, we could settle in for a couple of hours. We were on our way to Rostock.

We pulled into Rostock station, rode to our hotel, where we’ll stay for the night before catching the ferry tomorrow and then went out for a roam. Rostock looks like a lovely town, beside the water, with beautiful buildings and cobbled streets. 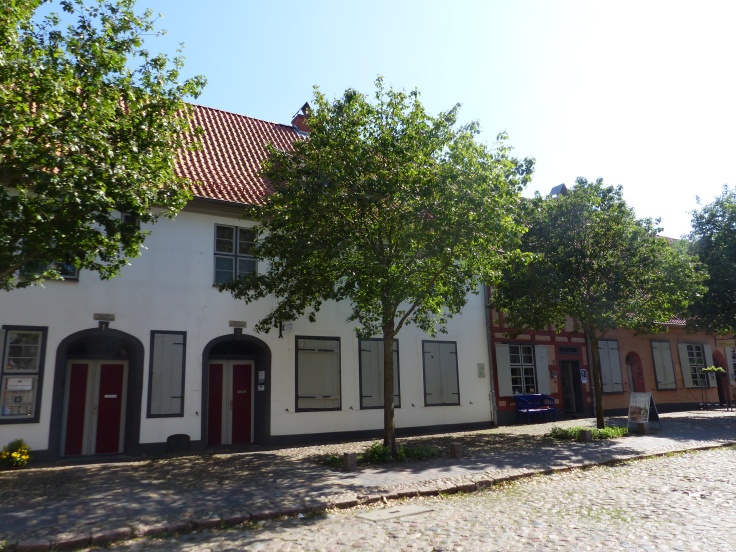 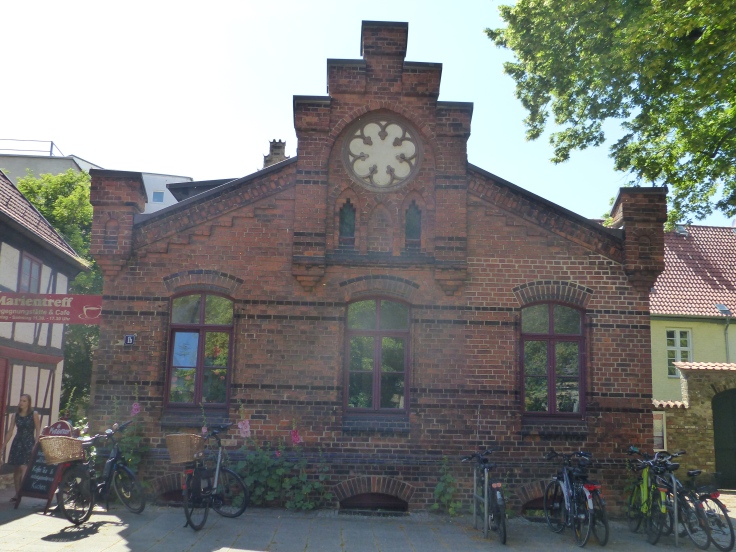 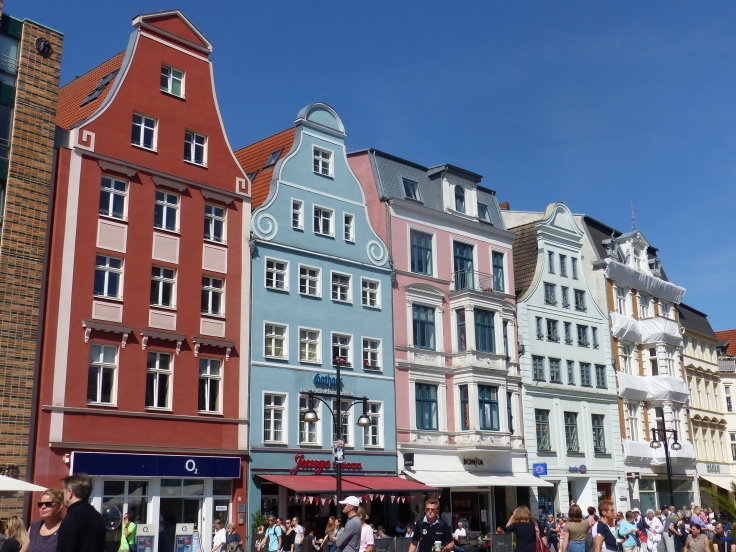 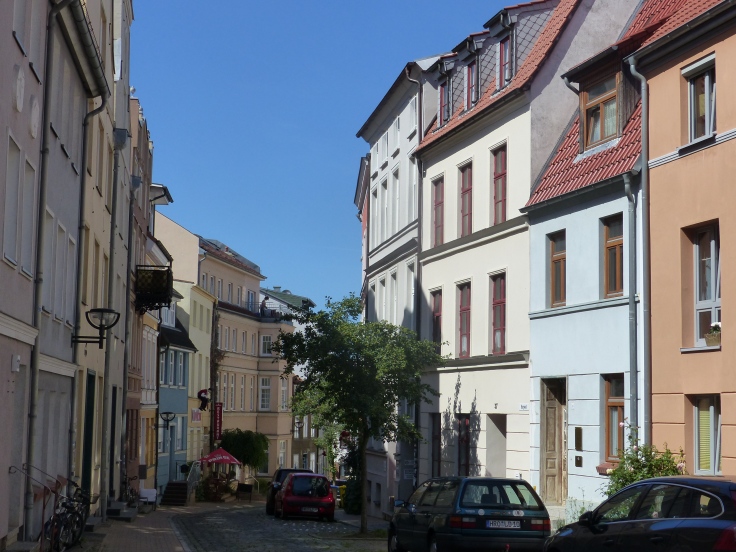 It’s a university city and day two of a Summer Festival was in full swing, celebrating 600 years of the university. Music played, people ate copious amounts of ice cream, children played, people danced and it was a great atmosphere. We roamed the medieval streets and it really is a picturesque, pretty town, which dates back to 1161, with a lot of sculptures around the streets, the water on the edge of the city and lots of green, with trees and parks around the edge of the ancient city walls. It’s an important part of Germany’s history and was an important trading centre and one of the first Hanseatic cities. The Hanseatic League involved the co-operation and mergers of merchants so they could promote their trade with other countries. It also developed contracts with nearly two hundred different sea and inner cities, of which Rostock was one. In more recent history, being a port city, it was heavily bombed during the Second World War with twenty one air raids being carried out on the city.  Then, just this year, in March, 10,000 people were evacuated from the city because a 250kg bomb, remaining since WWII, was discovered during construction work in a busy street in the city centre! It’s a place with a few stories to tell! 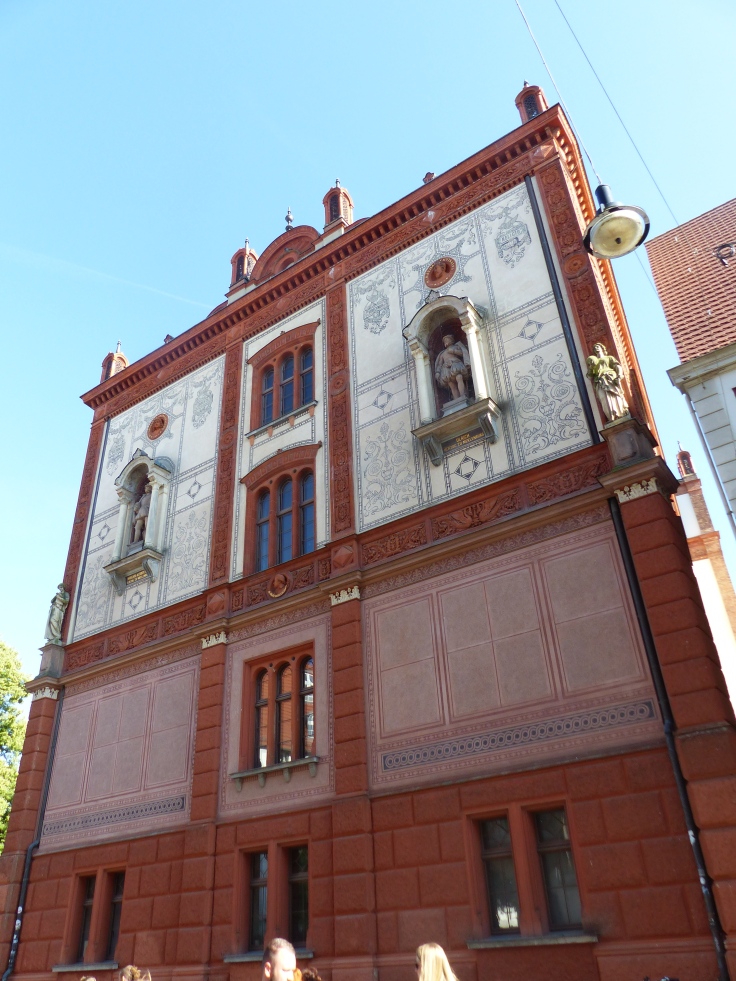 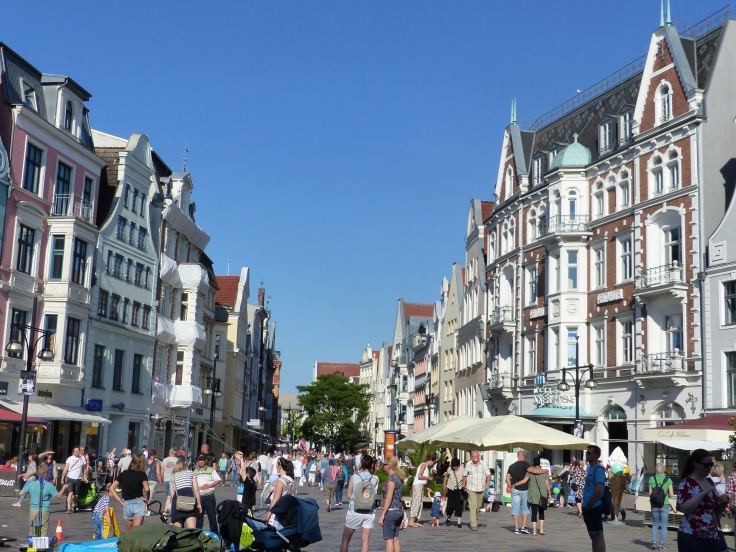 The sun shone and it was a pleasant roam around the pretty streets. Then we stopped on the way back to watch a band because the audience were cheering and clapping and it seemed this band must have been the headline act. I moved through the crowd to watch and boy, did it put a smile on my face. The band finished and the crowd cheered for an encore, so they came back on stage, the drummer started, the others joined in and the lead singer grabbed the mic stand and they were off! What made me really love it though, was the band were all in the upper years of 50 and the people in the audience that were in a frenzy of excitement, with cheering and clapping, were all in the over 55 age bracket. It was such fun to watch. It was something akin to Sherbet or Skyhooks (in the Shirley days) appearing today and middle aged folks with middle age spread whipping themselves into a frenzy, as if they were right back in the Countdown studio. It looked a bit like that. It was great. I smiled and I clapped and everyone was having such a good time with these “classic” rockers! 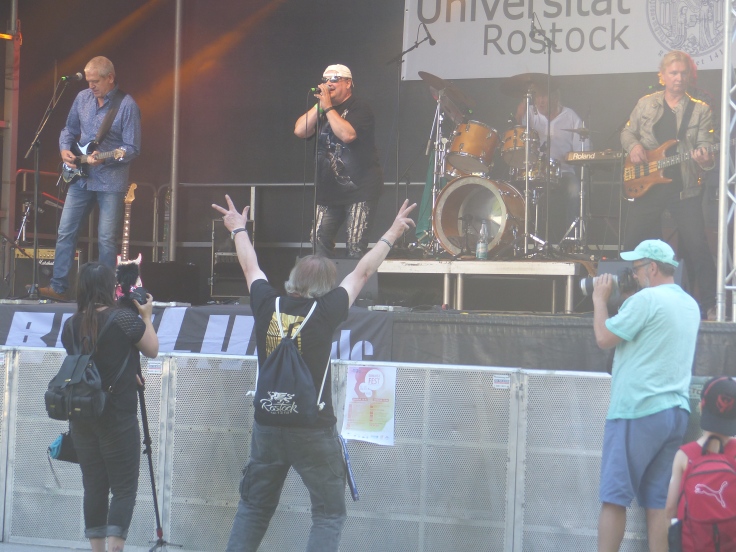 Time in the saddle: 17 minutes