“There’s a nip in the air,” was Steve’s comment as we sat in our jackets eating breakfast.

Yes, it was certainly cooler this morning, one could even say chilly. After the heat of yesterday and a warm night, the morning was grey and nippy.

We packed up and pedalled off, back towards the wheat fields, before riding along a cobbled street, through another collection of houses. The storks were going about their morning preening and getting ready for a day of nest sitting. I love that there are towers placed around streets, with a platform on top for storks to build their nests. We had guessed they were specifically there for storks and then saw a sign beside the river with information about various birds and we saw the pictures of the towers, so that’s what they are, custom made and provided as stork accommodation. What a nice thought. We passed a couple of them as we wheeled along on a chilly, grey morning.

Before long we passed a small sign for a detour. This one though, was a sticker placed on one of the route markers and since it wasn’t an official looking sign, we decided to treat this one as a suggestion rather than a command, so we ignored it and continued up the road, where we came across more route markers, so figured we were still good to go.

We passed quite a few cyclists today, most of them in groups, more than we’d seen for a few days. We all exchanged cheery greetings and we received more than a few raised eyebrows and exclamations at what we were carrying, compared to the single pannier most of the passing pedal traffic had attached to their bikes.

It wasn’t long before we saw it. The yellow sign. The official yellow sign with that dreaded word. Umleitung. Detour. Seriously, we have had more than our fair share of these! Some of them have been straight forward, others have been tricksters. What was this one going to do? The detour told us we couldn’t go down the regular traffic-free cycle path, which had a barrier across it and instead it directed us to the main road. We stopped. Steve reached for his helmet. OK, time to get serious now. I reckon it’s at least a month since Steve last wore a helmet, but out it came and on it went, because we were about to hit a highway. While we were stopped, a man pulled up beside us in his car, rolled down the window and said something to us. I was about to do my usual apology, when he spoke again and pointed to the main road. “Ja,” we said and he waved and drove off.

“What do you think that was about?” I asked Steve. I wasn’t sure if he was telling us the way to go or telling us we shouldn’t go on the main road.

So we turned onto the main road and went for it. I belted along as fast as I could, hoping there would be a turn off before too long. Thankfully, being Sunday, there wasn’t too much traffic and then up ahead we saw another yellow sign. It was giving us an arrow to turn off the road and onto a path. Thanks for comin’! I breathed a sigh of relief and we got off that road.

The traffic free path continued and we tootled along, until…there it is…a glimpse of yellow in the distance. Another one! This time, there wasn’t just one, there were two detours. Two signs. OK, you befuddling umleitung! What do you want us to do!? I know if you could smirk, you would be! What fun you gang of detours are having with us. You are all paid up members of the Society for Dastardly Detours and at your recent AGM, you clearly nominated us as the targets of fun and games for this month! So…do we go right? Do we go straight on? Fair dinkum! Oh, whatever…we went straight on.

We found some more route markers, so our guess had paid off and we continued following our green signs. A lady passed us walking down the street and she smiled and gave us a “hallo”, which we returned, as we pedalled on. Then, even the friendly, green cycle route markers decided to have their own fun. There was a route marker on the other side of the road, with an arrow painted on the path directing us there, with a right turn. But…there was also a green arrow on our side of the road, pointing straight ahead. They were both telling to go much the same way, but one was saying stay put and the other was saying to cross, so that path might take us somewhere else. We stopped, we pointed across the road, then we looked at the sign on our side. Then we heard, “Guten tag” behind us. We turned and the same, smiling lady who had just said “hallo” to us, was walking back up the street, telling us something and pointing straight ahead. She must have seen us stop and thought we looked confused, so she headed back in our direction to help. We thanked her several times, waved and continued on without crossing the road. Yet another friendly, helpful person had come to our assistance.

It seemed we had finally conquered the detours and signs, because we had clear air now on the path and wheeled along, without puzzlement or confusion confronting us. Then, we even saw the river again. The Elbe presented itself and we had it beside us only briefly, but it was nice of it to join us again for  while. 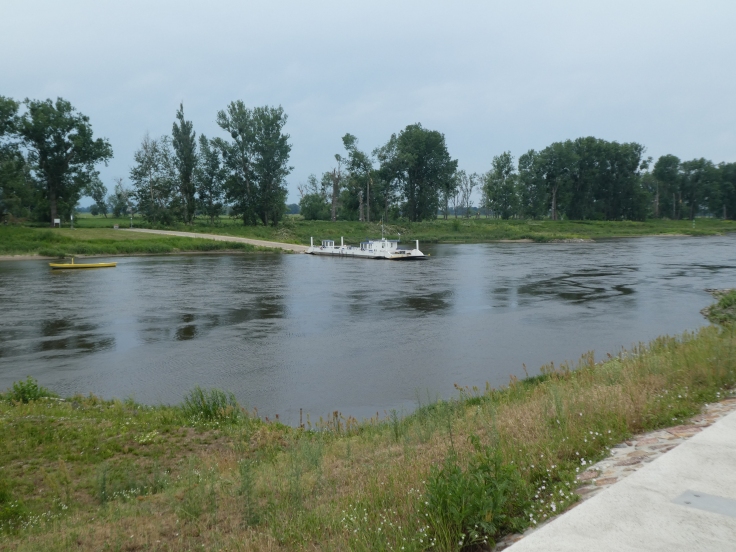 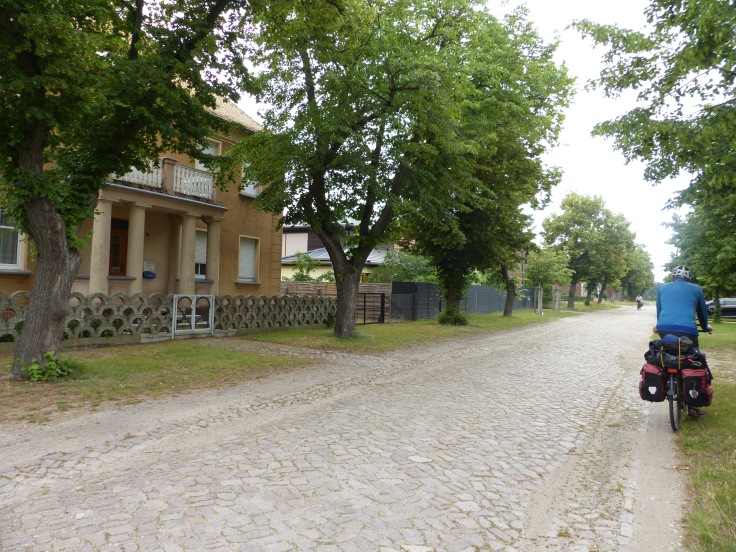 Just as we were on the outskirts of Lutherstadt Wittenberg, the first spots of rain hit us. Then the spots became spats and the spats became drops and we passed a group of cyclists who had stopped to put their rain coats on. We were about to do the same, when we came across an A-frame shelter just in the nick of time. The bikes fitted in, we fitted in and we could have elevenses while we sat out of the wet.

We’d decided to stop in Wittenberg and have a shorter day. The thought of rolling into a campsite, pitching and then having an afternoon for a bit of R&R, some research and doing some maths about our forward travels, calculating the distance between places and the time frame we have left for the ferry to England. So, when the rain eased a little, the Orange Wonder and Nora were called into action and we set off for the final few kilometres to our pitstop.

This time we crossed the Elbe, over a bridge and wheeled into our final destination, as the rain stopped and just the grey sky remained. We’ll take that. Then it was time for a cuppa, some map reading, some app searching, some ideas that were verging on planning, before Steve took himself off for a snooze. A relaxed Sunday arvo.

It was only a short ride today, but we still had some curve balls. Those detours again, just to mess with us, then a bit of rain, just to remind us again of what our superpowers can do and not to get too complacent about all this sunny weather we’ve been having. We had some quiet countryside and a glimpse of the river, some more friendly people, all topped off by a less rushed end to the day. From here we turn away from the Elbe and begin to make our way to Berlin. That’s unless we get some more detours, in which case we could be anywhere. Turn left? Turn right? If you get to Lithuania you’ve gone too far!

Time in the saddle: 2 hours even

Weather: cool, grey, some rain, then it brightened! 22C 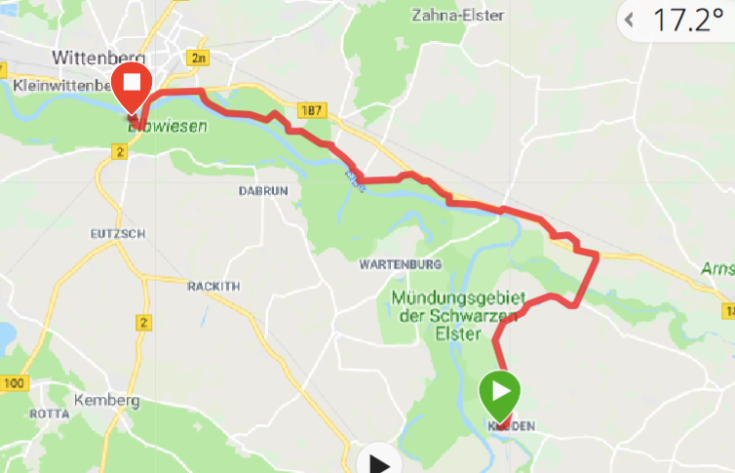