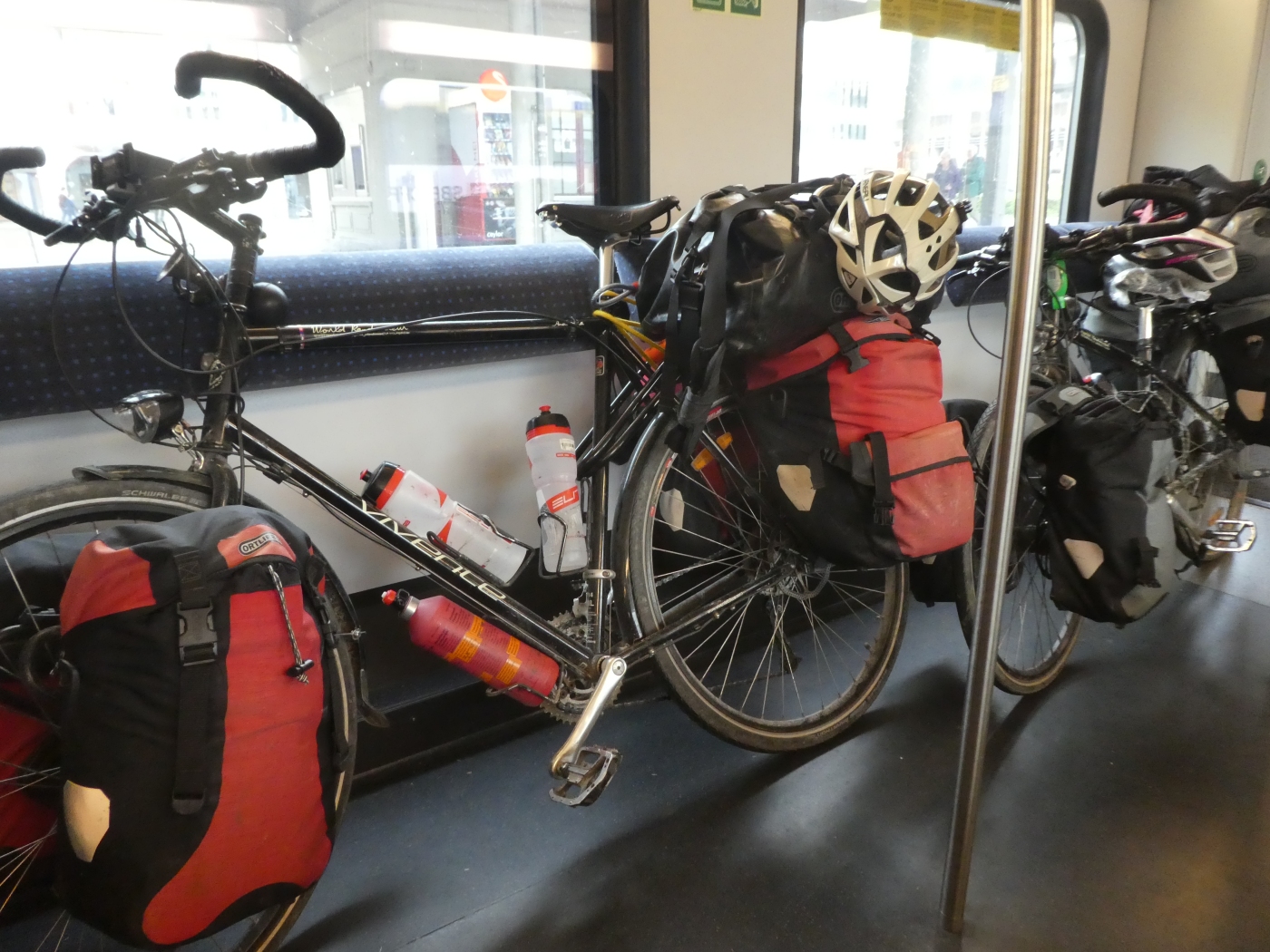 Today was the first leg of getting to our final destination. It was a long day. It was a day on trains. It didn’t always go to plan. This is the condensed version of how it unfolded.

We found a train to Frankfurt, that was direct from Basel, so no changes, no having to rush on and off the train, no having to navigate our way from platform to platform with the bikes. Winner.

So…we pedalled off to the station, in the rain, ready for a nice, easy, three hour trip to Frankfurt.

But…when we went to buy our tickets we were told the direct trains were all booked out.

So…we had to take regional trains and we now had 4 changes along the way.

Then..we walked to the platform and waited for the first train from Basel Main Station to another station in Basel. Thankfully, we could walk the bikes straight on the train and we were away.

Then…we arrived at the station and set off to get to the next platform.

So…we missed the train. We had a tight connection and the time it took us to bump the bikes slowly down a steep flight of stairs and haul them up another one, ate up that connection time.

So…we waited for an hour for the next train.

Then…we got the bikes on the next train, walking them on and finding a space for them and we were on our way to Offenburg.

Then…we arrived at Offenburg and had time to get to the next platform.

But…we had more stairs to get down and more steep stairs to get up again. I had a very nice man see me at the bottom of the stairs and immediately took hold of the back of my bike and helped me push it up the stairs. By the time we got to the top, that kind man was very, very, very red in the face. Holding the back of the bike, he was certainly taking the lion’s share of the weight. I was so grateful for his help.

Then…Steve got his bike up the stairs.

So…we both made it up the stairs and got to the train on time.

So…we waited an hour for the next train.

Then…the next train arrived, we could walk the bikes on, we were able to find a space and we were on our way to Karlsruhe.

But…the train kept filling up and we were squished in like sardines and Steve stood in the doorway and I sat on a jump seat near my bike, until the train kept filling up even more and I gave my seat to lady with a pram and I stood by the door, away from the bike, which I’d tied to the wall with an occy strap to stop it falling on a poor unsuspecting fellow passenger and we rocked and swayed our way with our fellow sardines, all squished in together.

Then…we arrived in Karlsruhe and had an elevator to help us get to the next platform.

So…we made the train and we got on board and got a space for the bikes and got a seat for us and we were on our way to Mainz.

Then…we arrived in Mainz and had an elevator again to help us get down off the platform and back up to the next platform.

So…we made the next connection and got on the train and we were off to Frankfurt.

But…it was a bit crowded, so we had to stand the bikes against the wall and stay with them to hold them up.

But…there was  lady standing beside us holding her bike and we got talking.

So…that’s how we met Marcia, who was lovely and friendly and chatty and we talked the whole trip about all sorts of things, our travels, our jobs, life in our respective countries. It put a warm glow on the otherwise tricky train journey.

Then…we arrived in Frankfurt and Marcia led the way to show us to the elevators to get up to the street.

But…the elevators were out of order.

So…we had to use the escalators, that were long and steep.

But…I couldn’t hold the weight of my bike with it tipped up on the steep slope of the escalator.

So…Marcia was an absolute gem and took my bike, while I took her lighter one and we all got up the escalator.

Then…Marcia walked with us to the exit to the street.

But…there was another set of escalators to get up.

So…Marcia took my bike again for me and I took hers and we all got out of the station. We said our farewells and went in our different directions and she was another wonderful, kind, helpful, friendly person that we were lucky enough to meet.

Then…we walked up the street to find a hotel, close by the station. It was now 7pm and we’d started our day at Basel station at 9:00 am.

But…the hotel didn’t have anywhere secure for the bikes, just an open car park. The area we were in, near the station, was definitely the place we wanted things to be secure because even Steve was feeling a bit apprehensive as we walked those streets.

So…we went down the street to another hotel to try our luck there.

Then…we found a hotel that could keep the bikes, still outside and still in a car park, but more enclosed and a little more secure.

So…we finally came to a stop at 7:30pm, after being on trains or in stations all day.

So…we’re a bit knackered and zonked from a long and hectic day and not for the first time I thought, I’d much rather ride the bike than be on rails.

But…this is a means to an end and the journey continues tomorrow.

2 thoughts on “Half Way To A New Adventure”