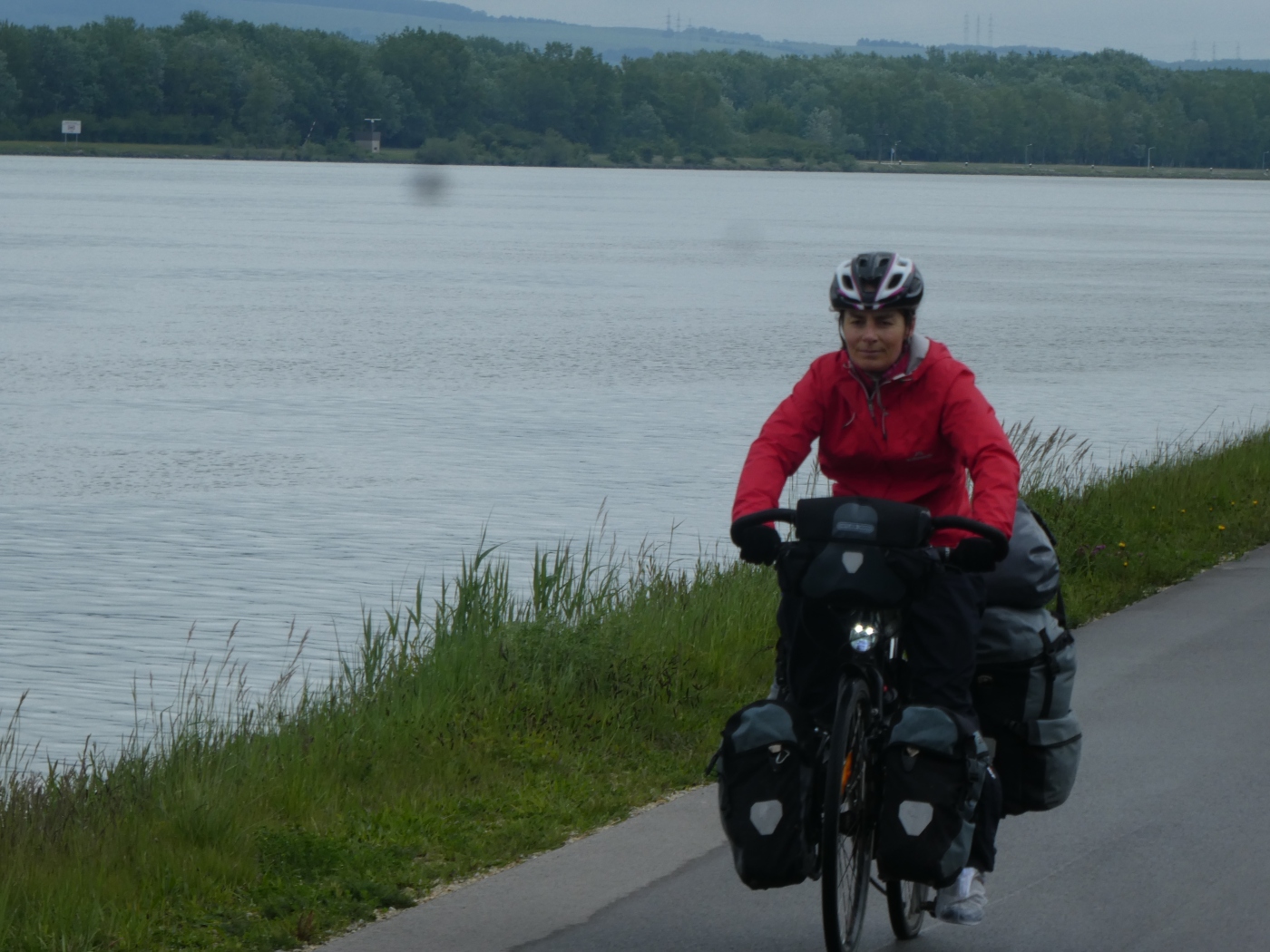 We have now been going for one month. Our first very teeny tiny milestone. Fun fact… in 31 days we have had 15 days of rain! Yep, it felt like it too, 50% precipitation so far this trip. When you travel on bikes the way we do, weather becomes everything. At home, weather is a passing interest, as in how many layers might I need to wear tomorrow? What’s the best thing to wear? Will I be running in the rain? But that’s about the extent of it. Now though, doing this, it becomes something verging on an obsession. That obsession was in focus this morning. It rained. Again. It rained overnight and we woke up to it still raining. We thought we’d only do a short ride, because of the weather and planned to ride the Danube Cycle Path. We figured, since it’s a flat river path, we could make reasonably good time and so decided to leave later than usual to wait and see if the rain cleared. We scrutinised weather maps and rain radar images, in between checking their reliability by gazing out the window to assess the rain situation. We usually get on the road somewhere between 7:30 am – 8:30 am but this morning we hung around until nearly 10:00, waiting, gazing, checking, waiting. Finally, the rain stopped!

We went downstairs to collect the bikes from their storage room and the man at reception asked us where we were riding to.

“Tulln,” we said, “just a short ride today, because of the weather.”

“Oh,” he said, “you should go along the Danube path and when you get to a bridge, turn left, there you will see a train station and they have many trains to Tulln, that will be best I think.” We all had a laugh at that and he made a joke about the amount of gear we were carrying. “Tulln is well known in Austria,” he continued, “it is known as the City of Roundabouts. They have roundabouts instead of intersections and they decorate the centre of them, they are very proud of them and they have a special day where people visit to look at all the designs of the centres of the roundabouts.”

That did sound interesting, but he had just planted a seed of dread for me. Roundabouts. Not just roundabouts, but a “city of roundabouts.” Oh dear.

We rode out of Vienna and made our way onto the Danube Cycle Path, which runs right beside the river. We passed tourist cruise boats, moored beside the path and people were out for a morning walk. One of the boats was flying an Australian flag.

We pedalled along, beside not so much the blue Danube, as the grey Danube. The sky was grey, the water was grey and it was just generally a cold, grey morning.

We stopped for elevenses at a bench in a skate park and I shivered and shivered. My layers really didn’t work today and I was cold all day, cold on the bike, more cold when we stopped and everything was cold, from my hands to my feet and everything in between.

The path was great, traffic free, flat and beside the river. Sometimes we just had the river beside us, sometimes we would have a row of houses to one side of us, which is always interesting to sticky beak at, looking at the different styles and designs. We even passed a pop-up library with a table and chairs if anyone felt like a literary pit-stop.

This is a really popular bike path and apparently it’s absolutely packed in summer. Because it’s flat and long, a lot of families ride it, as well as other tourists. We passed a lot of cyclists today and chose the relatively universal greeting of simply, “Hello,” as we all greeted each other. Some were on their own, like us, and others were in organised cycle touring groups with a guide. Barges chugged beside us, swans paddled and ducked and despite the cold, it was a really nice ride. The path had a lot of benches and places to stop, as well as path-side cafes, most of which were closed, but it’s really well set up for cyclists.

We stopped for a quick lunch beside the river, with boats moored in front of us. I shivered some more and then we set off to our campsite.

The campsite was right beside the path, which was great and we could roll straight off our route and up the driveway of our pitstop. We’d aimed to arrive reasonably early so we had time to wash the tent and get its mould problem sorted. We pedalled in at 2:00, so nice and early to get some jobs done. The only problem was, while the rain had stopped, it had left something behind…mud. Lots of very thick, squelchy mud. The pitches were very wet and muddy, so we decided, reluctantly, not to add mud to the tent’s cleaning issue and get a cabin instead. This worked out well, because we could unload everything into the cabin and then Steve pitched the tent outside to give it the anti-mould treatment. So we still managed to deal with the tent, but had a mud-free place for all our gear while it happened. The cabin was freezing and this is evidenced by the fact that Steve, who is usually turning heaters off, set about turning every heat source available on to full whack, to warm up. It worked and we eventually warmed up and I could stop shivering!

We went for a pedal into the centre of Tulln and what a delightful little town. The roundabouts were scarce, so we’re not quite sure where the claim to fame originates, but in any case, we had bike paths, so didn’t have to navigate a roundabout at all. We saw three, two with a centre fountain and one with a sculpture of some sort of plant. The town was lovely, very quiet, with nice pedestrianised squares, very quaint and pretty. We tootled about to have a look around, saw what looked like the remains of the old town walls and generally admired this little place beside the Danube. 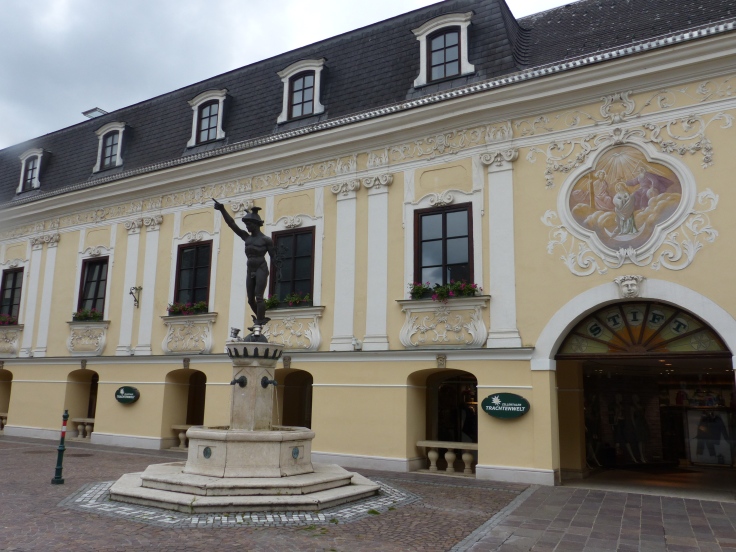 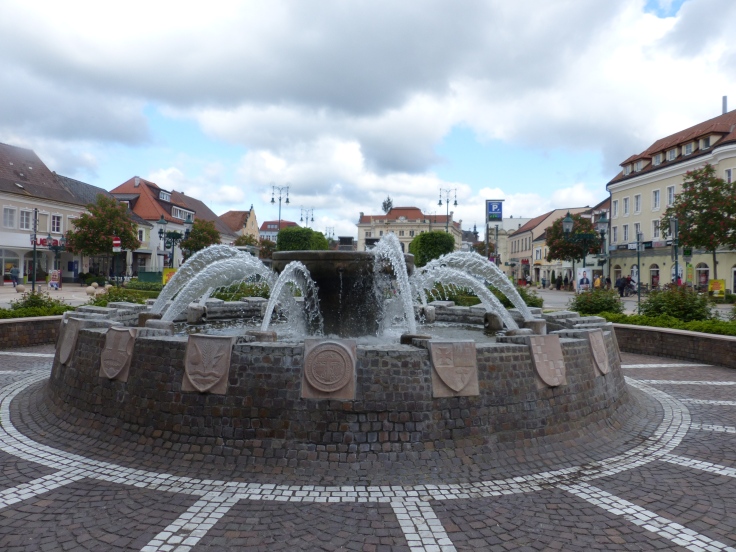 We stopped at a supermarket to gather supplies and when we went through the checkout the lady said something to us. Here I go again…”Entschuldigung, ich spreche kein Deutsch.”  It came out! I actually got the script out in full. The lady waved her hand understandingly and then said, “Sehr gut,” (very good) and pointed to me, telling me I had spoken Austrian and done it well. Very kind and gracious she was. I know I sound terrible when I try to speak the language, but she was very kind and accepting of that fact!

After gathering supplies to cook, we headed back to the cabin and you’ll never guess what happened when we got back…the sun came out! Woohoo!! Steve got to work wiping down the tent and I set about constructing an enormous vegetable curry and that was the day. It was cold but it was a terrific path to ride along. We’ll be on this for a few days now, heading towards Linz. We could get there fairly quickly but Steve made the comment, “This could be the best ride of the trip, so we don’t want to rush it.” So we’ll probably do shorter rides each day, to spend a little more time cruising the Danube in our own two-wheeled fashion. I even saw a squirrel, just for an added bonus. No time to take a snap, but this one looked red from a distance, which would be extra special if we could see one of those again. So, another good day. We had more great experiences, discovered another lovely little town, saw some more special things…just tops! Maybe, tomorrow, if the sun shines again, we might see a bit of blue on the Danube. Maybe. If we see it like that, we might just have to break into a waltz! I mean we can’t ride the Danube without The Blue Danube waltz featuring somewhere. We’d have to give Strauss a little bit of air time surely. Now let me see…a little practise needed perhaps…right…together, right…together, left…together…

Time in the saddle: 3 hours 9 minutes 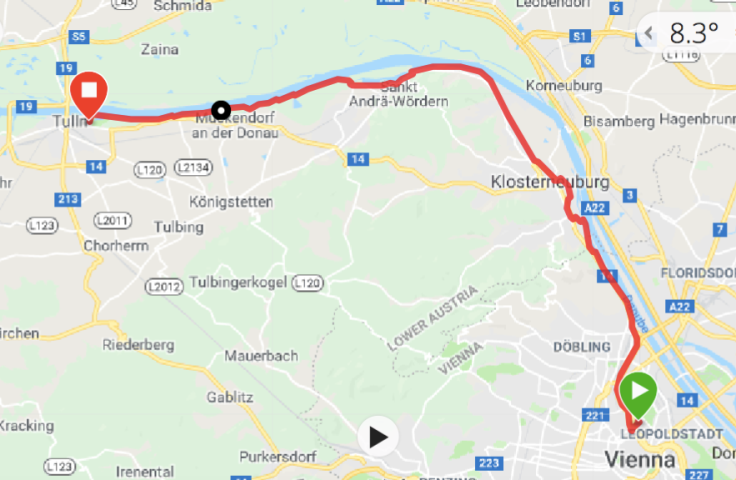