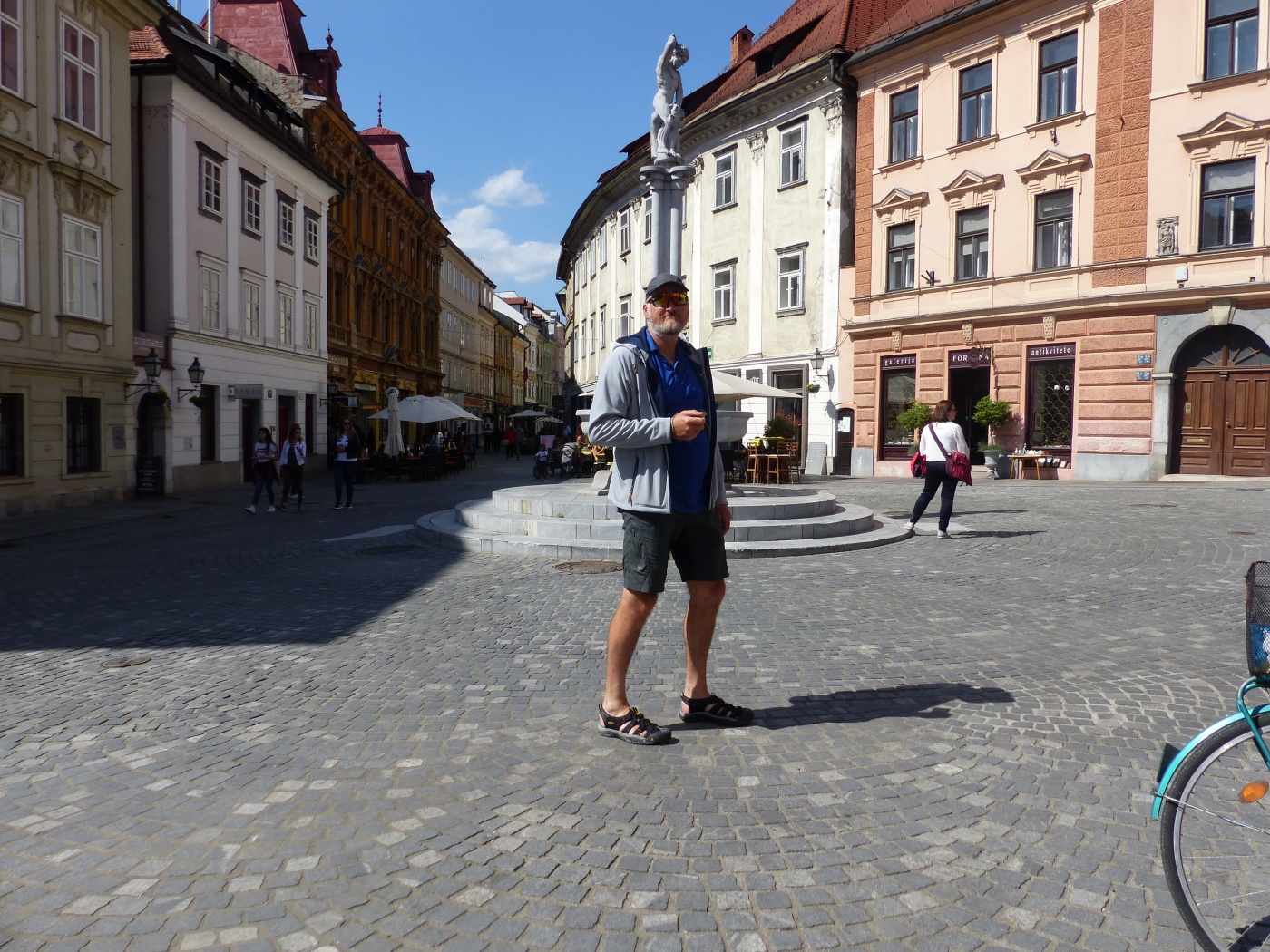 May 2 – Trieste to Ljubljana

Ever gone to a place and instantly felt a vibe, a feeling, a sense that, “this is my kind of place”? Ever experienced that? That’s how I felt in Ljubljana today. Love it!

The day got off to a good start and if there’s such a thing as a perfect train ride with bikes, then that’s what we had. The train started in Trieste, so we had plenty of time to get the bikes on and it was a new train with the door down at platform level so we could just wheel the bikes on fully loaded. Then, the bike hooks were in a section of the carriage with us, so we had room to unload them, hang them up and then sit in a seat in front of them. Sorted! Although, we were glad we got there early to load them on the train because a group of walkers got on after us and promptly put all their backpacks and gear in the designated bike spaces. Please don’t do that. Use the luggage racks! We’ve had to struggle to get bikes in amongst people’s luggage that’s been stored in the bike area before and it’s a real pain!

We settled back in for the 2½ hour journey and watched the scenery go by. The scenery was gorgeous – hills and fields and towns and mile after mile of green. We’d listened to a Rick Steves interview yesterday, talking to  a couple of Slovenian tour guides about their home country and they described the differences around Slovenia, how some parts are more Germanic, others more Austrian and so on. The places we passed on the train today were definitely Austrian in appearance by the look and design of the houses. It was a nice trip that went smoothly. We crossed the border at Sezana and as we neared Ljubljana, we had time to get the bikes off their hook and load them up again in the carriage, ready to just walk them straight off again at the final station. Easy. The only slight difficulty was getting them off the platform, which required taking them down two flight of steps. Steve took his bike down and I started with mine but couldn’t hold it to stop it from getting away from me down the steps, so Steve came back and got it to take it down. As he was doing that, a lady beside me was having trouble getting her big, wheeled suitcase down the steps, so with Steve in charge of my bike, I took hold of an end of her suitcase and helped carry it down, so all travellers managed to navigate the stairs in the end with their various wheeled items making it safely to the ground. That train trip, all the way from Trieste from Ljubljana cost us the grand total of €8.00 each! About the equivalent of $12. We can’t believe they can do it so cheaply. It’s incredible. 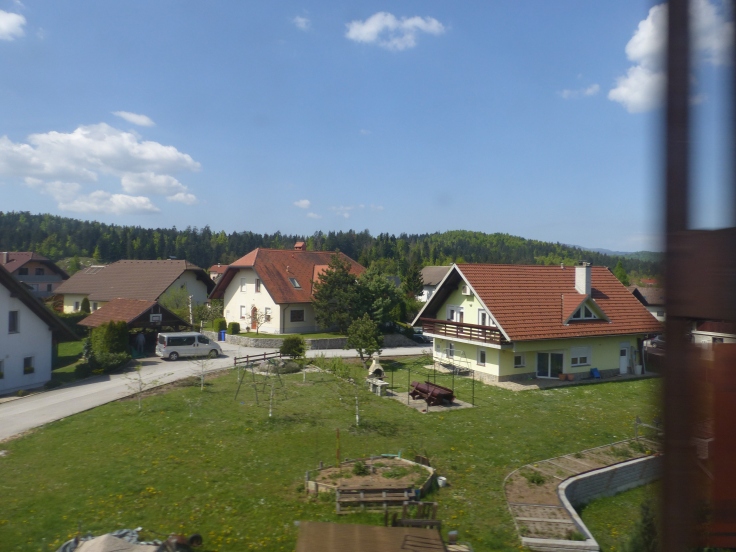 We set off straight onto a bike path. Bliss! The sun shone and we made our way out of town towards a Decathlon store for an emergency replacement mission. Steve broke his spork last night cutting into a veggie burger, so a replacement was needed stat! But darn, dang and blast it if that store wasn’t closed when we got there. We then discovered that today is a holiday too, as a double feature holiday with May Day yesterday. Oh well, the spork mission will have to wait.

We pedalled back into the city on more fabulous bike paths and found a park to have a bite to eat while we waited to meet our host at the apartment we had booked. We found a nice spot on a bench under a tree and were soon joined by another four legged local. This fella was not happy though, no siree. A lady was walking her cat through the park on a lead and it found us and came to investigate by getting under the bench. As she tried to get it out it growled, raoaoaoaorrr and hissed and flicked its tail back and forth. I stood up to take a photo and it introduced itself to Steve and then made a beeline for my capsicum that I’d been munching on. Steve moved to rescue my snack and the lady again tried to bring the moggie to heel. Raoaoaoaoarrrr, hsssssssss, tail flick, tail flick went that puss. It leaned against the lead and didn’t want to budge. It was not happy on that lead. It was angry and annoyed and maybe a tad humiliated to have its haughty character diminished with a harness and lead. It seemed an independent mog that didn’t much like being controlled on a lead and it made its feelings known! The lady asked where we were from and then wished us well and she set off down the path, dragging puss with her, who then thought it might as well exercise a bit of independence and set off ahead of her as if to say, “I will still be in charge of me thank you very much!”

We found our way to our apartment which is on a cobbled street near the centre, met our very friendly and helpful host and then we set off for a roam. I instantly loved Ljubljana. So much of the centre is pedestrianised, so it’s easy to walk around and the river runs through the centre with paths running alongside and shops, bars and cafes all along its length. The buildings are beautiful and the whole place has an eclectic feel – a blend of olde worlde European, with a vibe that’s a bit artsy, a bit boho, a bit funky. It’s a place I could easily spend a lot of time in, it just felt like my kind of place. 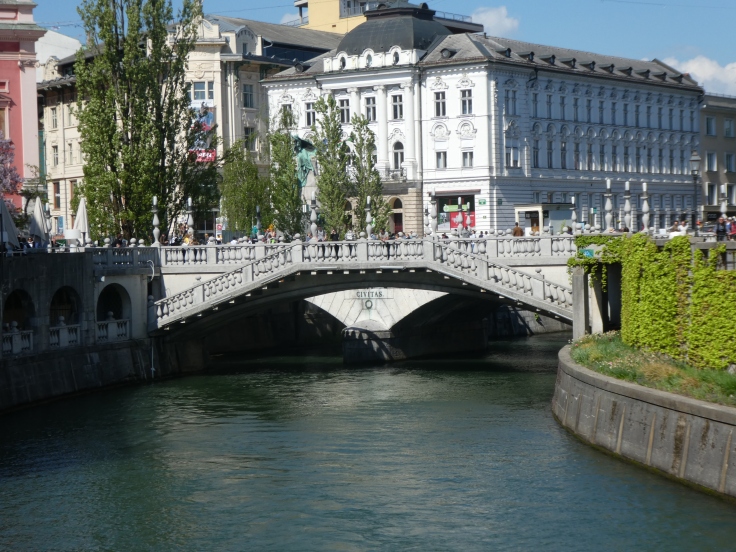 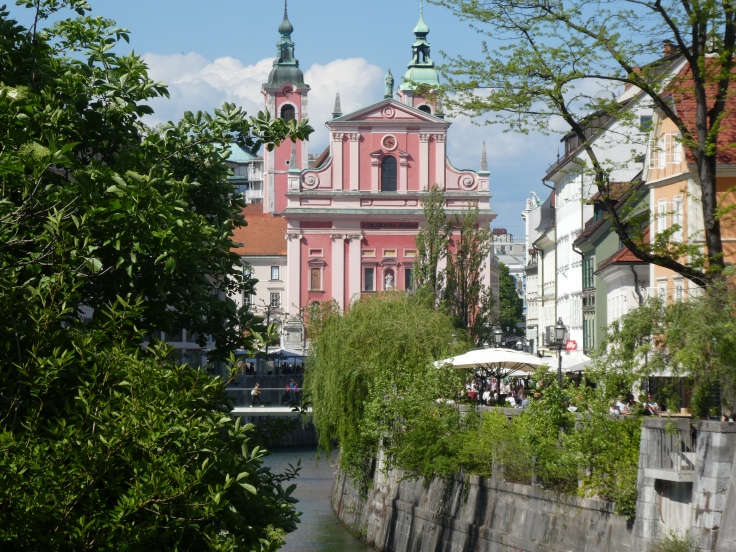 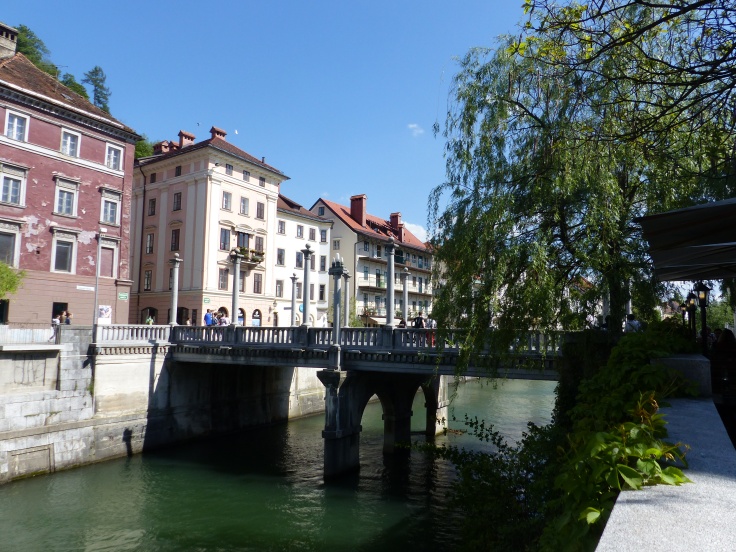 We walked along the Breg, by the river. This, the Bank of the Ljubljana River dates back to the beginning of the 14th century and was the main port for all goods entering the city. 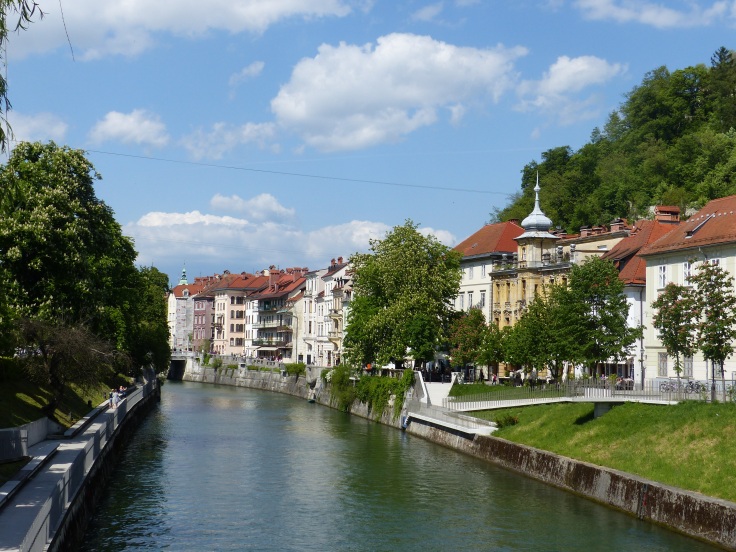 There was a lot of music as we walked around and it was brilliant. One fella was playing guitar on one of the bridges and was playing something quite funky, singing in Slovenian. When he finished that song, he switched to, of all things, “Hello Mary Lou” singing in English. There was a man playing the accordion and another fella who was absolutely fantastic, playing upturned saucepans and plastic jerry cans. The music he made with those was amazing!

It was absolutely glorious strolling in the sun around the streets, by the river and looking at the beautiful buildings. There were also lovely big open spaces and parks and we could see Ljubljana Castle on the hill. It was absolutely gorgeous and I absolutely loved it. Loving Ljubljana already! 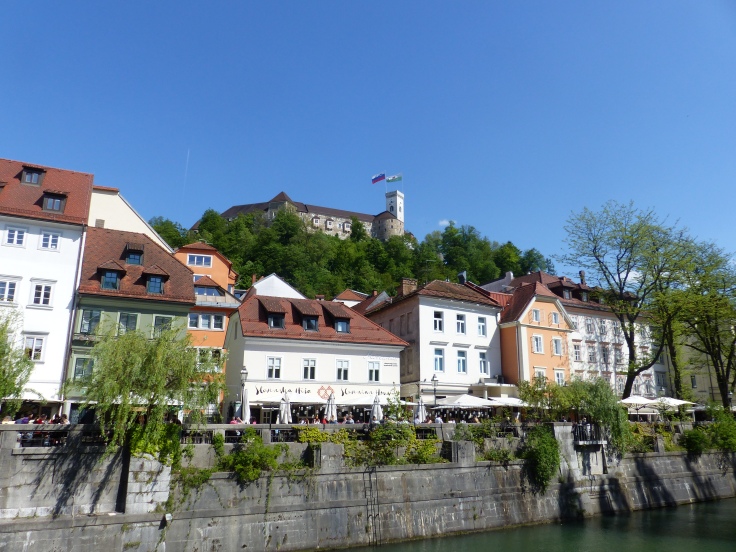 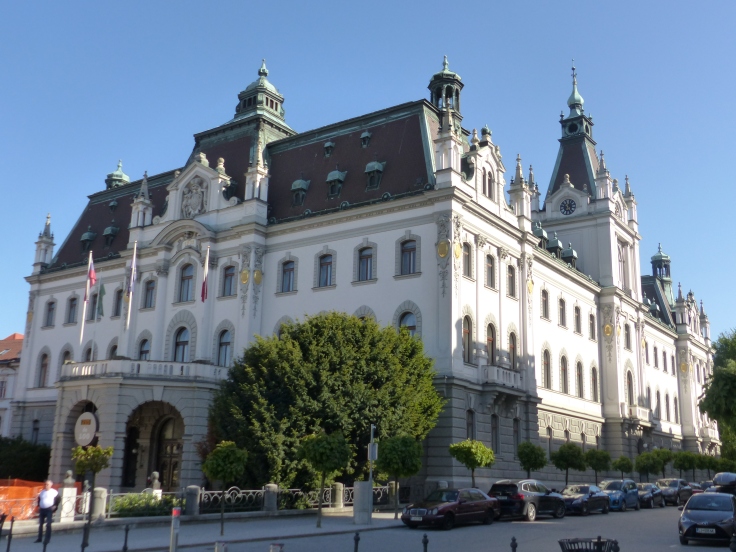 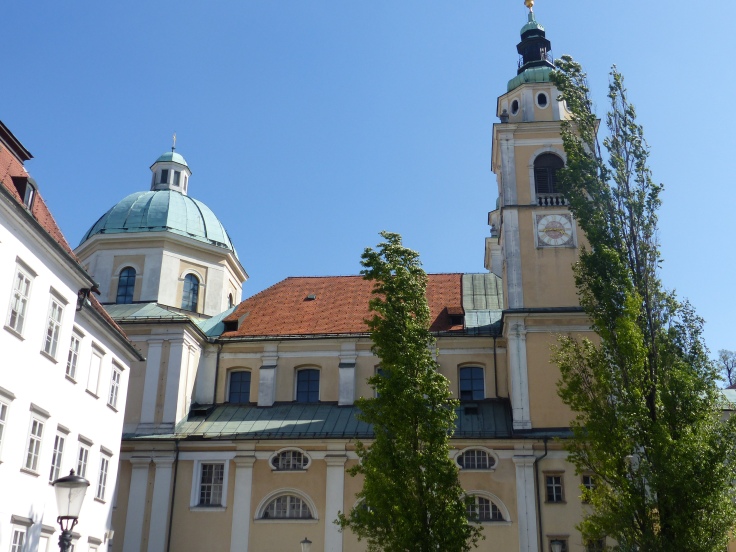 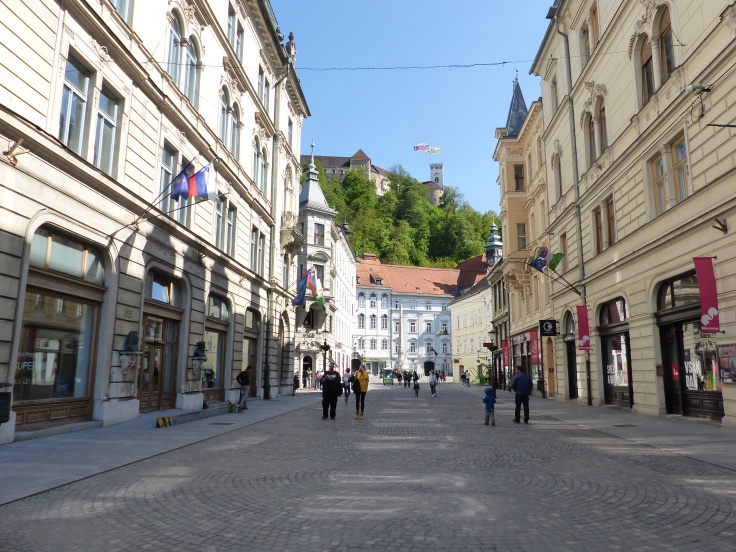 I also saw a couple of things that made me smile. One seemed to be left by a like minded person (not that I’d advocate writing the message on public spaces like that!) and the other was just a good dose of humour! 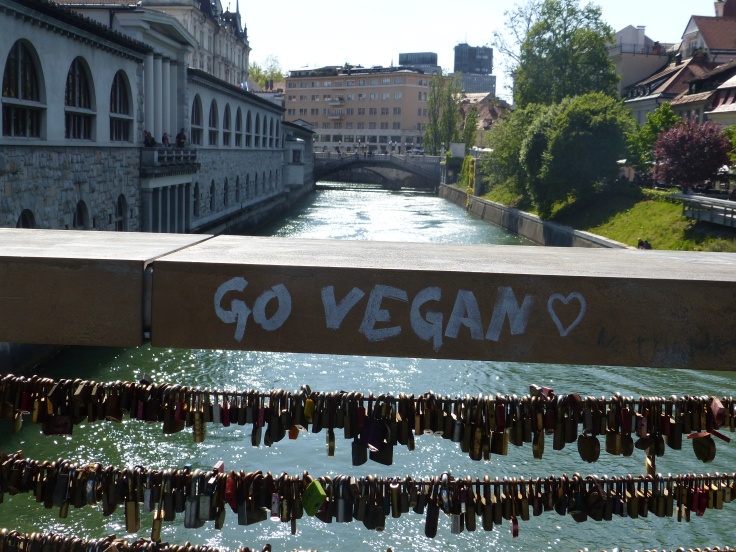 We finished our roam with a sit by the river and Steve enjoyed a beer and I had a tea and it was just perfect. As an avid tea drinker, I’ve been enjoying a tea in the different places we’ve been, some familiar and some new blends. Today was a simple classic, but it was enjoyed by the river in a beautiful city that didn’t feel like a city at all and felt very “me”.

Tomorrow we’ll continue exploring, mindful of not overtaxing Steve’s knee, since we’re supposed to be resting it, so it’s ready to hit the pedals again on Sunday. Today was a gorgeous day in the low twenties and sunshine, but it’s supposed to get progressively wetter and colder over the next few days, so we’ll explore as much as we can and get prepared to ride out in the cold and wet again. So familiar! Actually, we could see snow on the mountains as we rode through the city! 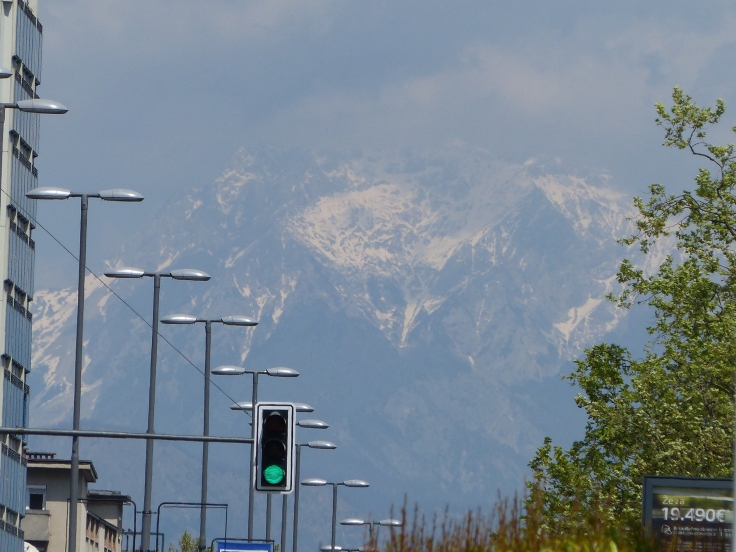 For now though, the day ends having discovered another wonderful part of the world, with the great fortune to have roamed and explored and experienced more amazing things. Gold in the memory bank. Gold I tell you, gold!

Weather: sunny, warm, no rain, a lot of wind!

2 thoughts on “Love It Ljubljana!”