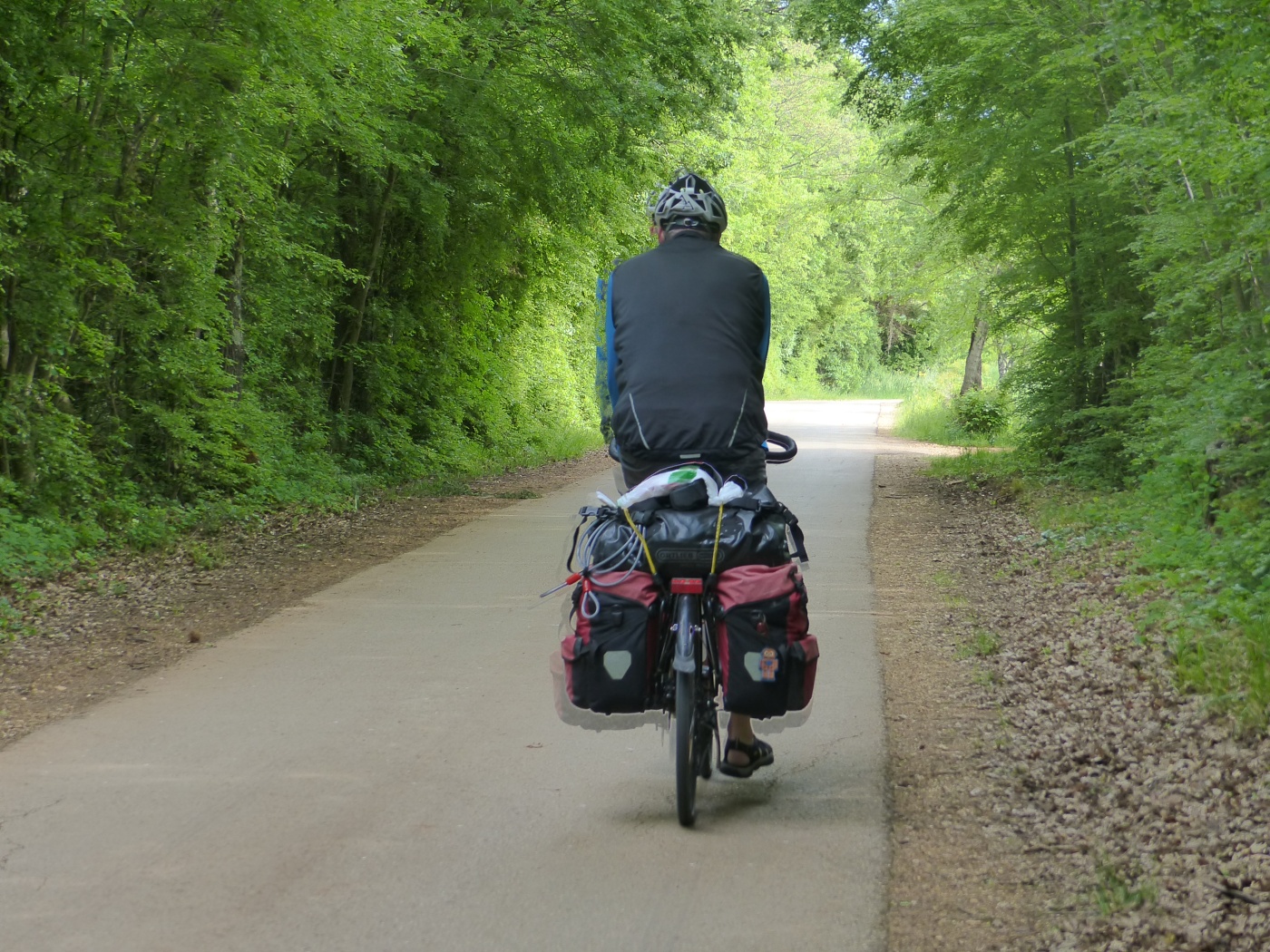 Farewell Croatia, cheerio, Doviđenja, we say goodbye and over the border we go.

We decided to try beating the weather and at least ride on a bit, even if it was only short, so with the prospect of rain but none so far, we hit the road.

Our final ride in Croatia was lovely as we found ourselves on peaceful country roads, up and down some hills that weren’t too hard, through little tiny towns and under avenues of trees. A wonderful send off. 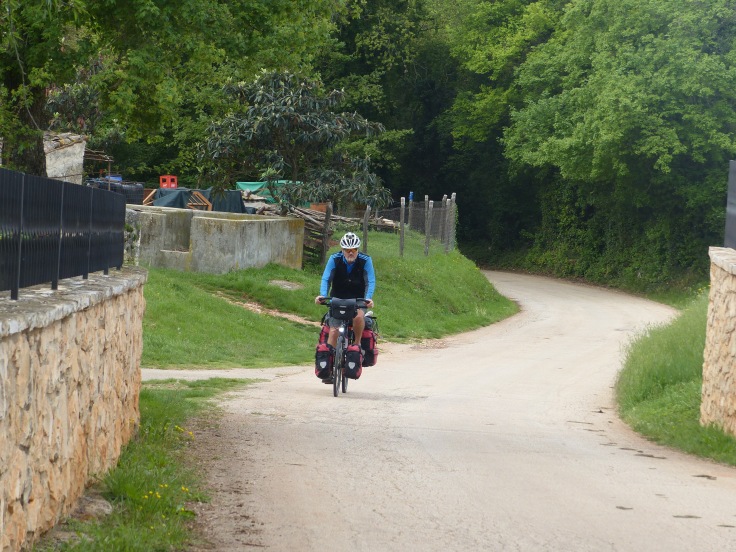 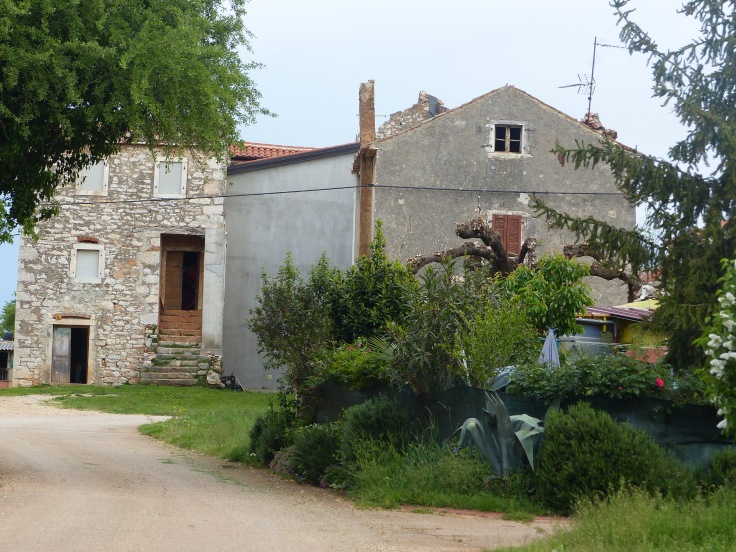 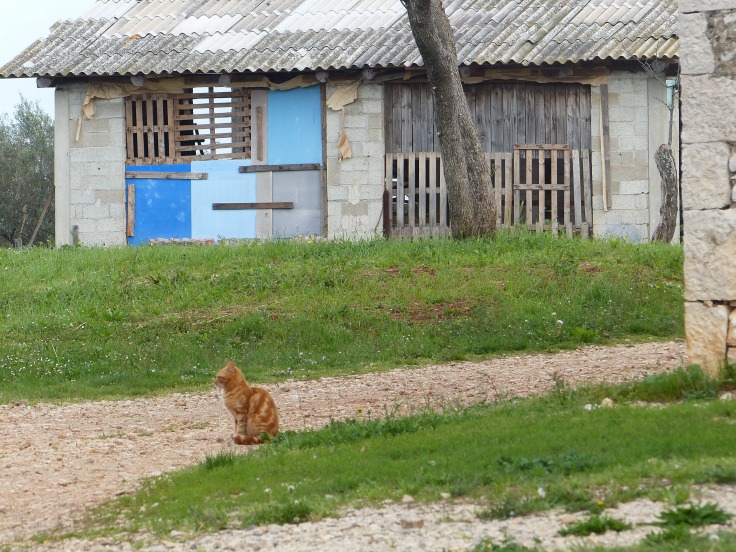 Our final downhill was into border control. Through the first section we went and our passports were stamped to say we had exited Croatia, then on to the entry into Slovenia. Steve went through, his passport was stamped and he was on his way. I came behind and showed my passport, but the man said, “OK, OK” and waved me on with a smile.

“Straight through?” I questioned, wondering why he didn’t want to look at my passport.

“Oh,” he then said as an afterthought, “I’d better stamp.” He then did the necessaries to my passport and I was on my way. Easy as that, I could have gone straight through!

The first thing we saw on the Slovenian side was…a cycle path! Yay and thank you! We pedalled along beside a wetland, with other cyclists, runners and walkers passing us, many giving us a big smile and a wave. I loved that the path was called The Route of Health and Friendship and followed an old railway line so we went under arches and through tunnels.

We stopped beside the path for a quick elevenses and it was quick because we felt the first drops of rain.

The ride along the path was great, we waved to other cyclists with panniers and had a canal and boats beside us. The first thing I noticed was English included on all the signs, along with other languages such as Italian and German, so Portorož must be used to many international visitors. We’ve been used to seeing Italian and German included on signs and information, but this was the first time we’d seen English as a standard additional language. 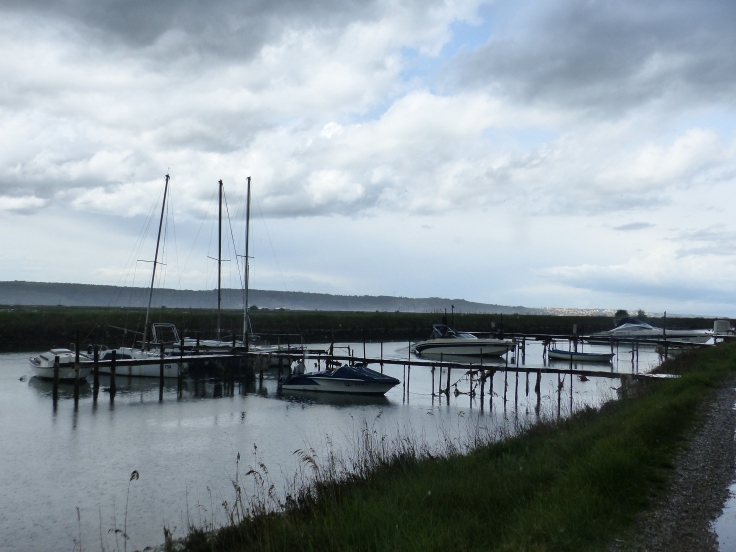 All of a sudden those few drops of rain became actual rain and we stopped under a little tree to put on coats and try to sit it out for a while. When a break came, we set off again but that break in the rain didn’t last long and suddenly the sky opened up and it pelted down, PELTED I tell you! We managed to find shelter under a roof beside a restaurant and sat it out for a while, then made a break for it and set off again.

Into the streets of Portorož we went,  in search of a supermarket to get some top-up supplies before everything shut for Sunday early closing. I went into the supermarket while Steve waited outside and while I was gone, it hailed. Time to get a move on.

As we pedalled up and down some steep streets, the weather decided it had more games to play. Not content with pelting rain and hail, it decided to throw a full on storm at us. BANG! BOOM! CRACK! The thunder turned up the volume and the sky lit up with lightning. Let’s get this done!

We set off towards the campsite we’d planned to stay in and intended getting a cabin again, because of..well…a storm!  We pedalled furiously along the cycle route and went through a long, disused train tunnel. Very cool!

Out the other side of the tunnel and BANG! the thunder really had a tantrum and the lightning forked. I pedalled furiously trying to remember what I’d been told in primary school…something about lightning…and rubber…and touching the ground…maybe my tyres will protect me if that fork of lightning heads my way!? Pedal…pedal…pedal…hurry…hurry…down came the rain…BANG!…CRACK!…RUMBLE!…FLASH! More pelting rain…and then…it hailed again! We were pedalling along the slick wet streets in pelting rain, hail, thunder and lightning! Oh what is it about us attracting this sort of weather? Why can’t we have good old ordinary, garden-variety, average superpowers like flight or invisibility? Why must our superpowers be the ability to attract appalling weather all the time!

We made it to the campsite, entering through another section of old rail tunnel and the rain came down even heavier and the hail got bigger, so we rushed to take shelter under the veranda of one of the cabins. Steve set off to find reception and returned with the brilliant news that reception was closed and wasn’t opening for another hour and a half. Oh joy, 90 minutes of waiting in the sogginess! CRACK! BOOM! BANG! The storm ramped it up a notch and the lightning forked in front of us.

“As soon as there’s the slightest easing off, I want to high-tail it back to the tunnel,” I said. “I feel safer sitting out lighting in a tunnel than standing under a wooden roof.” So we put foot to pedal and raced back to the tunnel and sought shelter. So there we were, soaking wet, cold and with nothing to do but wait as the torrential rain bucketed down outside. Then…the tunnel got a rain river running through it. The rain was so heavy, it started to pour down the tunnel and we had to move from where we were standing because the water was rushing around our feet. Oh, doesn’t it all just get better. Sigh.

Steve set off to see if there was a number at reception that we could call to at least see if there was a cabin we could stay in. While he was gone I was joined by a group of about twenty cycle tourists on an organised tour. They too had sought shelter in our tunnel. They were all our age or older, so it was great to see them out touring around by bike. I got chatting to a man and a woman and he told me they were all from Poland and on an organised tour that had started there, through Italy, then on through Slovenia and Croatia. He told me about some of the other tours he’d done and he and the woman were shocked to hear we were from Tasmania. So far away! He then turned to another member of the group and said “something, something, something, Tasmania.” So again, our little home state was a source of interest. He said they had another 25km left to ride today because they book ahead, so have to keep going to make it to the prearranged accommodation. “We can always get the bus to pick us up though if we need to.” I reckon I’d be calling on the bus! I wouldn’t want to ride another 25km in a raging storm! They eventually set off when there was a slight easing of the rain and some other members of the group waved and said goodbye. It was great to meet them and have a chat. About 2 minutes after they left the tunnel though, that rain became mega torrential. Those poor people. Please call the bus! On and off for the time we stood there, we were joined by other touring cyclists taking shelter. It seems Portorož, or maybe Slovenia as a whole, is a very popular cycling destination.

We had no luck contacting the management of the campsite and when the time came for reception to open and it still hadn’t opened, that was it. I was shivering and shaking so much with cold, my teeth were chattering and my toes were numb and Steve was completely over the standing around.

There happened to be a hotel 500m down the road, so off we pedalled. They had a little lock-up “bike cupboard” in the car park for the bikes and we lugged all our soaking wet panniers into the elevator and we were finally out of the weather. Oh, that hotel was soooo warm! I could finally regain some feeling in my feet, get into some dry clothes and watch the rain instead of feeling it soaking me to the bone. Another soggy day! On the last trip my little blue rain coat was such a permanent fixture in our photos that it was given a name. I had to replace it because it never fully recovered and despite being treated with water-proofing solution it was decidedly not waterproof after that trip. I haven’t named the red replacement because I didn’t want to jinx things by attracting so much rain that it deserved a name, but the way things are going, it too may have a moniker bestowed upon it!

So Slovenia welcomed us with a bang, quite literally! The BANG of that thunder sure made me jump, it was really, really loud. We got rained on, hailed on, had thunder and lightening all around us, got soaked, got cold, so…just normal cycle touring for us really!

Our time in Croatia has come to an end and we look ahead to a new country and new experiences and places to explore. As a thank you to Croatia, for the times we’ve had, I thought it needed a little ode. Here we go…

Farewell Croatia with all your hills

You gave us some tired legs and ferry-cranking arms!

You gave us friendly people with smiles and a wave

We loved every minute and all that you gave

Doviđenja Croatia, it’s been a blast

Our time with you has ended

But our memories will last

Time in the saddle: 2 hours 50 minutes 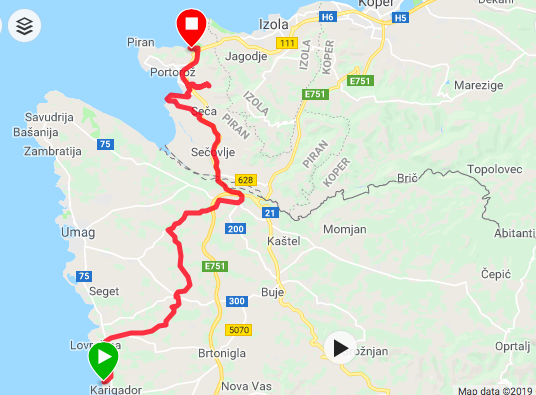 2 thoughts on “Into Slovenia With A Bang”