A day off the bikes to roam and explore Pula and learn a little history, so we set off back towards the Amphitheatre to have a look inside its walls. On the way we passed the Communal Palace (Town Hall) and Temple of Augustus as we strolled across the Forum and no, a funny thing didn’t happen on the way to the Forum! The Forum was an important gathering place and an integral part of the social life of the town and today it is still an open space surrounded by cafes and bistros so very much a social hub. The Temple of Augustus is the oldest preserved building in Croatia and was built during the reign of the first Roman Emperor, Augustus. I mean…really…to be walking in places that old…it just rattles my brain! The Communal Palace was built on the remains of a Roman temple, with its core dating back to 1295.

We continued our roam and passed the Cathedral, or to give it its full tongue-twisting title – The Cathedral of the Assumption of the Blessed Virgin Mary. The first phase of this was built in the 4th century beside the town’s defence walls, facing the sea. I particularly liked the Baroque bell tower.

On we went to the Amphitheatre and walked through to its inner walls. Wow! It was utterly spectacular. The first thing that struck me was just the colossal scale of it. How many poor slaves did it take to build that I wondered? We walked around and I thought of the brutal events that had taken place inside those walls, what the gladiators did and the poor animals that were used in the games as well. Such stories embedded in those stones. When we sat on the tiers I couldn’t quite grasp that our 21st century rear-ends were sitting on the same stones that 1st century rear-ends had also sat. Mind blowing. 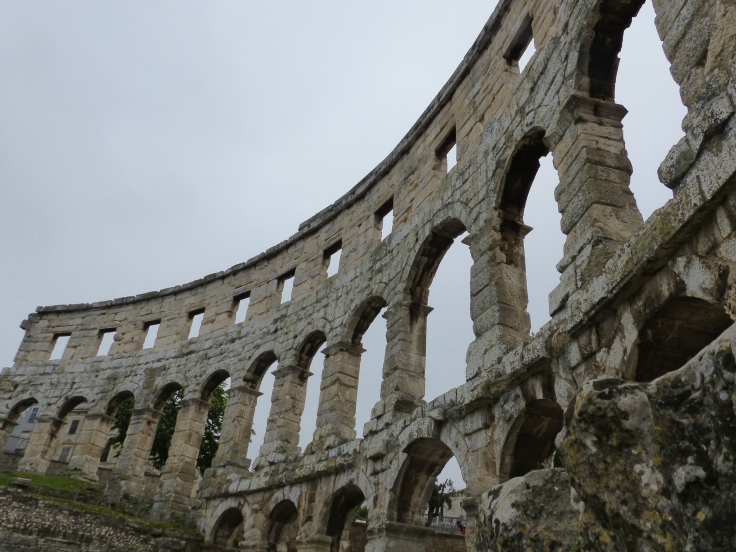 Roman remains are visible throughout the city and it’s quite staggering to see them in amongst modern day architecture. Shops and housing blocks sit alongside centuries old arches, gates and remains of buildings.

The Roman Walls are the oldest part of the Roman defence walls and the Hercules Gate is the oldest preserved monument of Roman architecture in Pula, built in mid 1st century B.C. The inscription on the Gate is thought to indicate the date of the establishment of the Roman colony Pola, around 45 B.C. The Triumphal Arch faces the main town street leading to the Forum and dates back to the late 1st century.

Finally we took a hike up the hill to Pula Castle, a fortress built by the Venetians between 1630 and 1633.

After roaming through ancient Rome, we took ourselves off to find some elevenses and shared a delicious grilled vegetable and hummus sandwich in a little park.

As in so many other places, there are dogs everywhere here, clearly very much a part of people’s lives and families. Many of them are travelling with tourists, walking alongside people carrying maps and guide books, but others look very much locals. They all look very happy and sit alongside families in cafes or parks. I watched one little doggie lass perched up at a table with a couple and this little dog definitely wanted to be part of the conversation. She kept her eyes on the people and every now and again would yap, as if to add something to the conversation or to say, “Look at me, I’m here, give me some attention please!” It was funny to watch and see a human conversation going on with a little four-legged lass yap-yap-yapping along with them.

We also did some freestyle roaming and stumbled across another market that had amazing produce. I’ve been finding it hard to find nice fresh fruit and veg in the stores, so discovering this market was fabulous. I mixed with the locals, made a beeline for the strawberries, practised my Croatian phrases and made my purchase!

Today is Anzac Day at home, our national day to recognise and commemorate those who died and served in World War I and World War II and other conflicts. I wanted to mark the day in some way, since on our last trip we went to the dawn service at Villers Bretonneux. No such significant site for us this time, but I wanted to acknowledge the day somehow, so we paid a visit to the National Liberation Resistance Fighters and Fascist Terror Victims in Istria Memorial. It was erected in 1954 and stands as a memorial to the resistance fighters and victims of fascist terror and the struggle for liberation in World War II. There were bronze busts of resistance fighters and victims and their stories were really quite moving. I was particularly interested in the three women who were included. Some of the information given about their stories was really quite graphic in telling what they endured as they fought to resist fascist forces during the Second World War. I also thought it quite fitting, on this Anzac Day, that we are in Pula which is known for its acceptance of others from different countries and cultures and taking in refugees from conflicts, giving them safe haven. As a result, the city has become a rainbow of different cultures, nationalities, religions and ethnicities. With this as part of the city’s history and story,  each generation is raised with a sense of equality, mutual tolerance and freedom. I think that’s a perfect message on a day that commemorates and remembers the lives lost in conflicts and war, so we marked the day in a city that is said to focus on peace and freedom.

Another interesting fact that went into the memory vault today, is that this area has only been Croatian for the last 70 years and prior to that it was Italian.  The Italian heritage is certainly evident everywhere, coupled with its close proximity,  it makes for a very vibrant mix of cultures. We were told that everyone here is bilingual in Croatian and Italian. You can catch a ferry to Venice from here, so we are just across the water from the Italian mainland.

Sorry if today’s blog post is more like an episode from the history channel, but that’s pretty much how we spent the day. We do like just roaming and reading and learning about new places, their stories and history. Pula is certainly an interesting city with such a blend of old and new, modern and historic with some amazing relics and architecture from the past.

Tomorrow we ride on, heading north up the coast to see what we can discover. The weather is supposed to crack up again for our departure, so we may be getting soggy again, but hey, we’re used to that. We’ll just take it a bit easy in the wet I think and hope there aren’t any mega slippery downhills again! We also hope the wet weather is just a temporary blip and our superpowers of attracting awful weather haven’t kicked in this early!

Quick plug for Steve’s blog too, if you’d like to take a look. He keeps a journal over on Crazy Guy on a Bike and you can find his entries at crazyguyonabike/doc/runrideroamagain

Weather: cloudy, cool, sun had a go at making an appearance but was too bashful in the end

6 thoughts on “Roamin’ with Romans”