“Do I look like a dork in this?” That was the pressing question asked by Steve before we set off this morning. Hmmm, how do I answer that?

Time to leave Zagreb and hit the open road. We put foot to pedal at 7:30 am and off we went.

I quickly found that the added supplies we had accumulated had added to the weight quite noticeably. I found going around corners took a little more skill than usual and I can’t claim to have amazing skills of balance on the bike at all times, quite often feeling like an upside down  turtle on a unicycle in the balance department. I avoided the wobbles but found I didn’t have much of a turning circle, not so much turning on a dime as turning on a wagon wheel. Still, we got through the city traffic without a drama, just a few wrong turns and a bike path that ended in a barrier with the path completely dug up for maintenance. About turn and cross the road to find another path and on we went. Lots of people were commuting on their bikes and people were very kind as we pedalled along taking up more than our fair share of the path with our wide load. Something I’ve noticed about the people, that is starkly different to home, is how fit and healthy everyone looks here. It seems the obesity epidemic that’s the scourge of so many countries, Australia included, hasn’t reached these parts, because people are slim and fit and there’s lots of people of all ages on bikes, people out walking their dogs and generally just moving. I only saw one McDonalds in Zagreb and that was all I saw of fast food restaurants. The bars and bistros are full at lunchtime and evenings but it seems food is viewed as an accompaniment to socialising and something to be savoured as part of that experience with others, rather than it just being something to inhale. The result seems to be fit, slim and heathy looking people everywhere, so they are clearly doing something right.

We were soon off the bike path and onto a very busy road resembling a highway and the traffic was in its speeding commute. The drivers were brilliant, giving us as much room as they could and even trucks were giving us a lane’s width distance when they were able.  All of a sudden, “STOP!” called Steve, “we’re on the wrong road!” What was that I was saying about our superpowers of going the wrong way? We stopped on the side of the road with traffic whizzing past and managed to sprint across to a car park to think and recalculate. Steve had another look at the route and discovered that if we kept going along the busy road we’d get where we needed to go. That didn’t sound like fun. There was a dirt bank running alongside the road, so in the end we opted to pedal along that, out of traffic’s way and on we went.

Before long we were out of the busy city and in the beautiful, peaceful countryside. The roads were quiet, we passed silver birch forests, farms and wetlands. A man was herding his sheep and goats, people were working in their gardens and I waved and gave a “Dobar dan” (Good day) as we pedalled past, I saw an elderly lady walking down the street, hunched into her layers of cardigans, brown weather beaten face and Roman nose, with a headscarf and carrying a large bag over her shoulder. She epitomised a hard working generation, still going about their work, bent into the task. She was beautiful.

The roads were nice and flat so we had perfect settling in terrain as the legs warmed up and got used to cycling again with a full load. The weather was perfect with sunny skies and no wind. Bliss.

We decided to stop for a short pitstop when we saw a bench overlooking the countryside and had an entree to elevenses at ten. As we were riding up to the spot, I suddenly saw Steve stop the bike and it went crashing to the ground, with him tumbling along with it. “What happened?” I asked in wonderment at what could have caused a tumble out of nowhere.

“I put my foot down and there was nothing there, just a ditch.” Oh dear, just a little misstep, no harm done. 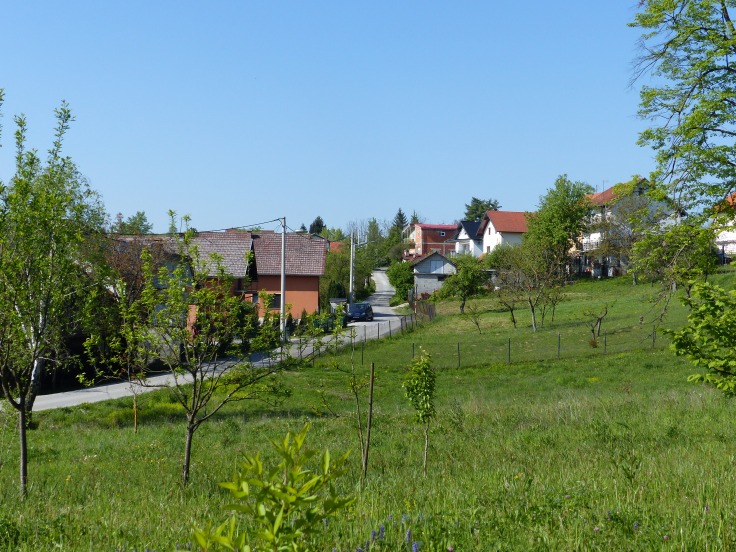 The onward ride was glorious and the traffic was almost non existent but the drivers who did pass us were fantastic, very kind and patient, giving us distance or waiting behind us to pass when it was safe. A man in a van gave us a wave, a lady gave us a honk of the horn, a big smile and a wave and a fella on a motorbike gave us a toot and a big thumbs up. We even got a wave and a greeting from a little boy and girl walking along the street. I waved and greeted them with “Bok” (HI) and I smiled a big smile as I pedalled on. Thank you, you wonderful people, we’re grateful for the encouragement! 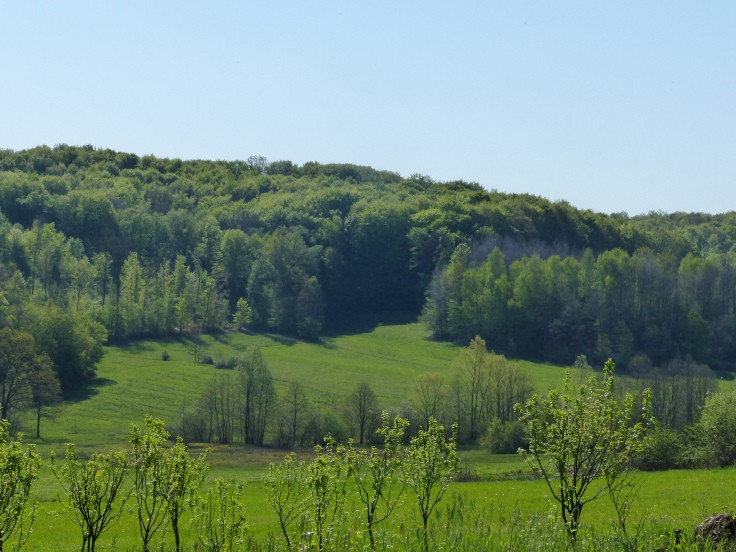 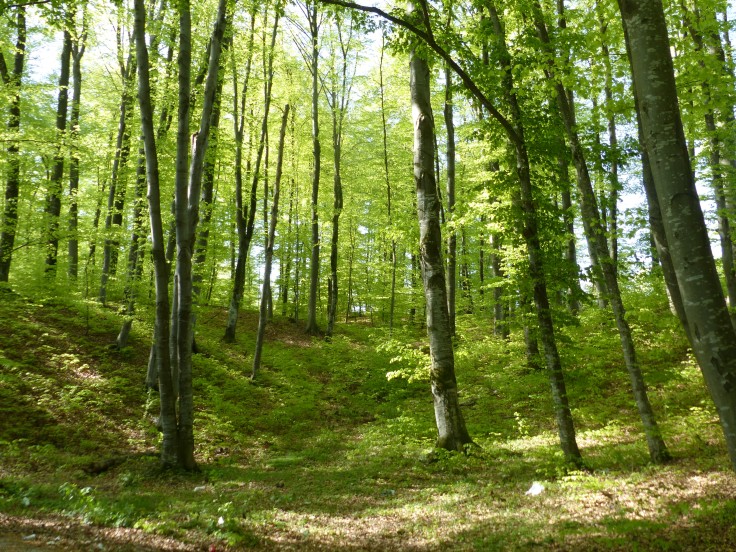 We saw a church spire in the distance and figured a church usually has somewhere to sit so we headed for it as a spot for elevenses. It did indeed have a bench for us under the trees and it turned out it was something of a church too – St Mary Magdalene Church was built in 1672 originally of wood and was then demolished and rebuilt in 1749. It still has an original wooden pulpit that dates from 1762. The church was badly damaged by shelling during the Croatian war and was renovated between 1999-2007.  Quite a life this church has lived. As I was walking around the church to have a look, an older lady with a lovely wrinkled, toothless face walked towards me carrying letters in her hand. “Dobar dan” I greeted her.

“Bok,” she replied and began talking to me.

“Oprosti, ne gavorim hrvatski,” (Sorry, I don’t speak Croatian). This didn’t seem to bother her because she kept right on talking to me, waving her mail in the air and then striding off towards a house. In seemed she wasn’t happy about something the postman had delivered!

Snack and drinks complete, it was time to pedal on. It had warmed up to 26C and before long our lovely flat roads began to curve upwards and the hills had begun. The last 15km was pretty constant hill after hill and there were some doozies, steep and endless and we both had to stop a few times on the way up to catch our breath, regroup and then psyche ourselves up for the onward climb.

We made it in the end. At the top of one hill I spotted a deer running through trees and then in ran across the road in front of us. A special sight on a top day.

We churned the pedals uphill but at the top of one I heard Steve say, “Awesome!” He’d spotted the long downhill run and down went his head, the shoulders hunched and he was off, no brakes just flat out down. Me?…brake…brake…cruise…brake..cruise…brake…brake doing the scaredy-cat downhill run. At the top of each hill I would just wait for Steve and say, “Away you go,” and let him take off ahead, screaming downhill like a bobsled. Then he’d wait at the bottom for me to get there in my own un-brave time.

We passed a sign warning of wild boar, so I kept an eye out as we passed forests, but not a boar to be spotted. With about 10km to go to the campsite we were heading for, we both ran out of water. It was hot and the climbs were draining. At about 3km to go we passed a roadside restaurant and decided we just had to drink something. We pulled into the car park, found an outside table and I downed a bottle of apple juice and a mug of tea in no time flat and could have drained them all over again, I was that parched. We hadn’t stopped since elevenses and I was feeling the hunger grabbing and definitely just needing to drink and drink.

On we went, along a very busy road with cars and trucks whizzing past, but again the drivers were fantastic and kept their distance as best they could. We found the campsite but a sign on the gate said for enquiries about camping, to go to the house across the road. Oh dear, this didn’t look good. At the top of one of our big hills I had commented to Steve, that I really hoped the campsite was open so we weren’t stranded and here we were looking like it was indeed closed. We were losing faith in our campsite app that had assured us it was open. Off Steve went to the house, soon to return with the news that the campsite wasn’t yet open for the season but the owners had invited us to camp in their yard. The kindness of strangers once again. We thanked them profusely and that’s where we are – the Nylon Palace is pitched on the grass beside a magnolia tree. We are a bit in the middle of nowhere with no town nearby and the highway beside us, but we managed to find a small minimart up the road and gathered some basic supplies to feed us for tonight.

It was a top day and the only thing downgrading it from perfection was the few wrong turns and the dastardly hills that were tricksters and messed with our heads by going on and on just when we thought they were ending! We did it though and the legs were a little tired and the throats were a little parched but it all weaved together into a magnificent day and a super enjoyable ride, to be capped off by meeting some more lovely locals who extended us a welcome and offered us a place to lay our weary heads. By far the biggest bonus of travel is the wonderful people we meet.

Tomorrow we ride on, not quite sure where to yet because accommodation options are a little thin on the ground in places, but we’re making our way towards the coast. Hills ahoy!

Time in the saddle: 4 hours 50 minutes

2 thoughts on “Pretty Close to Perfect”