Brrrrr, the weather report for the day was “heavy rain, 5C, feels like 1C”. It was a bit nippy! It was a day to hit the road and continue our onward journey, so on the way we called in to another National Trust property to have a look. We’ve joined the National Trust, so as members, we are going to as many places as we can when we have them in our area and it’s been great. There are so many places to see here, so we get our dose of history when we can. Today’s visit was Little Moreton Hall, a Tudor house built in 1504, with additions being made to it, up until 1601. The Moreton family were wealthy land owners and built the property as a sign of their prosperity. “Look at us!” it was intended to announce to all who saw it, “aren’t we rich and special and can’t we afford to have a grand house!”  We had wanted to visit this house after seeing the pictures, then it was recommended by the friendly girl at the Tudor house we visited in Tenby. To look at Little Moreton Hall, it’s amazing it’s still standing. It’s so wonky! Every wall seemed to be leaning at a different angle and the floors inside sloped this way and that. Stand it does though.

There were Christmas activities going on again, we were greeted at the door by a lady offering samples of hot, spiced apple juice and there were decorations in the rooms. The decorations were quite modest though, just garlands of leaves and some ribbons, because as I learned, there were no Christmas trees in Tudor times. I also learned, after seeing the banquet table, that forks weren’t used until the 17th century. I didn’t know that. So up until then, it was just knives and spoons, which must be why they ate so much meat with their hands and tore chunks off it, because they had nothing to hold it down to cut it, unless they tried to just pin it down with a spoon! 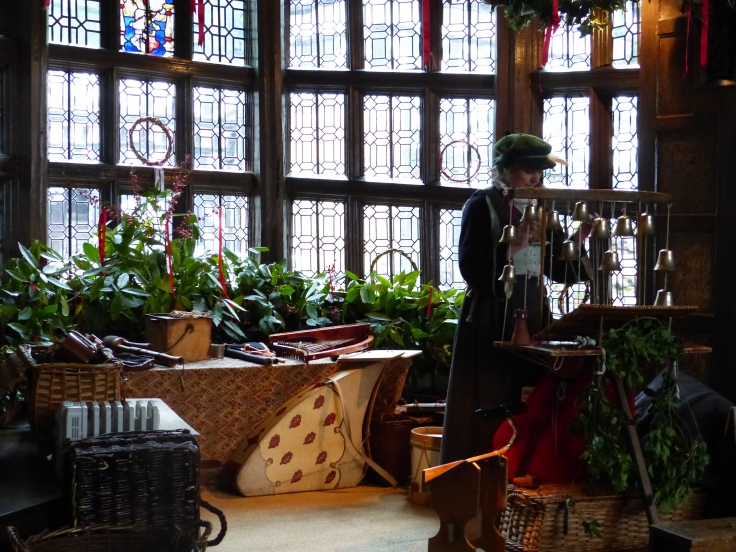 We had a pleasant and interesting stroll through the house, Steve again perfecting his bending and stooping skills to get through doorways. There wasn’t any heating in that wonky little house, so Steve soon said he couldn’t feel his fingers, even though he was wearing gloves and I’d lost feeling in my toes, despite wearing my “stay hot” socks. So, to stave off frost bite in our respective extremities, we ended our roam around with a visit to the little tea room, bagged a table right beside the fire and enjoyed a pot of warming beverage, while defrosting our feet and fingers by the warmth of the hearth. Aaaahhh, niiiiiiccccce!

Our visit also taught me the origin of another phrase. During festive occasions, a drink of warm cider or ale, spiced with cinnamon, would be served in a Wassail Bowl. The word “wassail” probably comes from Anglo-Saxon, meaning to “be in good health”. People would pass the cup from person to person. At the bottom of the bowl was a piece of toast, which was saved for the most important drinker. So people sharing the cup were “drinking a toast” to their health. There you go! I love learning those little stories about our language.

After we had restored circulation to our hands and feet, we set off through the rain, to leap back into the van, fire up the heater and hit the road. Being Sunday and being now lunch time, it was time to find a pub for the Sunday pub lunch tradition. As we tootled through Staffordshire, we stopped in at The Black Horse. This was a nice little pub, offering all the usual pub grub and Sunday roasts, but also happened to have a vegan section on their menu. Good on them! We took a seat, I scanned the menu with a number of delicious sounding vegan choices, but quickly chose the Shepherd’s Pie, as warming, hearty comfort food on this chilly, wintery day. Steve continued to scan the menu.

“Mmmmm, roast lamb,” he said with a dreamy look in his eye. “What will I have? Roast lamb, or the vegan Shepherd’s Pie?”

I said nothing, leaving him to his deliberations, the decision being all important since Sundays really are our treat days and a rare eating out experience. Big decision!

The lady came to take our order.

What was Steve going to order. What was the decision? What had won, the lamb or the shepherd?

”Make that two!” he said emphatically, slapping the menu closed.

Well, how about that! The lamb was saved and the shepherd had prevailed. The Big Fella had embraced the veg!

The lady disappeared with our order, only to return.

“We have a couple of other dishes from the vegan menu, we were wondering if you’d like to try? We’d be interested to hear what you think of them, there’d be no charge, but would you like them to try as a starter?”

How lovely! We said we’d be happy to and thank you very much!

She returned with two little bowls, one with vegan Macaroni and Cheese and the other with vegan Lasagne, accompanied with a side salad and some vegan garlic bread. They were both very tasty, with the lasagne in particular, being superb!

When she came to take the plates away, she bobbed down beside the table and asked, “Right, what did you think of those. We’d really like the feedback, good or bad.”

We told here they were really nice, the Lasagne was sensational and the Mac and Cheese just needed a little more oomph, in the cheesy flavour department, maybe with some nutritional yeast, but was very nice all the same. She was most pleased we’d liked them and wrote down our suggestions and disappeared back into the kitchen.

When our lunch arrived…oh my! The first mouthful was ambrosia. It was SENSATIONAL! The Shep was full of lentils and chick peas, with sweet potato mash on top and even vegan red wine in the sauce and the vegetables on the side were delicious, especially the roast potatoes. It was superb and did I mention… sensational??!! We polished it off and left our plates looking like they’d been through a sink of Palmolive.

“Mmmmm…mmm…mmm…mmm…mmmm” was all Steve could say at the end, until adding, “those potatoes were sensational!” Clearly I wasn’t alone in my thoughts!

I asked if I could speak to the chef, to say thank you and when she came out and sat with us, she was an utterly delightful young lady. I thanked her for the splendid lunch, telling her it was the best vegan meal we’d had in all our travels. It turned out they’d only had the vegan menu for a week!

“I’m still getting my head around it!” she said.

“Well, you did it brilliantly,” I said, “and the choice you offered was the best we’ve seen and it was just sensational!”

She beamed and it turned out, that along with us, there was a table of thirty members of the local Vegan Society there! So here was this young lady, who looked young to be in charge of any kitchen,  successfully turning out traditional Sunday roasts of lamb and turkey, as well as grappling with a new vegan menu and serving it to a group of thirty members of a Vegan Society, who would be quite discerning patrons I would imagine.

“I’ve never had to put out thirty vegan meals before!” she laughed, “what goes first, what order do I do things in…it was all an experience as I was going!” she explained. What a champion she was and what a fantastic little pub, to offer such a great choice of food that can be enjoyed by one and all. Fantastic. SEN-SAYSH-ON-AL!!!! I told her we would be spreading the message far and wide, about what a great place it was and how great the food was.

“Awwwww, thank you so much, it’s brilliant that you liked it so much.” We did indeed. We liked it VERY much! (Hence it taking up so much space in this blog post!)

Our bellies were well and truly full, so we waddled to the van and heaved ourselves in and set off towards our destination. It was only 4 o’clock, but dark enough to see all the nice Christmas lights on in the houses. The towns and villages felt very festive in the dark, cold, wet afternoon and lit up so gaily.

Oh, when we called into the supermarket I did see something that made me smile. With Steve choosing to eat veggie food lately, I wondered if it was all meant to be when I saw this bag of salad. 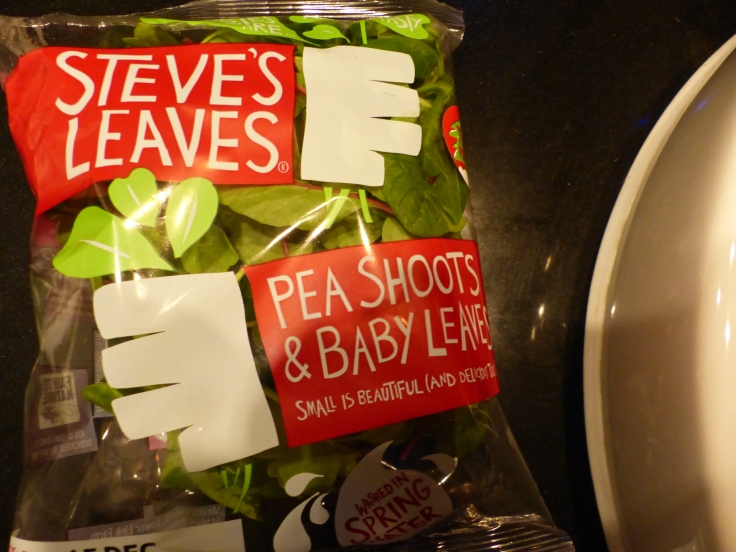 A sensational day was had by one and all of the Tasmanian travellers. We had:

What more could we ask for!