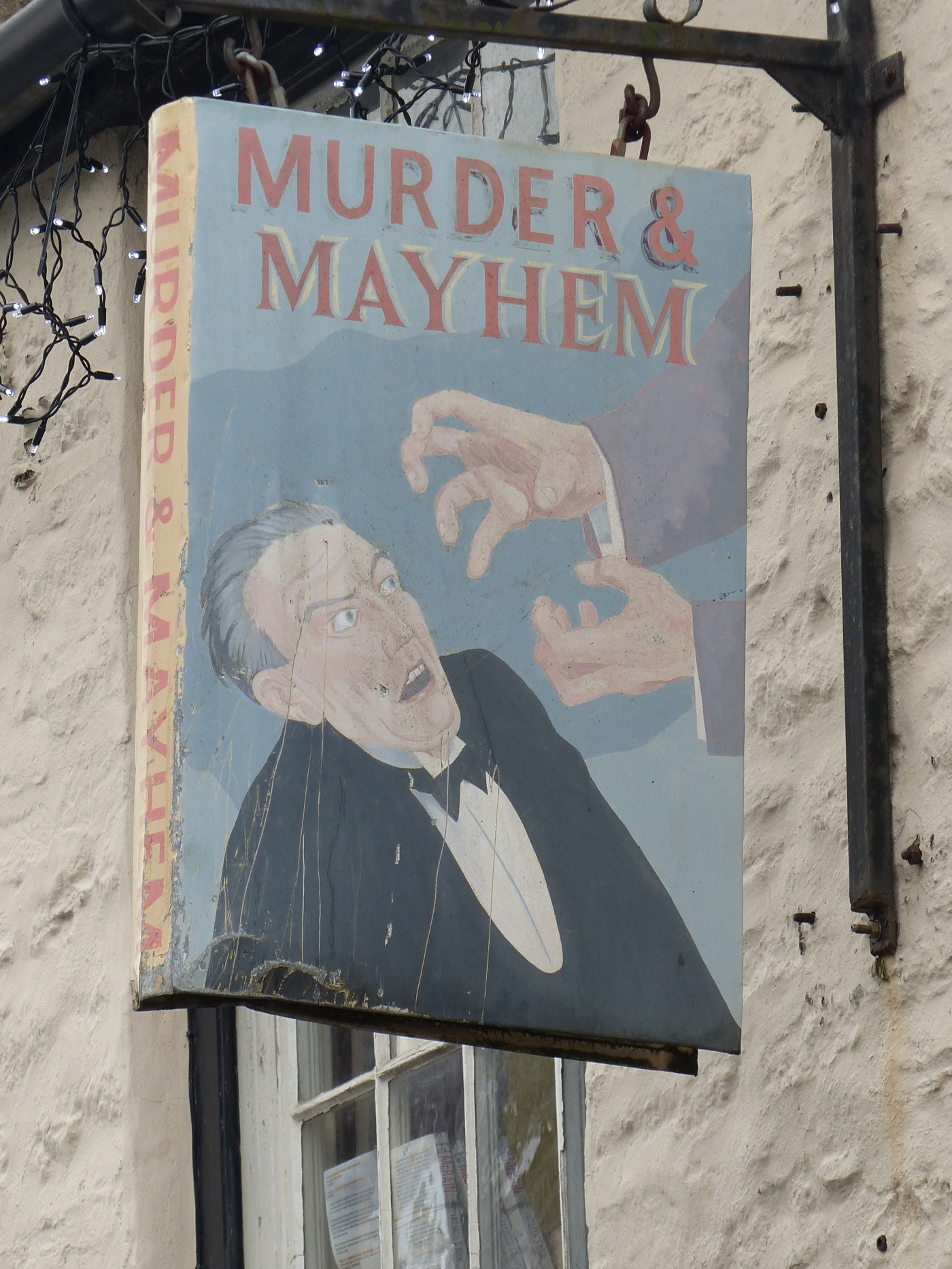 Well, let’s start having a look around Wales, that was the plan for the day. Armed with the online research that gave us the “Top 10 Most Beautiful Towns in Wales”, we set off to make our way through the list, starting with the ones in our general area. First stop was Chepstow, which was a nice little town, sitting beside the river. We did our usual roaming routine, up and down the streets, around this corner and that, along these cobbles and those and generally had a good look about. It was even a very tropical feeling, 14C, which felt even warmer than our English summer! 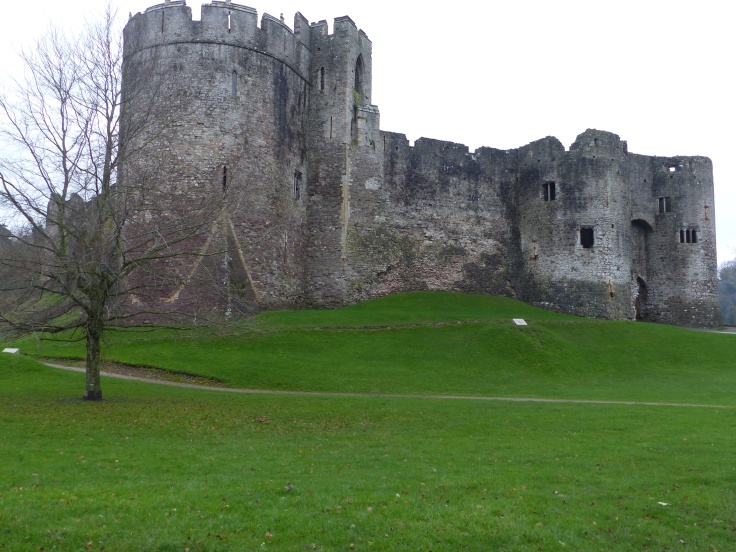 Into the countryside we went, making our way north towards Hay-on-Wye. The scenery was gorgeous again, with the beautiful greens and golds of the trees and landscape. We followed the Wye River and actually dipped in and out of England as we went along, since we were right on the border. ‘Welcome to Gloucestershire’ read a sign across the road as we cruised around one corner. Then, a few kilometres later we passed a sign that read ‘Welcome to Wales’. Oh, I guess we must have left it at some point without realising it! We were weaving back and forth across the border. It was nice to be welcomed to each place as we re-entered though!

Hay-on-Wye was a little town that had been calling, “Over here Heidi, where have you been all this time, we’ve been waiting for you. Hurry up now!” It was calling me because this was a little town made just for me, it’s claim to fame being that it’s a town of bookshops! It was a tiny little town, but it had more than thirty bookshops! I was in heaven!  Most of them had a mixture of new and second hand books and it was just a sea of books from shop to shop, some new releases, some classic titles, some familiar ones that are sitting in my library at home and some even had titles behind glass, with price tags of £724! I happily strolled up and down the aisles and shelves and in the nooks and crannies. Some of the shops were in such old, little buildings, a bit like cottages, that exploring meant going into separate little rooms, up and down stairs and into narrow little spaces. Mmmmmm, breathe in that perfume of musty old pages, ink and eau d’flyleaf! It was wonderful! 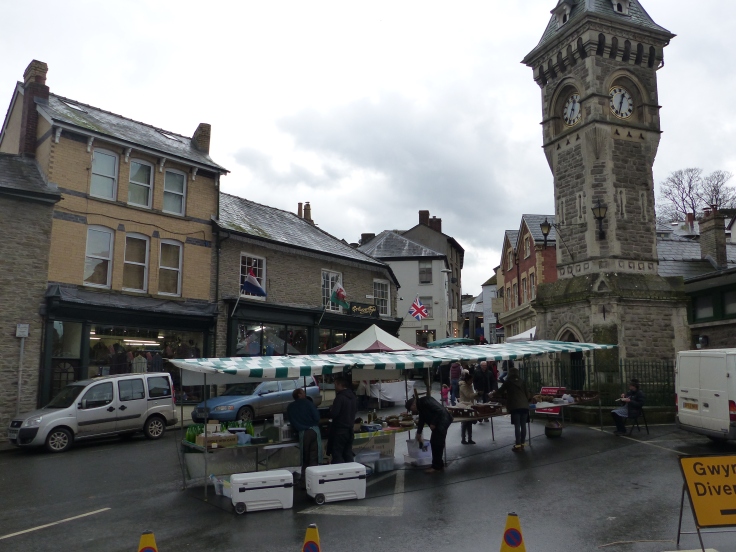 It was a quaint little town and it was market day too, so we roamed around with the locals carrying their bags of produce and we breathed in the delightful smells from the felafel stall. Must be time for lunch! We found a lovely little veggie cafe and settled in out of the wind and the chill, that had descended on the previously mild day. I had an absolutely delicious roast kale and tomato Buddha bowl, chock full of veg and avocado and nuts and seeds and rice. It was scrumptious. Steve had toasted ciabatta with hummus, avocado and semi-dried tomatoes and then, while I was still devouring my Buddha bowl with delight, he went off in search of dessert and returned from the counter with a raw vegan brownie, which he tucked into with gusto. It was a superb lunch in a lovely, charming little town. Delicious veggie food and streets full of books…did Wales know I was coming!?

The drive out of Hay took us past the Brecon Beacons and those mountains, with their palette of rust and green, under a ghostly grey sky, were quite spectacular. The sweeping views, (although somewhat obscured by the now pouring rain), were glorious accompanied by the rivers, waterfalls and huge lakes, similar to the Scottish lochs. It was beautiful and I felt very small, surrounded by this grand, vast and rugged landscape. 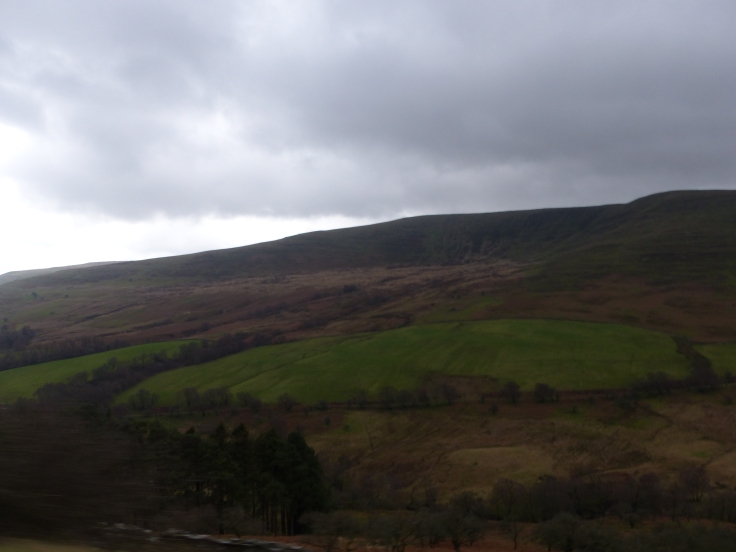 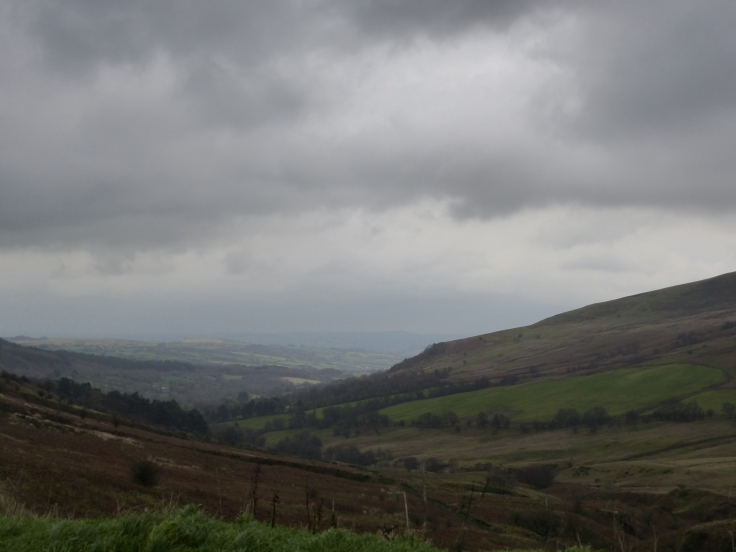 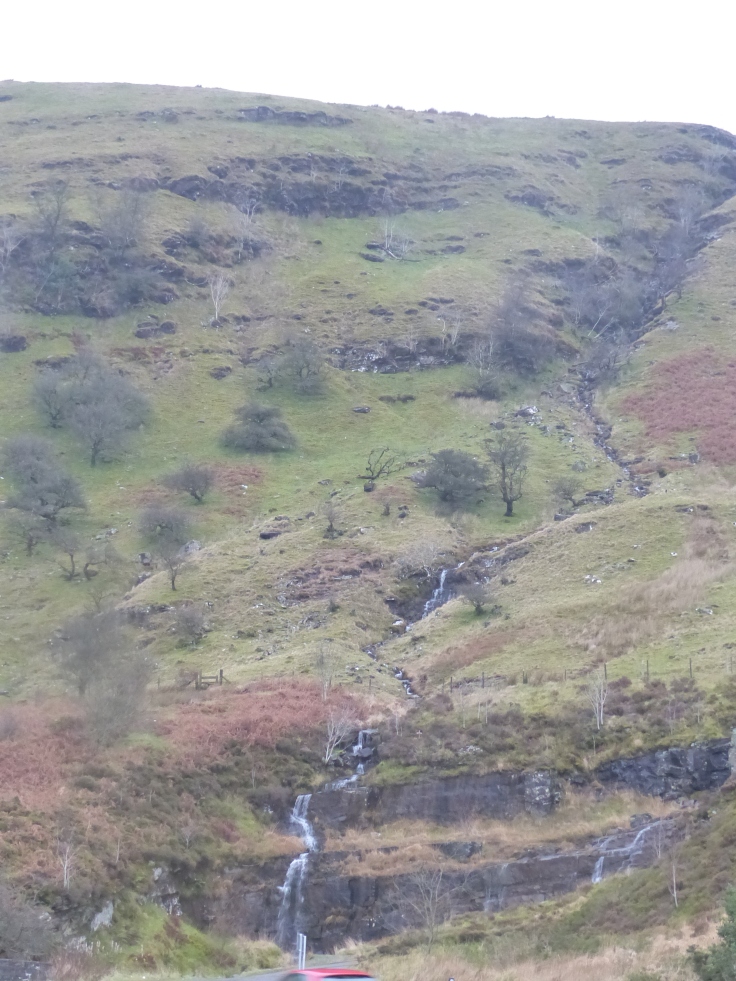 It was now growing dark, but if anything, that made our final stop look even more splendid. We called into Caerphilly and  walked around to have a look at the castle, sitting inside its moat. The rain, the encroaching darkness, the wind blowing fiercely all around us and the castle lit up, couldn’t have made for a more perfect experience. The castle looked stunning in the fading light and walking around those ancient ruins, with the winter wind and chill enveloping us, made it all quite magical. 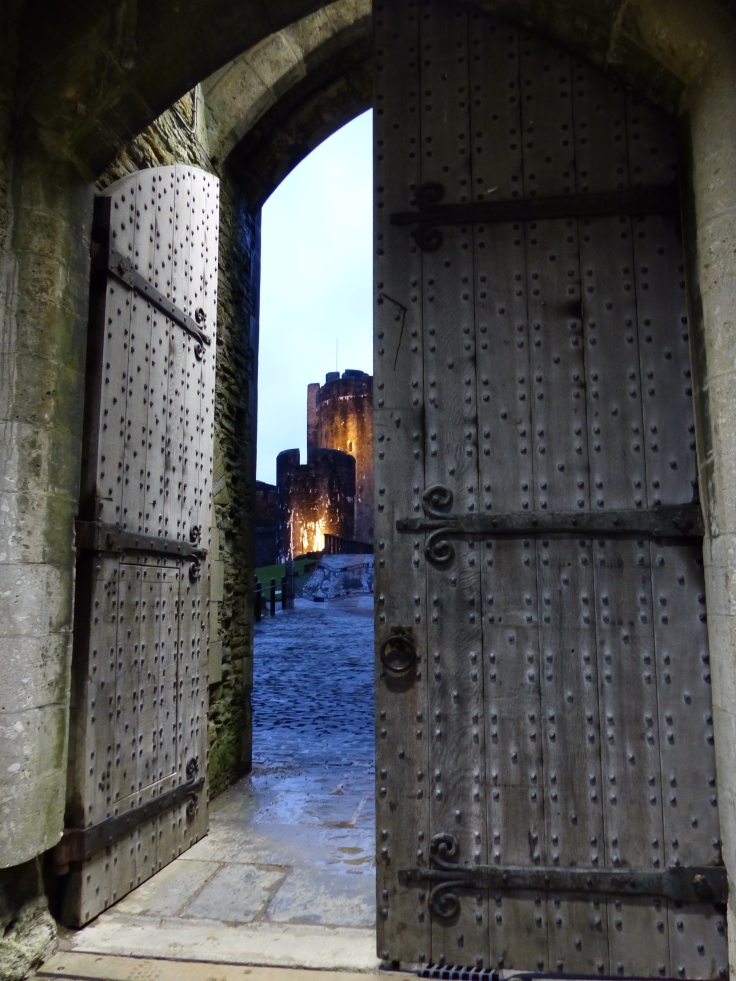 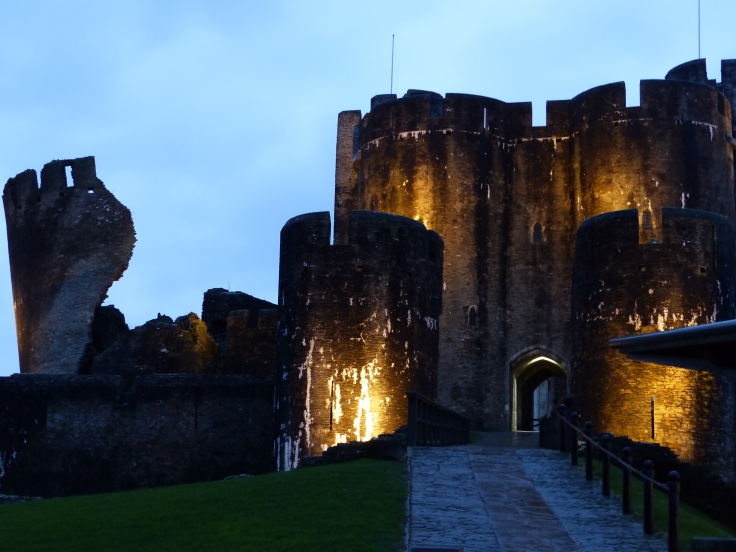 As well as the scenes and experiences we are having so far in Wales, I’m absolutely loving the language too. I’ve always loved the Welsh accent and to walk around hearing the beautiful, lyrical, sing-song voices is wonderful. I also love that the Welsh language is everywhere. Wales has a language policy, which states that Welsh, as well as English, must be displayed. It’s also mandatory that Welsh be taught in schools. I think that’s fantastic. It’s one of the things I loved about New Zealand too when we travelled there, that the Maori language is everywhere and there are dual language signs all around the country. It’s a shame Australia doesn’t seem to have the same level of respect for our own indigenous languages, most of which have now been lost or forgotten. 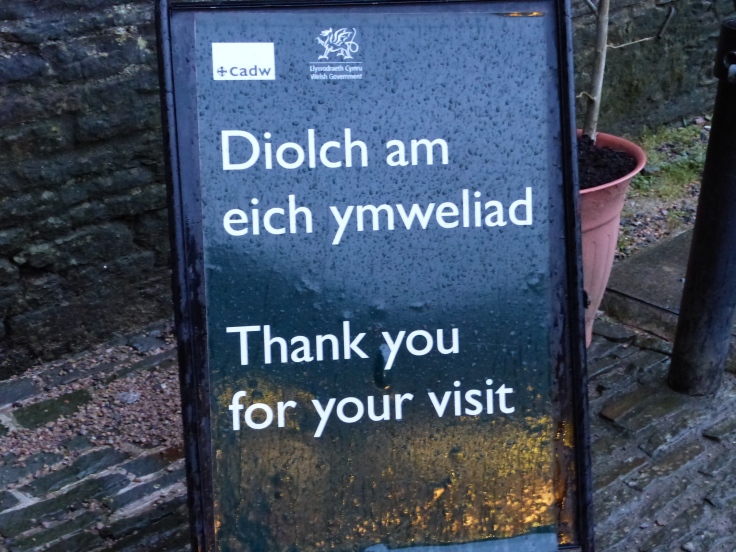