Shorts and t-shirt, from the very first stroke of the pedal. That’s how glorious the morning was! The sun shone, the air was warm and we pedalled off towards Anzio.

It was an absolutely beautiful day for a ride, in the sun and with no wind. The only thing that dimmed the sparkle somewhat, was the road. We were back on a highway, back in traffic, back to riding over, through or around potholes, cracks, lumps, bumps and generally abysmal road conditions. The sun was shining though, and that always helps with enduring such trials. We also knew were were heading for the seaside, which was another incentive to deal with the bumps and craters. We powered on, around roundabouts, down the highway, passing multiple pelotons of Sunday cyclists and exchanging waves and smiles. We also saw another little touch of home, a banner advertising a school called Koala! 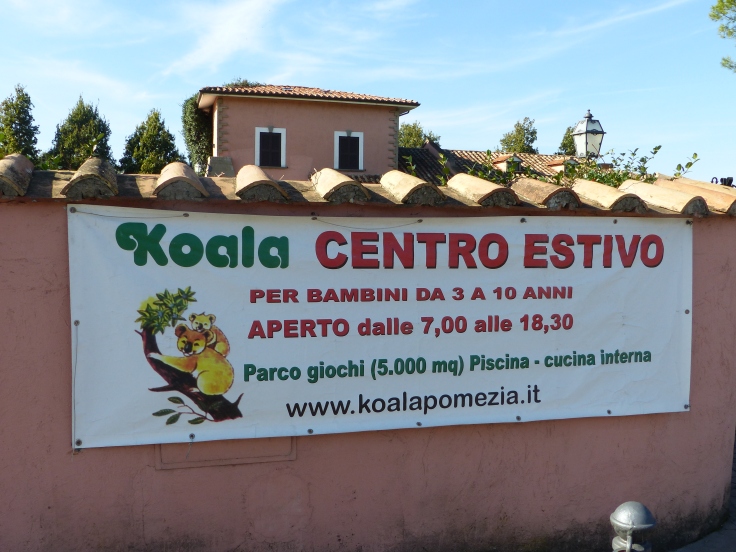 As we pedalled furiously along that busy highway, traffic grazing our shoulders and the constant crater-like potholes threatening to swallow us or reconfigure the shape of one of our wheels, we heard a sound behind us. BRRRRRROOOOOOAAAAAARRRRR… BRRRRRROOOOOOAAAAAARRRRR… BRRRRRROOOOOOAAAAAARRRRR… That sound was unmistakable. Even though I couldn’t see the vehicles making that noise, because they hadn’t yet gone past, it was obvious…the bikies were in town, and they were riding Harley Davidson’s. That BRRRRRROOOOOOAAAAAARRRRR… was getting louder and closer and there were obviously a few of them creating that signature cacophony. Oooh, I thought, I might just try and edge over a little bit more. I guess I thought a Harley rider would probably think of someone on a bike, and a loaded up touring bike at that, as a lesser two-wheeled species, compared to their roaring bike of choice and may even think of slow moving, two-wheeled, pedal-powered bikes such as ours, as a bit of a nuisance on the road. The roar got louder and then BRRAAAMMM…BRRRAAAMMM.. one by one, they zoomed past, some riding solo, some with a passenger riding pillion. Then, I saw it. The thumb. The thumbs-up sign attached to the lady on the back of a Harley. We were being given a very clear sign of goodwill and encouragement. It was a quite distinct, Harley style thumbs-up too. A low, “I’m too cool for my Harley” style of gesture, something like a cross between Fonzie’s thumb and a tired hitchhiker, but it was there. She gave that sign to me as she zoomed past and then repeated it as she zoomed past Steve. There’s something about being given that encouragement by a bikie on a Harley, that makes that inner warm glow, glow just a little warmer. It was also a good reminder, to not judge a gal by the bike she is riding. This Harley gal was not to be viewed with apprehension, this gal was a fair-dinkum friendly and encouraging bikie. I smiled. It was a top moment. I must start practising that thumb movement though. An “I’m too cool for my thumb” kind of sign.

The air changed. It became just a little hazy, with a little crispness to it, the sort of air that tells you, you’re getting close to the sea. How great! A sign pointed off the highway and said the beach was just down that road. Time to get off this no-fun highway and head for the beach! The road took us through residential streets, but there it was, the hazy, sparkling blue, right there in front of us. Being from an island state and living on the coast, we are lovers of the great blue and feel most at home when we can see the sea or walk along the beach. There it was! We pedalled along, with the blue water to our right and then came to the outskirts of Anzio. A bench appeared, right in the sunshine, so we stopped for a quick elevenses, before riding on to find our hotel.

We took a leisurely pedal along the road, taking in the fantastic sea views and soon located our hotel. We still had an hour before check-in, so we sat on a bench across the road and just enjoyed the sunshine and looking out to sea. Perfect.

The man who checked us in to the hotel was very helpful and friendly, giving us a space for the bikes and helping us carry our bags up to the room. We settled in and then enjoyed the treat that we had…a balcony…with chairs and a table…right across from the beach…with a sea view. How splendidly grand! Steve was grinning for ear to ear.

We took an evening stroll in search of food and watched the sun set over the water, before strolling back to our balcony, where we saw the final, gorgeous red light of the sun disappearing into the sea.

What a top day. Glorious sunshine, a nice little town to arrive in, with a place to stay right near our beloved sea. We’ll stay here a couple of days and then pick up the van we’re driving back to London. Anzio has quite a bit of history, being the site of one of the major, and most bloodiest battles of WWII in Europe, so we’ll explore here and hopefully accumulate some more history learning.

Oh, I also learnt something on today’s ride. Bamboo that hangs over the edge of the road, really, reeeaally hurts when it slaps you in the face as you whizz down a hill at speed. Another of life’s lessons!