Right…psyching up…the road is out there…the traffic is waiting and revving and roaring…time for a rush of adrenalin with a twist of good old fashioned fear! Onto the Roman roads we go, into the motorised mayhem!

The legs and lungs got a good wake up call after their week off, with a hilly street to climb first thing. Up we went, then down we went, past the already street-long line of people waiting to get into the Vatican, then the manoeuvre I dread as much as roundabouts…the left hand turn, in the left turn only lane, that leaves us sitting ducks in the middle of the road, as we wait for a break in traffic to zip across and make our turn. I’m always waiting for a driver to be more concerned with their phone, text, or personal appearance in their visor mirror, to notice a small bike and person in front of them, and hurtle straight into the back of me. Today we made all our turns unscathed, we crossed intersections without incident and eventually got onto a bike path. Phew!

The ride along the bike path was lovely, we had the morning light, the river beside us and the beautiful autumn colours of the trees overhead, giving us a golden ceiling to ride under and a golden carpet to pedal on. Simply lovely. There were a lot of runners and cyclists around, out for their Saturday morning workout and we received some smiles and thumbs-up. We passed many of the sites we had visited over the last few days. We rode past Circus Maximus and the Baths and turned a corner to see that the line of people at the Mouth of Truth, was already the length of the church that housed it. On we went. 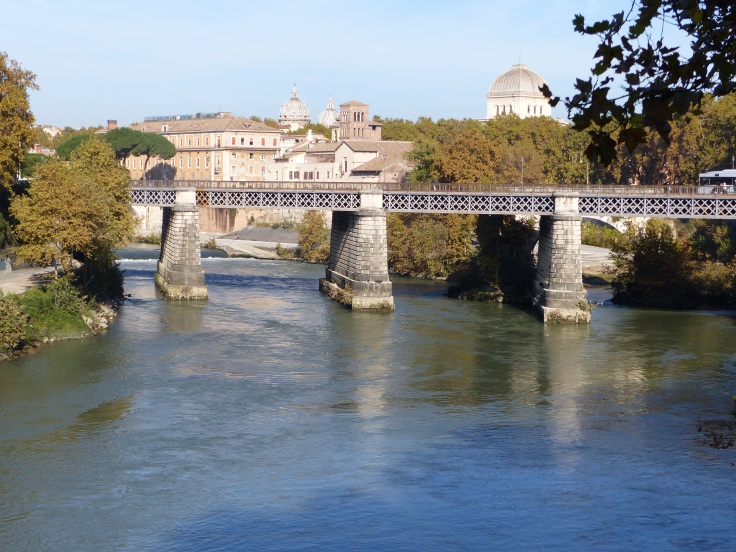 When we looked at possible routes last night, we decided to choose a route that would take the long way around, prolonging our arrival in Anzio. It meant some backtracking and zigzagging, but it would also take us through the Appian Way, which I had wanted to see, having read it was a nice place to visit.

We entered the Appian Way, passing the ancient crypts and catacombs and then onto the ancient road. The Appian Way (Via Appia Antica) was built in 312BC and was originally 563 km in length. It was an important road for enabling trade and access to Rome and has a somewhat chequered history. During the slave revolt, led by Spartacus in 73BC, the Roman army crucified 6000 slaves and lined the Appian Way with their bodies. Today, there was nothing but peace on this historic road. It was a top place to ride, because it was almost like the authentic Rome. It wasn’t crowded, there were ancient stone walls and ruins all around us, it was traffic free and we had green fields spread out before us. 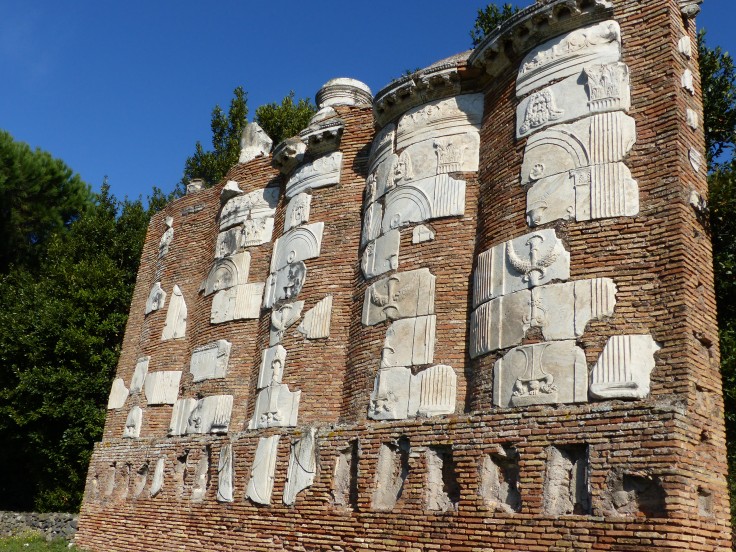 There was one downside…it was perhaps a little too authentic! The road was made of the original, large cobblestones, which were a bit like riding over large, flat boulders. In fact, we couldn’t ride on them, so we took to the dirt edge as much as we could, which put my less than gold standard balance skills to the test.

It was definitely a Roman road…straight, straight, straight! Not a twist, not a bend, not a corner, just kilometre after kilometre of bumpy cobbles in a dead straight line. It was worth taking the long way today, because this was a lovely place to see, no crowds, just other walkers and cyclists, and lovely old remnants of a Rome from bygone days.

We even saw something that we might have seen, had we been travelling the Appian Way a few centuries ago. A man came down the road, herding his flock of sheep, with his dogs. It was a fantastic sight, to see the road ahead of us completely full of wool, with the big dogs leisurely strolling along with the sheep, in no hurry and just keeping an eye on things. We stopped and waited for them to go past and found ourselves surrounded. Seeing them walk past, on that ancient cobbled road, was like standing in a moment of history.

We parked the bikes under a tree and parked ourselves on a dry stone wall for a spot of elevenses in the sunshine. Magic.

As we pedalled on, along the bumps and cobbles, our bumps suddenly increased considerably. The cobbled road ended and became a rocky, bumpy, totally unsealed, track. It was very slow going. We bumped and wobbled for a few more kilometres and then we were off the Appian Way completely and onto the busy highway. Back in the traffic and back on roads with monumental potholes. I considered myself lucky for avoiding a puncture again today, because I slammed into one huge, deep crater, which I couldn’t swerve around to avoid, because of the traffic beside me. Thankfully, the sturdy little bike held true and kept on rolling.

The start of the highway ride, also saw the start of a few navigational crazies. I don’t know what the GPS was thinking, or who created the map that the GPS was following, but it expected us to go along some roads that were clearly not intended for us.

Navigational Crazy #1: Go up this road on your left.  The “road” had metal gates, a number on the gate post, a letter box and a ‘For Sale’ sign. No, you plonker of a GPS, I don’t think so, I think this is a driveway!

Navigational Crazy #2: Now turn off the highway and take a right, up this road, which includes a large hill to climb. The road led us to a barrier and a high fence in front of us, with grass and scrub on the other side and a huge metal gate into a warehouse on our right. This is not a road, you complete turkey of a map! There is no road!

Navigational Crazy #3: Take another right, go down this hill to this dead end, that leads to more grass and scrubland! You idiot GPS, there’s a perfectly fine and normal road at the intersection 200m up ahead. This is not a road!! Now we just have to climb back up the hill we’ve just come down. Good on you!

Navigational Crazy #4: Now you’ve arrived in the town that is your destination, go up this road to get to your hotel. Well, that “road” was a driveway beside buildings, leading to a flight of steps! FAIR DINKUM!!!!! You stupid, idiotic, dodo excuse for a GPS!!!

So we had a few of those for half the ride! We did eventually take navigational matters into our own hands and we did get where we were supposed to go and we did find and check-in to the hotel. We had a small hiccup with the bikes there though. Two gentleman came out, very friendly and asking where we were from and leading the way to where we could store the bikes for the night. They turned a corner and I followed.

“There,” one of the men said, gesturing to the spot they were offering for the bikes.

The designated spot was…a drainpipe. Yep, a drainpipe on the side of the building. I think they thought we’d just lock the bikes to the pipe or something.

“Would there be somewhere inside?” I asked, feeling a little awkward.

There began a rapid conversation between the two men, while we stood there, trying to look like we weren’t trying to be a nuisance, while their Italian bounced back and forth. In the end, a solution was found and they very kindly stored the bikes in one of their offices for the night. We thanked them profusely for accommodating us and ensuring the security of our travel companions.

Our ride today involved some backtracking, some zig-zagging and definitely the long way around to get to where we ended up, and we clocked up 60km in the end. It was worth it to have some extra time on the bikes though. We also got another fine backside massage, as a special bonus, courtesy of the cobbles and rocks. We’ve had a few of those on-the-road “spa” treatments! Oh, and the sun shone again! Again! Day after day of sun!! Magnificent! Even rocks and wrong turns are a little more bearable when the sun shines! Another day on the roads tomorrow, another day of wondering what the mad maps and joke of a GPS will do to us. We’re heading to Anzio, but we could end up in Algeria, or Amsterdam, or Albuquerque!  Well, that’s what adventures are for I guess, to expect the unexpected. At least if we do end up off course, we have one tried and true piece of navigational wisdom to follow…we’ll listen to Bugs and remember to take that left turn at Albuquerque!