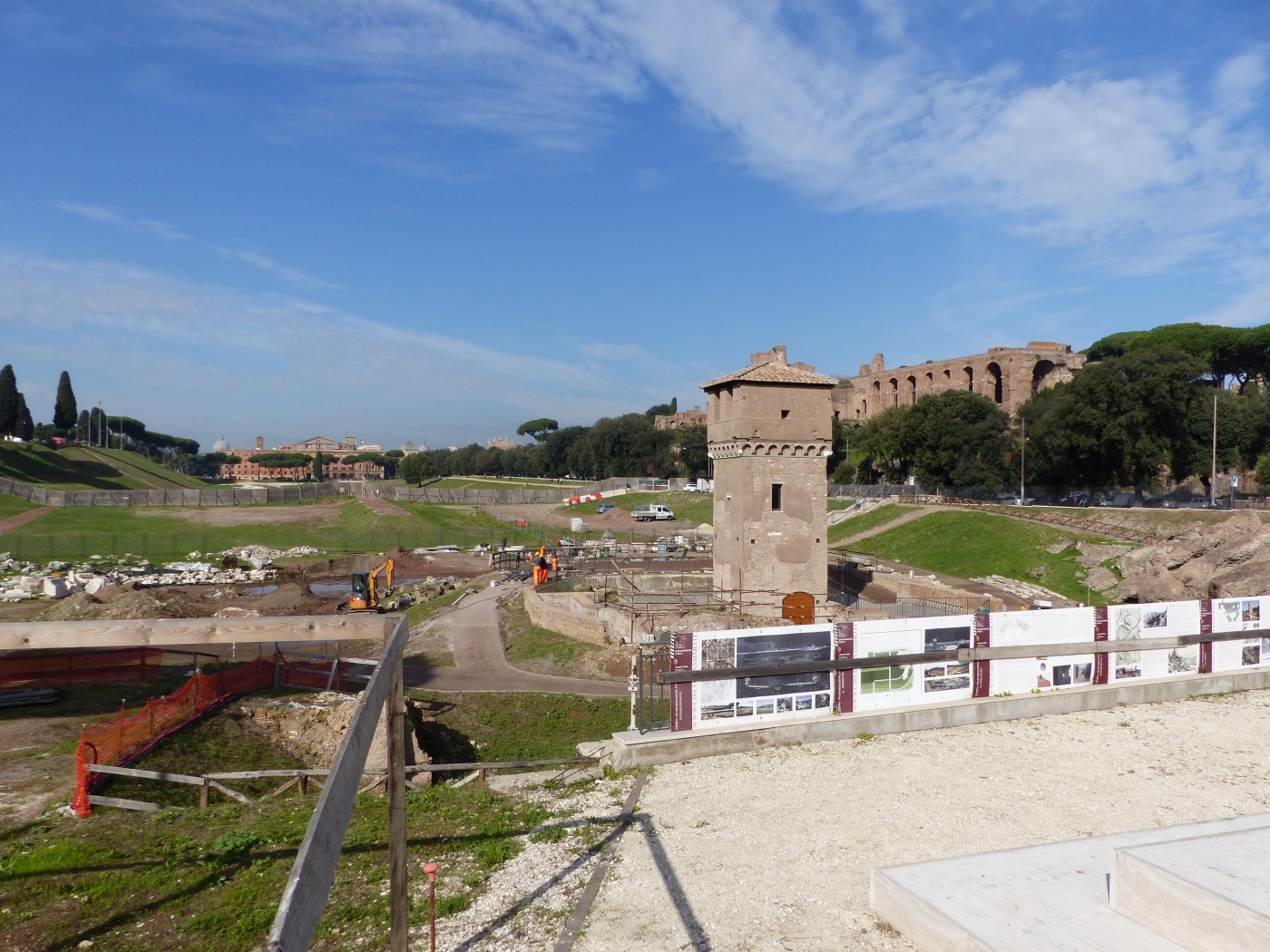 What on earth did the average Roman do for entertainment without a plethora of online options and opportunities? I mean, how did social life progress without a status update? Surely they must have been bored toga-less without a screen to swipe, tap or scroll. What did they do for fun!? I’ll tell you what they did…they went to the circus and had a bath!

Wednesday was our day for Roman entertainment.

“Come hither Biggius Stevius, let us be gone to the outer reaches of this grand city of Empire. Leave your olive leaf wreath to air in the cupboardius and don your capius, now let’s not tarry. I shall postpone my bath of asses milk and seek more boisterous entertainment to rock my toga. Onward we roamius…”

Circus Maximus, or as the locals like to call it, Circo Massimo, was the place to be for raucous entertainment. This was the location of the chariot races and under fantabulistic sunny skies, we ventured forth to roam this locale. Of course when we arrived, we couldn’t be surprised to see that half the site was blocked off by fencing and full of workmen! It has already been established that we have this effect on significant sites and attractions! Fountains…steps…obelisks…now the circus! We obviously failed in our quest for jinx-proof places to explore. Not to worry, we could still look and activate our imaginations to see the stadium this would once have been.

The circus games (chariot races) were huge public events and attracted massive crowds. They were traditionally opened by a ritual procession (a pompa) which, symbolically, led the Gods to watch the races. Then, when the chariots and drivers were ready (I don’t think the poor horses ever felt ready for what they were in for, but they didn’t get a say in it), the magistrate overseeing the event would drop a white handkerchief from the balcony and the chariots would be off and racing. There were usually four chariots competing and they had to do seven anti-clockwise laps of the track, around the end posts. These races had particular symbolic and religious features: the circus complex was a representation of the universe; the twelve doors of the starting gates, represented the zodiac’s constellations; the seven laps completed by each chariot, represented the  orbiting of the seven planets and the charioteer represented the sun. In each race, the four teams competing would wear robes of different colours (white, red, green and blue), which symbolised the four seasons. The races would go on all day and the winners, apart from the victor’s prize, would often become celebrities and idols, a bit like the Beckhams or Lebron Jameses of today. Over the years, the religious element to the events faded away and the races became real, competitive sporting events, attracting a large gambling and betting industry along with them. So…just like today, the sport began to become less about the sport and more about the business that goes along with the sport! So began a small chip in the crumbling stone of moral principles in Roman society.

We strolled up and down the area that held the arena, forming mental images of what the events would have been like in sight and sound. That was our first dose of Roman entertainment for the day. After a lively day at the races, it was time to hit the baths!

The Baths of Caracalla were a public bathing facility, housed in a huge and grand complex, which in its day, could accommodate 1600 people. Emperor Caracalla had them built in 216CE . This is something the Emperors did – keep the people happy and supportive of you and your seat in power, by providing them with facilities for entertainment, hygiene and relaxation. These baths were particularly interesting because they also had two libraries and shops within the complex. It was a complex that included sporting facilities and the baths for people to relax, socialise and take a dip after a sweaty session on the pommel horse.

It was easy to walk around and imagine these remains, as a complete and operational bathhouse. It was again staggering to see just how huge everything was. We’ve visited many historic buildings in different places and Steve has often found that he’s had to duck, stoop, bend and bob his way through history, finding that buildings were definitely not built for folks of his stature. No problems here though, Roman buildings are most definitely Steve-friendly in their size and design!

The baths had steam rooms, hot baths and “frigidariums”, which was of course, the cold water plunge! Furnaces and cauldrons were used to heat the water. The rooms would have been lavish and ornate too, and we could see some remaining evidence of the mosaics and decorative columns that would have decorated the interior.

In fact, the frigidarium was a huge hall, similar to a basilica and that great hall, in these baths, were the inspiration for the interior design of Penn Station in New York and  the Chicago Union Station, with the architects of these buildings in the 1800’s, copying the design of the frigidarium in the Baths of Caracalla, exactly. 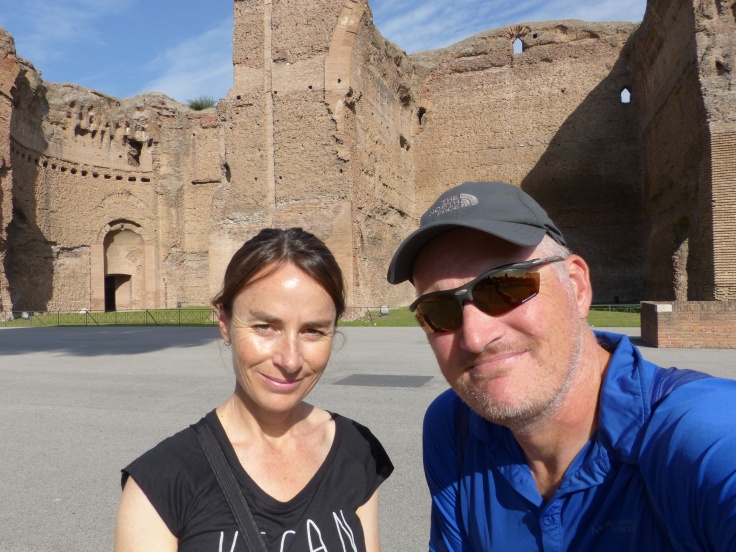 I love it when you see the remains of something that gives you a real insight into the happenings in a place. When we see small things, that are a mark left by the people who walked before us, centuries ago, it’s fascinating. We saw that today in the form of a game. Apparently Romans liked board games and they found a way to play them, even when they didn’t have a table and were taking a soak in a hot pool. While seated in the water, they used the edge of the pool to play a game called tropa or “hole game”, which was played with walnuts, marbles or knucklebones. The aim was to get a walnut into each of the hollows, in a particular order and then get the last one across the line. The remains of one of these games is still there, in the marble that would have once been the edge of the pool. The holes are there, where the nuts would have been moved around, the line can be seen that was the “finish line” for getting your set of marbles or walnuts around the board. There were even some letters visible, which you can see on the far right hand side of the photo and these loosely translate as “You do not know, you cry, you move, you will be careful” which were probably jokes exchanged between opponents during the game. Fascinating and amazing to see something as “ordinary” as that still there.

We roamed the walls and grounds of this enormous complex, imagining this area in its heyday and soaking up the spectacular sun. Then we walked ourselves back towards the city, stopped in a park for a quick lunch, then roamed some more along the streets before making our way to our apartment. As we walked back we saw some more amazing buildings from centuries past and we also did another sweep of the Colosseum, just because it was there!

That was our day of entertainment, Roman style! A morning spent at the chariot races and then an afternoon at the baths. How leisurely and relaxing. We did some more roaming, some more exploring and discovering and some more learning. Top day, with some more pages of the Roman story having been turned, as we continue to absorb this epic saga.

We did discover something else though, as we were walking back. Even though the Romans had all of these amazing forms of entertainment, the circus games and the grand bath houses, even with all of that…some people just can’t live without their mobile phones!!! 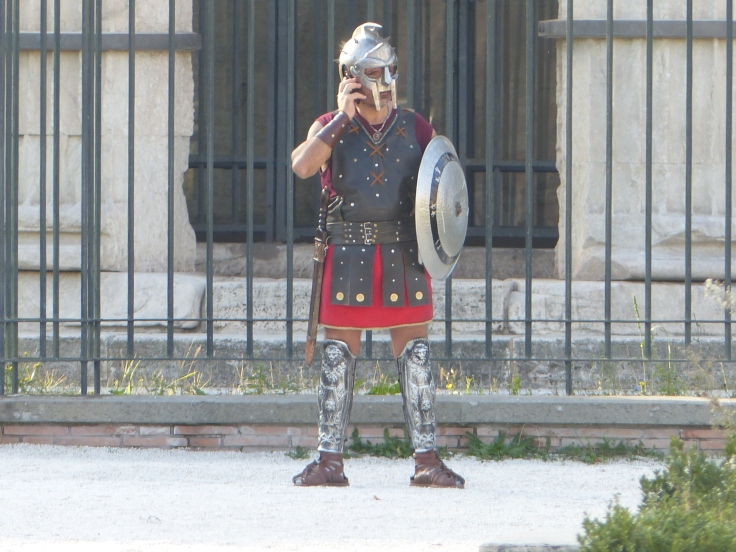 2 thoughts on “Before There Were Online Streaming Twitter Blog Bars…”