Fear not, I shall not break into a poor attempt at a Britney Spears song, however we did have yet another negative effect on some local attractions. Why do we have this effect on our surroundings, I ask myself with some vexation!?

A day of freestylin’, that’s what we need. Just some freestyle roaming, without a definite plan for the day, just some random strolling…let’s do that. First up was the Metro. After a couple of full days of walking here and there about the city, we thought we’d see what the Rome underground was like. Off we plodded, into yet another day of spectacular sunshine (Christmas on a stick!) and made our way to the M, where we left the radiant light and solar sparkle and descended into the bowels of the city. I think the underground was, in some way, a beautiful example of the Italian approach to life. The Rome subway system only has two lines. They are currently working on putting in a third line. The date for completion of this third line was…the year 2000! Yep, it’s just a little behind schedule! The revised completion timeline is now 2018, but there have been several changes and delays over the years. We’ve picked up a definite “she’ll be right mate” vibe here. Nothing is terribly precise, nothing is hurried (except the drivers) and rules seem to be there as mere suggestions, rather than things to be adhered to. So, when I heard about the, so far, fifteen year delay on completing a rail line, I did smile, it seemed to be so right for the way things are done!

We emerged from the dim underground, into the shimmering sun, just a short stroll from the Spanish Steps. Off we trotted to see yet another iconic Roman landmark. Oh dear…as we arrived at the famous steps, it was to see…closed! Yep, steps not open for climbing, steps surrounded by fencing, steps most definitely not at their finest. How perfectly “us”! After seeing the empty Trevi Fountain, now here we were at the Spanish Steps, only to find we couldn’t set foot on them. We had done it again! If we’re not draining fountains or reflecting pools, we’re putting fences around landmarks and closing them to the public! If something is famous or iconic and a “must see”, you can bet if we’re around, it won’t be there to see at all! On the plus side though, the fountain near the steps, had water in it!

We strolled around the square for a while, then turned up a side lane beside the Metro and found a set of steps we could actually climb. They were almost alongside the Spanish set, so we marched ourselves up them and declared them our very own version of the famous ones.

On the way to these steps, we did see something that caught our attention. We saw a shop that sold Blunnies! That perfectly Tasmanian item of footwear, was right there, on sale in Rome! Fancy! 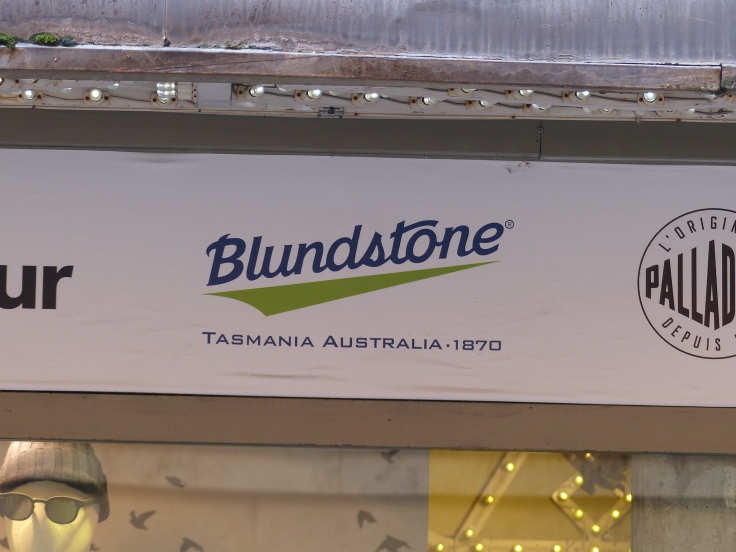 At the top of the steps, we crossed the street to another set of steps, that led to another lovely view and lovely church. We stood and gazed at the city vistas again, then quietly stepped into the hushed interior of the Trinita dei Monti.  This wasn’t anywhere near as grand or ornate as others we’ve been in, but was still beautiful, particularly its frescos. 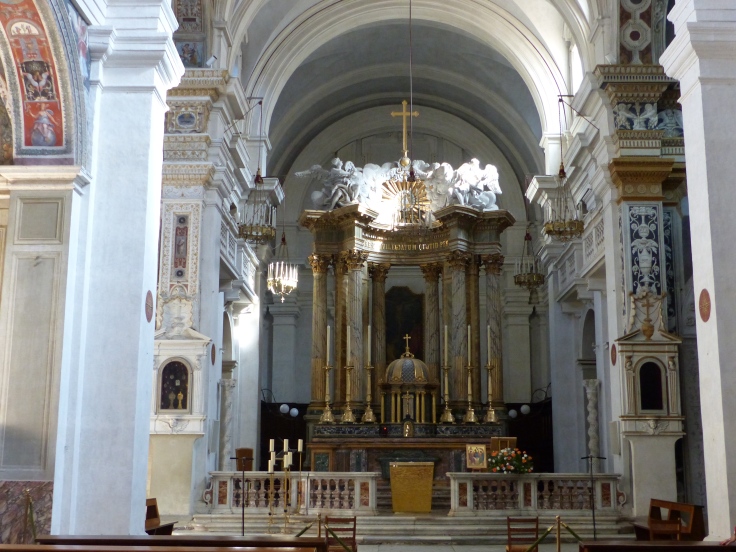 With the day being as glorious as it was, it would be made even more so, if we could find a park to stroll in. Our carefree, freestylin’ ways took us up the hill, where we found ourselves in the parks and gardens of Villa Borghese. What a perfect place to stroll in the sunshine. It actually felt like strolling in a French park and we commented on the similarities to the Tuilerie Gardens in Paris, with the wide paths and design. We had a lovely stroll among the trees and along the paths and then set off back down the hill, to have a look at Piazza Popolo, which had another fountain worth a look, surrounding a lofty obelisk. 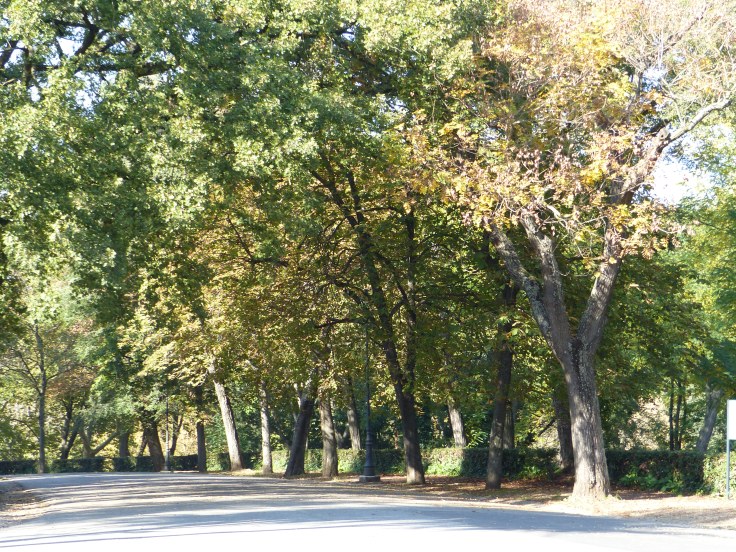 As we looked down onto the Piazza…what! You’ve got to be joking! What is it with us!? Yep, the fountain was empty and closed off with fencing! We had done it again…yet again! No fountain to be seen, just the fence. I think we should be put on some sort of Debbie Downer tourist watch list! Oh well, we strolled around the Piazza and had a look at…the fence!

From there, we just strolled and roamed around the streets for a while, staying far, far, far away from any iconic landmarks, for fear of spoiling some poor visitor’s view or experience and then headed back to the Metro. We passed the Spanish Steps again, and the square was now full of tourist groups and people with bags of wine and cheese. It seemed everyone had turned up to partake in that “must do” activity, sitting on the Spanish Steps at sunset. Oh dear, I don’t think they got the bulletin that we were in town…the steps were closed, so no sitting or sunset gazing would be possible. At least a few of them had a bottle or two for drowning their disappointment.

It was fun today, doing some freestyle strolling, some improv perambulation and random roaming. It was wonderful to be out in the sunshine again. We did laugh though, at how relative temperature is. It was a lovely and warm 22C, so we were in shorts and short trousers and t-shirts before too long, but nearly everyone else was in puffer jackets, boots and scarves! We did see some people in short sleeves and some in shorts, so we guessed if they weren’t Tasmanian, they’d have to be British, because they’d be thinking 22C was balmy too!

Tomorrow we’ll continue our roaming of Rome. We’re not sure where, we’re a bit worried about jinxing the places we visit! We’ll just have to avoid fountains…actually anything with water…and steps…and maybe obelisks too…Time to look at the map and find some jinx-proof locations to explore!