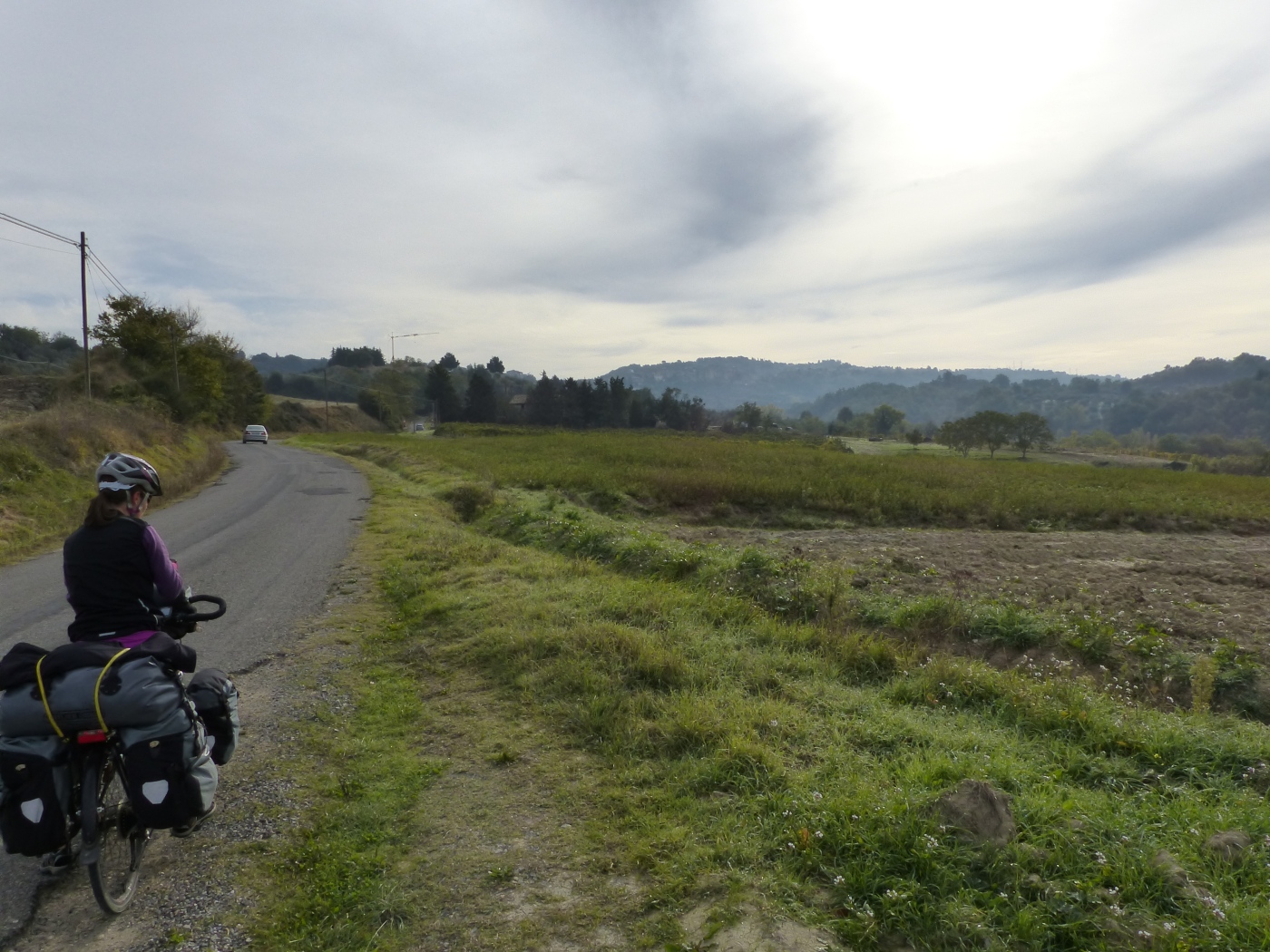 We put the clocks back an hour last night, so Daylight Savings is over and the days will draw in faster than ever now. We did at least get a warm up this morning I suppose. It was a very cold morning, but at least we got to warm up the muscles for 3km before the hills hit us.

We rode out of Fabro, in the very chilly air, and for the first 3km, we pedalled through the streets and out onto the country roads. Then…the hills started. Then…for the next 8km, it was a straight up climb, 8km of up, up, up. There was no gradual easing down of the gears this morning, it was straight into low-low right from the start, with a 14% gradient from the very beginning of the climb. It was tough going. So began the slow uphill grind. We did stop a few times, just so we could pause and look at the views because they were magic. 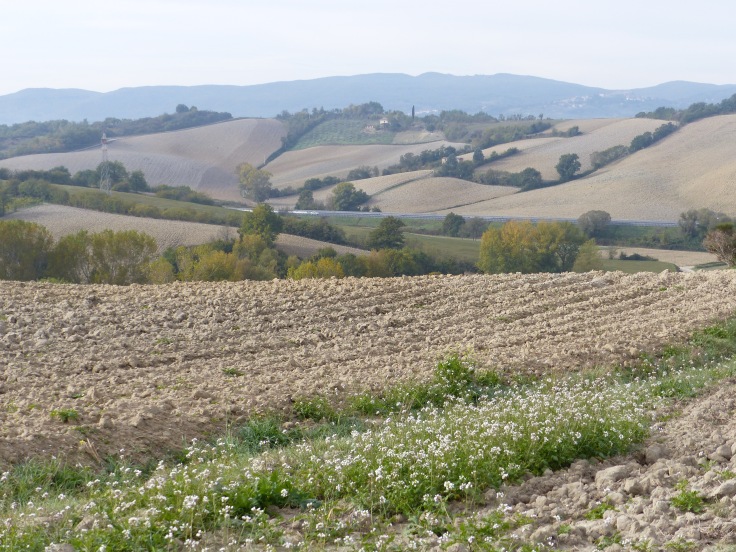 “This is why we climb hills,” I said to Steve. The scenery and colours stretching out around and below us were just beautiful. 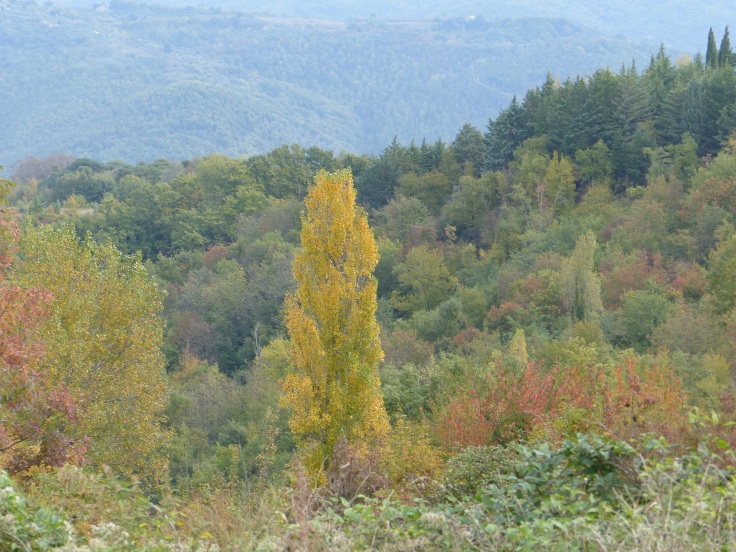 We implemented our usual team play today, with me taking the lead on the uphills, then waiting for Steve at the top and handing over to him for the downhill. When we eventually made it to the top of the climb, I pulled over and when Steve caught up, I waited for him to begin his downhill thrill ride. Wheeeeeee!!! Off he went, and while I made good use of the disc brakes, all I could see in the distance was a small, blurred dot, speeding around the corners ahead of me. Then Steve waited at the bottom for me and off we went again.

I’d almost frozen solid on the ride down, in the cold air, after heating up on the climb, then having the wind rush of the downhill. I started looking for a spot to pull over, so I could get changed and put some warm, dry layers on. Steve pulled over near a forest. “You could get changed here,” he suggested.

“Is there any more climbing?” I asked, “I don’t want to get changed if I’m only going to get all hot and then cold again.”

“No more climbing,” he reassured me, “we just ride through the valley now.”

I would have started to get changed there, if it hadn’t been for the gunshots that started ringing out in the forest beside us. “I don’t want to stop here,” I said, as I put foot to pedal. I wanted to get away from there as soon and as fast as I could. I didn’t like those shots around me and some of them were really loud and sounded really close.

We had just gone a few hundred metres down the road, turned a corner and what did we have in front of us? A hill! Another winding hill, of the very uphill variety!

“I’m not believing you anymore!!!” I shouted to Steve. A brief recap…on our ride towards Florence, we’d been climbing all day and after lunch Steve said, “It’s all downhill from here.” Then, immediately after he said that, we were presented with the steepest hill of the day. Then, when we got to the top of that, he said, “The good news is, that was our final climb.” It wasn’t! The hills kept coming! Then, when we rode out of Florence, he told me we’d have 200m of climbing. It ended up being over twice that!

As I put our team tactic into action and rode past Steve on this new hill, I said, “That’s it! It’s YOU! You are officially the team jinx!” I’d been accused of jinxing us in England, with my thoughts about weather or mud, but I am now handing over that title and pinning that badge firmly to Steve’s chest! I told him he’d be kicked out of the army or the Secret Service, because his intel is lousy!

So…we kept on climbing and that hill wasn’t the last one either. We still had a few more to come! So we had another day on the hills! The scenery continued to be lovely though and the autumn colours gave us a real oil painting. It was gorgeous. 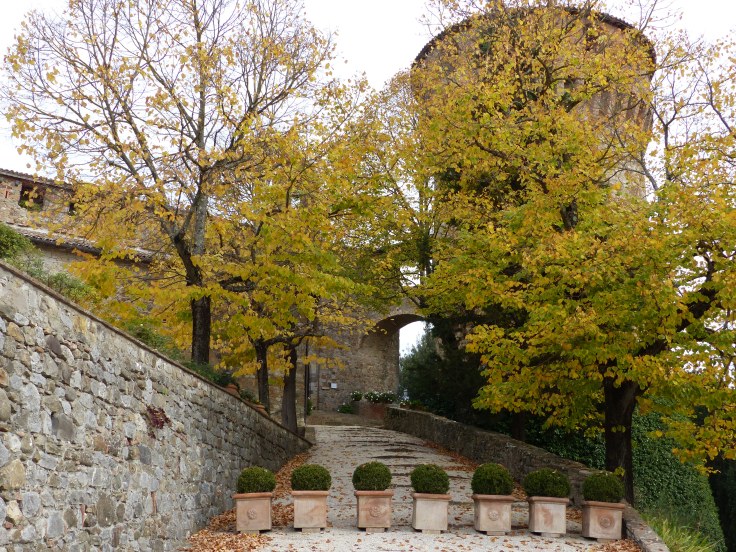 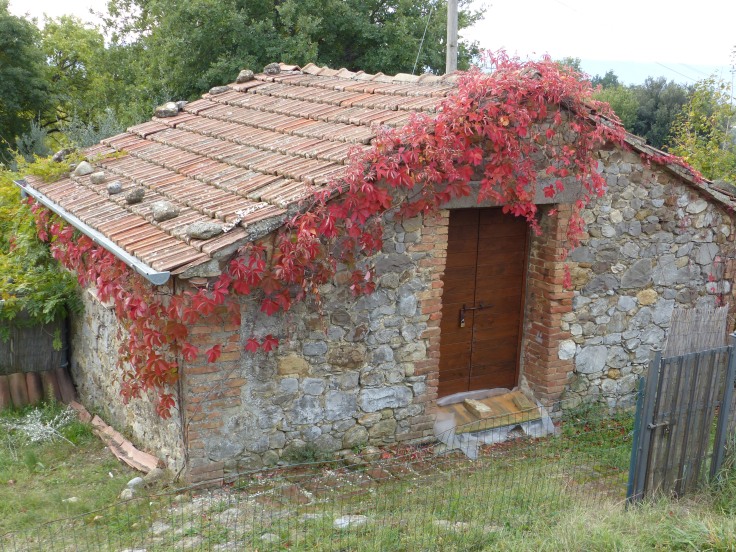 We came to the outskirts of Orvieto, which was to be our destination for the day, and stopped for elevenses on the side of the road, looking up at the Old Town, way up high.

Orvieto is a medieval town on top of a hill. The hill up to the town is so steep, there’s a funicular to take people up! Needless to say, we weren’t in a hurry to pedal up something like that, so we found some accommodation at the foot of the hill instead! Orvieto Scarlo is the part of town in the valley below the Old Town, but of course our hotel had to be on the only hill in that part of town! It was part way up the hill to Orvieto, so we still had to finish our day of climbing, with some puffing up a final hill! We had only ridden 34km though, so I guess we needed a final workout.

That was the day. Another one that felt like pressing weights with the ol’ legs, a day to harden up the quads a bit more. Those hills were constant and they were toughies. We got it done though. We got to the top and Steve got to have his adrenalin rush to the bottom. I also got to hand over my title of jinx. I will hear no more about it! ’Tis not I who brings the misfortune, trials and challenges to our wheels, it is now officially the Big Fella who does that! It’s the larger team member who has brought hilly hardships upon us! The jinx has been officially crowned!

Tomorrow we’ll spend some time exploring Orvieto, which is supposed to have a nice Old Town and an underground city. Now…what would be the most fun way to get there, I wonder? A fun walk up the hill? A fun run up that hill? Or…the funicular? I’ll keep you posted on the fun factor!

2 thoughts on “Would The Official Team Jinx Please Stand Up”