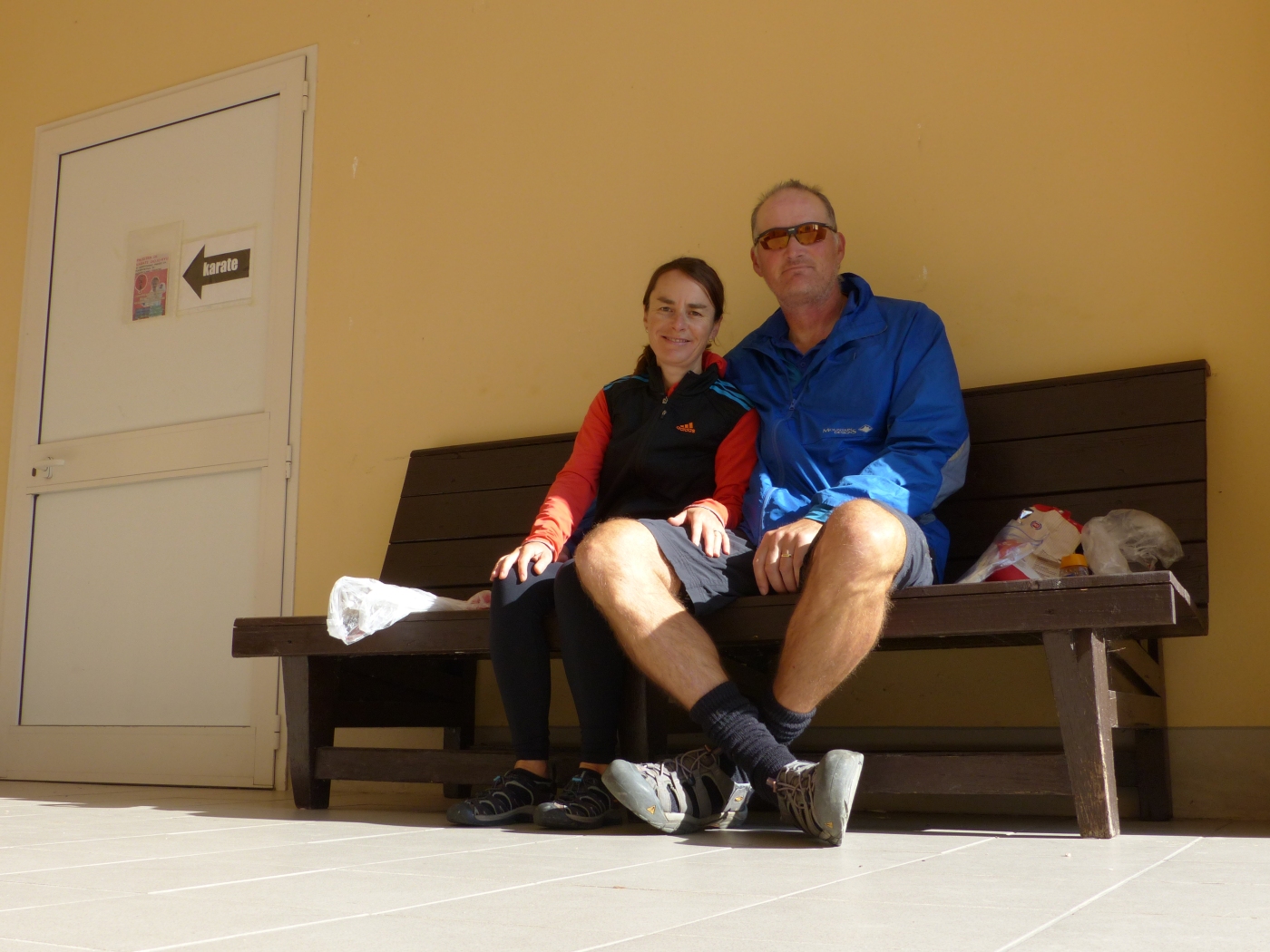 When I looked outside this morning, it was to see sunshine and clear sky, but…the trees were flapping and swaying like they were being shaken by a huge, unseen hand. It was windy! We packed up and pedalled out into another cool, but not too chilly, morning and set off along the road. All praise the cycling fairies! That blowing wind was actually on our tail! Unbelievable! So, wind assisted, we pedalled along, with the trucks and cars by our side and settled into a rhythmic cadence.

We pulled over into a row of shops beside the road, to get some water and as we parked the bikes, an elderly man in his winter coat and flat cap, stopped to talk to us. Of course we couldn’t understand him, so we apologised again for not speaking Italian. “Parlo Inglese,” we explained.

He seemed quite pleased to hear that. “Australia! he said.

The man seemed to be asking if we’d come far.

“Si, Firenze and all around. Spagna, Francia, all around,” I explained, making large gestures to try and encompass in one, incomprehensible circular sweep of my arm, that we had been riding around Europe.

“Spagna!” he asked, almost in disbelief.

“Si, all around,” I said again with that movement of my arm, as if my words and gestures that made no sense the first time, would have somehow taken on an non-verbal international language of their own, the second time around.

The man then pointed to Steve’s feet and pointed to my feet. He smiled and said something we couldn’t understand, but I took to mean, “And you’ve done it wearing THOSE!!”

We’d done it again. This pair of travelling fashion comedians had brought mirth and entertainment to the locals, by their mere presence and thigh-slapping hilarious appearance! This time it was our sandals (albeit accompanied by socks in both our cases) that had done the trick with the travelling road show of fun and frivolity! We had certainly given this man a smile for the day and a moment of comedic disbelief, that we could be seen in public wearing such an unbelievable choice of footwear! We exchanged “Arriverderci’s” and continued on our way.

After some more shared travel with the cars and trucks, we pulled over when we saw a small park beside a building and sought out a place for elevenses. The building was some sort of sports facility and a big banner hung from the entrance with the picture and name of Daniele Bennati, whose home town we seemed to be in. I didn’t know who he was, but Steve said he’s a sprinter who rides in international tours and has ridden the Tour de France, so it appeared we were in cycling celebrity territory. We found a seat in the entrance, out of the wind and had our daily elevenses.

On we went. The ride had been fairly flat, with some ups to contend with, but I’d call them ‘inclines’ more than hills, compared to what we’d been riding. All in all, there wasn’t too much climbing at all, which was a nice respite. However, not long after leaving our elevenses spot, it seemed the cycling fairies had decided to leave us and go and sprinkle their dust on someone else. In their place, the cycling gremlins had arrived, cranking the wind up to full velocity and blowing it straight in our faces. Now it was hard going. With wind like that, we might as well be riding up hills because down went my gears and down went my head, as I just battled against the force of that headwind. At one point I had to make a big, evasive swerve when a particularly strong side gust pushed me perilously close to the deep ditch on the side of the road. Luckily there wasn’t any traffic beside me at the time of this evasive manoeuvre, so I avoided a date with the ditch and a dent from a Daewoo.

We powered on, with the wind pushing and shoving and the gremlins laughing at our expense, but the tricky conditions couldn’t detract from some of the scenery we had around us. In those occasional moments when I felt secure enough to look to my side, I could see the towns and buildings dotting the hillside and it looked spectacular. I could see towers and castles and would call out to Steve, “Look left! Look ahead and left!” and we would both take in the amazing view and stop when we could for a photo, as the trucks rocketed past. 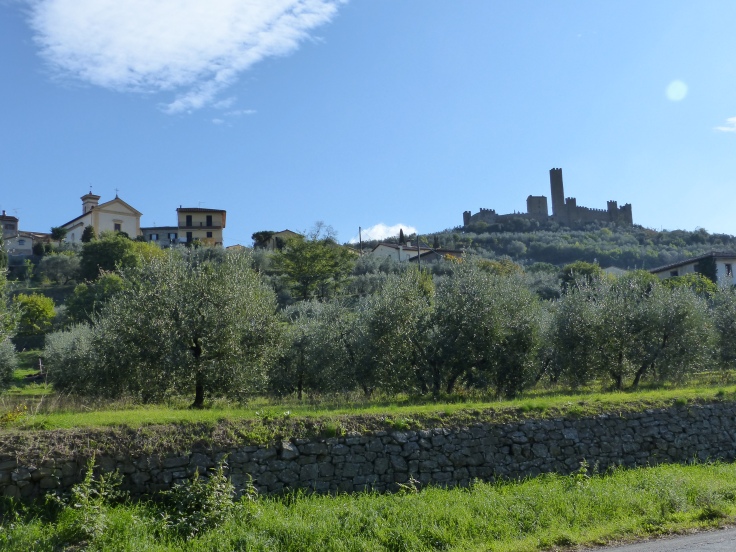 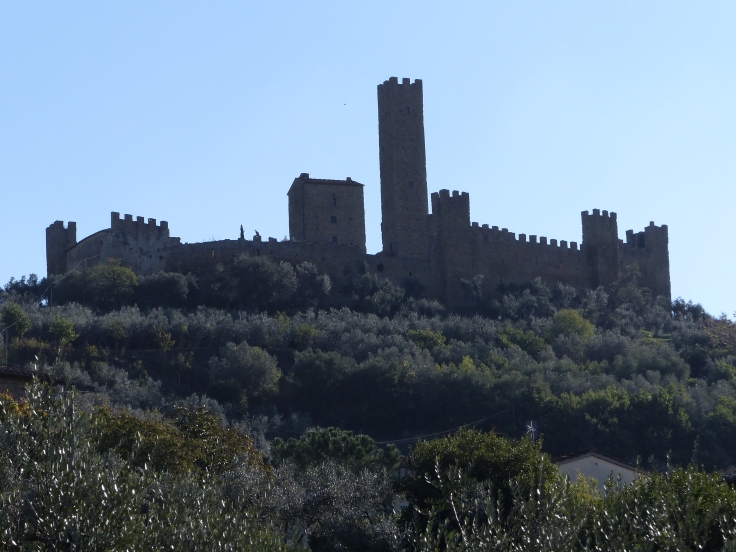 The town of Castiglione del Lago appeared and this was to be our pitstop today. We’d only ridden 47km and it was only 1:00pm, but we were stopping anyway, after looking at the maps last night and finding some long gaps between accommodation and supply options. This seemed as good a place as any to stop for the day. We checked into our very basic hotel, settled in and had some lunch, before freshening up from our blustery and busy ride.

It was a good day and a good ride, even with the wind and the traffic. We didn’t have any big hills and we still had some nice views and we crossed over from Tuscany into Umbria. We also brought smiles and morning mirth to an elderly local, albeit unintentionally! Well, now I think I’d better go and have words with my trusty Keens sandals, who I think may be feeling a dent to their ego. Poor soles (pun intended!), they don’t mean to be so amusing, I’m sure they think they are powerfully practical and fabulously functional, but with this morning’s response from our gentleman, they may be a little more aware of their fashion flaws. Time for some therapy I think…time to put them on the couch and reassure them that fashion isn’t everything! It’s OK my trusty footwear friends, Prada you may not be, but you’ll do me, you’ll do me just fine. Plus, there’s something to be said for bringing smiles to the masses…let’s keep doing that!