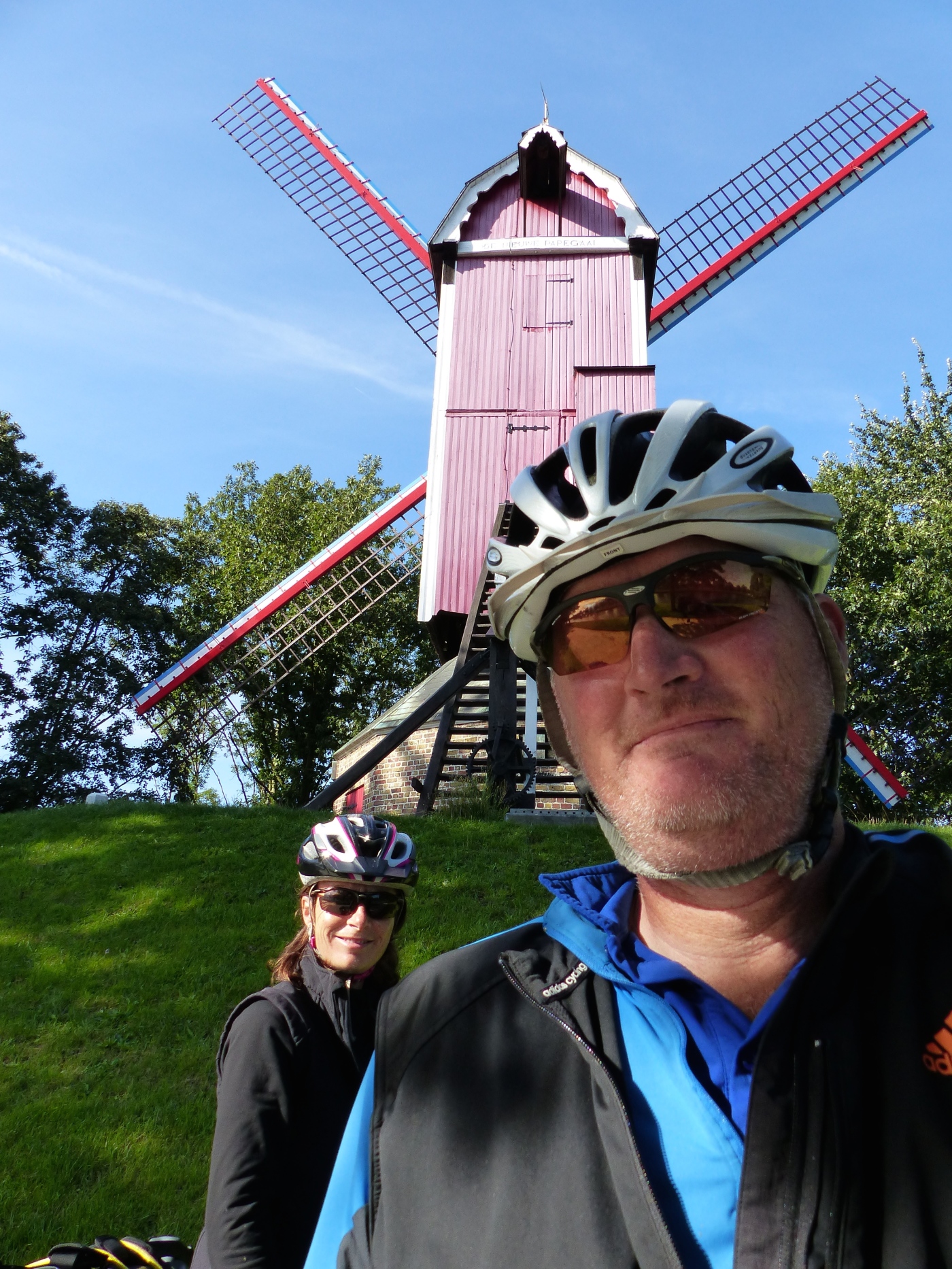 Well, we lost a member of our team today. Our companion that has worked so tirelessly to record magic moments, sights and scenes, weather events and daily elevenses, did  not recover from its ailments and this morning, finally passed away. Farewell, you’ve been a champion.

The sad demise of the camera meant we had to make an unplanned and unanticipated trip to an electronics store to find a replacement. We pedalled off though the parks and streets of Brugge, to find the store and I waited outside with the bikes while Steve went in to find the replacement that we had seen online, hoping they would have one in stock. He soon emerged successful. We now have an exact match for our dear departed camera – same brand, same model, same in every way, except this one is living and working. So just as we sadly said goodbye to our faithful team member, we welcome a new member, the sibling of camera number one. I hope this one fills the shoes of the previous one and captures our golden moments with comparable style.

After collecting our new team member and some supplies at the supermarket next door, we pedalled on, now leaving Brugge a lot later than we had intended. We rode through a very nice park and gave the new camera a test run.

The path continued on, beside the road and out of traffic, which was fantastic and the sun was shining which was ‘Breeyant’ with a capital B! We stopped at a bench by the path for some elevenses, before powering on towards Oustend.

The path we had was perfect. We rode beside a canal, the path was wide and sealed and smooth, the sun shone and we actually had a tail wind! We made up some of our lost time and pedalled into Oustend in time to find a nice spot for lunch. A park appeared and a short pedal though the greenery revealed a lovely big lake, with benches in prime positions in the sun. That was the spot for us! It was delightful, sitting in the warmth, looking at the sun glinting on the water and enjoying the nice surroundings.

Oustend is a seaside town and obviously a drawcard for tourists and holiday makers. We rode along the wide promenade beside the beach, with tourists strolling beside us, the beach huts lining the sand and the souvenir shops begging for some trade. It reminded us a little of a Belgian version of Weston-Super-Mare! It was so nice though, to ride beside the beach, looking across at the waves rolling in and the people out on the sand, cooking themselves from rare, to medium, to well done. 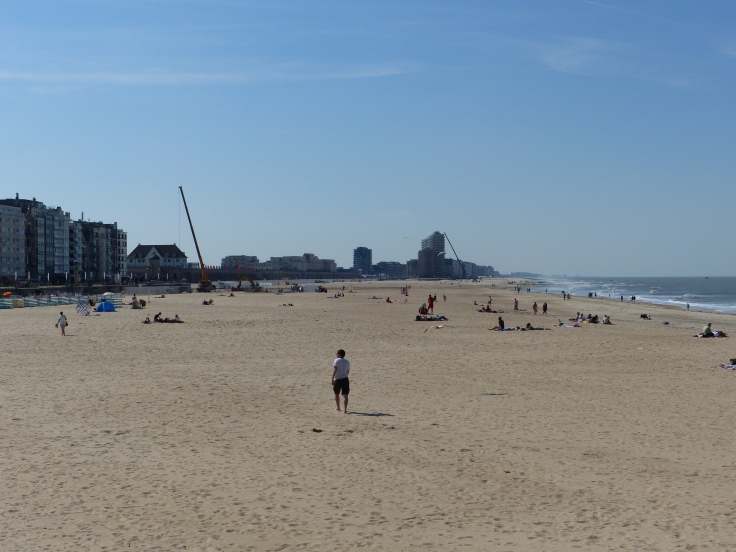 I began to notice stars with names, set into the promenade, as we cycled through and then noticed a name I recognised. John Nettles. Inspector Barnaby! My favourite British crime TV inspector who solves the many and constant Midsomer Murders. It seemed that many famous people had been to Oustend for the annual Film Festival and then had their names set into the Oustend Walk of Fame! I saw Pierce Brosnan, Lauren Holly, Ben Elton and Rik Mayall, to name a few. So Oustend is the place to be in the film world it seems! 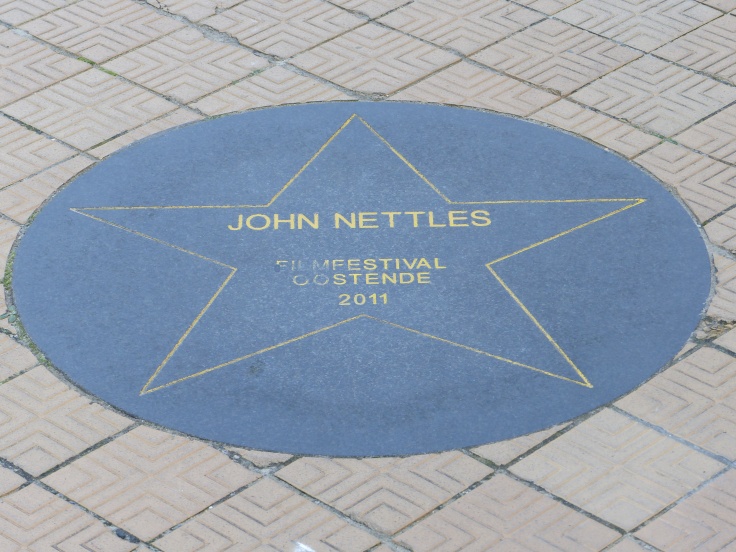 Our pedalling took us past a public toilet, and since these conveniences are few and far between, I decided to make use of the facilities. I checked the price, collected the necessary change from my bag and set off across the promenade. I said hello to the lady attendant, who was supervising the toiletten and collecting the money. There she was, sitting at her little table in the entrance to the small, concrete building, with a plate of €0.50 pieces from previous patrons sitting in front of her and beside that, a plate with a Mount Everest of walnut shells! Blaring around her was the most ear piercing and mind numbing, piped music of various pop hits and hip-hop. When faced with these challenges…a somewhat tedious task of sitting for hours on end, supervising a public convenience, while having one’s ear drums slowly desiccating… do what’s necessary…crack a walnut! She smiled and took my €0.50, then showed me where the wash basin was when I had trouble finding it behind a wall and all the time the walnut shell mountain, grew and grew, without collapsing. What a lady! What a trouper! Life can be tough, but smile and crack a walnut! Jobs can be tedious, but the time can be better enjoyed by cracking a walnut! Surroundings can be uncomfortable or less than pleasant, but those surroundings can be endured by smiling and cracking a walnut! I smiled and said goodbye to this stoic lady and left her to her task of building a walnut shell mountain and consuming her vast quantities of walnuts. I will remember the message that she may not have intended to give, but I heard nonetheless…when things seem tough, there’s always something to do to make those tough things more bearable. I just need to fit a nut cracker to my handlebars!

The sea continued to give us a superb view and we continued to enjoy the passing company of varied tourists, before riding into Raversyde, a location to which we were making a passing visit. Pat, from Mechelen, had two tickets to a historic site, which she was unable to use, so in her unending generosity, she gave them to us. The site was a former fishing village, and is 500 years old. An archeological dig had discovered remains of the village and as the stones and bricks were discovered, they were used to rebuild the houses as they would have been in their original form. There were three houses to see and walk through and it was such an interesting insight into life at that time and in that place. We saw where a ship builder would have lived, a baker and a middle class family. This community of fishermen and their families, would have originally lived right on the beach. Over the years though, with the shifting dunes, they were forced to move the village further back from the shore. The site also had a museum and part of the archaeological dig, where we could see how the artefacts were being dug up. It was fascinating. 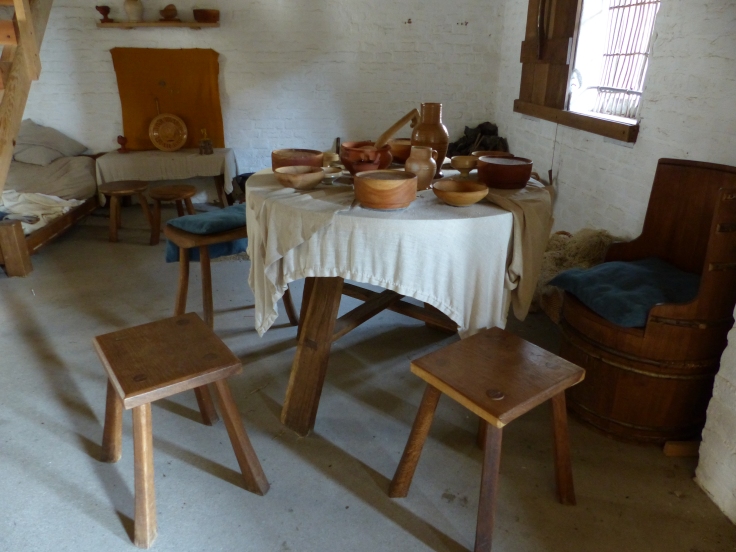 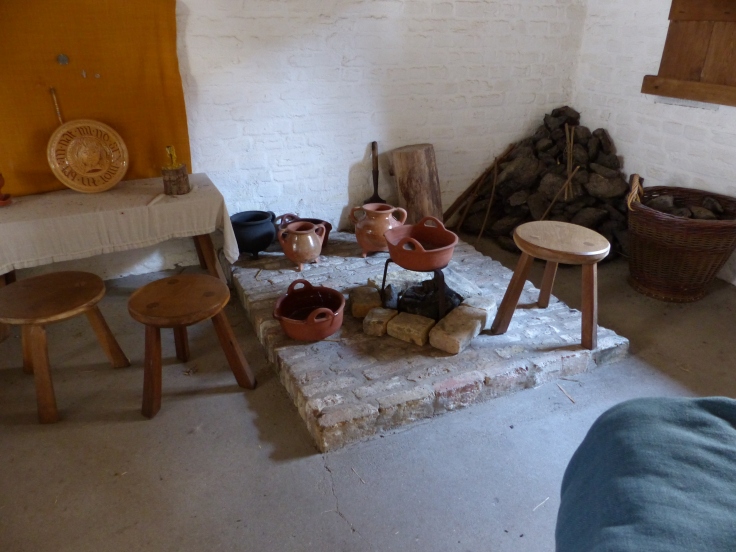 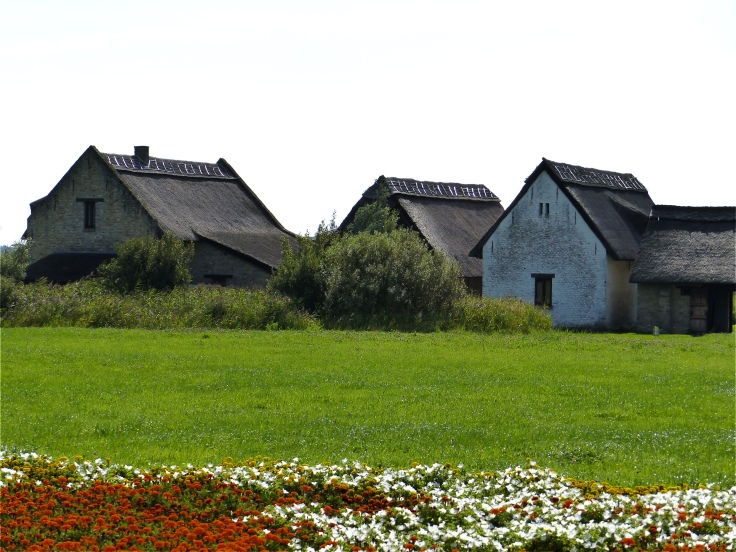 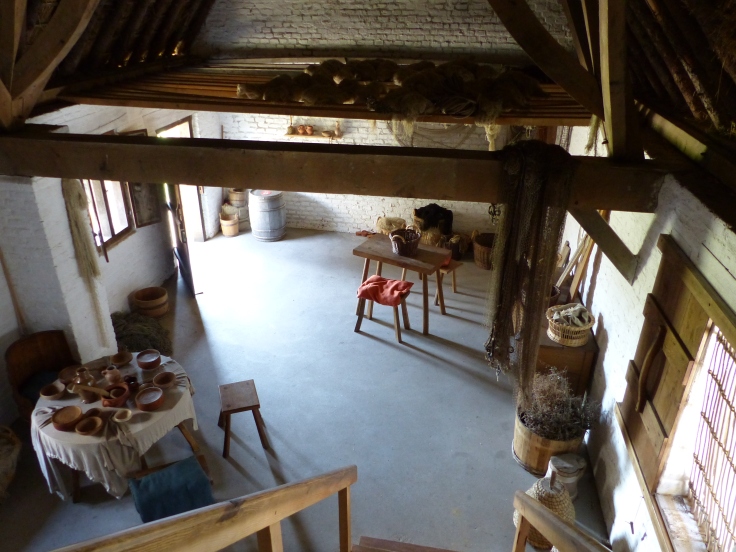 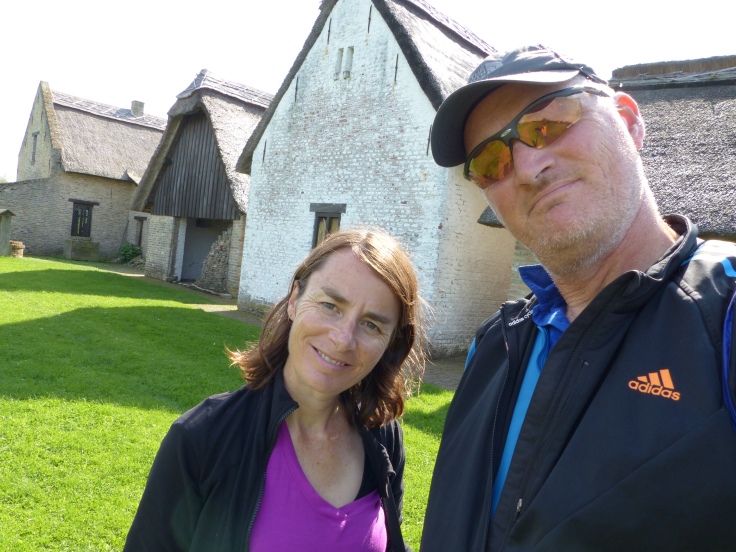 Walking through the houses though, we discovered, yet again, that people from hundreds of years ago were obviously closer to my height than Steve’s! I felt quite average sized, walking through the doorways and under the low beams, but Steve was head and shoulders too tall to walk around without stooping. 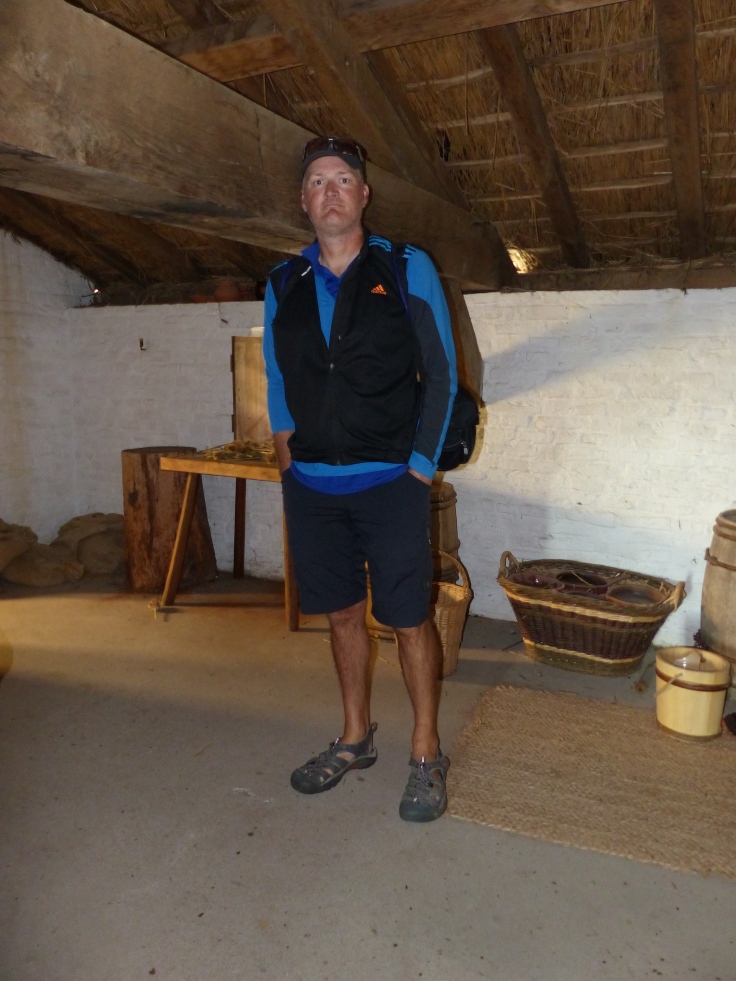 If he had lived at that time, or was transported back to that time, it would be something like Gulliver appearing in the town of Lilliput! The big, strange giant, roaming amongst the small townsfolk. I can just see Steve, sitting on his grand, wooden, carved chair, being admired for his strangeness and size and while he sat, he would issue orders.

Banging his fist on his wooden throne he would demand, “Bring me a pain au chocolat or I’ll hit you with my bommy knocker!” So the townsfolk would scurry to find the requested pastry and present it humbly to their giant visitor.

“Here, we present to you, oh lord of the flaky puff, a selection of pastries for your munching pleasure.”

“Hmph! Bring me a waffle…with sugar…and chocolate, or I’ll hit you with my bommy knocker.”

The people ran hither and thither, beating batter and whipping up waffles for their demanding, large scale, guest.

“We have succeeded, oh grand and mighty consumer of the baked and waffled treats, we place before you a selection of warmed waffles with an array of spreads and syrups for your regal consumption.”

What a time the big fella would have had, as the one and only tall and towering townsperson!

With late afternoon  well and truly upon us, it was time to find a campsite. Our information had told us these were plentiful in the area, so we set off to make a choice. Easier said than done, we soon discovered. We rode along, passing many and stopping to enquire in some as we went…dodgy…dodgy…no tents…no tents…reception closed even though the hours on the door say it should be open, so no one around to check us in…no tents…reception closed…reception closed…Fair dinkum! We were surrounded by sites and couldn’t find one to take us. The closed receptions were getting frustrating because the sites were clearly open, with campers and cars around, but everything else was closed up, so no one to tell us if we could pitch or not. We rode on…and on…and on…This was beginning to feel like the desperation accommodation safaris we’d been on all too often, five moths ago. Finally, we found one in Westende and after a lot of pedalling around the site, trying to find the reception, we eventually located it and had ourselves a pitch. We were back to sites with no wifi, no toilet paper and no hot water in wash basins, but at least we could pitch the tent. Sorted!

Our site did have a big plus in its favour though. Just across the way from us, a Dutch family were staying in their motor home and their two dogs wandered over to say hello. The black retriever sidled up for a pat, followed by the little grey terrier, who put its paws up on my leg so I could scratch its belly and we all got acquainted in a most friendly fashion. The lady came over to get them, thinking they were bothering us, but I assured her I was very happy to say hello, so she stood by and laughed at the dogs’ enjoyment of the pats and scratches and ear rubs. I was happy! Some more animal company always adds a bonus to the day. Speaking of dogs, we have seen heaps of dogs being transported around on bikes, either in baskets or in little doggie trailers, being towed. People obviously like to take their dogs out with them, but I reckon the dogs would much prefer to walk and sniff and enjoy their stroll, than be chauffeured around on or behind a bike!

After a quick power walk into Westende proper, to find supplies, we cooked up our delicious Trangia supper and settled in for a chilly night.

It was a really nice ride today, only 50km, with a tail wind and nice paths. We saw some history, met friendly people, the sun shone and it was tops! We are nearing the end of our time in Belgium and days like this one, will see us leaving on a high. Thanks for the bonza day, Belgium. A ripper path, beaut weather and a cracking ride. No need to crack a walnut for today, it was a fun day. Forget the walnuts, it was a chocolate coated macadamia nut kind of day!