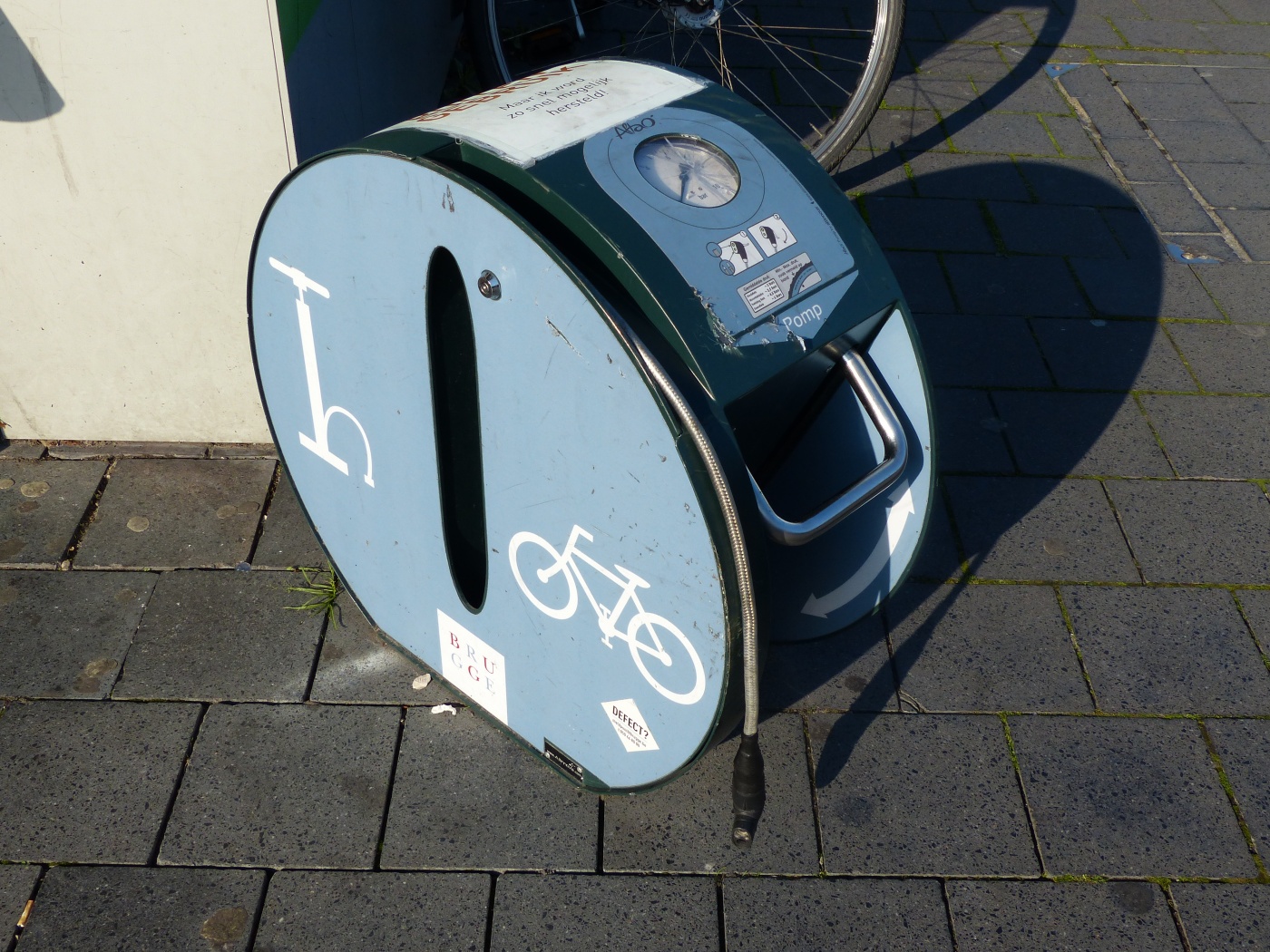 The charm of Brugge awaited, as we strolled out into the Belgian brightness, with the sun giving us a delightful, morning treat. Brugge had been described to us by various people as everything ranging from “beautiful” to “Disneyland” to “a must see” and “too touristic”, so we set off intending to form our own opinion and judge the city for ourselves. Armed with a map, some research of the highlights and some excellent information and suggestions from Pat, we walked towards the city centre.

It was certainly a busy city and most definitely teeming with tourists. I heard so many British and American voices and even the unmistakable nasal vowels of fellow touring Australians. The surroundings were lovely though and it was another city that, despite its size and swelling population of visitors, didn’t feel overwhelming or uncomfortably crowded.

We walked into Market Square, a central, open cobbled space, surrounded by cafes and the tall belfry of Saint Saviour’s Cathedral. 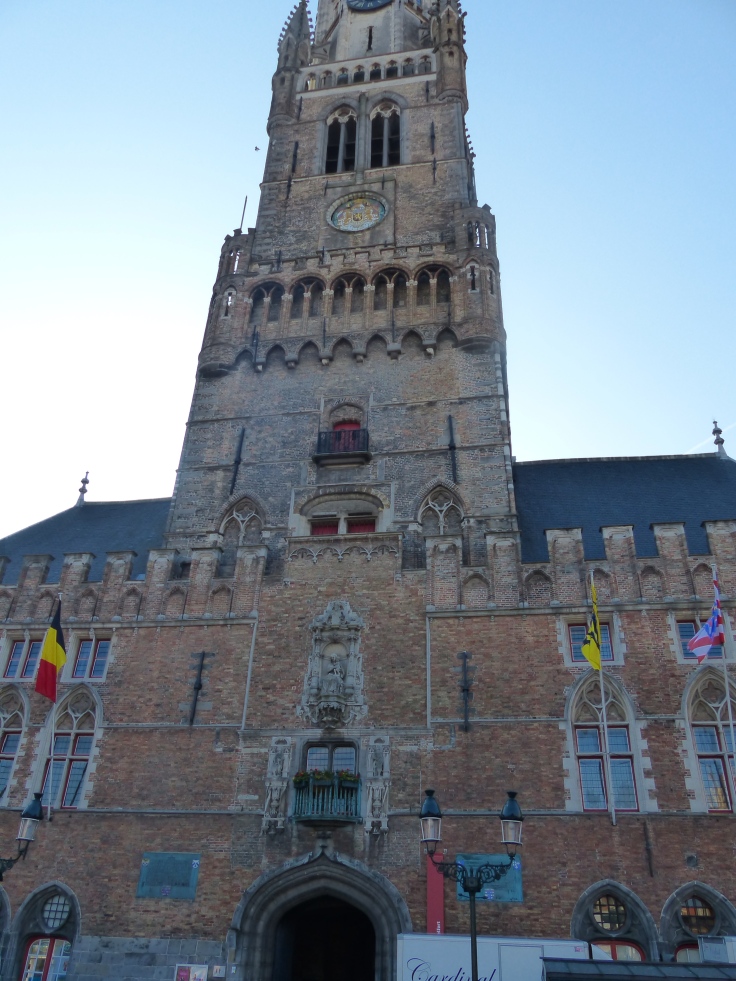 It so happened that there was indeed a market going on in Market Square. My eyes were immediately drawn to the array of colours on the produce stalls, so I set off to mingle  with the locals and try my best to be understood by the stallholders. I successfully located and purchased some strawberries and raspberries and then went off in search of blueberries. I cased the stalls, taking in the heavenly scene of every imaginable variety of fruit and veg and then spotted by prize at the end of a row.

I was standing and waiting to be served, when an elderly man stood beside me. I moved  aside to give him some room, but he said, “ something, something, something, something, No, no Madame,” and gestured with his hand for me to stand ahead of him, because I’d been waiting. When I heard him call me “Madame” I didn’t know whether to try and reply in French or Dutch, so I did a bit of both and smiled with a “Merci, dankjewel” which no doubt just made me sound like a linguistically confused and thoroughly incompetent communicator. He then began speaking to me in such a friendly and jovial way, laughing and smiling. I laughed and smiled along with him, having not a single clue as to what he was saying, but trying to join in nonetheless. He tried to get the stallholder’s attention to tell him I was waiting, but he was busy serving someone else. My friendly gentleman, then began speaking rapidly to me again, with some chuckles and some gestures at the stallholder as if to say something about us not being served yet and not having the stallholder’s attention. I laughed and tried to use a smile, a gesture and facial expressions to communicate something along the lines of “No worries, it doesn’t matter, I don’t mind waiting,”  and that nice gentleman had superb skills at interpreting the odd noises, gestures and apparent tics being exhibited by the strange, non-speaking short lady that he’d had the misfortune to stand next to. The stallholder eventually finished gathering the many bags of grapes, mushrooms and peaches requested by his customer and turned his attention in our direction. He looked to my friendly gentleman, as if to serve him, only to be given quite emphatic instructions to serve me instead, because I’d been waiting a while. The whole exchange and task only took a few minutes, but what fun! I couldn’t understand anything anyone was saying, but I’d just had one of the friendliest and chattiest encounters, without actually having to say anything! I just joined in with the joviality and after paying for my blueberries, I walked away with a huge grin on my face. I love that part of travelling! I bumble along, knocking on the communication barrier and sometimes breaking through, but mostly just bouncing off again. Still, I love getting in there, being with the locals and just doing the ordinary, everyday things they do, like market shopping. It also means I get to meet more friendly, delightful people, even if we can’t understand each other!

Having been to market, we roamed around the streets, beside the canal and just took in the beautiful buildings and historic surroundings.

We decided, since it was nearing elevenses, that we would go and sit somewhere, consult our map and set a course. We sat ourselves in a cafe and enjoyed some hearty, dense bread, liberally spread with jam, while we got our bearings.

We have roamed the streets and lanes of many towns and cities, but Brugge was inviting us to see its gorgeous grandeur from a different viewpoint. Let’s hop in a boat and take to the water! We joined the line of fellow tourists, waiting to cruise the city’s canals and we were again, surrounded by a variety of English speaking voices. Our craft pulled up in front of us, we boarded and found ourselves sitting beside three ladies from Canberra and Sydney! We cruised along the water, looking up and around at the beautiful buildings. Our guide was fantastic,  repeating everything  in English, Flemish and French. He even repeated the jokes. Every now and again he’d say something and a group of passengers would laugh, while the remainder looked a little befuddled and out of the loop, then he’d repeat it in another language and another group would laugh, before repeating it again and the remaining passengers caught up, laughed and everyone was now in the loop. It was like the Mexican wave of chuckles! 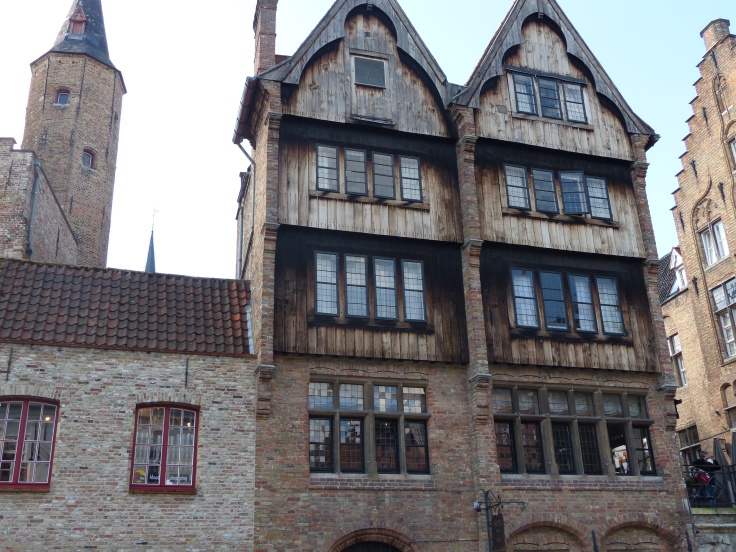 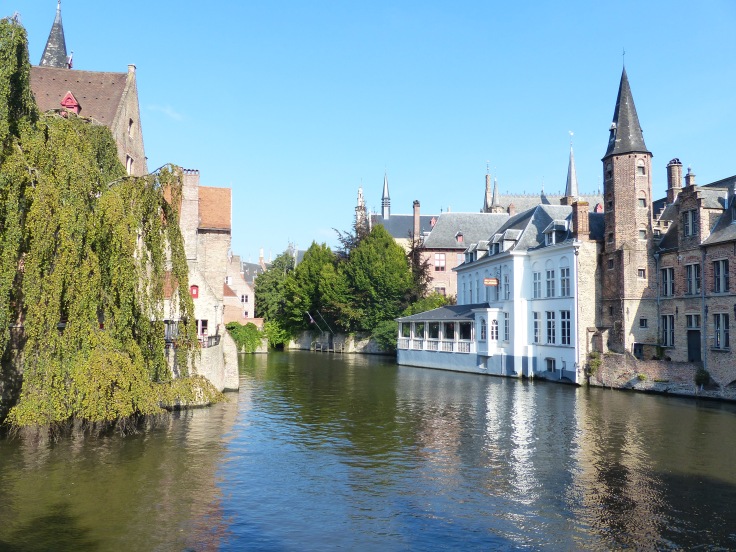 The cruise was a really nice way to see the city, ducking under the low bridges, seeing the centuries old, but still standing, architecture and feeling the history and stories in the stone and mortar surrounding us. 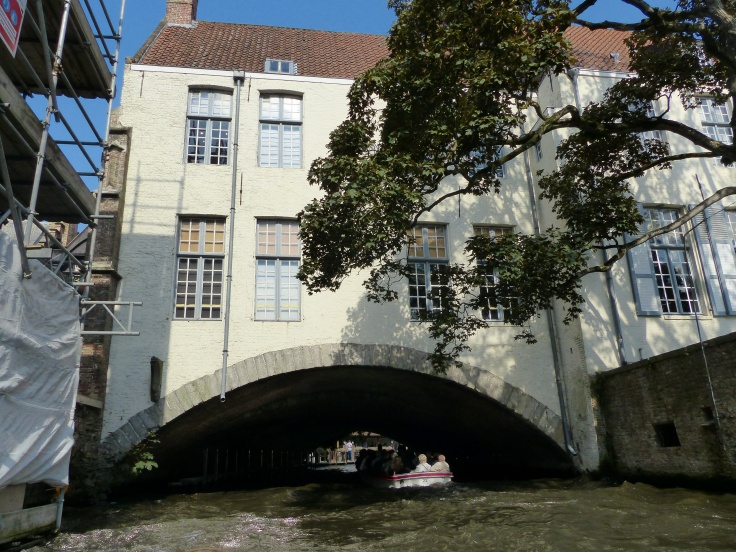 The rest of the day was spent simply roaming. We walked the streets, back lanes, through arches, across parks and along paths. Brugge is certainly a beautiful city. We paused for lunch, returning to Market Square to sit in the sunshine, where I happily worked my way through by market purchased berries and a small vegan muffin that I’d found in our chain elevenses cafe and Steve enjoyed the Belgian favourite of a bowl of frites (fries). 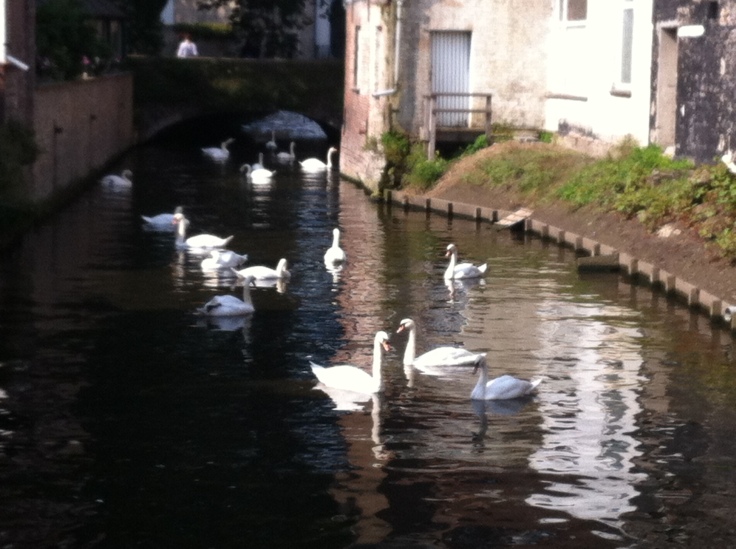 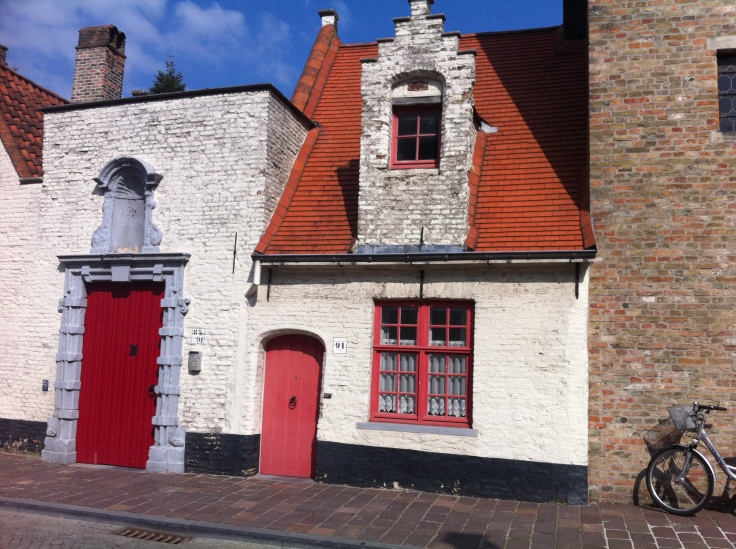 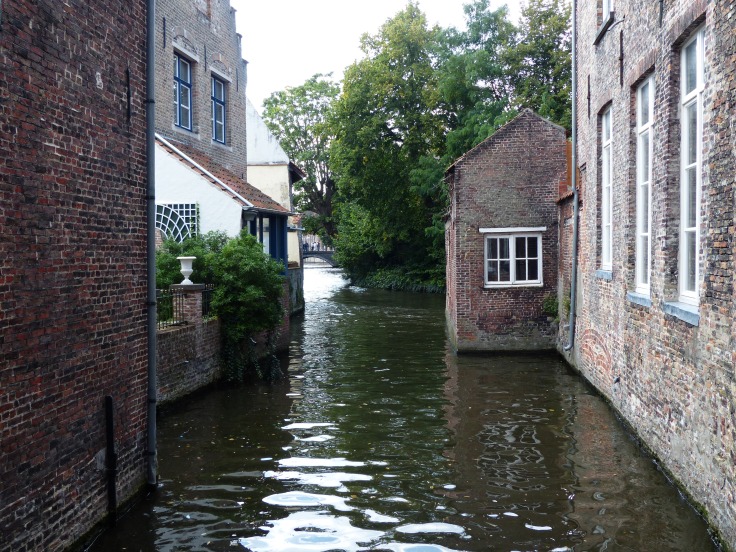 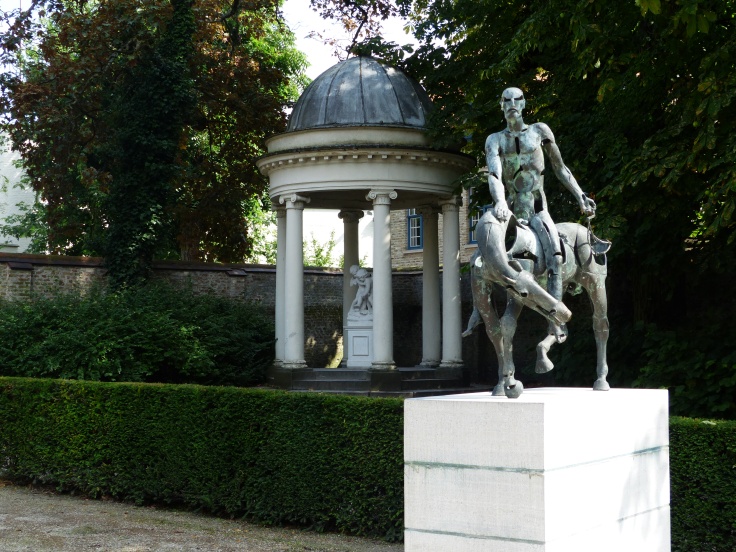 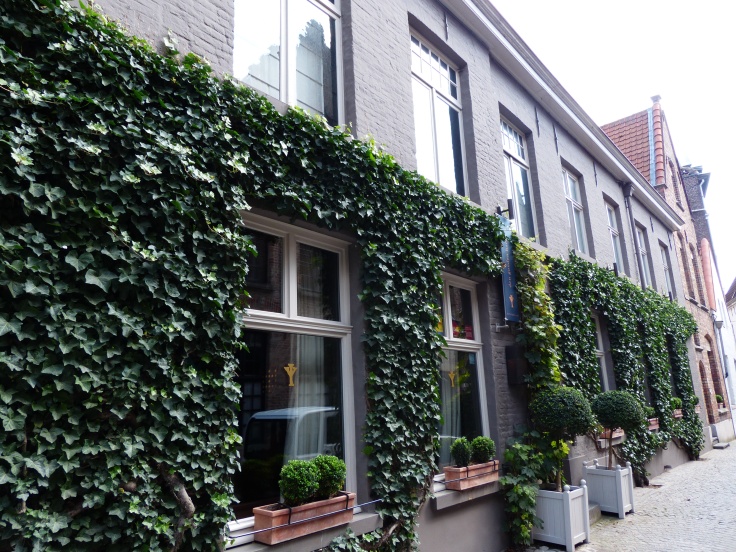 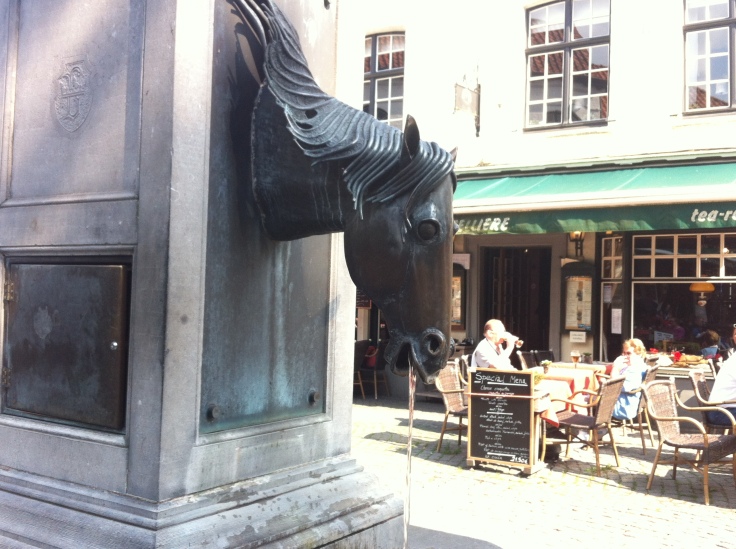 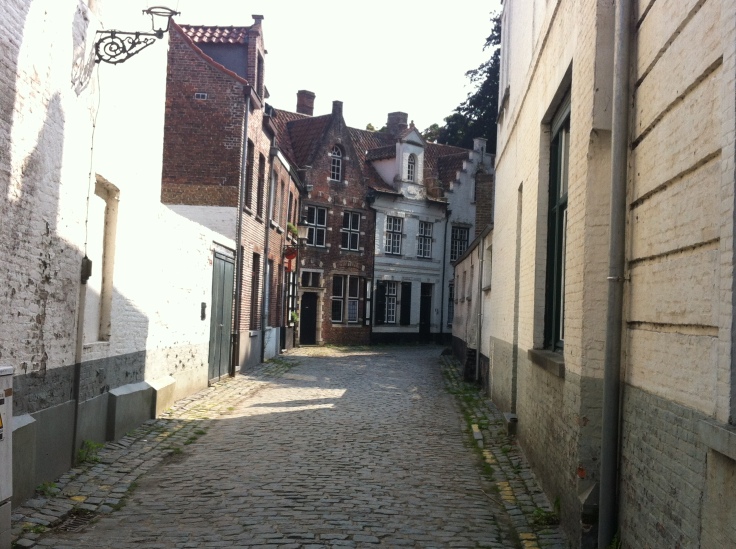 On our way back to our hotel, we passed through the Begijnhof Beguinage. This instantly became my favourite place in Brugge. It was founded in 1245 and is today, home to a community of nuns from the Order of St. Benedict. At the centre of this small, walled village, was a garden with towering trees, surrounded by the quaint, white walled cottages. This was like a haven of peace and tranquility in the heart of a very busy city. I could have happily sat there for ages, just letting the serenity surround me. It was a beautiful place and I loved spending some time there. 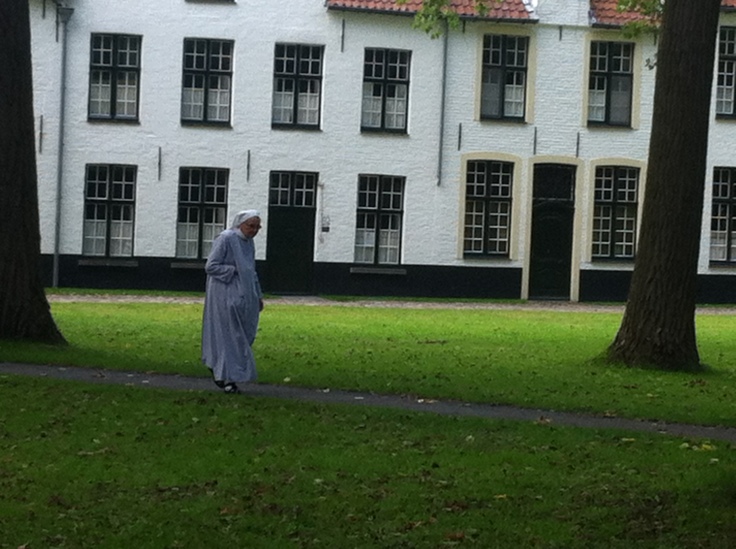 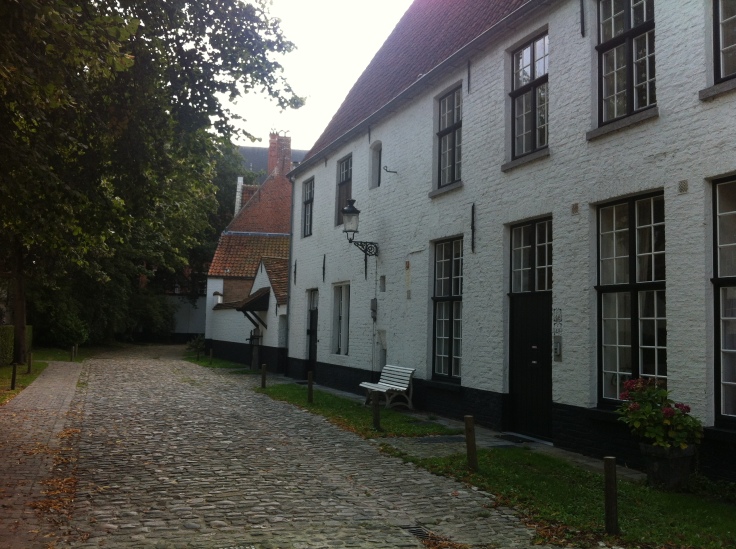 Time to head back to our room. We gathered some supplies along the way, then called in to do another check on the bikes, to make sure they were OK in their underground parking space. The bikes were fine, but unfortunately our other trusty companion was not OK, with the camera dying again today, mid-roam. Hopefully it will do another Lazarus routine and recover again by tomorrow.

The Tassie Tourers had another terrific day! A wonderful Wednesday of sunny strolling. Brugge was beautiful and showed us some lovely sights and gorgeous surroundings and we met some more friendly people. We’re moving on tomorrow to continue our exploration of the Flanders region and the stories it has to tell. We truly are loving every day and savouring every minute. We have a moan every now and again about the weather or some of the challenges that just come with using a self-powered mode of transport to get around the varied terrain, but the bottom line is, at the end of the day, when all’s said and done, without a shadow of a doubt…we are loving every minute of it! It’s a delight, it’s a dream, it’s a grand adventure and the places, moments, experiences and sights are also, simply grand. So much more to explore and discover…saddle up…power to the pedal!