The plan was to look out the window this morning and decide whether to ride on or not, after assessing the weather situation. The poor suffering weather broadcasters on breakfast TV were telling us about the warnings issued by the Met Office and the maps of England were a very pretty shade of bright blue, showing all the rain approaching the south east, right where we are.

The view from the window was grey and drizzly. The wind was blowing and the flags and trees were getting a workout. What to do? We could do what we’ve done in the past and set off in a mad race to outrun the approaching storm. We could ride on and see how far we got before the weather cracked up. We could stay and sit it out. After much procrastination, backwards and forwards positives and negatives of each option and probably overthinking everything way too much, we finally decided to stay and sit it out. Decision made.

Might as well get a bit more roaming under our belt then, so we set off in the direction of Chatham. We wandered the streets and along by the river, with the sky grey and the wind blowing, but the rain only light. 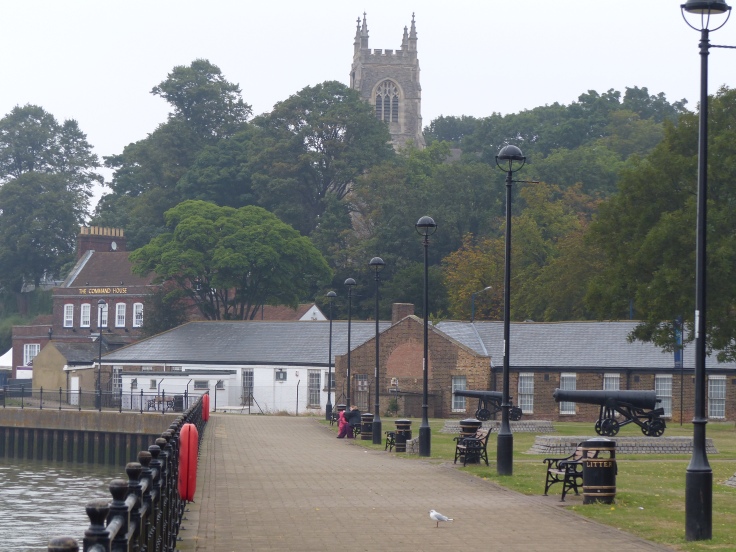 “Should we have ridden on?” I asked Steve.

“No,” he said, “it would be different out on the open road.”

The more we strolled, the more I worried that we’d wasted a day of riding, because the predicted atrocious weather didn’t seem to be arriving and knowing our luck, we’d sit it out today and the forecast would be a day behind and the storm would arrive tomorrow instead, right when we’re about to pedal off!

We toddled over to a tea room for a cuppa, where we sat by the window, with a nice view looking down on the river.  The tea room was in a gallery and it was lovely, with old furniture, rows of books lining the windowsills and artwork around the walls and room.

Then, just as I was draining the last drop from my tea pot, the room suddenly went quite dark, as a result of the sky outside the window going very dark. It suddenly went from daylight to dusk. The storm clouds crept in, they flung their black cloak around themselves like a theatrical villain and began to approach in a menacing fashion.

Just as we walked outside and headed for a stroll by the river, the heavens well and truly opened! It was unbelievable rain! It pounded down, flooded the roads and paths and sent townsfolk scurrying this way and that. I was feeling a bit better about our decision to stay, as we splashed in puddles, skipped and jumped over ever widening lakes on the path and took an absolute pounding from the powerful precipitation!

The rain wasn’t enough though. The thunder began and it rumbled and roared, the lightning flashed and dazzled like an 80’s disco strobe light and the children in the street cried and wailed at mother nature’s grand performance. The storm had well and truly arrived. We were glad we weren’t on the bikes and we were glad all our gear was tucked up in four solid walls, staying dry. It wouldn’t have been much fun at all to ride in, but it was fun walk around in! I just tried not to worry about the attraction our umbrellas might have presented to the lightning overhead, as we happily plodded and splashed around the wet and growing wetter, town.

We decided to cut our roaming short, due to the growing sogginess, so we squelched into Sainsbury’s, picked up supplies for the rest of the day and evening so we wouldn’t need to venture out again, then returned to the shelter of our room. The afternoon was spent taking it easy while the storm raged outside.

That was the day. Another non-riding day, but in the end probably a wise decision, given the light show and the clouds leaving the tap running. In fact, the news tonight was full of stories of the storm damage across the southeast, with homes on fire from lightning strikes, homes and businesses flooded and widespread storm damage, so it was a serious affair. More rain fell in nine hours, than usually falls in a month. So we have nothing to complain about, with our trifling weather inconveniences, when people have experienced events like that.

Hopefully the forecast was accurate, the storm was a one day fury and tomorrow will be fine for us to continue our pedalling progress.  Pedal on we shall, to see more wonderful things, collect more memorable experiences and meet some more special people and places. With that in mind, I’ll leave the final words to the man, in whose town we have been roaming, Charles Dickens.

“And a beautiful world we live in, when it is possible, and when many other such things are possible, and not only possible, but done– done, see you!– under that sky there, every day.”

2 thoughts on “Sitting Out the Storm”