As we rode towards the centre of Maidstone, the precipitation petered out and we just had clouds and wind upon wind. We blew into Maidstone and took a cycle path through Mote Park. What a lovely place. This is a huge park, with lovely gardens, tree lined paths and a lake. I’m sure it sparkles on a sunny day. I loved the swan shaped paddle boats on the lake. I thought they were only seen in Beano and Buster comics, but no, they’re the real deal. There was also a large manor house in the garden, which is now an exclusive retirement home. It would certainly we a picturesque and peaceful place to spend some retirement years.

We stopped in the centre of town and popped into Sainsbury’s to pick up elevenses. I power walked the aisles and there I spotted something familiar from home. Our muesli of choice at home is Carman’s and there on the shelf was a box of Carman’s muesli bars. Fancy spotting Australian muesli bars in Sainsbury’s, it was as good as finding Vegemite in Tesco. I searched the cereal shelves, trying to find boxes of the muesli because I knew Steve would be stoked. It’s taken us months to find a worthy substitute for his breakfast muesli, so if I were to emerge holding a box of Carman’s, he’d be over the moon. No such luck though, just the muesli bars. When I presented them to him though, he was a happy Tassie! “What a find!” he said.

Off we went, through the streets of Maidstone and then onto a cycle lane, following Route 177 of the National Cycle Network. We huffed up some hills and were battling the wind OK, as we reached the outskirts of the city. Then something happened. I got hit by a car for the first time ever on a bike. I was in the cycle lane to take me through a roundabout and Steve had gone through ahead of me. There were no cars in the roundabout, it was clear for me to go and I had right of way, but then a car came straight through the roundabout, didn’t give way and ran into me. In the split second I saw it before it made contact and I realised it was going to hit me, I quickly tried to turn my wheels to get myself as parallel to it as I could, to avoid it hitting me fully side on. That split second turn of my front wheel must have helped because the car hit the front of the bike and knocked my front pannier off and sent it sprawling down the road, but I had managed to dodge being hit completely. There was a man walking down the footpath beside the road, who saw it happen and asked if I was OK.

“What the f!#@ did that guy think he was doing!? Are you alright?” he called out to me.

I scrambled to hold the bike while I went to pick up the pannier and I’d started to get off the road when Steve was on his way back to see what happened.

“What happened?” he asked.

“Where did you get hit?”

“Just there on the road.”

“I meant where on you and the bike. Are you OK?”

Oh, I hadn’t thought of that. I hadn’t actually thought about me.

So that was the incident for the day, but I managed to dodge anything too bad happening. Oh, and the driver didn’t stop to check if I was OK. The car just continued on down the road. We’ve had quite a few people ask how we’ve gone in the traffic, since we’ve been in England and they’ve told us of their near misses or broken bones, from their encounters with dangerous driving. We haven’t had any problems at all, apart from Steve nearly getting hit when a driver tried to overtake him on the inside when he turned at an intersection in Southhampton and now today’s event. It was a one off. A driver who didn’t look or wasn’t paying attention, or something. All was OK in the end though, and we rode on and I pedalled up the hill that presented itself to me straight away!

On we went and that darn wind was determined to make the day a less than enjoyable one. It was getting cold. Then, just to make things even better, we found ourselves on a goat track again. It was rocky and had really thick gravel, so the wheels just spun and got bogged in the rocks. The pedalling was hard going, the track was steep and despite being a cycle route, the conditions were not bike friendly at all. We made it to the top of the track and Steve consulted the map. It was at this point the expletive issued forth from his tongue! We had somehow gone off route and hadn’t needed to go up that track at all, even though the route marker had pointed us there. Clearly, Steve wasn’t feeling the love for the ride today either!

“I think we ride to Rochester and find somewhere warm to stay and stop for the day.”

We needed a hotel for electricity for all our flat technology and the Met Office had issued a “Yellow Level Warning” for storms and heavy rain, up to 50mm in a 6-12 hour period in our part of the country, so it made sense to seek shelter and solid walls. The riding conditions didn’t make the thought of a long ride particularly enticing, so we decided on that plan. Forward to Rochester.

Some more hills, some more traffic and lots more wind, we rode into Rochester and found its historic High Street. We walked the bikes through and found a tea room to sit for a cuppa while we searched for somewhere to stay. There wasn’t much on offer.

I was actually pleased he said that, because I was back to shivering from top to bottom and inside out, I was that cold in the horrible wind. We eventually found a hotel close by and when we arrived, the young man on reception was very helpful and found us the perfect spot in a lock-up room in the underground car park for the bikes.

We carted all our gear up the narrow stairs (elevator out of order!) and practically fell into our room.  The ride was done after only 24km, but they were a tough 24km, with rain, wind, hills, a traffic incident and a goat track, so I tried not to feel guilty again for only doing a short ride. “It’s a bit pathetic,” I said to Steve, “only 24km.” (I really do worry when we don’t do a decent distance. But then, worrying is what I do best!)

“It IS NOT pathetic!” he replied quite emphatically, “it was a tough ride.”

We had a quick lunch in the room, then set off for a roam through Rochester. I walked out in a thermal and two fleece jackets as my summer wardrobe. That was probably more a portrait of me as a wimpy, sooky la-la that it was of the weather, because there were people walking around in t-shirts, but I’d been utterly freezing today and I hadn’t warmed up, so I was going to stay toasty! We walked down the High Street again and what a charming place. So full of history and gorgeous buildings.

We discovered we were in Charles Dickens territory and he had spent many years here. Many of the buildings here were inspirations for settings for his novels and some were specifically mentioned in his stories too.

We went into the Six Poor Travellers House, which is now a museum, but was originally an alms house for penniless travellers. Charles Dickens actually wrote a story about it and what we saw inside, was actually described by Dickens in the story. Here are some excerpts from his story The Seven Poor Travellers and some of what we saw, that is still there today, in the same building that inspired Dickens’ writing.

Strictly speaking, there were only six Poor Travellers; but, being a Traveller myself, though an idle one, and being withal as poor as I hope to be, I brought the number up to seven.  This word of explanation is due at once, for what says the inscription over the quaint old door?

who not being ROGUES, or PROCTORS,

May receive gratis for one Night, 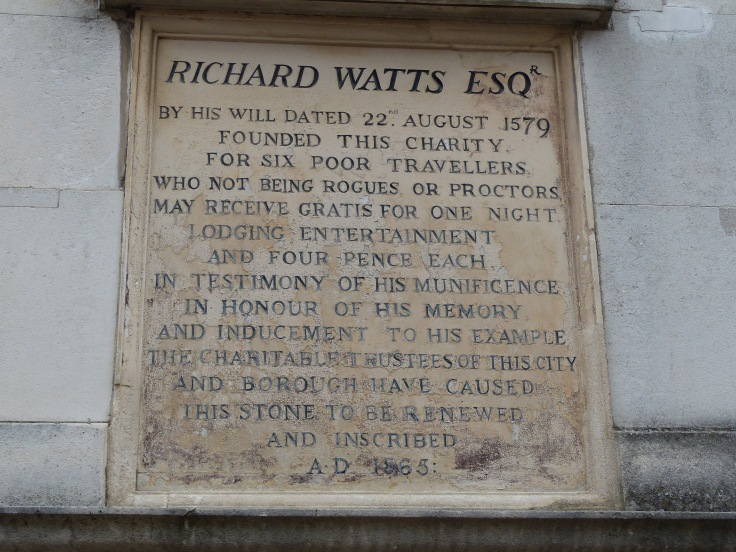 I found it to be a clean white house, of a staid and venerable air, with the quaint old door already three times mentioned (an arched door), choice little long low lattice-windows, and a roof of three gables.

I espied, at one of the upper lattices which stood open, a decent body, of a wholesome matronly appearance, whose eyes I caught inquiringly addressed to mine.  They said so plainly, “Do you wish to see the house?” that I answered aloud, “Yes, if you please.”  And within a minute the old door opened, and I bent my head, and went down two steps into the entry. 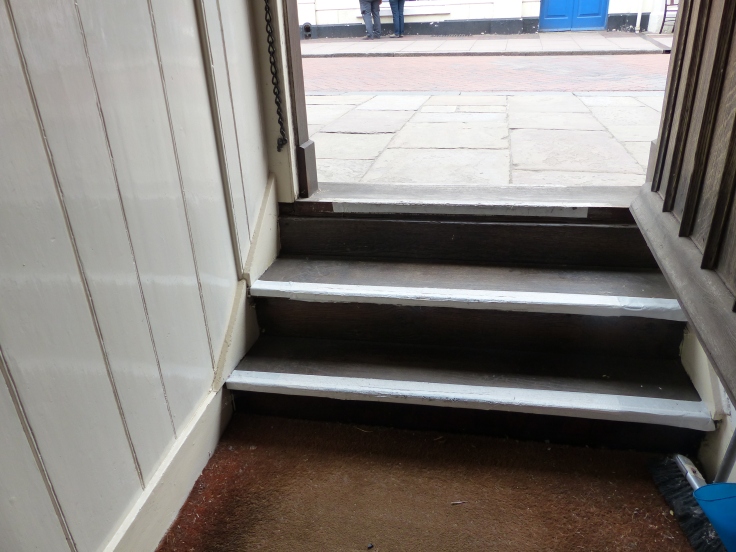 I had been looking about the room, admiring its snug fireside at the upper end, its glimpse of the street through the low mullioned window, and its beams overhead.  “It is very comfortable,”said I. 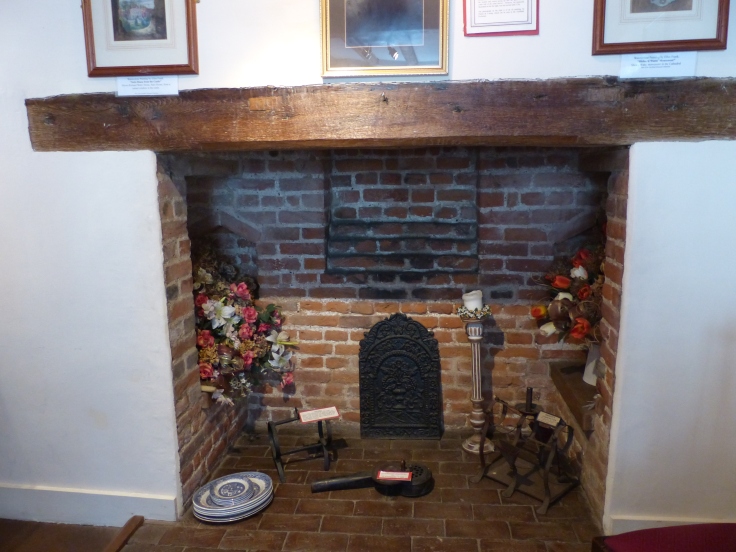 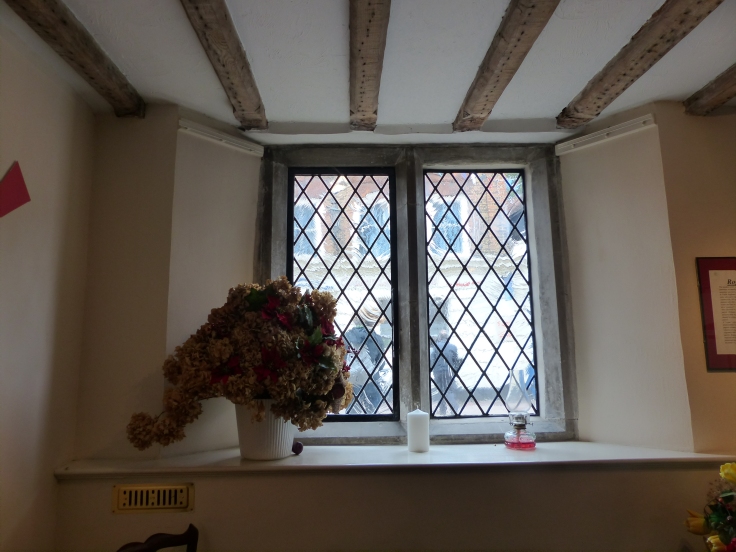 My new friend shook her head.  “They sleep,” she answered, “in two little outer galleries at the back, where their beds has always been, ever since the Charity was founded. 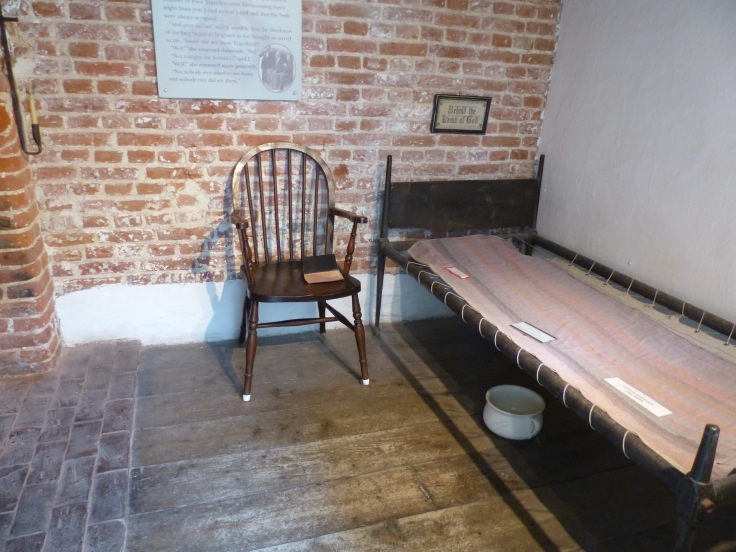 It being so very ill-conwenient to me as things is at present, the gentlemen are going to take off a bit of the back-yard, and make a slip of a room for ’em there, to sit in before they go to bed.”

I love that there are buildings like this one, that have been so well preserved and offered to the public as a free museum. Just wonderful. We roamed and strolled the High Street and found many more buildings which found themselves included in Dickens’ works.

We turned off the High Street and strolled down a passageway, where we came across the remains of the city walls, from Roman times. They sure did get around, those Romans and were very fond of walls! 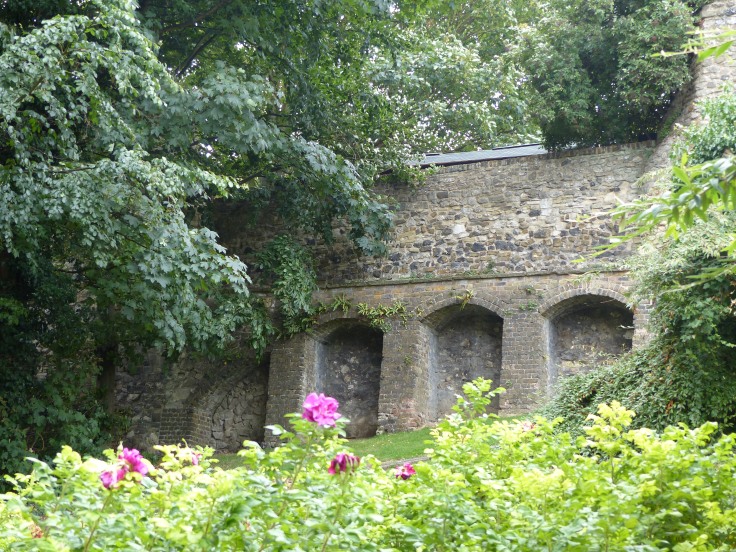 Around a corner and down a street and we strolled towards Rochester Cathedral, the second oldest cathedral in England, dating from 604AD. It was another beautiful building and we quietly wandered its aisles and nooks. 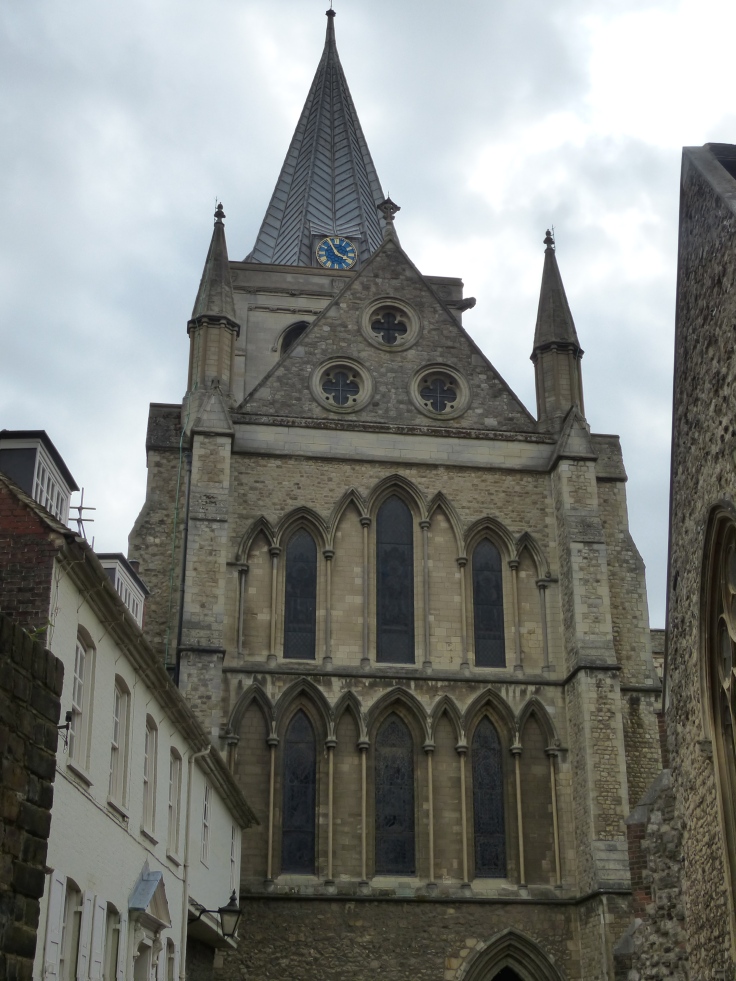 Across the road from the cathedral was Rochester Castle, so we walked up the hill to have a look at the remains of this imposing structure. It now sits within a large park and it was again quite special, to reflect on the age of the things we see or touch. It’s so hard to process and comprehend, the age of these buildings. 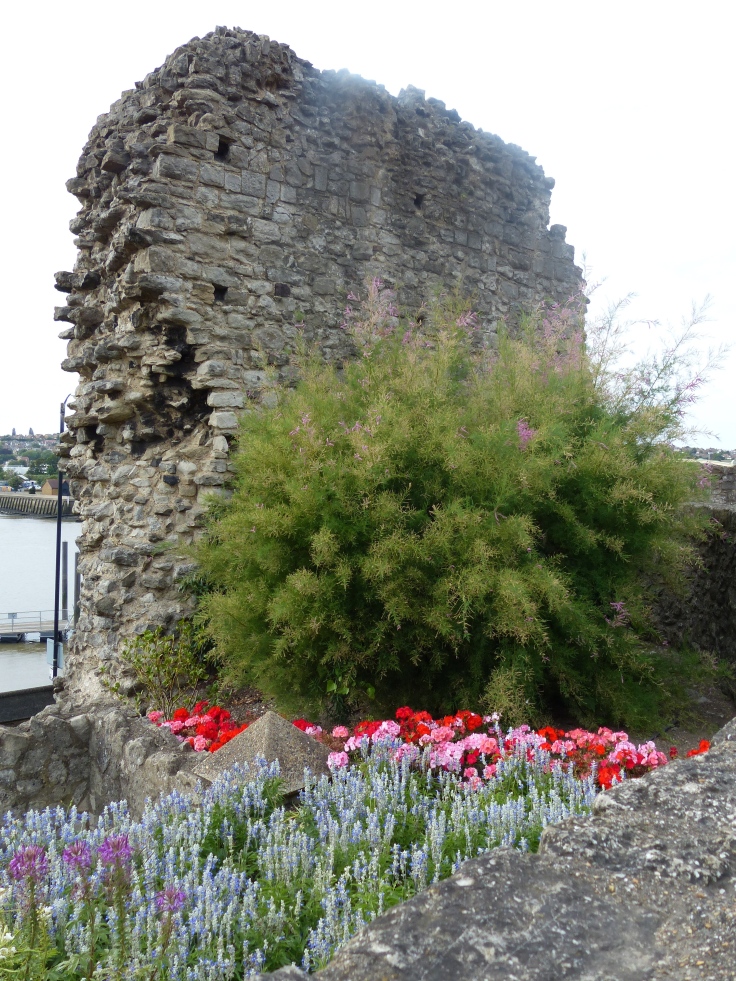 Our roaming then took us back to our hotel and that was that.

It was a mixed sort of day. Some weather challenges. Some riding challenges. Some traffic challenges. Then, a super interesting and really enjoyable end to the day, strolling along some beautiful, historic streets and areas in Rochester and learning some more fabulous facts and stories. A grand end to the day. We’re not sure what will happen with our forward progress over the next few days, given these pesky weather warnings. The forecast seems to change hourly at the moment though, so we’ll ride when we can, for as long as we can and seek shelter if we have to, if things get a bit hairy. This is the plan…

6 thoughts on “Damp, Dodging and Dickens”