Cheers London, see you later, farewell and t’ra…we’re off.

Time to reacquaint ourselves with our loaded, weighty bikes and get the legs and lungs back into action. Leaving the hotel and getting back on the bikes, also meant it was time to navigate those scary city streets again. Oh well, it had to be done, no other way to leave but to leave through the torrent of traffic.

Whizz…race…dodge…Wait! Don’t try and pass me, there’s not room!…pedal…swerve…Don’t pull out yet, I’m coming, can you see me!…turn…roundabout…zip…Ooh, please move over a bit, just move over a bit, I’m a bit squished against the curb here!…indicate…turn…balance…race…brake…

On we went, through the back streets, seeking some quieter riding conditions, then back into the rapids of traffic again. The map had shown us that we would have an off-road cycle path and sure enough, we were eventually amongst trees and parkland and forest and riding along a lovely, quiet woodland trail.

“Are you enjoying the detour?” called Steve.

“Is this a detour or the route?” I asked.

“I’ve lost the route, this is a detour, but we should come out in the same place,” came the reply.

“I thought this must be the off-road section of the route,” I said.

“No, we haven’t even reached that bit yet.”

Oh. Oh well, it was a very pleasant detour because the path was so nice, and it was a welcome reprieve from the traffic.

We came out in some quiet suburban streets, amongst some very swanky looking houses with lots of Audis, Mercs and Porche 4WD’s along the streets. I looked for a sign to try and see where we were and spotted one that said we were in West Wimbledon. Steve stopped ahead of me.

“I have no idea where we are,” he said. Hmmm, I thought we were past doing this!

“We’re in Wimbledon,” I said, “we seem to have gone an awfully long way, just to end up in Wimbledon.”

“Yes, we have,” agreed Steve, “but I think we’re heading in the right direction.” Hmmmm. Wimbledon was only a 10 minute bus ride from our hotel and we’ve been riding for nearly an hour and here we are, 10 minutes down the road from where we started! Then, I saw  sign pointing to the area where our hotel was! I think we’ve been riding in a circle!

Some more cycling in “possibly the right direction” and a good ol’ ASDA supermarket appeared, so we stopped to pick up some elevenses and discovered we were now in Kingston. We walked through the town centre, which was bustling and as we approached the river, we saw a route marker. “There it is! The Thames Cycle Path! That’s where we’re supposed to be!” So just like that, with some navigation, recalculating and maybe a little bit by accident, we were back on track!

We stopped beside the river for elevenses and the sun came out briefly, which was wonderful. We both said we’d been feeling cold as we were riding, because it was chilly and really windy. “It feels like winter!” Steve remarked. I added another layer during elevenses. We watched the rowers going past along the river and had a pleasant little sit.

Off we went and we had a fantastic path beside the river…picturesque, flat and quiet. Ripper! The areas we rode through were lovely and I shudder to think what the property prices would be! The houses along the river were gorgeous, with complete river frontage and some with their own small moorings out front. We pedalled along, looking at the river and the houses, passing locks and saying hello to passing walkers and cyclists. It was lovely. We also rode past Hampton Court which, of course, looked very grand and beautiful. 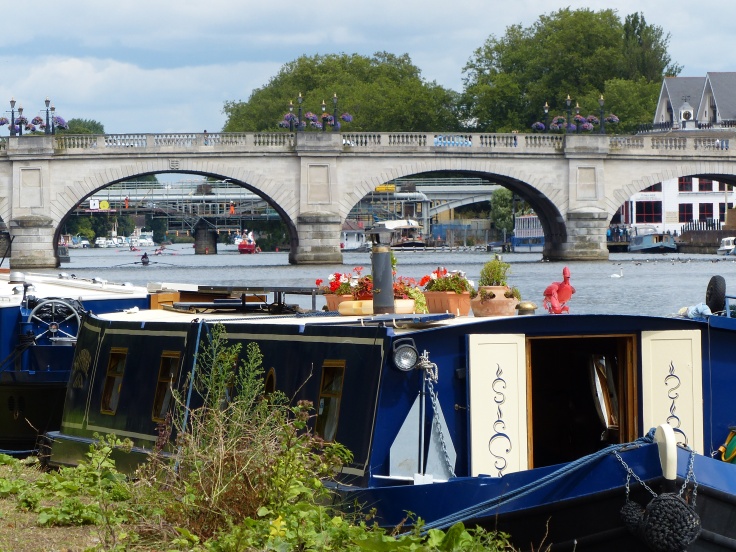 We rode into Walton-on-Thames, which was another very nice area and stopped for lunch in a park near the river.

It was all really nice, except it was cold. Steve added another layer, so now he was in four layers, including long sleeves and a jacket and I was in a thermal and two windbreaker and soft shell vests. It was still cold though. We checked on the campsite situation and found one that wasn’t too far away, so decided to opt for that one, even if it meant a shorter ride today. I actually secretly thought Steve wanted to do a shorter ride because the cricket started today, so I reckon he just wanted to finish so he could sit and listen to that. Still, a shorter ride would be OK as we got back into the swing of things and on a chilly day. 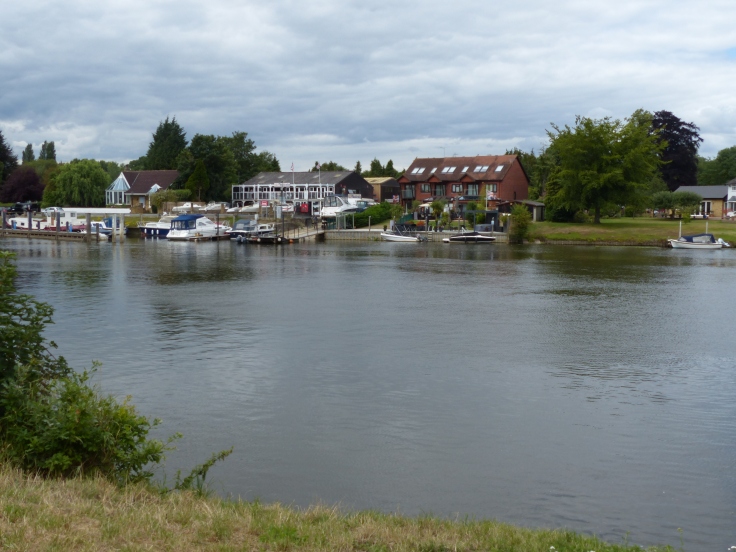 We left our nice quiet path and were back on the road again. I think we were still travelling through some pretty upmarket areas, because I heard a revving car behind me, the sort of sound that says it’s obviously in an impatient hurry to get past the annoying cyclist in front of it. It eventually swerved around me and as it went past, I saw the telltale rearing horse logo on the back of it. OK, so we’re in that sort of neighbourhood! I saw it pull in behind Steve and it was obviously itching to get past. Then… BBRRRAAAAHHHH… BBRRRAAAAHHHH… BBRRRAAAAHHHH…The driver hit some sort of super dooper accelerator and it roared past Steve and took off. Or maybe that’s what they always sound like. I wouldn’t know! I caught up with Steve and said, “Did you like being passed by the Ferrari?”

I thought it was a Ferrari driver with attitude. You were passing a cyclist mate. A cyclist loaded up with panniers. We weren’t much competition. I don’t think you really needed to do the turbo-charged revving and roaring, just to overtake a slow moving, two-wheeled, pedal powered fellow road user. So you drive a Ferrari. Big deal. Well mate, when I’m not cycling the roads and paths of Europe, I drive a Renault, with custom added dog hair on the seats and paw prints on the windows and real, not fake stencilled, but REAL mud splatters on the side of it! How do you like that!? How impressive am I??!!

After a mere 36km we rode into Chertsey, where we found our campsite and pitched the tent on a little patch of grass beside a creek. I immediately pulled out my thickest fleece jacket and added that to the layers, then we fired up the Trangia for a warming beverage. After a stroll into the town to pick up some supplies, we have settled in, waiting for the forecast “very cold night” that the weather presenter warned of. It has also started raining. I think I might need another layer and some warm socks and maybe a beanie. Summer!

Oh, and have a look at this map from the Met Office. We are about 20km north of Guildford and will be heading in that general direction. Take a look at the weather icons. The only place with a black cloud and raindrops is the place we’re heading! Need I say more! 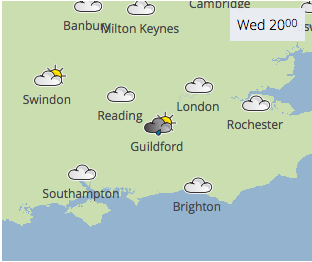 So here we sit, after a hearty Trangia supper, in the tent, in our multiple layers, woolly socks and jackets, in the rain, thinking about our onward journey. We’ll go where the cycle route takes us, we’ve trusted those route markers so far, so we’ll just keep following the numbers and take what comes. Hills, rain, wind, cold, we’ll take what comes! There might be hills, but they’re ENGLISH hills! It’s ENGLISH rain and ENGLISH wind! That’s new and different isn’t it!? That’s part of experiencing new things isn’t it!? There’s always a positive spin folks, it’s always there somewhere!

2 thoughts on “Leaving London and Losing Our Way”