“Aaah, that’s more like it, this is more our pace,” were our words as we arrived in Greenwich and began walking through its quiet streets and parks.

We decided to limit our time spent on a train today and explore one location, so Greenwich was our destination for the day. En route, we stopped at Canary Wharf for a look around. From the moment we emerged from the tube station, it was pretty clear this area beside the Thames was floating on money. It was like the Manhattan of London, with the big financial institutions, high end shops and a larger than usual police presence. In fact there were more police in a few metres here, than we have seen in all our roaming around London as a whole. After a stroll around, we went in search of some elevenses in one of the shopping centres, Canada Place. I think we definitely looked like a couple of turkeys at a peacock party. This was not our environment! Everything had that sense of “upper” about it and the way I feel, with how we are travelling at the moment, I definitely feel “lower”! The two daggy ol’ cycle campers were surrounded by swank and swagger. We eventually found a cafe that gave us some elevenses, ready for our onward journey and we took to the train once more.

Arriving in Greenwich brought with it an immediate sense of calm. It was like a little town in its own right on the outskirts of London. The streets were quieter, the buildings were grand and old and historic and beautiful and the space was open. This was our kind of place. We strolled over to a building that gave us a small sense of home – Devonport House, which was originally a hospital.

We had a lovely stroll  through the park and up to the observatory, admiring the beautiful old buildings. There was a great view from the top, across to the city skyline, although the contrast between the old, historic buildings in the foreground and the modern London high-rises behind, was quite striking. The modern buildings looked a little like a blot on the landscape in comparison to the grand old buildings of Greenwich.

Greenwich is, of course, home to time. We stood on the meridian line, from which all time is measured and checked watches against the Greenwich clock. At first I thought the time was wrong. I looked at  the clock and thought, “Why is it showing quarter past six? That’s not right! Fancy a Greenwich clock being that wrong!” When I got my act together and had a better look, it was obviously a 24hr clock, which I thought was really interesting.  The time on the clock was also an hour slow, because it’s always set to Greenwich mean time, rather than British summer time, which is an hour ahead at the moment. I stood and looked at that clock for quite a while, quite fascinated!

A stroll down the hill took us to the Cutty Sark, a clipper ship that was built in 1869 and sailed around the world as a trading vessel.

After roaming around the pleasant streets and parks of Greenwich, we were looking for a break from the chilly wind, so went in search of a place for lunch. We passed a sign outside one eatery, but unfortunately didn’t qualify, because while we had found some green grass, we were struggling in our search for blue sky! 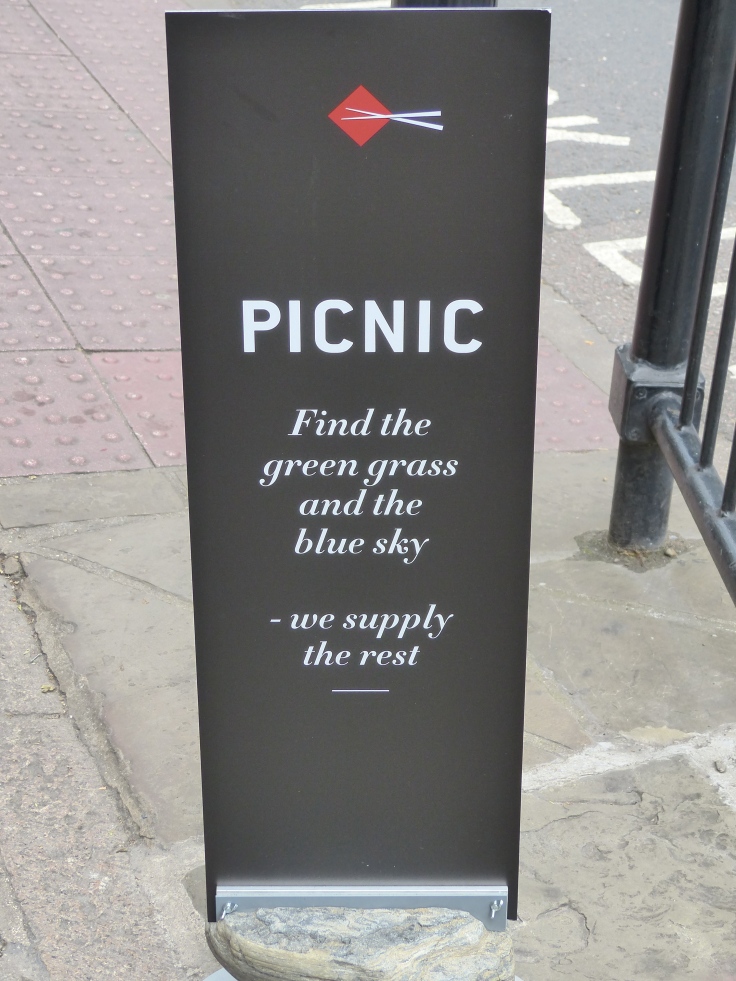 We did manage to find a lovely little cafe though, with a very nice, friendly girl serving, who happily checked on the ingredient status of the vegetable chilli for me. Steve tucked into an enormous Angus burger and chips, while I had an extremely tasty vegetable chilli and jacket potato. Often when we’ve eaten at pubs, they will offer three bean chilli as a veg option, and each time I’ve eaten it,  it just appears to be an opened can of Heinz, which is fine I guess because it tastes OK. Today’s chilli though, was the real deal, full of veggies and obviously cooked from scratch. So we both enjoyed our tasty lunch out of the windy, chilly weather.

We arrived in Greenwich by rail, but left by river. We decided to take the river boat down the Thames to Westminster, so we had a very nice, slow chug along the river, looking at the sights from a new vantage point.

We disembarked at Westminster and it was straight back into the attack on the senses, with all the noise and people and hustle and bustle that comes with the centre of London. Last stop was a small museum beside Horse Guards Parade, which focused on the Household Cavalry. What was great about this museum, was it included part of the working stables. As well as the museum, with the various exhibits, there was a window through to the stable area, where we could see a couple of horses in their stalls and some members of the regiment coming and going. When I looked at the horse, I thought it’s not much of a life. I hope they get to spend some time in a paddock occasionally and get to run around and roll and graze and do all the things horses are supposed to do. I don’t like it when horses have to spend their days cooped up in a stall or stable, just standing around, which is so unnatural.

The horses have to be a minimum of 16.2 hands high (that’s about 167cm from the ground to their wither, which is the bump at the base of their neck). I stood beside a model of one of the horses, and while I have ridden horses that big before, it’s been a while and I reckon these days I’d need some new acrobatic lessons to get on! It was a small but interesting little museum and it capped off a pleasant and easy paced day quite nicely.

We have one more day in London before we again take to the pedals. We’ve learnt a lot, seen a lot and roamed and explored and discovered. There’s so much to do and so much to see, that there are many more things we would like to have done, but just won’t have the time. Maybe that means there will have to be another touring adventure sometime in the future to fill in all our gaps!? For now though, we will add a few more experiences to our collection on our final day. We shall wander and wonder, plod and peruse, roam and regard and stroll and survey as we enter the final stages of our exploration of London. Places to see, people to meet, discoveries to make. Fire up the feet, we’re off!