Ira? Who’s Ira? Have we picked up an additional travelling companion? Well, I’ve decided that since my blue raincoat makes such a regular appearance in this blog, it’s starting to develop a character all its own. With this in mind, I felt it deserved its own identity. Today, I bestowed upon the blue raincoat, the name Ira. No, it is not named in homage to Ira Glass or other notable people of the same name. It is, of course, an acronym for It’s Raining Again! Today it rained…and rained…and rained. It became The Day of Ira, as we roamed together around the sodden streets of London.

Off Steve and I squelched, into the city to have a further look around and to visit some indoor locations. With a splash and a splosh, we arrived at St. Paul’s Cathedral and walked through the gardens, admiring this magnificent building with so much history and so many stories to tell.

We thought we would also take a look inside, but when we entered we were greeted with this sign… 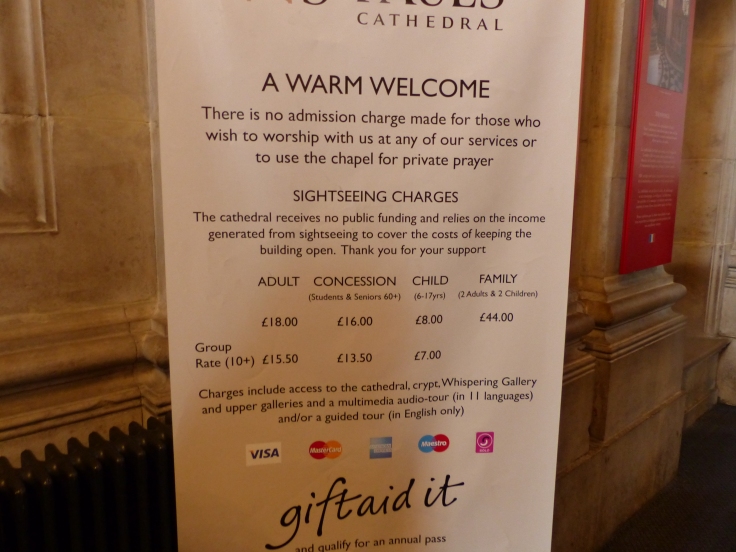 …umm, no thank you. We decided not to spend the equivalent of more than $70.00 to walk around inside. That’s a bit cheeky, asking £18.00 each we thought! We’ve been inside many beautiful cathedrals that ask not a penny or a pinch for the privilege, so we decided we didn’t need to see the inners of St. Paul’s quite that much.

Today was a good day for museums we decided, so back to the Underground we went, to speedily rock and roll our way out to the Victoria and Albert Museum. We ascended the steps up to the street, to be greeted with yet more precipitation, so we set off with a squish, squelch and splash to walk down the street to the museum. Unfortunately, when we arrived, it was to discover that many other tourists like ourselves, had obviously had the same brainwave as us.The line to get in was at least 100m long, and with the weather being as unforgivingly wet as it was, we decided to pass on standing for an hour in the rain, in order to get inside. Yet another indoor activity thwarted!

Ok, onto another plan. We were a short walk from Harrods, so let’s go and lower the tone of the place by squelching through the front door in our daggy, cycling campers’ wet weather finest! With some more soggy squelching and athletic side stepping and dodging of ever widening and lengthening puddles, we arrived on the hallowed ground of this iconic department store.

We wandered through to the Food Hall. It was lunch time, so I thought I’d find some bread to take with us. I did manage to find some rye rolls and some olive bread that didn’t completely cause my wallet to self destruct, so we were set for lunch. While we were there, I wondered what Harrods’ toilets would be like? Surely if there was a loo worth visiting, it would have to be a Harrods facility! We followed the signs down to the “Luxury Washroom” and I stood in the inevitable line for the ladies’ lav. When I finally reached the head of the line and could see into the bathroom, I could see the reason for the slight hold up in entering. There were only three stalls and a single lady was cleaning each one after its occupant departed. She was slowly and meticulously following her routine after each person…spray bottle…squirt…squirt…walk slowly to cloths…wipe…wipe…walk slowly to broom…sweep…sweep… This was done at a very leisurely pace, but all the time she was doing this, she was quietly singing to herself. It sounded lovely. When it was my turn to enter, she was busily cleaning one of the stalls, when a girl vacated another, so I swiftly sprinted into that one, rather than waiting for the cleaning routine. When I emerged and was washing my hands, I turned to the cleaner and said, “You have a beautiful singing voice.”

Well, she smiled and put her hand to her chest. “Thank you, thank you.”

“It makes standing in line worth it, just to listen to you,” I added.

“Thank you so much, I get very tired you see, so singing helps.”

“Thank you, that is so kind, thank you,” she added and beamed such a beautiful smile.

I always try and chat to people like her, who have tough and often thankless and tedious jobs, but she was definitely worth chatting to and her singing was a delightful bonus for a visit to the bathroom! In fact, I had a brief chat to a cleaner in another toilet yesterday! I’d called into the public facilities on South Bank and the cleaner was standing against the wall and wasn’t looking too thrilled to be there, which is understandable. As I was leaving, I went up to her and said, “It’s so nice to walk into a toilet that looks and smells clean, so thank you for doing what you do.”

She smiled and then nodded to the door. “It won’t be for much longer, the men have arrived.” Then she laughed, so I laughed with her! A tough job, but still a sense of humour!

All in all, from our visit to Harrods, I must conclude that this establishment is nothing special. When I eventually ate the bread, it was nothing marvellous and certainly no better than Tesco’s.  The goods on offer were nothing out of this world splendid and were certainly not worth the £48.00 per kilo for strawberries or the jar of Manuka honey for £55.00. It wasn’t special enough to deserve paying over ten times more than Sainsbury’s! So Harrods is a very famous place with a very famous name, but there’s nothing brill about its offerings and it’s bathroom wasn’t even special and posh either. I’ve been in better. All it had going for it today, I decided, was a very pleasant and talented cleaner and I’m glad I got to meet her!

With the weather being as unkind as it was, we were having difficulty finding anywhere out of the downpour to sit and eat lunch. Finally we decided to just get back on the tube and ride back to St Pancras station and sit there, while having a look at the building. When we arrived, it was of course, teeming with people, but we eventually found a seat upstairs, so sat and ate our rolls, while we dried off a bit.

I had wanted to visit the Imperial War Museum, so we set off to go there, deciding to travel overground for a change. We caught the bus and watched the soaked and thoroughly drenched city, go past the window.

After getting off the bus, we continued our dance routine of side-stepping, lunging and leaping over and around puddles and we splooshed our way up to the museum.

We spent a few hours wandering the exhibits, reading the information and immersing ourselves in some more history. It’s always interesting to see these sorts of museums in different places and different countries to see the different ways the same information is presented from different perspectives and how it has been displayed. We wandered through World War I and again took in the magnitude of this conflict. I found some of the signs that were erected on the front lines both interesting and telling. 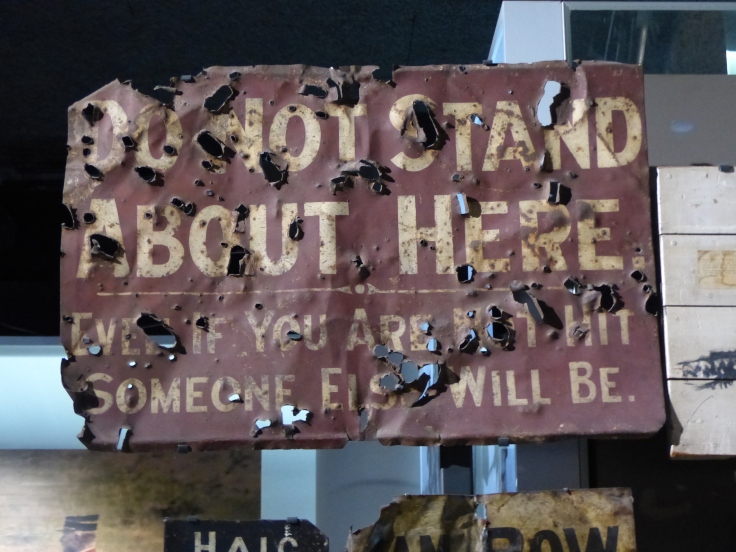 I was also drawn to a “white feather letter”. I had, of course, heard a lot about the white feathers and the women who would press one into the palm of the hand of a man considered to be shirking his responsibility to fight, or letters sent to their homes. To actually see one though, was quite shocking. Shocking in its simplicity, yet in the venom it delivered. I felt for the men who received these, delivered by women who were themselves, still safely at home, not in the trenches and experiencing all the horrors of the war, that other men, women and boys were living through daily on the battlefields of Europe. Those small artefacts in the museum really moved me. 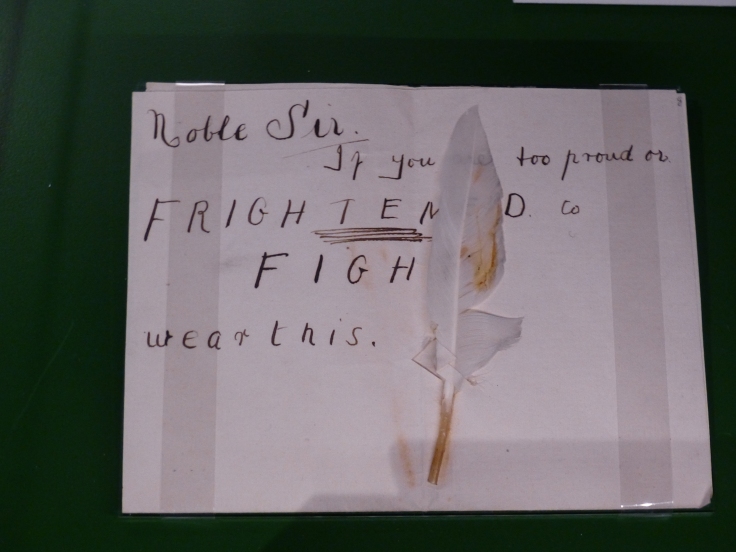 The other exhibit that was particularly interesting was Family Life in World War Two, which showed the life of one particular London family who lived through the Blitz and the Second World War. We discovered that  Anderson shelters were not built for Steve’s dimensions.

As a child, I was routinely fed a spoonful of cod liver oil every day, delivered by mum’s swift flick of the wrist, that managed to get the spoon in the mouth and the foul liquid down the throat in one deft movement. No sooner was the spoon out of my mouth, than mum was passing me the container of Ovaltine tablets, to crunch a few of those to take away the awful taste of the oil and replace it with a dose of chocolate instead. We always seemed to have the cod liver oil routine at breakfast time, so no doubt it was also accompanied with orange juice too, so this sign brought back memories even for me, long after the war years that I had not experienced. It was given to children during the war, to boost nutrition, given the somewhat restricted diet they had during those years. I certainly didn’t have a restricted diet as a child, but I stayed healthy and active, so I guess the cod liver oil, orange juice and Ovaltine prescription each day, went someways to keeping me healthy and hearty! Good onya mum!

We stayed at the museum until closing time, at which time we again navigated the puddly obstacle course of city streets, back to the Underground, where we again joined the sardines for our squished, but enjoyable, ride back to our hotel.

Today didn’t exactly go to plan, the weather made some things a little difficult to achieve or threw some curve balls our way, but we still managed to fill the day with highlights and t’riffic experiences. We saw St. Pauls, we joined the shoppers in Harrods, I met some more nice people, we had an interesting visit to a museum that had some moving stories to tell and all the while, the rain came down, and down, and down. It didn’t stop all day. However, neither did we! We just kept going and going and going, taking in as much as we could, regardless of the sogginess of the day and ourselves. We won’t be stopped in our quest to roam, discover, experience and explore. More opportunities await tomorrow. Are you ready Ira? I’ll put you on standby!

4 thoughts on “Ira’s Adventures in London”