The day dawned mild and clear without a breath of wind at the delightful Sublime. We packed up, had our campers’ breakfast of oatmeal and muesli bars in our room and then set off to settle the weighty bill. The manager, the lovely Goncalo was sitting eating his breakfast near reception.

“Are you having breakfast?” he asked.

“No thank you,” said Steve, as we thought we couldn’t hand over more of our precious Euros on a fancy breakfast.

“Please, please, it is all yours,” said Goncalo, “it is included.”

So we once again switched on our Hobbit tendencies and tucked into second breakfast and since we were the only people in the whole place, the buffet was all ours! I looked at the scrumptious looking loaf of crusty, ciabatta style bread and thought, ‘will I or won’t I’? Now you see, I’ve had this weird reaction to gluten the last few months, which sprang up out of the blue and has been annoying me ever since. A few months ago, just before my last marathon I picked up a virus and then started having weird things happen when I ate anything with gluten, so I just thought my system must have gone haywire and things would right themselves, but it’s gone on and on. So when I eat bread at home I straight away feel sick, get jelly arms and legs, tight chest and tingling lips, which is most annoying, given that I’ve never had any allergies to anything, ever my whole life. I’d read a few different accounts from people travelling in Europe though, who said they found they could eat all manner of bread over here without getting any sort of reaction, because it’s much less processed and the way the wheat is farmed means less chemicals and so on and so on. So I looked at the bread and thought, I’m going to test it out…and then…deeee-licious and not a sign of a tingle or jelly legs at all! You little ripper! If I can kick this annoying reaction while I’m here I’ll be stoked! So I tucked into delicious bread for second breakfast. As we were leaving I asked the girl serving if it would be rude if I took a couple of pieces of bread with me. She didn’t really understand what I was asking but with a bit of pointing and body language we got there and she wrapped up some more slices for me to take with us. Goncalo then helped us bring the bikes up from the garage and asked, “Is there anything you’d like to take with you? Anything from breakfast you would like?”

“Please, please, take it all, it will only be put away. Please take anything, I will be most pleased if you would.” So back in we went and came away with more bread, some fruit and a bonus croissant for Steve. What lovely people and what a beautiful place. Goncalo then offered to fill our water bottles too. 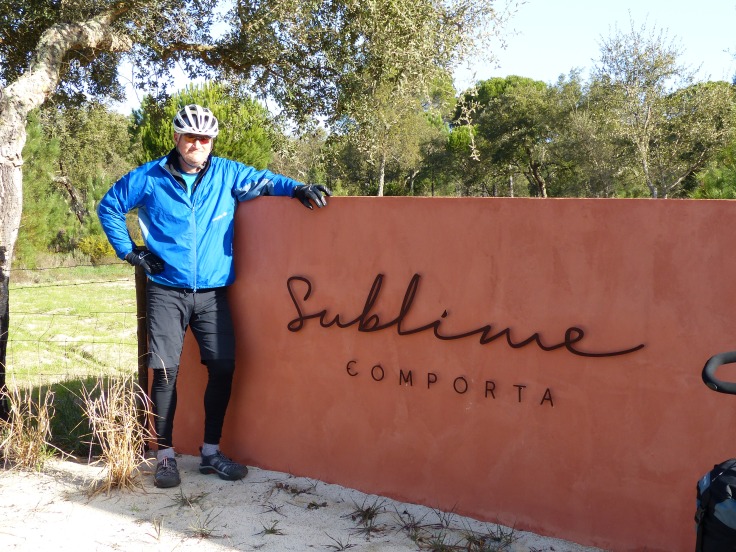 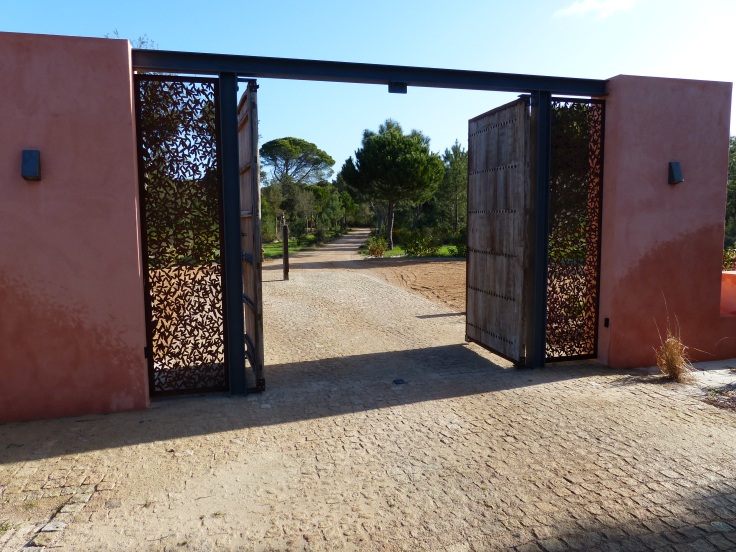 Feeling very spoilt and extremely well cared for, we pedalled down the driveway again and through the parkland onto the main road that would take us the short distance (wait for it, this is us we’re talking about, do you really think a plan to only go a short distance will actually end up that way!?) to our next campsite at Praia da Gale, a mere 21km down the road. Off we pedalled on a beautiful, clear, windless morning waving to some locals, a cyclist and some workmen on the road as we went. As we approached the workmen, there were speed limit signs telling drivers to reduce speed. The final sign was 30km/h. For some reason, I saw that 30 as a challenge. ‘I wonder if I can break the speed limit?’ I thought. So, with a grit of the teeth and a focused stare, I cranked the gears into high, pushed down on those pedals and set off, with one eye on the road and one on the Garmin in front of me…17km/h…21km/h…on I surged with a will and determination like a Jamaican bobsled team…24km/h…26km/h…could I do it? Could I speed through roadworks?… No. Afraid not. I got to 27.4km/h and the weight of my load got the better of me. Ah well, it was a challenge worth attempting even though I must have looked like a prize idiot!

As we were riding along we came across a couple of signs / graffiti  that we felt were there for us! The one on the left certainly describes this journey we’re on and the second one is there to remind us of how lucky we are to be doing it, even when things get tough and to keep the big picture in mind. 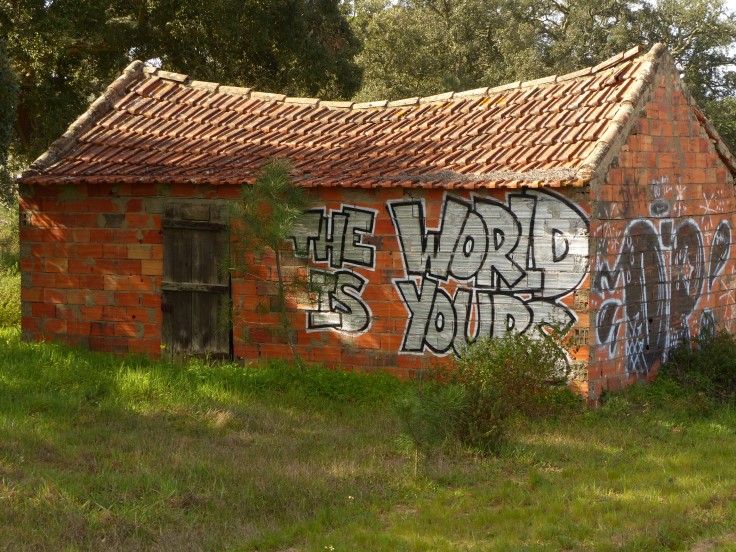 We came to a turn-off and checked the map. Yes this is where we needed to go, so around the corner we went, to be confronted a few metres later by the IC33 freeway! Ah, no, this is not where we want to be! We did a quick about-turn and speed pedalled the wrong way up a slip lane to get back onto the road we’d left, consulted the map again and decided we should have turned down the previous road…the one with no sign. So off we went again. Wrong turn #1.

This road took us through the countryside where we passed by orange groves, men in gardens and fields working the land, paddocks of goats and sheep with neck bells jangling and…hills! 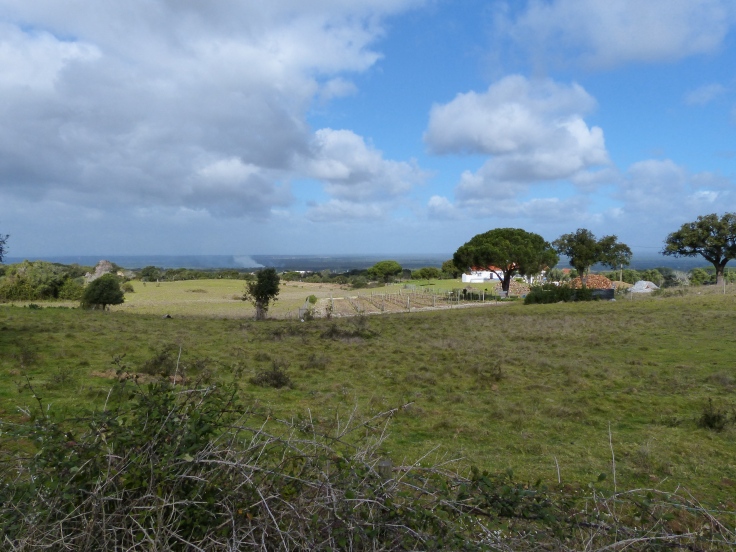 I found it hard going today because one set of gears on my bike had decided to go on strike so I couldn’t get into low gear, which made hauling the load up hills in higher gears that extra bit tougher. We came to another turn-off and we consulted the map.

Note to self: I think we need to be cautious whenever we use the word THINK, because so far whenever we THINK we’re going the right way, we are not! So off we went, heading towards the coast, up more hills, until we hit a lot of sand…deep sand…bike bogging sand.

“Wait,” said Steve, “I’ll just do another check to make absolutely sure we’re going the right way.” So he brings out a different map, a more detailed map (I was wondering why this hadn’t made an appearance earlier) and eventually said, “we’re on the wrong road, we turned one road too early.” Wrong turn #2.

Back we went, up the hills again to the main road, where we discovered a mere 100m down the road, a large blue, unmissable sign saying “Campismo”. Finally, we were heading the right way. Unfortunately and unavoidably, this road had some doozies of hills on it, so a bit more huffing and puffing was needed. We eventually arrived at the campsite, a nice place by the beach, 35km later. We rode up to the man in the little box beside the boom gate and asked about camping. He said something that Steve took to mean asking for ID, so he handed over his passport. The man then told us to go through.

“Where can we put a tent?” asked Steve and the man took us to a site map and showed us a large area and we could choose any spot we liked. So we found our patch in a nice spot under the pine trees and pitched the tent. I asked Steve what had been said and had we arranged for two nights and Steve said he must get his passport back when we leave, so that’s how they know how long we’ve stayed. I said I hadn’t realised the man had kept Steve’s passport and it’s not best practice to leave a passport with someone we don’t know. So we set off walking back up to the entrance and discovered Reception, where we walked in to find a smiling lady behind the desk holding up Steve’s passport and asking, “This?”

“Yes,” said Steve, “we made a mistake,” and so we sorted out the arrangements properly from there and all was well. So I don’t know what the poor fella at the boom gate must have thought we were doing or wanting and why he ended up with a passport from two strange bike riders, which he obviously then gave to the right person at reception, telling her who knows what about the strangers he’d just encountered! So we’re here in our tent under the trees, having done some bike maintenance and we’ve decided to stay here a couple of nights, just to rest a bit and do some laundry and bits and pieces of necessaries. Oh, and I met a friendly cat here too, who happily ambled up to me with a very loud meow, so we chatted for a while and I patted him and decided he was Ferdinand, because he looked like a Ferdinand. As I walked off, Ferdie trotted after me with a loud meow, so I stopped to pass the time of day for a little longer and give him a few more scratches under the chin. Friendly and talkative chap.

Even though we’re here in our tent, feeling a bit chilly, wearing almost every layer we own to ward off the brisk night air, listening to the waves crash on the beach, we have a little bit of Hotel Sublime with us. Steve pinched the key! Yes, there must have been something in his subconscious that said we were not meant to leave, because when we arrived he found the room key in his pocket – no small accomplishment given that the key was hanging on a huge great tassel the size of a curtain pull! There followed an email to our friend Goncalo and arrangements were duly made to ensure its safe return. We couldn’t have a piece of Sublime roughing it in a tent could we!?

Today also marks our week milestone – a week in Europe, a week in Portugal and a week on wheels. So what have I learnt, experienced or discovered in that time?

2. The people we have met so far have been the poster-people for friendliness and helpfulness.

4. We are somewhat navigationally challenged when we can’t recognise places or read signs.

5. I’ve managed to make culinary delights from next to nothing and savoured every mouthful.

6. I’ve been bone-shiveringly cold most of the time, but it’s unavoidable so get over it and it helps to find creative uses and places to position a hand-warmer sachet.

8. No matter what and no matter how wrong it might sound, always have a go at speaking the language to the locals – it will always result in a smile.

9. Little things make the ordinary things special when you stop to notice them – a view, church bells ringing in a little town, a beautiful building, a comfy pillow in a comfy bed, a cup of tea after a hard day, a cat called Ferdinand taking the time to say hello…little things, but special things.

10. Running, riding and roaming are three pretty good ways to spend one’s time. (I’m just waiting patiently for another couple of weeks until I can do the first one again). You don’t need entertainment, just legs, wheels and a spirit of adventure.

So, one week’s in the bag, glitches and gems and all. Where to next?

3 thoughts on “Some More Wrong Turns”