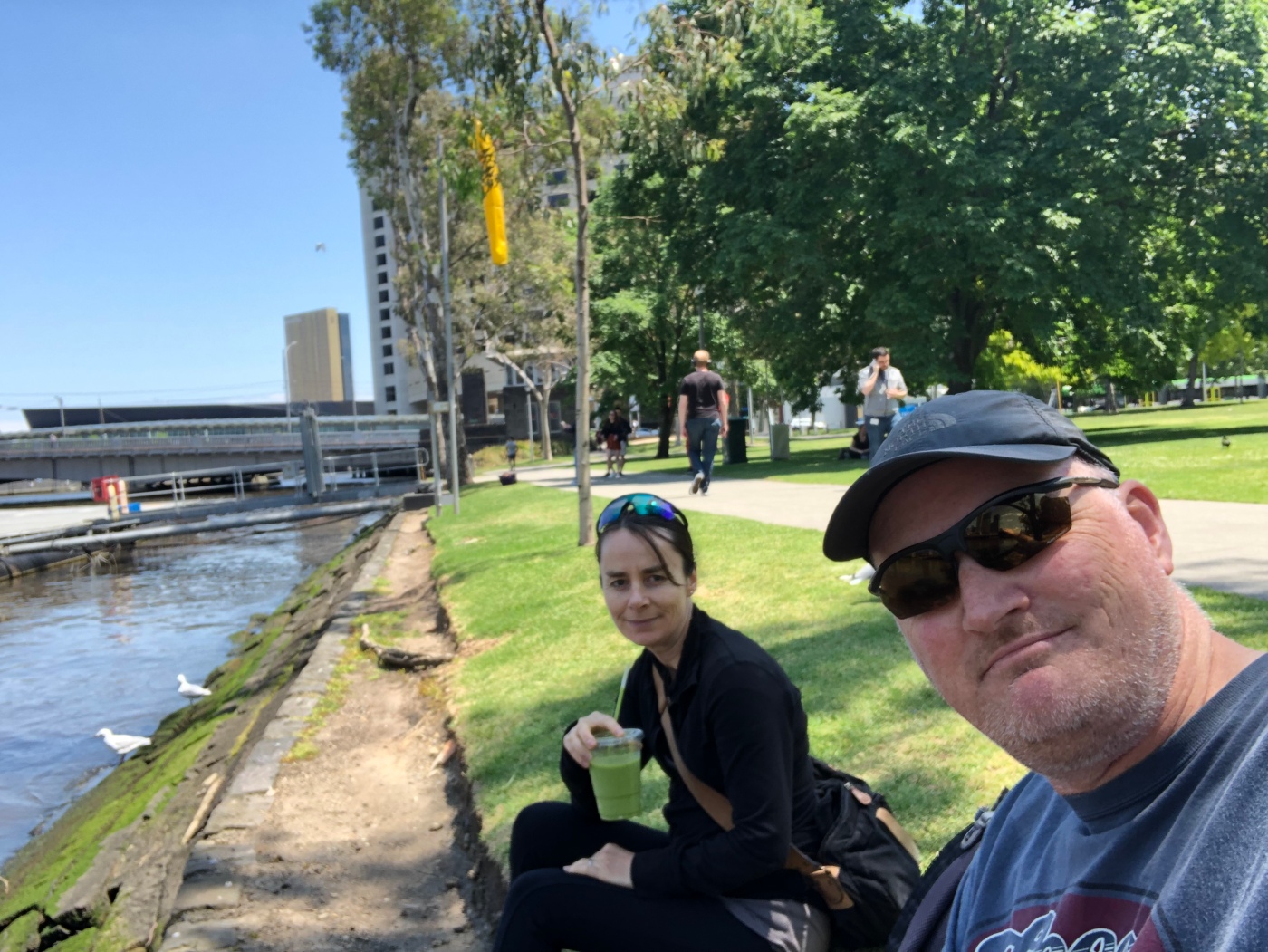 A long weekend in Melbourne, that’s the latest outing for the two country bumpkins from Tasmania, so we took to the sky on the little rubber band propelled plane that serves as transport between our little island state and the “big island” of the rest of Australia and touched down in Melbourne.

We are here almost by accident rather than design. I had planned to run a marathon in Melbourne a couple of months ago but events conspired to derail that plan, so we needed to use up our already booked flights, so we took advantage of yet another of those marvellous inventions…the long weekend and tootled across the ocean to the Big Smoke.

We also had a plan to do a spot of trip shopping. We are off again next year to do some more pedalling about Europe with the plan to spend six months cycling from Croatia to Ireland. There are still a few bits and pieces we need, so we decided to take advantage of the wider choice that a big city provides and took to the streets of Melbourne to search for items on our list.

Day 1 started a bit chilly. No, not the weather, that was absolutely fine, I’m talking about a small, brisk problem of water temperature. Into the bathroom I go, turn on hot shower tap, water gushes forth…cold…waiting, waiting, waiting…still cold…more waiting…hmmmm, should have warmed up by now…still cold.

Off with the water.

On to the phone.

Inform reception of no hot water.

“Very sorry ma’am, I will notify the manager. How long have you run the water?”

“A good couple fo minutes,” I inform the nice gentleman.

Back on with the taps, as I avert my eyes due to the guilt and concern at the litres of wasted water gurgling down the plug hole.

Waiting. Waiting. Knock at the door.

Josh had arrived to have a look, decided there’s something wrong with the thermostat, but the hotel is fully booked so he can’t relocate us and is very apologetic.

“It will be fixed sometime today,” he assures us.

“That’s OK,” I say, “these things happen, I can have a cold shower and rough it for a day.”

Many grateful thanks from Josh.

So…that all led to the chilly start to the day. Steve decided to just go for the no-shower-at-all option, but I instead braced myself, took a deep breath and launched myself into the chilly spray.

“Oooohhhh,ah-ah-ah-ah-ah-ah, oooooo,” as I danced and hopped and tried to draw breath as the cold blast of water sprayed me like a St Bernard shaking over me after an icy roll in the snow.

I just knew Steve was out there, beyond the door, laughing at my plight. Still, it’s not as if I haven’t stood up to icy showers before, such as those I experienced in sheds, in the middle of paddocks, with frost on the ground, during an English “summer” at village campsites. I have endured before, I shall endure again. So, that was an unexpected and bracing commencement to our city adventure.

Off we set into the morning madness of the city. This is when I feel most like a country bumpkin, as we trickled into the surge of human tide that swept all around us. It was a sea of people and were were paddling against the current. Where we come from there’s no such thing as bustling  commuters or crowds. It is just an unheard of and never seen phenomenon. That which is as common as a garden sparrow in the city mornings is but a dodo of an affair in our neck of the woods. So we battled the bodies up the street.

“This would just do my head in!” I said to Steve, as my bumpkin threshold for busyness reached its peak.

We eventually found a slow moving tributary off the rapids of the bodily commute and took ourselves into calmer waters. One bonus of being amongst crowds of people though, is the interesting conversations we hear beside us.

“Some people say,” came one voice at my shoulder, in a very derisive and critical tone with an audible sneer, “that it’s bad luck if you put your Christmas tree up before December.”

“No!” came the emphatic reply, “A month before! You’re allowed to put it up a month before Christmas!” This was said with such conviction that I thought I must have missed the policy announcement that required permission to be festive, because I learned that it is “allowed” to be done as early as November 25. I must say, I am one of the sneerers at early Christmas festivities, but still, this conversation was an education.

Another young, smartly dressed young business woman passed beside us, in sparkling conversation with her male colleague. “I put the tree up last weekend and I trimmed the tree and it was byoodiful!” She said with smiles and a face of delight and I learned again that the festive season is clearly on the minds of Melbourne foot commuters.

We then began our day of getting things done. We hit a shopping centre and while I knew I was supposed to be looking for specific things, five minutes in and I’d had enough. Steve was looking in earnest for the items on our list and I had already vagued out. “I’m over it,” says I in my pathetic bumpkin tone, “I know I should be looking for things but I’m over it.” It was the artificial light and artificial air and artificial music and crowds and noise and…but, enough! I was on a mission and we must push on.

This shopping expedition, I must say, was partly to enable Steve to experience the joy of finding items of technology that we “need”  and that would allow him to play with said technology hither and thither with joyous abandon. In preparation for next year’s pedal, he has become the proud owner of a Go-Pro (teeny tiny miniature video camera for those unfamiliar) and so of course there were now much “needed” Go Pro accessories to be purchased. Off we went and managed to locate the items that Steve assured me would make all future adventures far superior, with all memories filmed for permanent posterity thanks to his new teeny tiny toy.

We finally emerged from the bowels of the shopping centre, into the sunshine and actual real, airy air and decided it was time to refuel.

We found a small cafe down one of Melbourne’s many laneways and collected some lunch and set off for a park to feel air and grass around us. We looked across the murky waters of the Yarra and Steve tucked into his chosen tofu salad and I, being a less than enthusiastic member of team tofu, opted for a salad without the contentious curd and a very delicious green smoothie which went down very nicely indeed.

The sun shone, the cool breeze wafted off the brown waves of the river and the birds rose and swooped around us. Steve of course, set up his Go Pro and commenced filming…well…nothing much at all really. A ripple in the water here, a bird swimming there, a car crossing the bridge up there, but hey, things were moving slightly so they were just asking to be put on video, right. Right!

We finally set off in search of an item of travel necessity for myself, which was a pair of waterproof trousers. The only pair I had was a pair of ski pants I managed to find somewhere in England on our last travels, when I discovered that the pair I had with me were far from waterproof in the daily drenching we were getting from the rain that was our constant companion. The ones I found in England were though, of course, a foot too long and dragged everywhere I went until Steve’s mum came to the rescue. I still have visions of Pauline on the floor in our shared accommodation in Edinburgh, very kindly and patiently taking up those trousers for me with a packet of malt biscuits as a ruler to measure the hem. I’m still grateful! They lasted the trip but it was time to get a pair that fitted a little better. After much searching the outdoor stores of this bustling city I finally found a pair that were again, miles too long but with an elastic waist of the type that allowed me to pull those trousers up to chest height, thus rendering the leg length perfectly level with my ankle. I may look like a clown with a trouser waist almost level with my chin, but I certainly won’t be dragging the hem. I guess I will also have extra waterproofness from the waist up as well. Winner!

We then roamed on and swung by the Myer department store to have a look at their famous annual Christmas windows. I think this was my first viewing of this traditional Melbourne attraction. It was very, very good. The theme this year was Alice in Wonderland and each window was a scene from the story, with animatronic characters and a narration of the part of the story being depicted in the scene. It was so very well done and such clever design, it was nice to stroll along and see the story unfold with each step. Super.

Day of roaming complete, time to rest with a cuppa in a comfy chair and recover from a day of crowds and noise and traffic which we country bumpkins find a foreign and exhausting experience.

Tomorrow is another day and we will set the shops aside for a day of experiences over expenses and see what we can discover on a Saturday in the city. Being December 1, I’m sure festivities will be on the agenda amongst Melbournians and we will partake with spirit in whatever we discover, as we always do when on the roam. There will be nary a bah-humbug to be uttered! I will also ask Santa in advance, for a hot shower tomorrow please. I promise to be good.

8 thoughts on “Bumpkins in the Big Smoke”