The third and final instalment of our run, ride, roam trip to Stanley.

After a simply lovely weekend in Stanley, it was time to head home. We took it at a leisurely pace, driving the long way around and stopping to have a look at some places that leave us, as local Tasmanians, feeling embarrassed by our lack of prior knowledge or visitation. Time to see some more of our own part of this little island.

We turned off the highway and headed for the back roads, through the sleepy farming hamlets and onto the gravel roads, to have a look at Dip Falls. As we followed the signs (a much more reliable low-tech form of navigation!), we found ourselves with an option to turn up a side road and walk to The Big Tree. Now, with a sign as self-explanatory as that, with a landmark so literally named, we had to have a look and see just how big this Big Tree was. We parked and headed along the bush track for the short walk to this tree of the great stature. We had just come from the village of the big rock in the form of The Nut, so let’s take a look at this Big Tree. It was a lovely peaceful place, we had it all to ourselves and we strolled through the bush until we arrived at The Tree itself. It was indeed big. It was also over 100 years old and there it stood, so far surviving the elements and the loggers that made their living here felling such giants as this, in days gone by. I actually felt quite moved and felt myself just standing, looking up at the canopy so far above my head and I patted that great, gnarled, age-worn trunk. I just stood and patted it. I couldn’t help thinking in my head, “Well done. Well done you for hanging on, for still being here, for standing strong a century on. I hope you aren’t lonely. I hope you aren’t sad that others like you have gone.” Why I gave that tree human emotions, I don’t know, but I just needed to head-talk to that very special tree. I couldn’t help thinking of so many others like it who fall at the hands of industry in other parts of Tasmania, yet here was an example of what these magnificent trees could look and feel like, if allowed to live on. I gave it another pat.

We spent some time just standing and strolling amongst the trees, smelling the earthy, misty perfume of the bush, listening to the silence and looking up and around us at the long arms of the trees reaching skyward. We really should do this more often.

A short drive down the road and we parked for another short stroll down to the bottom of Dip Falls. Before we started the walk though we had to…don the raincoats. Yep, Ira the blue coat was back in action because of course, we had arrived, so it rained!

Down, down, down the steps we went, with the thought in the back of my mind that were going to have to climb back up, up, up these steps at some point. But…set that thought aside for now! Now, as waterfalls go, Dip Falls proved to be not particularly grand in size or force, in fact they were quite small and running rather than crashing, but it was the look of them that was so interesting. The rock of the falls was tiered in layers, almost as if someone had placed single rocks together and created a rough, layered wall. I don’t know what phenomenon of nature created a rock formation like that, but it looked great and suited that almost gentle flow of water just perfectly. After some time taking in this modest but so-worth-the-visit waterfall, we began the climb back up the steps.

“My legs are sore,” commented Steve. “I could feel them as we came down The Nut yesterday and I knew they were going to be sore.” Ah, the Big Fella was experiencing a bit of delayed muscle unhappiness, but on he went, up the steps, with quads doing just a little bit of grumbling along the way.

We headed back to the highway and continued on, homeward bound to our little abode tucked into the bush in the hamlet down the coast. We have moved to this spot, as a direct result of our European pedalling trip and the learning and thinking we took away from that experience. It was indeed life changing in many ways. I might share the after effects of that trip in another blog post perhaps, because the effect has lived on and taken root in our daily lives.

Along the way home we took a brief stop at Table Cape, so we could look back along the view of the coast and remind ourselves, yet again, of how lucky we are to live here, in this peaceful and picturesque part of the world. 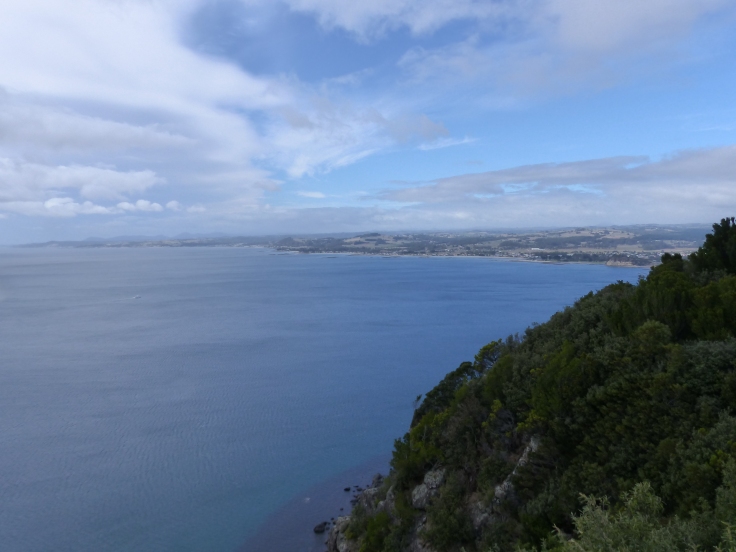 Well, we had a delightful long weekend. Again, I applaud and thank, with accompanying brass band and banners, the superstar who invented the concept of a long-weekend. We have had three glorious days of time to explore, experience, discover and run, ride and roam around parts of our own island home. We vow to do more of it; to take the time to appreciate what our own place has to offer, because it’s a special place our little Tasmania. We love it and should let it know more often by exploring more widely. It shall be so!

What do you love and appreciate about your own little part of the world?