I love England in winter. I love foggy days. Needless to say, I loved today, which was a foggy, English winter’s day. It was grey and damp and foggy and cold, so we could have stayed indoors, or we could get with the locals and get outside! Out we went.

We decided to take a stroll through the mist, so headed for a local park to circumnavigate its big lake. It was delightful. The mist hung around, shrouding the lake and trees in the grey haze and we strolled along the path, beside the still water. We were immediately joined by a gang though. No sooner had we set foot on the path, than the resident birdlife saw us and must have thought we were an easy source of lunch! They took off, in one united crowd, running flat out towards us, surrounding our ankles and looking expectantly for some sort of hand movement that might signal the throwing of some tasty morsels.

“Sorry to disappoint you fellas,” I apologised.

We took a leisurely turn around the lake, greeting fellow walkers who were out enjoying the crisp, brisk, winter’s air. The lake looked lovely, the stark trees looked beautiful and it was all in all, just a splendid place to be. 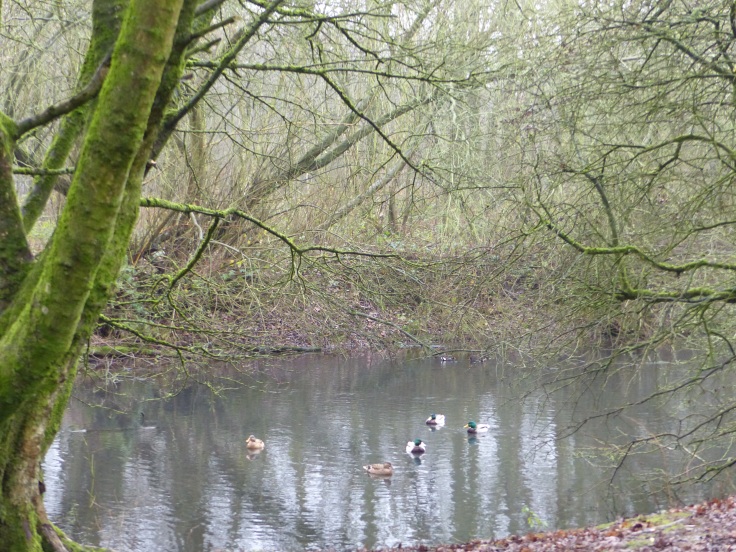 I even got to witness the first match of a new international tournament. Y’know that game we’ve probably all played at one time or another, as kids…The Staredown. Played between two opponents, who stare at each other, the winner being whoever doesn’t blink. Well, today saw the inaugural International Interspecies Staredown. In one corner we had Steve “The Stare Maestro” and in the other corner, was Stanley “Star of the Stares” Squirrel. Game on!

Who would blink first? Who would walk away with the coveted international title? Who would reach for the hydrating eye drops at the end of the first round?

With Steve in the communing with nature frame of mind, he adopted his favoured personal pose with some of the local tree-folk. I just think he was trying to give his deflated status a boost by saying, look at me, I may be defeated by a squirrel, but I make a darn fine tree!

After a pleasant stroll around the park, we popped into the cafe, where we enjoyed crumpets and a pot of tea, looking out over the misty water. Perfect. We sat and talked about our travels again and began to plan our next grand cycling adventure, for whenever it may happen in the future. We named the places we want to go, or places we would revisit and spend more time exploring. So much to see and all the better to see with pedals!

The rest of the day was taken up with organising and housekeeping activities, but it was a grand day. A thoroughly British day, in the great outdoors, in the chill and the grey and the fog, not to mention the tea and crumpets. Perfectly perfect. I even learnt another new word and again, this experience occurred in the Tesco self-checkout! The lady in charge came to our assistance, with a “You right darlin’?” and when she’d fixed the problem, she said, “There y’are shug.” That’s what it sounded like…”shug”. Hmmm, I hadn’t heard that one before. Then I heard her directing people to available checkout spaces, “There’s one there shug.” “There darlin’, down the end shug.” Then I heard a man thank her with a, “Thanks shug.” I wanted to ask her what she was saying, but she was flat our directing foot traffic and fixing the inevitable self-check machine meltdown, so I left her to it. When we got back to the hotel though, I asked the girl at reception what I’d just heard.

“It sounded like shug,” I explained and told her of the context.

“Oh!” I said, the penny now dropping, “it’s like calling someone love or darl’.”

I was still a bit confused about the origins of something that sounded like ‘shug’ though.

“Can you say the word again for me?” I asked.

Ah-ha! I finally got it! I finally got my interpretation skills to kick in and picked up the accent and what the words actually were. So what sounded like ‘shug’, was just a shortened version of “sugar” or as we would say, ‘sug’ but pronounce “shoog”, it just sounded like “shug” in the Stoke dialect! I chatted with the girl a little longer and she told me about her uncle in Australia who she thinks is the only Australian who supports Stoke City football team and he has his whole local pub supporting them and calling people Duck!

I thanked her for her help and explanations. “I understand now!” I said, and as I was walking away, I finished with, “thanks Duck!”

She beamed and laughed!

I’m telling you Duck, it was a day to remember. A smashing day Sug!

4 thoughts on “Aint Life Just All Tea And Crumpets!”