You better watch out, you better not cry, better not pout, I’m telling you why, Santa Claus is coming to town…

That’s what we heard as we entered the Sainsbury’s self-checkout this morning. No, not from the piped Christmas carols that take over the air space in supermarkets at this time of year, but from the Sainsbury’s lady who was assisting. She was smiling and singing and walking up and down the checkouts, seeing if anyone needed help, giving a cheerful “Thank you. Goodbye” as people left and she kept singing carols the whole time.

What a delightful way to start the day. Look after that one Sainsbury’s, she’s a gem.

After a festive trip to the supermarket, we hopped in the van and continued on our way. First stop was another National Trust property, Tredegar House and garden. We began with a breezy and chilly stroll through the gardens, which were beautiful, then through the stable block, where we spotted a very un-Victorian resident!

The house was another property that had been set up for Christmas and it was absolutely marvellous. The volunteers were in period dress, there were Christmas trees and decorations in the rooms and the grand fireplaces were festooned with garlands of pine and ribbon.

“This is magic,” I said to Steve. How could one not feel festive on a blustery winter’s day, in a grand, historic home, with Victorian Christmas touches all around. Special and magical.

“Do go through to the dining room,” one of the ladies, in her bonnet and voluminous petticoats, directed us, “but I must warn you about Scrooge. He’s in rather a bad mood today and we’d be ever so grateful if you could cheer him up.”

“Thank you very much,” the Victorian lady replied.

When we entered the dining room, the table was covered in a Christmas feast, but with cobwebs draped over every surface. There, at the head of the table, was Scrooge himself, in his white nightgown, night cap and a pile of gold coins in front of him.

We laughed, although poor ol’ Scrooge maintained his bah-humbug spirits. It was another touch that made for a truly enjoyable visit.

We chatted for quite some time with another Victorian gentleman, when we asked him about the history of the house. It was owned by the Morgan family who were extremely wealthy, liked to have the very best of everything and at one time or another seemed to own half the countryside. Just the house itself was ahead of its time and one of the architectural wonders of Wales. The red brick it’s built from, wasn’t seen at that time, with most houses being built of grey stone. The gentleman showed us through to an area that wasn’t being seen by any of the other visitors, to show us the telephone, which was the first telephone to be installed in a home in Newport.

“The telephone number was Newport 1,” he said with a chuckle, “we don’t know who had Newport 2.” We stood and chatted about the history and he asked us where we were from.  As we thanked him and walked away, he followed us to where we had stopped to look outside and he continued chatting and telling us about the house. He was so nice and so friendly and it was lovely to talk to him.

“So nice to meet you,” were his parting words.

On to the kitchen, where we were greeted by a large, jolly kitchen maid who began to tell us about the amazing technology used in that room. It was quite amazing, considering the age of the house, parts of which dated from the 16th century. The pride and joy was an enormous pressure cooker which, she told us, was one of only two remaining in the world, still intact. The gauge would be set and the water boiled to create steam, which would heat to a temperature according to the setting on the gauge. This would then be forced into other pipes, which would be used to work a series of separate pressure cookers, to prepare food. It was quite an ingenious design.

The other piece of equipment, which dated back to the 16th century, making the technology quite amazing I thought, was the spit turner, in the range. The range would be used for cooking, the heat would rise up into the chimney, where it would turn a set of fans. The fans would then turn the rods for the spits, on which the meat was hung. It was so clever!

“It was self functioning and the spits worked automatically,” she explained, “so they didn’t have to employ a spit-boy to sit and turn the handle on the spits.”

I had never heard of a spit-boy before, but thought it was probably quite a sought after position in the middle of winter, since he got to sit by the fire all day! The Morgans didn’t have one though, they had their self-powered spit turner instead.

“Would you like to stir the pudding?” our jolly kitchen lady asked us. “You must stir it three times clockwise and then make a secret wish. You mustn’t stir it anti-clockwise because that will summon the devil!”

“Oh!” I exclaimed. Nothing like a bit of pressure from good ol’ Victorian-era superstition to make one forget the count! Was that two stirs around the bowl or three I just did? Did I wish? I think I forgot to wish!

It was all such fun! We strolled through the other rooms and chatted to more of the volunteers and I left feeling extremely festive! It was a wonderful place to visit and the National Trust had done wonderful things to put it all in the Christmas spirit. Jolly good fun!

We set off again, heading north towards our destination for the day. As we left Tredegar House, we had to get back onto the motorway, which meant navigating some roundabouts. Now, my trials and tribulations with roundabouts have been well documented, but it was Steve who felt the stress of them today. These were five-lane roundabouts and as we entered the first one, we were in the wrong lane.

We continued up the highway for a mile, did a 360 at the next roundabout to u-turn and go back for another go. Here we go, into the roundabout…wrong lane again! The car had felt quite chilly when we got into it after leaving the house, but it was now getting very warm from the steam coming out of Steve’s ears! As Steve continued shouting at the road design, we continued up the road, did another turn around and back we went again for a third attempt. In we go, and…out the other side! Steve had done it and we had successfully navigated the roundabout after only three attempts. Success, with no ill effects other than some blue air now circulating inside the van!

Off we went, being blown and buffeted around. There were more weather warnings today, not yellow ones, but red ones, for winds up to 80 miles per hour (128 km.p.h), rain and flooding, with some rivers already having burst their banks. Despite the weather, we stopped along the way to have a look at Aberdulais Tin Works and Waterfall. This was the remains of a tin works, which was the last industry in the area and dates from 1584.

We walked up to the falls, which were absolutely gushing, with all the rain, read some information and watched a short film about the history of the site. 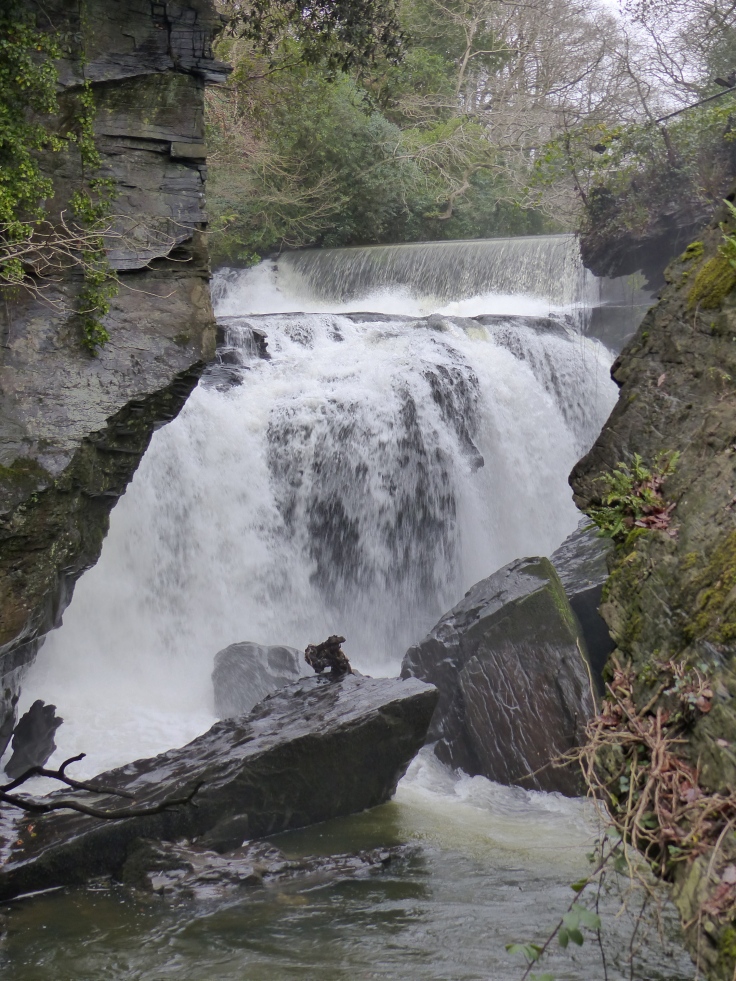 Many children worked there too, working twelve hour days and longer.

“I comes to work at half past five in the morning and remains till six or seven at night. Never got much hurt. The sheets sometimes tear my fingers, mother ties them up with rags and I work on again,” was an account from one seven year old working there in the 1800’s.

It was a really interesting place to visit. The National Trust has now installed a hydro-electricity generator, with the largest electricity generating water wheel in Europe, so the site and waterfall are now being used for sustainable energy production. We spent some time walking around the remains of the buildings and works. “We’re being very British,” I commented to Steve.

“That’s good!” he replied. We were indeed taking a leaf out of the local book, by being outdoors in the awful weather and ignoring the wind, cold and rain, to enjoy something in the great outdoors. I felt like we’d joined the team! 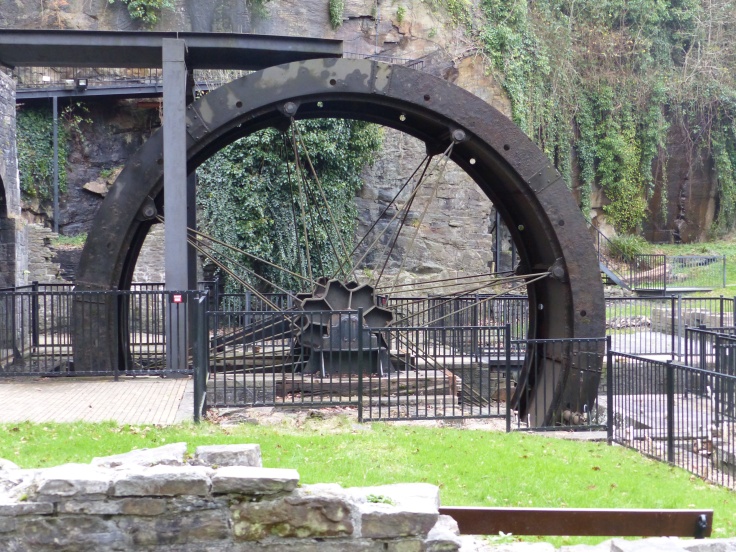 As we continued our drive, we were again on narrow country lanes and at the bottom of a hill we were confronted with another ford. This one didn’t evoke expressions of awesomeness though. We stopped and looked at this one. The river was flowing fast, the water was swirling and it was a lot deeper than the last one, with the marker showing a nudge over two feet deep. Hmmmm, pause for thought. It was all of 4 o’clock but growing dark, so we decided that stalling the van in the middle of a fast-flowing river, in the middle of nowhere, in the dark, was a risk we’d best not take, so we reversed up the narrow road, turned around and set off for an alternate route.

We slowly continued on our way, in the dark, along those narrow lanes. At least we could see headlights to warn us of another car coming at us head on around a blind corner, so we could squeeze ourselves into the hedge. We eventually made it to our accommodation, a cottage within a hotel complex in the middle of the Pembrokeshire National Park. There’s no phone signal and the wifi wasn’t working in the cottage “due to the weather” we were told, so this blog post required a speedy run through the dark in the wind and rain, over to the main hotel building to sit in reception and tap into their wifi. The things we do!

It was such a great day. A wonderful festive experience in a beautiful historic house, exploring some history outdoors and meeting more gorgeous people. It might be winter and it might be cold and it might be dark at a ridiculously early hour, but it all just gets better and better! I’m loving it! I’m loving winter, I’m loving the places we see and the people we meet. I’m loving the whole atmosphere and spirit that’s surrounding us, everywhere we go. England the Enchanting, Wales the Wonderful, Scotland the Sublime (sorry Ireland, we haven’t met you), have all given us the greatest of Great Britain! Britain the Great, you are a gem, you are a diamond, you are precious pearl! Thank you for the treasures you are giving us!

2 thoughts on “Feeling Festive and Being British”