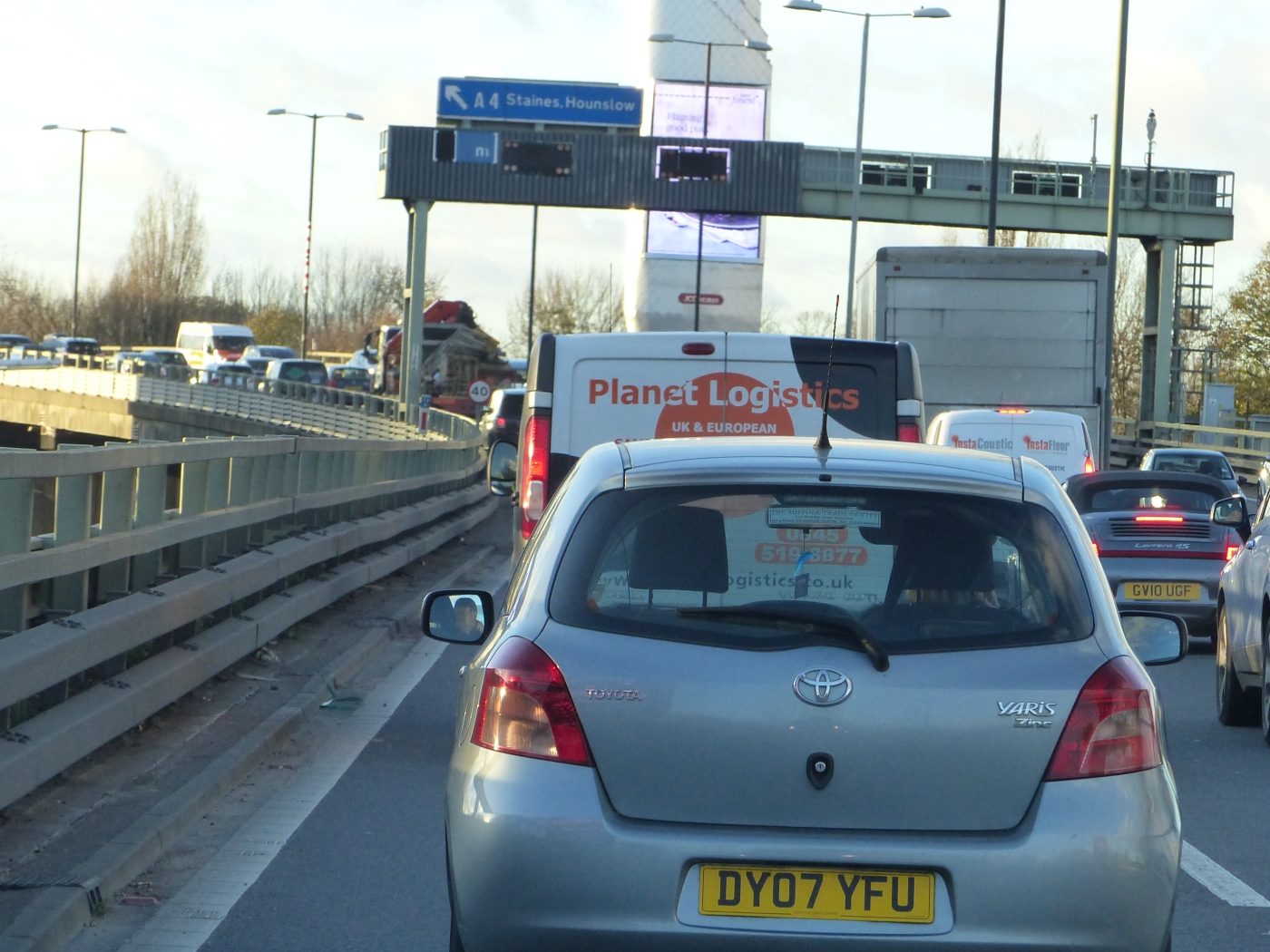 What a day. First, quite a few glitches with the van hire this morning, which had us leaving London a few hours later that intended. We were eventually on the road, in our latest form of between-rides transport. We’ll be motoring around the country in this time of winter woolliness and get the bikes out at every opportunity when we stop over in places. Our motoring didn’t get off to the best of starts though. We crawled through London traffic, trying to get out of the city, but being continually thwarted by road closures and road works, which slowed traffic to a snail’s pace. In two hours, we had travelled a grand total of seven miles! That’s only 11km! In two hours!

That was basically the day…crawling, edging, creeping along streets, roads and even motorways in bumper to bumper traffic. I take my hat off to bus drivers, taxi drivers, couriers and all those other people who have no choice but to deal with that city traffic day in, day out.

We did eventually make it out of the city and we did eventually make it off the awful motorway and stayed the night in a nice little pub in Stoford, just outside Salisbury. The walk from the car park to the pub was enough to tell us that winter had arrived! It was C-O-L-D COLD! Tomorrow we start afresh, in the countryside and with the grand expanse of England before us.

When we turned on the telly this morning and watched the weather, a few choice words jumped out of the report…”wind”, “Arctic”, “gale”, “snow”, “minus”. Hmmmm, there are some words there that we don’t hear at home! The weather forecast was for a high of 4C, “feels like -1C”. So even though we were expected to reach a tropical high of 4C, the chill from the “Arctic winds” was going to make it feel a lot colder…below zero colder! We rugged up and power walked from the pub door, into the very strong and bracing wind and piled into the van to begin our next adventure.

Salisbury was a delightful way to start the day – a lovely place with stone houses, stone walls and hedges and the trees with a mixture of autumn colours and winter nakedness. I loved walking along, crunching on the leaves as we walked along the narrow little streets, beside cottages and past a children’s Saturday morning rugby game in progress. Delightful.

I popped into Poundland to pick up a couple of necessaries and the man serving me just made me grin all the wider.

“Good morning madam…would you like a bag madam or do you have one of your own?”…”that’s £4 madam”…”there you are madam…”

Oh, I love these people! To be called “madam” numerous times in one exchange, by a man working in a pound shop!…Special! The level of politeness here just makes me smile and smile again. Even in the underground at peak hour, when everyone pours off the trains at the same time, there’s no pushing, everyone waits calmly for the people to get off before they get on and then everyone just sort of naturally merges into an orderly queue at the bottom of the escalators and just politely and calmly waits in line. It’s wonderful! I love it! Today, in that store, was just another example of this national culture of politeness!

We strolled in the brisk wind and all the time I was admiring people’s hats – people wear hats! All sorts of hats! There are beanies, cloches, wide brimmed, aviator style with floppy ear warmers, all manner of headwear to create a barrier between the cranium and the cold! It was a parade of pom-poms and peaks!

Salisbury Cathedral stands prominently in the town and it was indeed a beautiful building. We walked around it, admiring this grand church that we had seen in a Constable painting and it looked especially splendid set against the bright, winter’s blue sky. 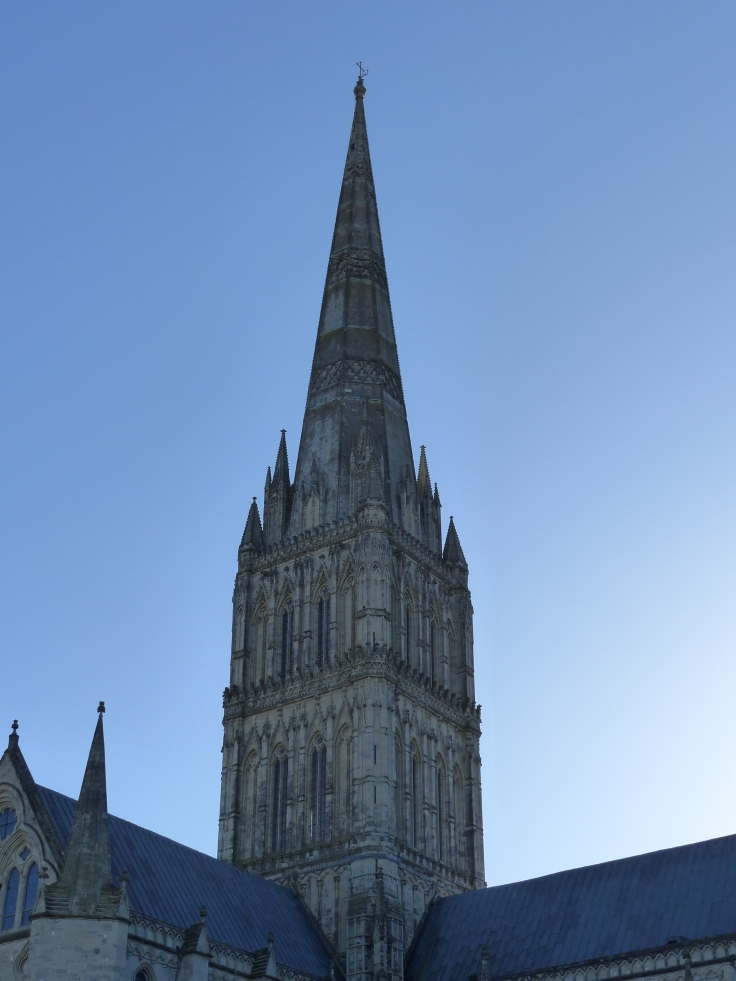 We were able to walk into a room that had the Magna Carter on display. That was quite special to see, along with the displays explaining its history and significance. Four of the clauses in the original document are still in British law today, such as, “…to no one will we sell, to no one deny or delay right or justice.” 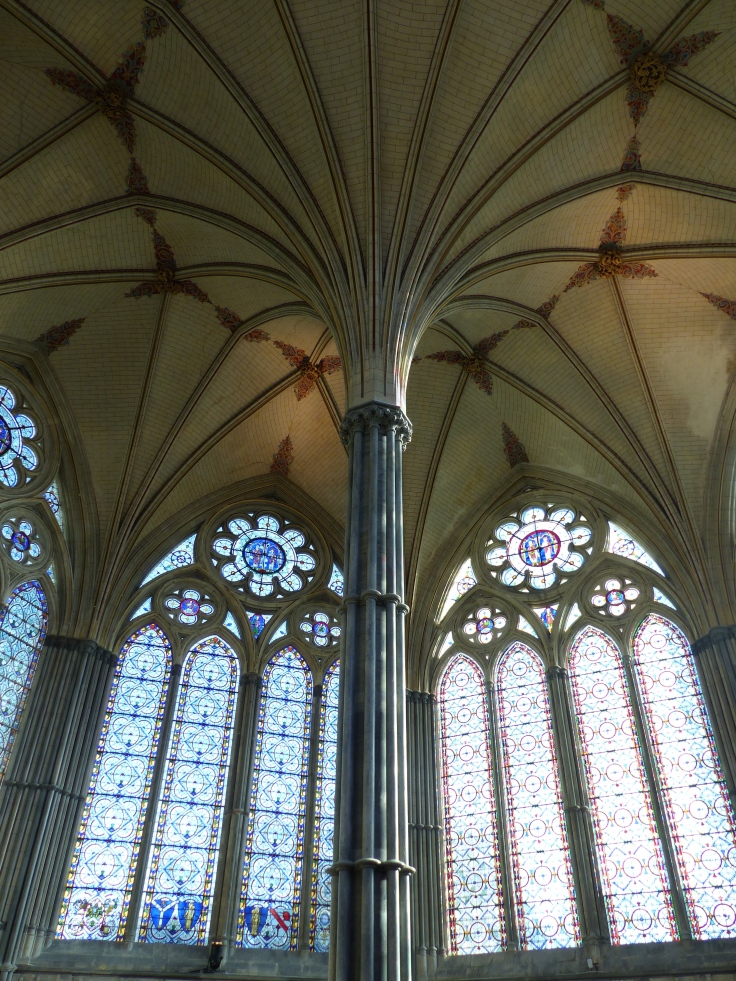 After leaving Salisbury, we took another trip through part of the New Forest to see some towns and villages we hadn’t been to last time. Steve is back to his countdown, “1 – 2 – …” as he holds up his fingers and I’m back to my regular exclamations of delight, “I just love it!” The scenery was beautiful, travelling under the trees and beside the stone walls, past the cottages and then into the New Forest National Park, with the wild ponies roaming freely. It’s so special and so beautiful and I just love it, really, genuinely, just love it! 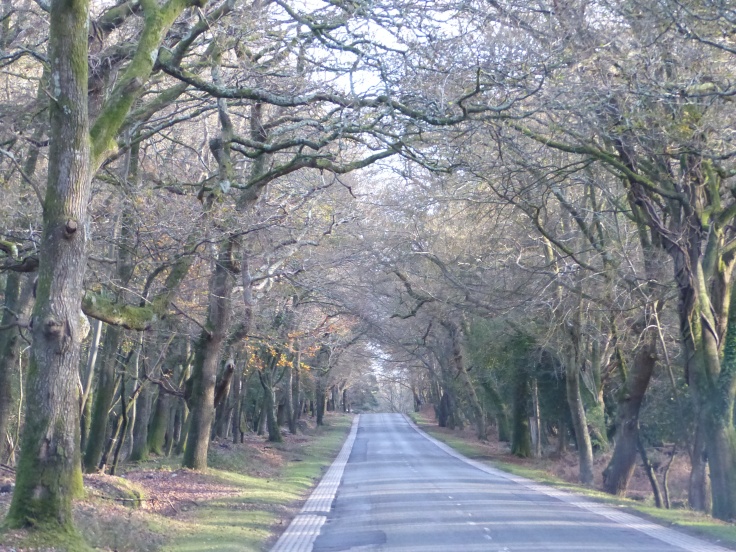 When we stopped for a walk around the village of Fordingbridge, I think it had actually become colder. “I’ve officially lost feeling in my feet!” I announced. Yep, despite having big thick socks that advertised themselves as “stay hot socks”, there was nothing hot, or even remotely warm about my feet. They felt like solid blocks of ice! Still, they walked me around the lovely little village and the cold did nothing to dent my enjoyment of the whole gorgeous experience.

Next stop was Lyndhurst, where the ponies were again roaming around beside the town. They weren’t the only ones roaming. There they were again, the amazing, the indomitable, the inspiring English folk, out rambling! The car parks beside the walking paths were full to spilling over and out in that Arctic wind, were all the people in their coats and scarves and wellies, going for a winter walk in the countryside. There’s just no stopping them! I am full of admiration for them and vow and declare to adopt that spirit myself and embrace the great outdoors no matter what!

We ended the day in Southampton and what a marvellous day it was. It was absolutely freezing and I absolutely didn’t care and I absolutely loved every minute of it! Every cold, nose dripping, eye running, feet numbing, wind blown minute of it! I love it here. I love the people. I love the character. I love the beautiful countryside and villages. Today I even loved the cold, because it was another new experience, another touch of English identity and it was a clear, sunny day, that made it all so right somehow.

Oh, and the other thing we saw on telly this morning was…Sooty! Yes, Sooty is still on! The real Sooty, with a new and different person presenting the show, but the original Sooty. Not a twenty-first century animatronic, fancy schmancy, updated Sooty, but the original, plain, good ol’ ordinary hand puppet Sooty. The little puppet that just sits there on someone’s hand. How gorgeous! You have to love that!

A grand day…puppets, polite people, ponies…a pleasant, pleasing, peachy, perfect day! Well, it would have been really really perfect if we’d been cycling, but still…I love it! LOVE IT!