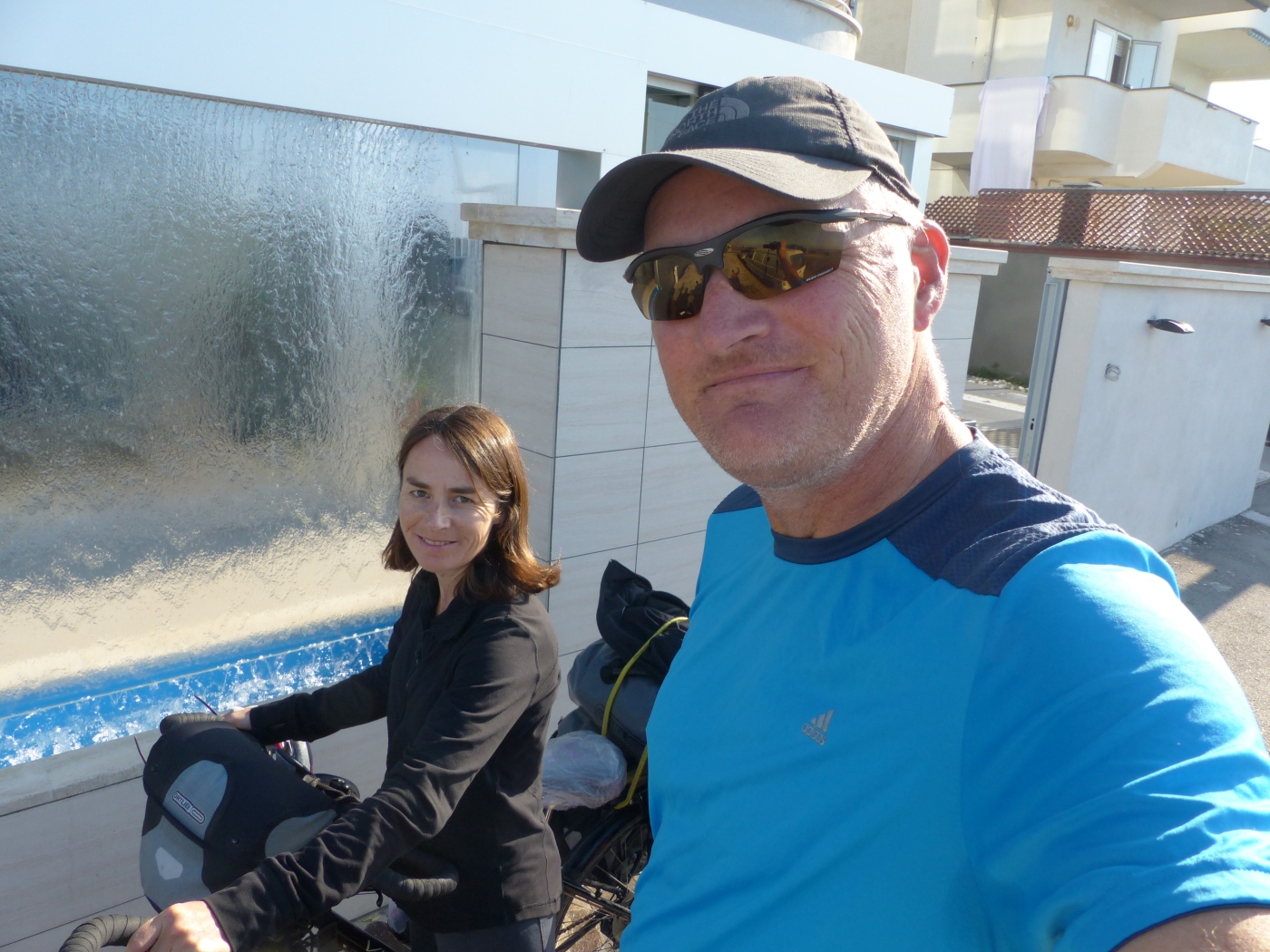 Are forty-five year old women allowed to have tantrums? That’s what I wanted to do today, I wanted to throw a full-on tanty and stamp my foot and pout and throw myself on the ground and kick my legs and pound my fists. I’m not happy. Moan alert…this post is going to have a few of them!

This morning we picked up the van; the van we’re driving back to London as a quick way of beating our visa deadline. We’re doing a relocation for the rental company, so we didn’t get a say in what the van was, we just took what they gave us, whichever one needed relocating back to London.  It’s a Wicked van and we’ve seen them around a lot in different countries, recognisable by the signature artwork, so that’s what we got.

It’s a tank. It rattles and grumbles and shudders. We took so many photos of it, to record all the dents, scratches, scrapes and chips that are on it and there are plenty of those! Then we checked everything under the bonnet. You know there are things to check when there’s a big red sticker on the dashboard saying “Check Oil Every 1000km”!! I didn’t want to get in that van. I want my bike. [pout and foot stamp]

I got in the van. I didn’t have a choice. The interior immediately made me put my antibacterial hand gel and wet wipes on stand by. It felt pretty grotty, so my germaphobic rescue kit was put in reach, for ready and continual access. [fist pound and leg kick]

We had to lie the bikes down in the back and pack our panniers around them. I don’t like the bikes being in that van. They don’t feel secure. This van feels like a six year old could break into it, even if they fell off the monkey bars and had their arm in plaster. They could still break into this rattle trap tin can. We’re going to lock the bikes together even when they’re inside. I don’t want the bikes in that van. [double foot stamp]

Steve settled into the driver’s seat, which he was feeling a little apprehensive about. Steve always does a champion job of driving in other countries and switching his brain to drive on the other side of the road, but this van was different. This van was a right-hand drive, so he has to drive a right-hand drive on the right side of the road. He was worried his brain would switch back when it shouldn’t and he’d forget which side of the road he should be on. I was in the passenger seat and my job was to look for traffic and warn Steve if he was drifting too close to the middle of the road, while handing him bread and honey as road-trip sustenance.

First stop was the petrol station, because of course this van that I don’t want to be in, had no petrol in it. Then off we went, driving that feral looking van. It feels like we’re driving around in mobile graffiti, so I guess we should at least blend in with our urban surroundings.

On we went and the passenger in the van was travelling along in extreme discomfort. I’ve run marathons and I’ve just cycled 7000km and my hamstrings seem to manage just fine. Put me in a van though, and within an hour, those hammies are screaming at me. Then my whole right leg started aching and my foot went numb. Then I began to lose feeling in my whole leg. Van seats are not made for people my size and leg length and they aren’t made for comfort, that’s for sure. So I wriggled and squirmed and moved my legs this way and that, to try and get feeling back. It didn’t work. I travelled in discomfort. I don’t like this van. I don’t want to be in this van. I want my bike. [frown, pout and foot stamp]

Second stop was a shopping centre to buy a Sat Nav, to help us find our way back to England and to assist Steve with navigating his way out of Italy, along the roads full of maniac drivers with a death wish. A Garmin was purchased and set up on the windscreen, with the soothing tones of “James” guiding us to “reach our destination”. We set off into the crazy traffic, the crazy traffic that we’ve tackled on two wheels and now have to try and tackle with four.

We cruised along the highway, following the coast and with “James” telling us to take this right, or that exit. At one point, Steve went to turn right, but realised he was turning at the wrong time, so merged back into the traffic. Next thing, I heard a car honk, then the car pulled alongside us and the man in the passenger seat held a police ID up to the window. Oh great! Another run in with the law! He stuck his hand out the window and gestured for us to follow, which we did, for ages, until they found a spot to pull over and we pulled over behind them. There began a quite bizarre exchange, that went something like this:

“Good evening,” began the police officer in the dark shades.

“You doing this.” (he made a swerving gesture with his hand)

“Passport please. We have problems with people in this area, so we checking.”

He looked at the passport.

“How long you in Italy? Where you heading? You not from England?”

We tried to explain what we were doing, but he cut us off…

“You have pistol in there? Gun?”

“No.” (It was actually hard not to say this, with a slightly bored tone, because that question was so unbelievably far removed from our world, that it seemed ridiculous to have to even answer it!)

“How much monies you got? How many U.S. dollars?”

“What’s that?” (pointing to Steve’s handlebar bag that was sitting between the seats) “Open please.” He then began rummaging through the bag, pulling out a bag of nuts and sniffing them, then a bag of loose change and sniffing that. Obviously he thought we were running drugs or something, as well as packing heat! “How many Australian dollars you got?”

“No pistol in there?”

“No pistol.” I thought, mate, you’re talking to a bloke that has a honey sandwich sitting on his lap, sitting beside a woman who was crunching on a bag of carrot sticks, I really don’t think we fit the profile of your usual pistol-packing pair!

He began looking through Steve’s wallet and of course, found some U.S. dollars that Steve had tucked into a side pocket, from our last trip to the States.

“I forgot it was there.”

“What other monies you got?”

We showed him our few left over Swiss Francs.

“We have problems here, with people bringing in bad money in this area, and guns.”

“Oh,” we both replied, trying to sound like we completely understood this situation, but we were definitely not of that ilk.

“What’s that? (pointing to my bag) Open please.”

I passed him the bag.

“Open please” (while saying this, he was opening it himself anyway.

All the while this was going on, we were trying to say we had bikes in the back and had been riding around, but we couldn’t get a word in between his rapid-fire requests to look at this or that or ask if we were the pistol carrying kind.

“No more monies? No other monies?”

He eventually seemed satisfied and sent us on our way, with a “Be careful driving, especially on this highway. Now to get back to where you were, go up here, turn right…” Then he got back into the car with his partner and off they went.

What an experience! I’m sure it was partly that feral van that had us pulled over. I’m sure it looks like the sort of van that would be driven by drug smuggling, pistol carrying weirdos and if we’d been in a nice, smart, normal looking vehicle, we probably would have been ignored! I don’t want to be in this van. I want my bike. He was a nice enough fella though, just very thorough and not inclined to wait for any sort of explanation from the people he happened to pull over. I went back to crunching carrots, Steve went back to following “James” and I handed him another honey sandwich. On we went.

It was starting to get dark, so I started looking up places to stay in the upcoming towns and we booked a hotel a short distance away. We didn’t make it too far today, since we couldn’t pick the van up until 10:00 and then by the time we packed it, stopped to get a Sat Nav and then stopped again for a routine, roadside interrogation, our forward progress was somewhat curtailed. So we made it to Grosseto, south of Pisa.

Tomorrow we have to get back into that van. We have a deadline to get it back to London in seven days. I wish we could get there tomorrow, so I could just get the hell out of that van. I know it’s just a means to an end, I know it’s just a quick way to get out of mainland Europe before our visa expires, but…I don’t want to be in that van. I want my bike. I WANT MY BIKE!!!! But…we have to do this road trip and I have to rein in my moans and just get it done. Hopefully we get there before a wheel falls off or a law enforcement officer decides to frisk us. “Sorry officer, no weapons here. Can I offer you a carrot stick? Honey sandwich perhaps? No Bonnie and Clyde packing heat here, just Big Steve and Heidi packing veg!”

2 thoughts on “I Waaaaant Myyyyy Biiiiiiike!!”