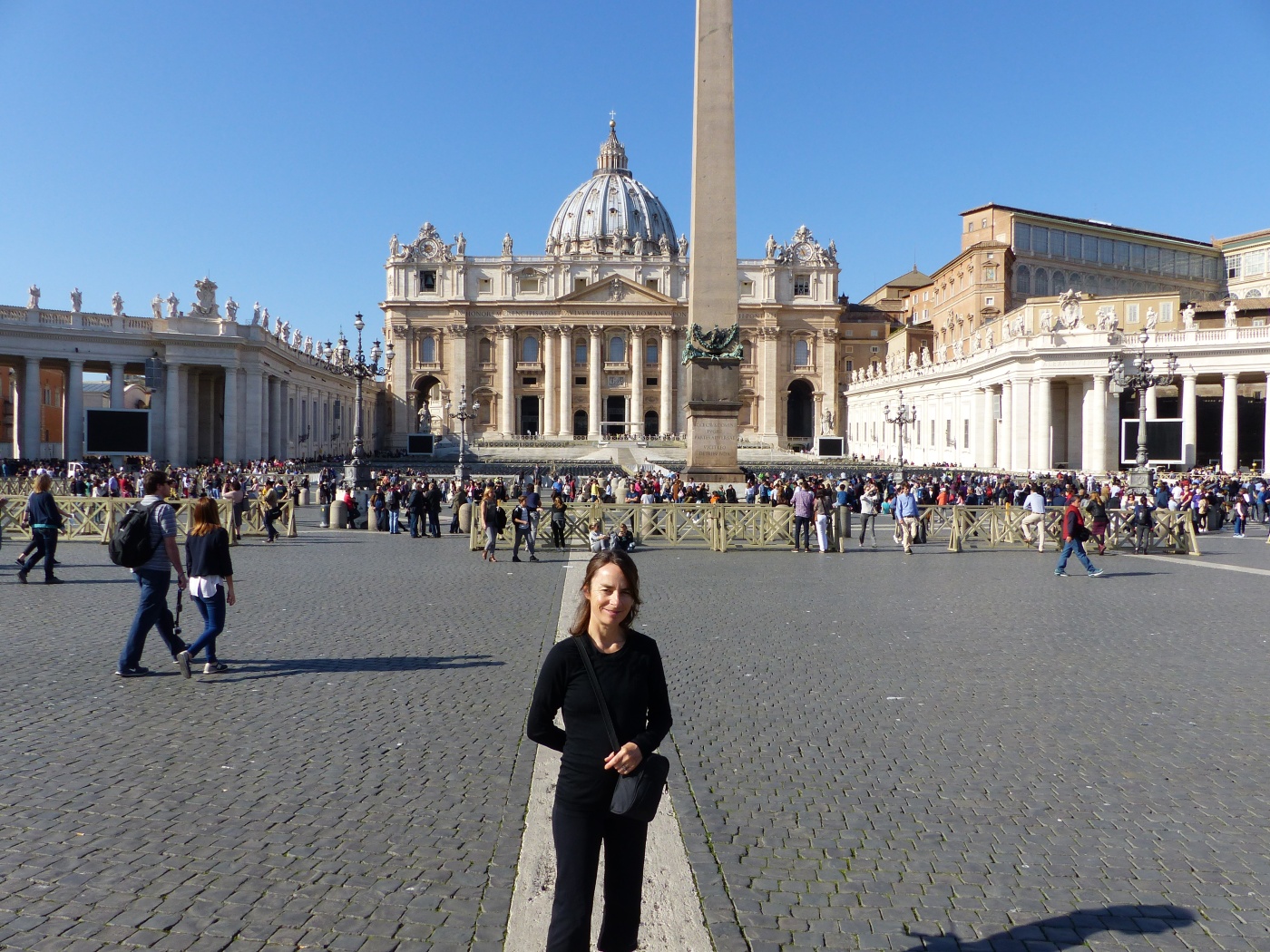 This will be a shortish post today, because I think the pictures can tell the story better than me.

Decisions, decisions, what to do first and where to go? In the end, we took the advice of the experts and followed travel writer, Rick Steves’ suggestion of the “Caesar Shuffle”. This would see us walking to the Pantheon, Forum and Colosseum.

What a glorious day for roaming, with the sun shining brightly to wrap us in a nice, cosy blanket that would keep us warm all day. We walked from our apartment, down the busy streets and into St. Peter’s Square, where St. Peter’s Basilica stood grandly at the head of this great open space, a symbol of power, a place of pilgrimage and something akin to the Papal Palace.

On we roamed, down the cobbled streets and lane ways, mingling with the masses. 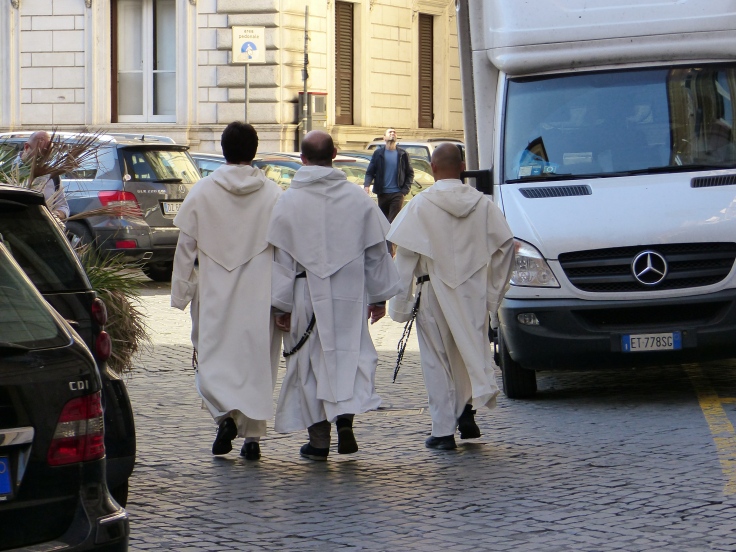 We found ourselves in Piazza Navona, one of the many open squares and we looked high and low and all around at the buildings and fountain and began to get a sense of the architecture and history of this city. It was also warm enough to shed a layer! How splendid!

The shuffle now officially began, when we reached The Pantheon. This is a temple built to all the Roman gods and all people were welcome to enter and worship the various gods, such as the god of bread making, the god of fruit trees and even the god of manure! No particular religion was a focus for this temple, until much later when Christianity took hold and a monotheism replaced pantheism. We had another connection moment here. The temple was originally built in 27 BC, but suffered a series of fires over the years and was rebuilt by Emperor Hadrian and he may have also had a hand in its design. We travelled along parts of Hadrian’s Wall in England, and here, in Rome, we were able to see another grand structure that Hadrian had built during his time in power.

The columns are actually one of the first examples of builders who failed to “measure twice, cut once”! They are all too short, with the columns being too low for the roof. The roofline above the triangular portico was abandoned mid-construction, when the columns arrived shorter than ordered!

The interior and the stunning dome, were quite breathtaking. It’s quite a testament to mathematical brilliance really. It’s exactly as high, as it is wide and the symmetry is quite amazing. The dome is made from concrete, a Roman invention and is 20 feet thick at the base, but at the top, it’s only 5 feet thick, to be lighter as it tapers. It’s also made from a mix of concrete and pumice at the top, to make it lighter. The square indentations in the dome are designed to reduce the weight of the dome, without compromising its strength. Kevin McCloud would be impressed, because it certainly is a Grand Design!

A funny thing happened on the way to The Forum (I had to get that in somehow didn’t I). We walked past the Trevi Fountain and, lo and behold, it was empty! We have this effect on significant sites involving water. When we were in Washington DC, we arrived at the Washington Monument to find the reflecting pool was empty. Now, here we are at the Trevi Fountain and what do we see…empty! It seems we can make water fall from the sky no problem at all, but once it’s on the ground, for aesthetic purposes, we can dry it up with our mere presence!

The Forum was really the heart of Rome. It’s where people gathered for social and business gatherings, where markets were held, and where the citizens of Rome, from the wealthy, to the prostitutes, would walk shoulder to shoulder. Walking through the ruins, we could form a 3D image in our minds of how it would have looked in its original state. It was such a huge, vast space, with such towering structures within it, that it was one thing to try and picture it complete, but quite another to just comprehend the sheer scale of the place. 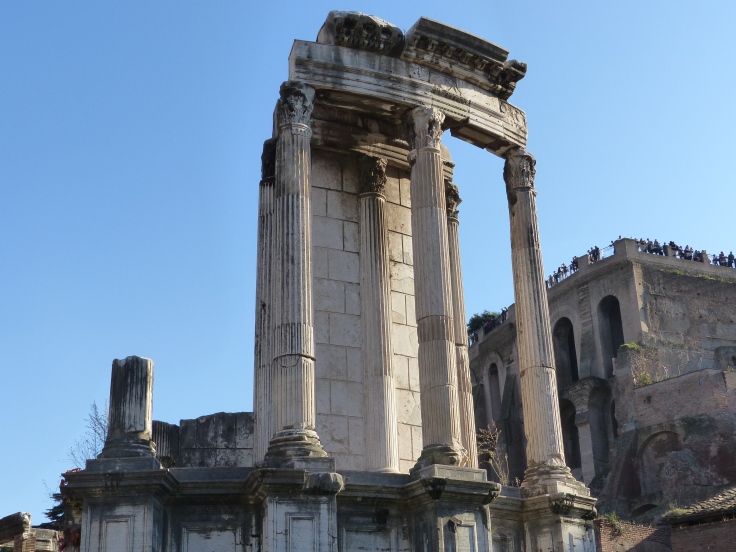 A short walk up the road and we were at the grand stadium itself, the Colosseum. The recognisable exterior could be seen from afar and as we neared it, and entered, I was again staggered by the enormity of these Roman buildings. Everything was constructed on such a huge scale. I guess when you want to proclaim your might and power, one way to do it is with the size of everything! Big, big and the bigger the better! Here, the mental imagery could see the slaves and animals caged in the underbelly of this arena, the crowds shouting and cheering in the seats and the gladiators doing battle in the arena. I can’t imagine what it would have been like, to step into that arena, look up at the thousands and thousands (it could seat 50,000) of faces, all waiting for you to win or die. Brutal.

With the sun now getting lower, it was time to start the long, long walk back to our apartment. We set off in sunshine and arrived in the dark, but along the way we saw St. Peter’s Basilica again in the twilight. Quite stunning.

So that’s all I’ll say about today. It was a terrific day of roaming, a very full day, with lots of work done by the feet, but oh my, to do it in that glorious Roman sunshine, was just sensational. We’re beginning to get our bearings here, beginning to get a feel for the stories and history and we have time on our hands to open many new chapters in this Roman saga of power and downfall. There’s no spoiler alert necessary, we already know the ending, but the story is a gripping one and most definitely worth walking our way through again and hearing this story repeated many times over. It’s another page turner, it’s epic and we’re here, walking the pages of history. How memorable. How special. How simply grand.