Farewell Firenze, time to move on, thanks for the memories.

We pedalled through the streets of Florence, heading out of town, mingling with the morning peak hour traffic. We’ve ridden on busy main roads many times, with trucks all but grazing our elbows and this is a regular cycling hazard. Today we had a new one – narrow cobbled streets and transit vans!  Those streets were barely a vehicle width wide and we were pedalling along them with our big fat panniers sticking out to the side, with vans trying to get past us. Some of them waited, some edged and nudged past and some just went for it and zoomed past our elbows. A cycling hazard unique to historic towns such as Florence! We made it through though and out on to the main roads. Then, with a right hand turn, we found ourselves on a lovely country lane, with high stone walls and it was quaint and charming and lovely.

The wind was blowing pretty hard and it was a chilly morning and before too long, Steve signalled to pull over.

“I’m freeeezing!” he said, as he began rummaging through a pannier for another layer. It was cold and that wind was adding to the chill factor for sure.

We rode through some lovely scenery, countryside and small towns. It was so nice to have some different views, with the hills and miles of green around us, as we rode through the valley.

The only thing about riding through a valley though, is at some point we’re going to have to climb out of the valley! Sure enough, those hills we were seeing around us, soon appeared before us. Time to start climbing. Up we went and that hill went on and on and on. It was one of those trickster hills, that winds and twists and just when you get to a corner and you think it’s about to level out, you go around the corner and just see more hill, more steep climbing and it just keeps going. The hill was a constant climb and then it got steeper right near the end and went up to a 14% gradient, just when we’re at our most knackered! I’d managed to climb without needing low gear, but then that steep final climb hit and down went the gears into low-low! I just concentrated on getting that pedal over the arc, so I could push it down and just keep the wheels moving, but it was a slow slog. That’s when the slow wobbles returned! Climbing that rascal of a hill slowed me right down and the wheels started wobbling and I started slow-swerving, as I just kept slogging and focusing on keeping the bike up and moving. It was a long climb! When we got near the top, we had a terrific view down to the town and across the hills, but boy did we work for that view! 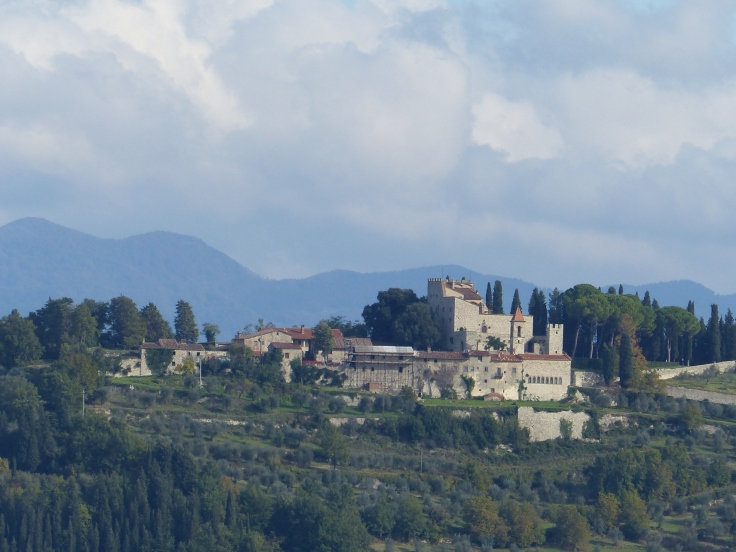 When we finally made it to the top, we found a spot to pull over for elevenses and sat on a stone wall near a winery that looked like a castle. The wind was sure blowing at the top of that hill and this is the real problem with hill climbing – slogging up the hill means I get hot and sweaty and then, when I stop and cool down and add to that, a fierce wind, I freeze from my ears to my toes and right through to the bone. Brrrrrr, was it a cold elevenses, even though the sun was shining. We prepared for some downhill and I added a vest as a windbreak against the cold wind-rush of the descent and off we went. Despite the vest, it still felt like I was sitting in a fridge inside a wind tunnel and it was a very chilly downhill run.

The nice scenery continued and we found ourselves in grape and olive country, with wineries, grape vines and olive trees around us and dotting the landscape. Thanks for the beautiful views Tuscany! We also rode through some more lovely little towns and villages. One in particular had a really steep street that we rode down. Boy, were our brakes squealing! I was just hoping those discs did their job and the brake pads held, as I edged my way down that slope.

We rolled into San Giovanni, found a park, sat at a table for lunch and began to do some research to find somewhere to stay. We’d just started eating when two little boys and a girl walked over and spoke to us. We apologised for not speaking Italian and one of the boys tapped the table, “We sit?” he asked.

Well, then the boy turned and shouted to some other people across the park, who then turned and walked towards us and stood by the table. There were now five children and three women standing beside us and one of the women said something, which we couldn’t understand and the little boy said something else and it soon became clear that it wasn’t the three children who had wanted to share our table, it was the whole family group that actually wanted the table! Well, a family of eight can use a table more than two cyclists, so I said, “We’ll go and you stay,” as I stood up and gestured towards the table for them to sit down.

“Grazie,” one of the ladies smiled.

We moved over to a bench and, as I sat down, a couple in the ground floor flat of a block of apartments that backed onto the park, gestured for Steve to go over. Steve went to see what they wanted and there began quite an exchange. It seemed this older couple were concerned that we, obvious tourists, had just been kicked off a table and this couple were about to leap to our defence! Then one of the women from the table group, walked over and rapidly said, “No, no, no, bambini Inglese.” to let them know that the children had spoken some English to ask us if they could have the table. It seemed it was becoming quite an issue! Steve managed to reassure everyone that all was OK, the lady and the little boy returned to the table, Steve walked back to our new bench with a smile and the older couple went inside, but stood by their door, just watching proceedings to make sure everything was in order! Neighbourhood Watch was in full effect! I looked over at the family group and they were enjoying a picnic together and one of the ladies had a plastic bowl, from which she took a lovely, tall, silver, Arabic style tea pot and began pouring small cups of tea around the group. She poured it in that style, from up high, so it ran in a long stream from the long spout on that special looking tea pot. It was nice to see them all sitting in the sun, having some time together.

We finished lunch, booked a room in a town ahead of us and then pedalled out of the park.

“Bye-bye,” came the voice of the little boy at the table.

“Ciao,” said one of the ladies.

“Ciao,” I returned with a wave. I hope they enjoyed their picnic at that hotly disputed table!

“Hello,” I heard the little boy add. He was obviously giving his English a work out! He still had better English than we have Italian!

On we went and the route on the GPS had us turn off the road and onto an unsealed path, through trees. It was nice to be riding through the greenery again, although it took some navigation around all the puddles and mud.

Then we came to a narrow footbridge, with the route telling us this was the way to go, so we needed to cross the bridge. There were steps up to the bridge, so between the two of us, we lifted each bike up the steps and onto the bride and walked across, only to find…What!?! The bridge led to scrubland! No path, nothing but just grass and shrubs and scrub! What is going on here! Clearly we couldn’t go any further, so we had to go back. The bridge was too narrow to turn around, so we edged the bikes back, in reverse, walking backwards along the bridge and then backwards down the steps. Back we went along the dirt path and back to the road. Plan B route!

We stayed on the road, which was a bit busy, then we turned off and headed along a quiet road, that went into a tiny town, where men were sitting outside a cafe drinking coffee under trees. The GPS was telling us to turn left…What!?! In front of us was a hill…a very steep hill…a very, very, very steep hill! The sort of hill that made me think we would topple backwards if we tried to ride up it, it was so steep. Steve simultaneously used a short expletive at the sight of that hill, while tapping on the GPS to find an alternative route that would let us avoid that beast! Plan C route!

On we went, along another road and eventually made it into our destination town, Terranuova Bracciolini. We found our accommodation and after a phone call to the owner, we were eventually met by a lovely lady who hadn’t received the booking, but was very apologetic and helpful nonetheless. She showed us inside, to what is a small duplex studio, with a small lounge on the ground floor and bedroom and bathroom on a mezzanine, which we have to ourselves. She was happy for the bikes to stay downstairs, so we’re all in here together, warm and comfortable.

We went for a stroll to look around and it’s a lovely little town, with quaint streets, small piazzas and the autumn colours of the trees, lining the paths. As we walked to the supermarket, a man in a motorised chair was talking to a lady across the street and he began talking to us and gesturing for us to go over. He kept talking to us, at which point we used our script again, “Mi dispiace, non parlo italiano”. He said something, that sounded like he was asking where we were from.

“Australia!” he beamed and continued talking to us, none of which we understood, until we heard him say, “molti italiani.”

“Yes,” we said, “many Italians in Australia!”

That man and lady chatted away to us and that’s something I love about so many of the Italian people we have met. It doesn’t matter that we can’t speak Italian and even when we say we can’t, they just keep right on talking to us anyway, whether we understand or not! So we had a nice chat to these two friendly people, all one way communication! We eventually farewelled each other with an “Arrivederci” and we went on our way and gathered our supplies.

We rode 63km today and had some tough hill climbs again. Like so many hills we’ve tackled over the months though, they have a habit of eventually ending! We eventually get up them. Just when we think we’re spent and the legs are burning, somehow, there’s that extra little drop of something in the tank and we manage to make it to the top. The prize was some lovely views and then the scenery continued with the green hills and trees and vines. It was a nice ride, even with the wind and the hills and with the speed wobbles making an appearance again! On we go tomorrow, to somewhere, we aren’t sure yet where we’ll end up. No doubt there’ll be some more climbing to do, so the legs will have to toughen up again. On we go, up we go, pedalling on, into a new day…the adventure continues!