The plan for today was to head closer to Florence, so with only a short ride ahead of us, albeit under grey skies again, we left a little later than usual and set off pedalling. We managed to keep out of the traffic most of the way, with cycle lanes on the road, or at least a shoulder beside the traffic. As we rode towards our destination, we were hoping Florence would give us the magic we’ve been missing in Italy, some lovely sights, some special moments, something to put some sparkle in our time here.

As we neared the city, it seemed things were getting off to a good start. We rode into a park that was absolutely lovely. It was a little like Florence’s answer to Central Park, with wide paths criss-crossing through the trees, an open air amphitheatre and walkers and runners appearing and disappearing through the trees and along the paths and trails. It was a picture of a place.

We stopped on a bench for elevenses, put on another layer against the chilly day and just sat and listened to the birds. We also swatted the mosquitos buzzing around us, but after suffering one new bite, I just squirted myself liberally with my miracle repellant and we continued to enjoy the tranquil setting. When we began to ride through the park on our way out, we saw people with their umbrellas up and coats on…it had started to get wet again! On went our trusty coats!

After leaving the peaceful park, it was time to hit the city. What would this be like? Well, for a start, we had a cycle path, so that was good, then we bumped along some shared paths, with the traffic whizzing beside us and the constant drone of motorbikes and motor scooters filling the air. I began to get a really good vibe about this place! I don’t like riding in cities, but every now and again we ride through one that feels fun. This was such a place! Riding into the city of Firenze felt like riding into Paris, I’m not sure why, maybe the bikes and motor scooters and the type of cycle path we were one, but it felt like riding in Paris, which I loved.  Riding into Florence just began to feel fun and it felt as if I was going to like this city.

We navigated our way to our accommodation, which we found down a fairly quiet street. We had booked a small apartment for a few days, and when we arrived, things continued to get better. We met the owner, Milco, who showed us through and we walked the bikes in off the street, along a corridor and then into a courtyard, with the apartments either side. When he took us into ours, I sighed and beamed!

“Is it alright?” Milco asked.

The little apartment was absolutely perfect. Milco had the heaters on in every room, it was cosy, nicely styled and spotlessly clean. We have our own, small, private courtyard out the back so we have somewhere to keep the bikes and it feels like a lovely place to settle for a few days in Florence. Milco even gave us a bottle of local wine as a welcome gift and after showing us around and explaining how to use various appliances, he left us to settle in. We made ourselves at home and enjoyed lunch sitting at a table again! There’s even a kettle! So I had two cups of tea out of a real cup, while sitting at the table. After lunch, Steve enjoyed lying down on the lounge, stretching out and digging into a bag of chips. All he needed was a beer and a footy game and he could have been back home! It was a lovely little moment of down time. Oh, we also have a washing machine! How civilised! So a load of laundry washed and slooshed, while we sat inside and planned what to do next. 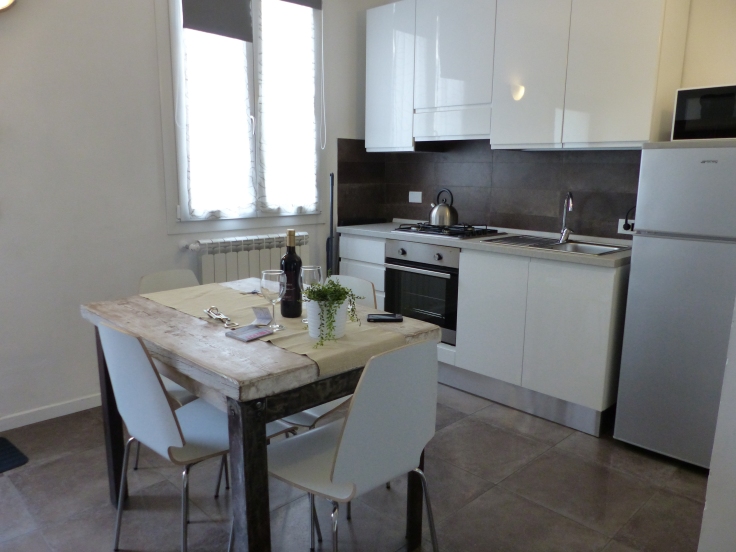 We decided to just head outside and roam for a while. We strolled down the streets with no idea where we were going, or where we were! We just walked. We found ourselves down by the river, so we followed that for a while.

Then we saw a group of people in the distance, on a bridge. So we headed that way to see what the attraction was.

As we neared it, I said to Steve, “Is that it? Is that the Ponte Vecchio?”

It seemed we had stumbled upon one of Florence’s “must see” sights, without realising it. I have to say, it was nothing like I expected it to be. I think I was expecting something quite grand and ornate and I don’t think it could be described as that. We actually commented that we liked the Pulteney Bridge in Bath better, and its design was based on the Ponte Vecchio and the Ponte di Rialto in Venice. I think our problem is that we have been travelling for so long now and seen so many different things in so many different places, that we immediately fall into comparisons, rather than just taking everything as we find it on its own merits. The result is we are probably more underwhelmed by some places that we should be amazed by! The Ponte Vecchio was still an interesting place and we didn’t actually cross the river, we decided to leave that for another day.

“I think we must be somewhere pretty touristy,” I commented.

We kept walking and then Steve added, “I think we’re at THE museum.”

Sure enough, as we kept walking we passed the Uffizi Gallery. Then we found ourselves in the Piazza della Signoria, a magnificent space with those stunning statues, the most famous, of course, being Michelangelo’s David. The one in the piazza isn’t the original, but it was a very spectacular place, with the most amazing statues. It seemed that we were just stumbling upon the famous locations in Florence, without realising where we were going and without a clue that they were there! Sometimes though, that’s the best way to discover things! 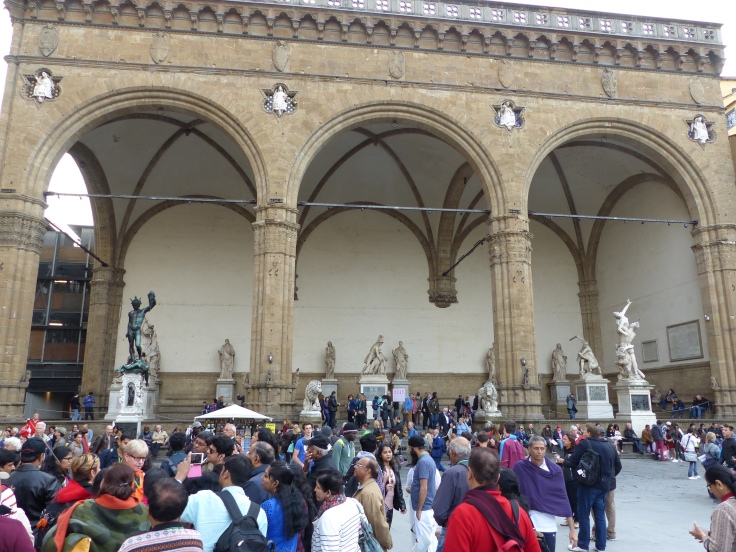 Then, after just coming across the Piazza della Signoria, the Uffizi Gallery and the Ponte Vecchio, we found ourselves in front of the Il Duomo di Firenze, Florence’s grand and beautiful main cathedral. Wow! What a stunning sight. This amazing building is made from marble tiles, with the tall tower overlooking the square and the spectacular dome at one end. We just stood and looked and gazed and marvelled at this stunning piece of architecture. 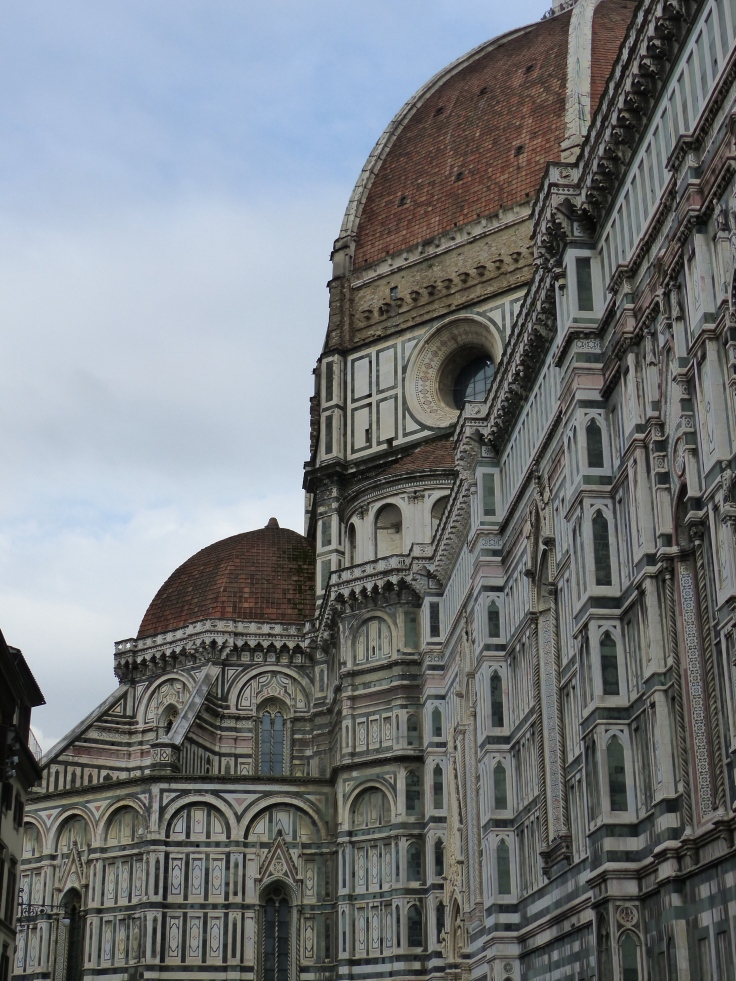 As we continued our roam through the streets, I commented, “I like this. I like Florence so far.”

It was a city that felt right. It felt like Paris. It was nice to walk through the wide streets with more pedestrians than cars and to see the narrow lanes off to the side, just waiting to be explored.

It was getting into the evening by this stage, so we decided to cut our roam short, having tasted some of what Florence has to offer, and save the rest for our full roaming days. We wandered back to our little apartment, then set off to the supermarket for supplies. When we returned, I made use of the kitchen. A kitchen again! With an oven and everything! I cooked a quick supper and we sat down at the table and enjoyed a nice meal, in a cosy little home, after an enjoyable day of riding and roaming, in a city that has so far given us a little magic. It was all completely splendid! Tomorrow we will continue the Florence experience and wander, roam and explore some more.

As much as we saw some spectacular and lovely sights today, I think the “Stunning Award” for the day has to go to Steve. As you would be aware, we are in a country that is known for its style and fashion. As you would also be aware, we of the limited wardrobe, that favours function before fashion, are often somewhat fashionably challenged. Today though, I think Steve turned a corner. Move over Karl Lagerfeld, vamoose Versace, Big Steve’s in town and setting design and style trends like no other! The highlight this season, and the signature design of the new Fall range, is this stylish ensemble from the menswear line of blue shirt, black shorts, brown socks and sandals. It will be seen on the runways of Milan, just you wait!

Then, to complete the look, we turn our attention to footwear.

Steve’s only pair of shoes (apart from his shower thongs) have been slowly falling apart. He’s tried sewing them, with no success, so today he turned to the gaffer tape to hold them together.

So here we have, to complete the image of style and supreme fashion wonderment, Steve’s gaffer taped sandals, stunningly set against the ever fashionable, brown sock.

He did ask me if his taped up sandals looked OK.

“They’re fine,” I said. “It looks like they’re supposed to be like that, like they have a stylish reflector patch on the side, that will shine at night.”

Sometimes you just have to say things to be kind. Sometimes, you just do!

4 thoughts on “Forward to Firenze”