Brrr, it was a bit chilly this morning as we rode out of Mirandola, but the blue sky was there, peeking through the clouds, just waiting for the sun to work its magic and burn that cloud off. We had some road riding to do today, but for the most part, the roads were nice and quiet and took us through the country. We passed many old, dilapidated buildings, many abandoned houses, with crumbling walls and sagging, collapsing roofs. The fields were being worked and we passed a house with a beautiful old lady, hunched over and filling a bucket with produce from her garden. She had a face with deep wrinkles that spoke of many years of toil and were the lines of a long life of stories. She wore a calico headscarf, thick woollen skirt and a cardigan that draped in folds down her small frame. It was a gorgeous picture, this small, elderly lady, gathering the results of all her hard work in the garden. She was beautiful.

Our nice quiet road soon became a busy one, so we stopped to look for an alternate route. A right turn and we were back on a quiet road that eventually led us to the cycle path we’d been waiting for. It started off as a nice, sealed path, which was great. We came across a bench beside the path, right in time for elevenses and just as the sun began to come out to play. Perfect! A seat and sun, the double bonus.

The sealed path soon became an unsealed one that had us bumping along a bank, dodging some rocks and holes and powering through thick gravel. It was still great, because that traffic was far, far away. Our pace slowed as we bounced along the bank, but it was so good to be riding in the sun and riding off road. The next 20km or so was the definition of uneventful…just pedalling along in the sun, bouncing and bumping and letting the day unfold around us.

A nice looking spot for lunch appeared, so we stopped and sat beside a river, in the sun and enjoyed lunch while we did some research for a place to stay. We still aren’t having much luck with campsites, so we had to opt for another hotel. I’m really quite over hotels. It will be good to be in an area where we have camping options. We knew we weren’t going to make it all the way to Verona today, so we found a place about half way and booked a room. Then we sat a little longer and just enjoyed the sun and the peace and quiet. It was lovely and we were reluctant to move! 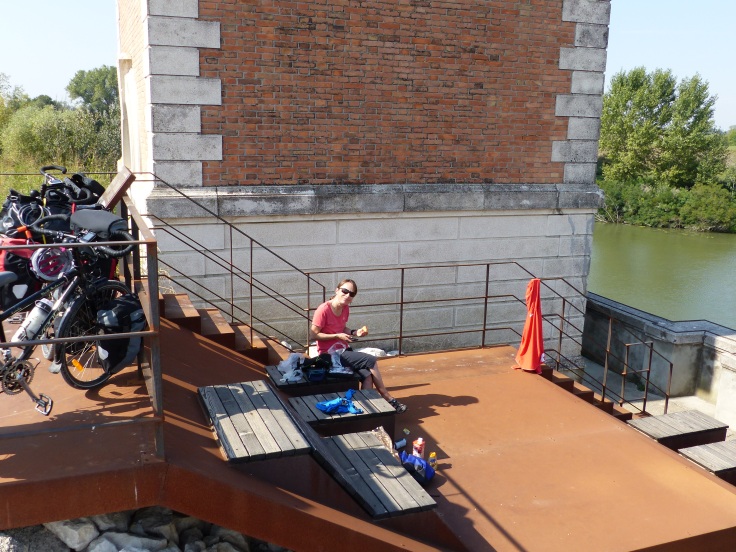 We finally dragged ourselves away from that nice little spot, got back on the bikes and pedalled off along our bumpy track. The track then threw in a couple of curve balls in the form of mud and puddles that went on for a few kilometres,  so we swerved and sloshed through some puddles and balanced and teetered along grooves and ruts. I did some swerving in that thick, sludgy mud, but managed to get through the obstacles with clean feet, so I was stoked with that.

The last part of the ride, before we hit the city, was through a forest trail, beside a river and that was one of the nicest rides we’ve had so far. It was only short, but it was lovely to be in amongst the trees.

We rolled into Mantova, our pit stop for the day and located our hotel after 58km of riding. Then began the dreaded routine, of unloading the bikes and carrying all of that load on our shoulders and in our arms, up stairs, in elevators and along narrow corridors. It’s heavy. It’s heavy on the bike and carrying six bags in one go, hanging off every side of me, is even heavier to carry. That’s why I like to camp – just ride up to the front door and unpack right there. No carrying like a pack horse. We lugged everything up to the second floor and dumped it in the room. We didn’t head off to roam, just walked down the street to gather the essentials, then back to the room to eat and do the necessary planning and organising. Just another day at the office.

Today was a really nice ride – the sun shone, the path was mostly out of traffic and we had some scenery. We hit the trifecta. I still don’t think we’re seeing the best of Italy and I’m looking forward to the days that don’t end in busy, noisy cities, but that just means there’s so much more out there waiting for us. Discoveries around the corner just waiting for us and we never know what we’ll find. That’s the joy of the ride!