Arrivederci Reggio nell’Emilia, time to move on. With panniers packed and bikes loaded we set off through the busy streets, under our first cloudy Italian sky. The road was busy yet again and we breathed a sigh of relief when a bike path presented itself and we were able to stay out of the traffic zooming past. In the cool morning air, we pedalled along the path, with the trucks roaring past us at a safe distance. I suddenly heard a very loud and assertive HONK-HONK. I looked to my left and there was a tractor, chugging along the highway beside us, towing a huge hopper. The driver had given us a loud toot on the horn and was now grinning and waving to us. We smiled and waved back, and that nice tractor man just kept right on smiling and waving as he chugged beside us and then kept waving as he passed us. What a lovely, lovely man! I couldn’t stop smiling. I think we’ve had at least one driver toot and wave to us, every day we’ve been riding in Italy. Gorgeous friendly people.

We continued wheeling along the path and saw an older man up ahead of us, walking towards us, so we began to slow down to ride past him. He stopped, turned side on to the path, so we could go by and then gave us the most enormous, cheery, toothless grin and waved both hands to us, while  calling out something that we couldn’t understand, but sounded very friendly and encouraging! It was a wonderful sight, to see this small, grey haired, whiskered man, smiling his beautiful gummy smile at us, with rapid waving and cheering. The day couldn’t have started much better and my smile couldn’t have been much wider. As we continued along the path we passed other people on bikes, commuting or just riding along and we received more smiles, to which I practised my “Buongiorno” in return. It was all terrific.

“This path should take us all the way into Rubiera, that’s another 4km,” said Steve, as we pedalled along, feeling very spoiled that we had been given a cycle path that had gone on for a few kilometres. The gong sounded…Steve had spoken too soon. No sooner had the words left his mouth, than the path ran out and it was back to the narrow edge of the busy road.

“Well that’s not an option,” he said. So we turned to Plan B. Steve had loaded a couple of possible routes onto the GPS, so with the prospect of another day on a busy road now presenting itself, it was time to try the alternate route. We reversed down the road and took a left turn, which brought us onto some quieter roads. Sigh of relief! We had some countryside beside us, so we pedalled along, until we had to stop so we could both put on some long sleeves! It was a bit chilly this morning!

We were on our way to Modena, somewhere I had wanted to go so I could see where all my balsamic vinegar comes from. It wasn’t too far from Reggio, so we entered the outskirts before too long. We stopped at a couple of places to search for a gas bottle, with no success, so continued on, having lost some time without gaining any gas. It was long past elevenses, so we searched for somewhere to stop and sit, which ended up being a gutter in a car park, and had a quick snack. We even forgot to take a photo of this grand and comfortable setting for our daily snack stop. With the wind a bit chilly and the sky a bit grey, it was time to get going, so we rode through the traffic and into the centre of Modena. As we entered the outskirts, it was clear we were in Ferrari territory. There were lots of flags and we passed a memorial to Enzo Ferrari and signs to the Ferrari factory and museum. I was somewhat disappointed that I didn’t see a little old lady driving a red Spider, on her way to get the groceries!

First impressions of the city were, this is a place that probably deserves some roaming time. The buildings were grand and historic, the streets quiet and cobbled and we happened to enter the city centre through the Piazza Grande, a UNESCO World Heritage listed site.

We found a bench, had some lunch and sat to think about what to do. After looking around us, we decided it would be nice to take some time to see Modena by foot, so we decided to stop the ride early, find somewhere to stay and have some roaming time. We found a cheap and cheerful hotel a couple of kilometres out of the city, booked a room and set off to check in.

Despite our last-minute booking, the hotel was happy to check us in and store the bikes inside, so we carted our gear up the little elevator again, dumped everything in the room, got changed and headed straight back out the door. We strolled into the city and had a lovely time just roaming the streets, looking at the buildings, walking amongst the locals and saying to each other, “We’re in Italy!” This is what we love to do, just roam and wander and stroll along the back streets and along quiet lane ways. There were no tourists (other than us!), so we just wandered where the locals wander and just became a part of the place. It was great. 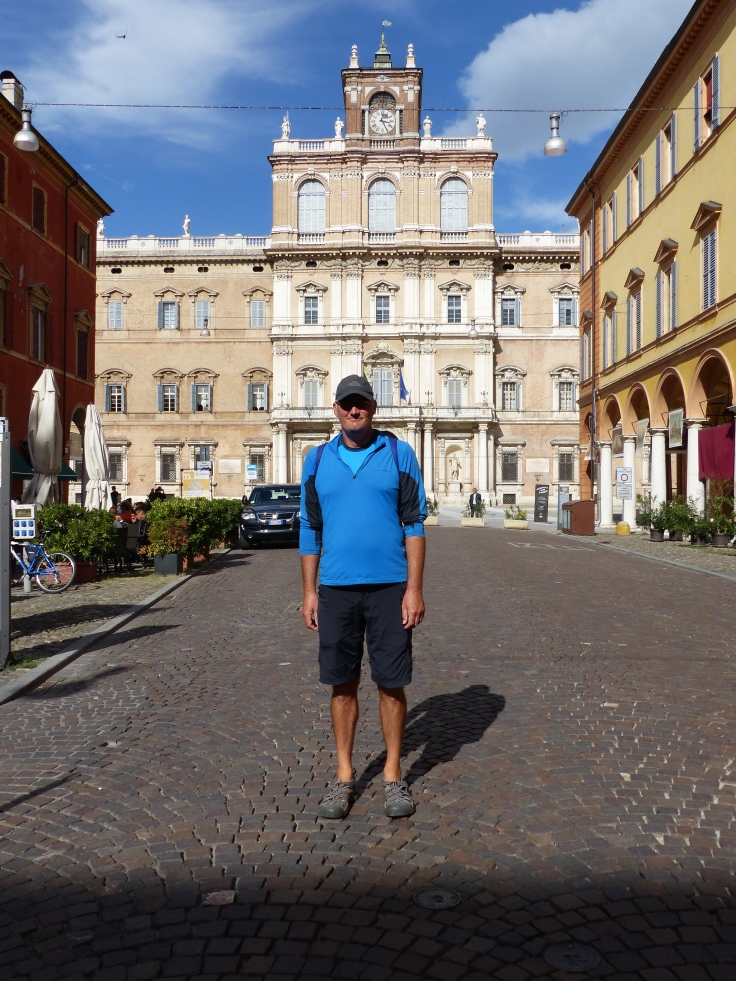 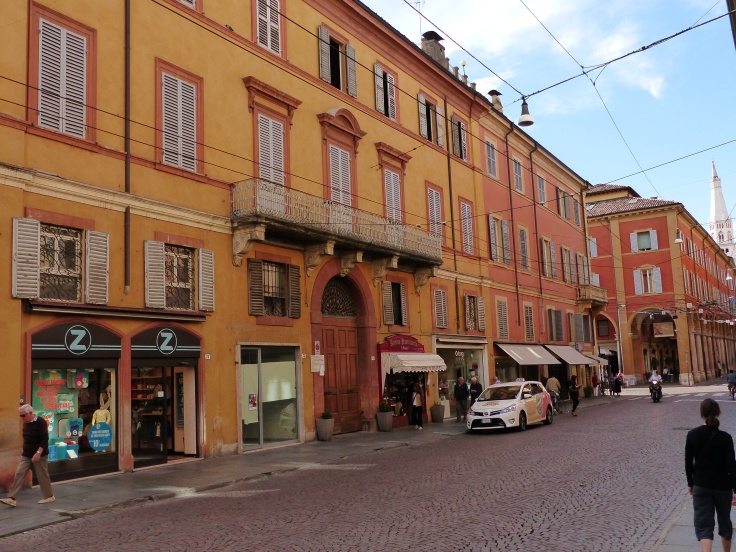 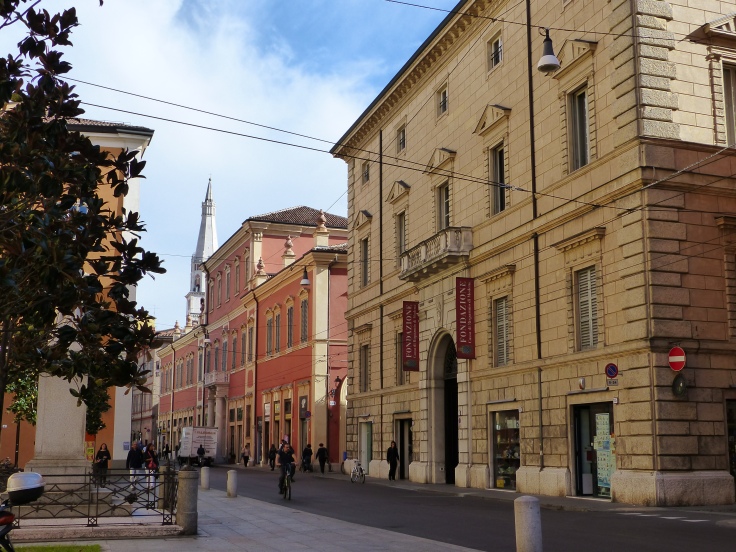 It was soon time to find supplies, so we walked a ways out of town to find a supermarket, which happened to be a hypermarket, one of the jumbo ones, so we power walked the acres of floor space, trying to find our bits and pieces for the night. It took an hour to find only a handful of things, but we got there in the end. We stood in line at the checkout and a kind faced, silver haired gentleman stood behind us. He began chatting away in Italian and smiling at us and even though I couldn’t understand his words, I think I understood what he was saying. He looked at Steve and made a wide space with his hands, then looked at me and made a gesture with his fingers, of bringing them together to make a small space between them. He laughed and I laughed, because I gathered he was referring to the difference in our height. I thought that was great, so I laughed, because he had made a very accurate observation, that we are indeed, the little ’n large show! He continued talking, at which point I had to resort to script and apologise, saying, “Mi dispiace Parlo Inglese.”

He nodded in understanding, then said, “Married?”

I tell you what, those experiences are still the highlights! I love it! These wonderful friendly people and time and again, I have found myself being spoken to or having these one-sided chats with people in shops here and it’s so lovely. I just wish I could be a little more friendly, by being able to chat back. I wish I had more language, because those people have been so friendly and all I can do is pick up the odd word or gesture to grasp a bit of the conversation and then use broken Italian and non-verbals to try and join in. I bumble along, because it’s so nice to be in a conversation with someone, I just wish I could be a bit chattier in return. We put our groceries through, packed them and as we were walking off, I turned to the nice man behind me and said, “Arrivederci” and then I walked off smiling again, having had another delightful encounter with a local.

It was a couple of kilometres walk back to the hotel and it was getting late, so we powered up the feet and set off. Our room has a small balcony, so we were able to fire up the Trangia, pretend we were camping and cook ourselves some outdoor supper. Grand.

It was a short riding day today, only 38km, but the earlier finish allowed us to see a lovely city. I also bought some balsamic vinegar, which of course I had to do in the home of this sublime liquid. We pedal on tomorrow, continuing to explore “The Boot” and see what more we can discover. It doesn’t matter where we go, or what we do, if we continue to meet people like those who have crossed our path so far, we will be happy travellers indeed. Like I’ve said before, it’s all about the people, the people maketh the place. Ciao Italy, we’re getting to know you and you’re making us smile! Grazie!