Now, I know I have nothing to complain about, I know I have things exceptionally good, I know I’m being very pathetic and “poor me” and I know this is most definitely a very trivial, “First World problem”, but…fair dinkum…I am about at my limit of roaming in the rain! I would really like to explore a place and take in all its sights and stories while being warm and dry, rather than being constantly cold and wet! Geneva turned on the tap today, so once again, we were roaming in the rain! The first things I saw when I looked out the window this morning were big puddles and lines of umbrellas. Oh beaudy, here we go again. 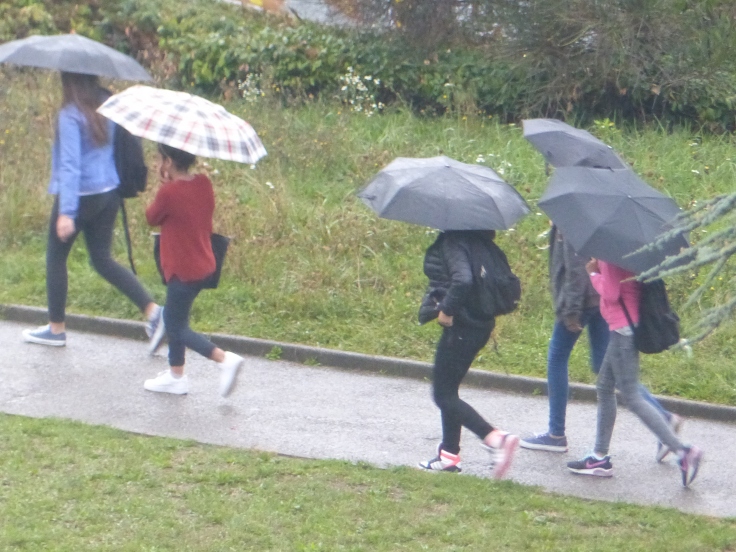 Off we trotted though, catching the bus into the city centre, where our first stop was the train station to book our tickets to Italy. We had planned to go to Turin, having found trains available online that would take bikes, with Plan B being to go to Milan, if for any reason Turin fell through at the last hurdle. Well, as it turned out, the very nice and very helpful lady at the ticket office couldn’t get the tickets to Milan or Turin on her system, so we had to go to Novara instead. This means two connections, with one only having twelve minutes between connections to get off one train, down a platform, along another platform and onto another train. I have to say I’m somewhat anxious about making that, so I’m gearing up for a stressful day of travel tomorrow.

Off we went, into the streets to make our way to the rendezvous point for the walking tour we’d planned to do. We had a quick elevenses under a bus shelter near our starting point, then our guide arrived and we were ready to tour. 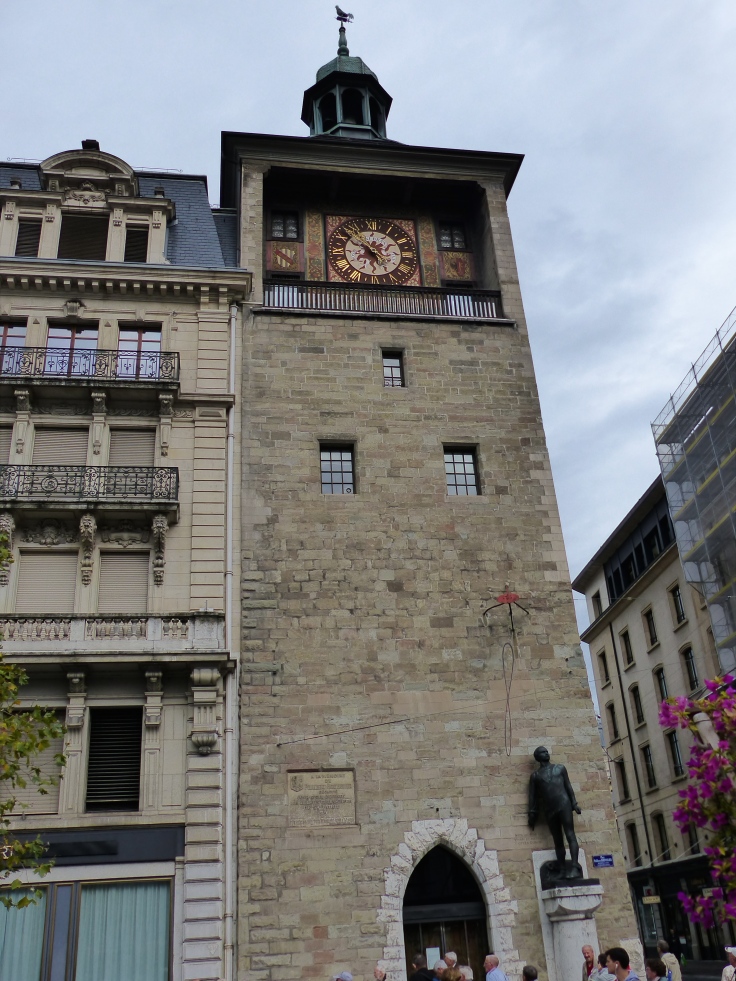 The rain started to come down now, so Ira was called into action and the umbrellas went up. It was forecast to be 27C today and it certainly wasn’t that or anything close to that and the rain had caught some other people in our group by surprise. I heard one lady say she’d checked the forecast and it had said it was going to be warm and dry, so she hadn’t dressed for wet weather at all. I gave her my umbrella and the tour guide gave his umbrella to another man who had also been caught out by the rain. Off our little group of international tourists from the U.S., Russia, Australia and the Philippines, trudged, behind Alex our very engaging and knowledgeable guide.

The tour was interesting and took us through the Old Town, which was lovely with its cobbled streets, narrow lanes and very French styled buildings. The buildings were all either grey or a dull beige, which is a sign from their time during the Calvinist era. John Calvin and the Protestant movement at the time promoted modesty and simplicity and the buildings reflect those beliefs. We walked through the streets, into a cathedral, past monuments and onto Lake Geneva. 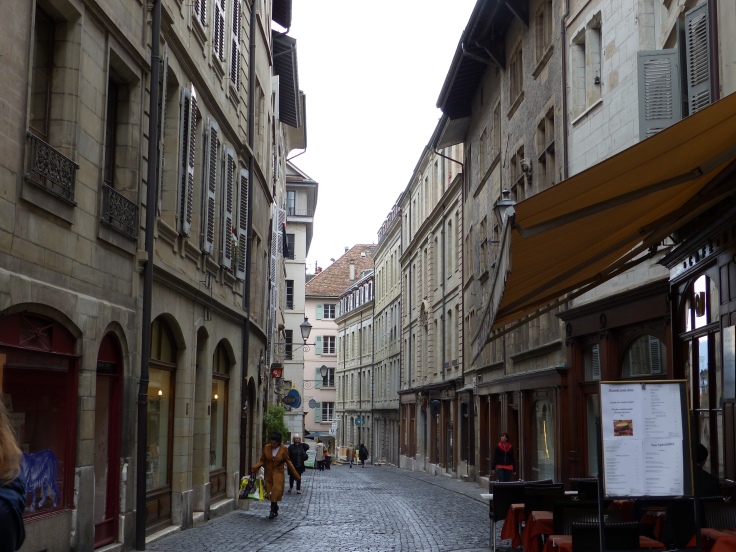 A fact that I thought was interesting, and quite unbelievable, was that women didn’t get the right to vote in Switzerland until 1972! In some areas, they didn’t have the vote at the local government level until 1992! As our guide pointed out, the Berlin Wall was down, but women still couldn’t vote in Switzerland. That’s something I certainly wasn’t aware of and it shocked me, that they had been that slow, to bring such a fundamental right into law. We saw a lot of flags hanging along the streets and our guide said that may make it appear as if Geneva is a very nationalist city, but that’s not the reason for the flags. He said Geneva is one of the most international cities in Europe and some places in Switzerland don’t even consider it to be part of Switzerland, so Geneva flies lots of Swiss flags as a reminder that they are, in fact, Swiss! Apparently Lausanne doesn’t consider Geneva to be part of Switzerland, so Geneva likes to fly some flags to remind everyone that they’re there and they are part of the country. The also had the EU flag flying too, even though they aren’t a member,  and are completely independent, but they flew it in the street anyway, just for good measure.

We saw where the Red Cross was formed and where the first Geneva Convention was signed and got a sense of the extraordinary history of this city and the enormous global impact that history has had.

As we walked beside our guide, he asked where we were from and then which part of Australia we were from.

“Oh, that is very rare!” he exclaimed. “We have many people from Australia come, but we have never had anyone from Tasmania! That is very unusual.”

So there you go, we were a rare breed in Geneva! That international, globally driven city, had a couple of rarities on their streets…the unique, rare, never sighted, Tasmanian tourist! We were happy to represent Tassie as a rare species!

After the tour, it was still raining, so we went looking for somewhere out of the rain to sit and have our lunch. The only viable option we found was…the train station! We had a cuppa in a coffee shop and covertly ate our contraband lunch out of our bags, then set off again for some solo, DIY roaming. The tram took us out to Nations, where we saw the United Nations building and the striking sculpture in the square. The UN in New York has the sculpture of the gun, with the knot tied in it and Geneva has The Broken Chair. This was created to urge countries to sign the Mine Ban Treaty and to honour the victims of land mines.  It is now also recognised as a symbol to invite countries to participate in the process to ban cluster munitions.

We walked through the square and laughed at the children having a marvellous time in the jets of water spraying up from the ground. A little girl was having a wonderful time chasing the jets of water and running around and through them, with pure joy on her face. One little boy ran through them constantly, almost standing on top of each one. His clothes were soaking wet and it was quite nice to see his mum standing by and letting it all happen, just letting her little boy have some good ol’ fun, running through the jets and jumping over them and having a grand time, while getting completely drenched!

In the same area, we walked over to the UNHCR building and then onto the UNICEF building. So many critical decisions have been made in such a small place. 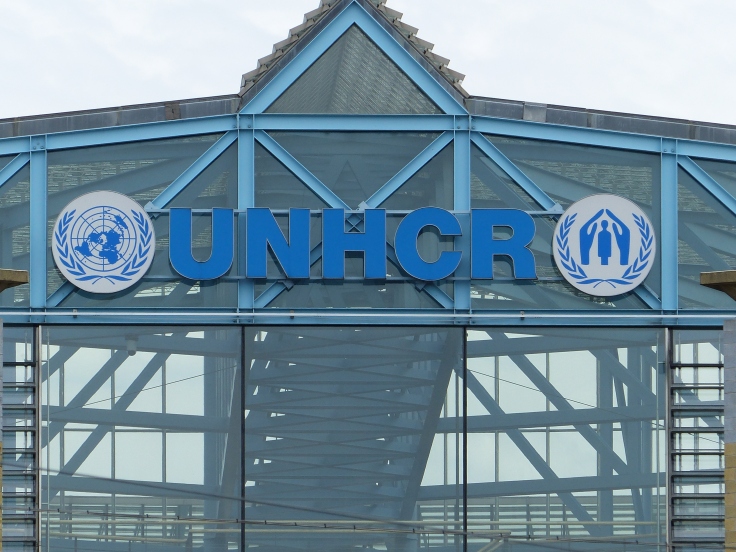 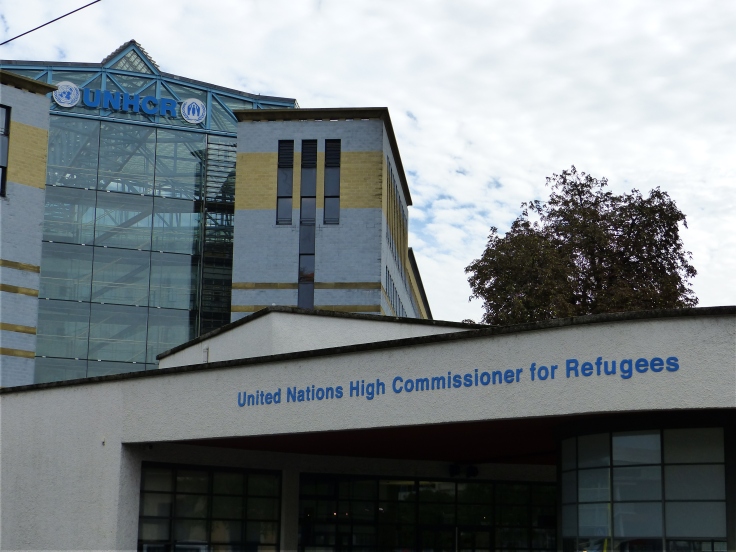 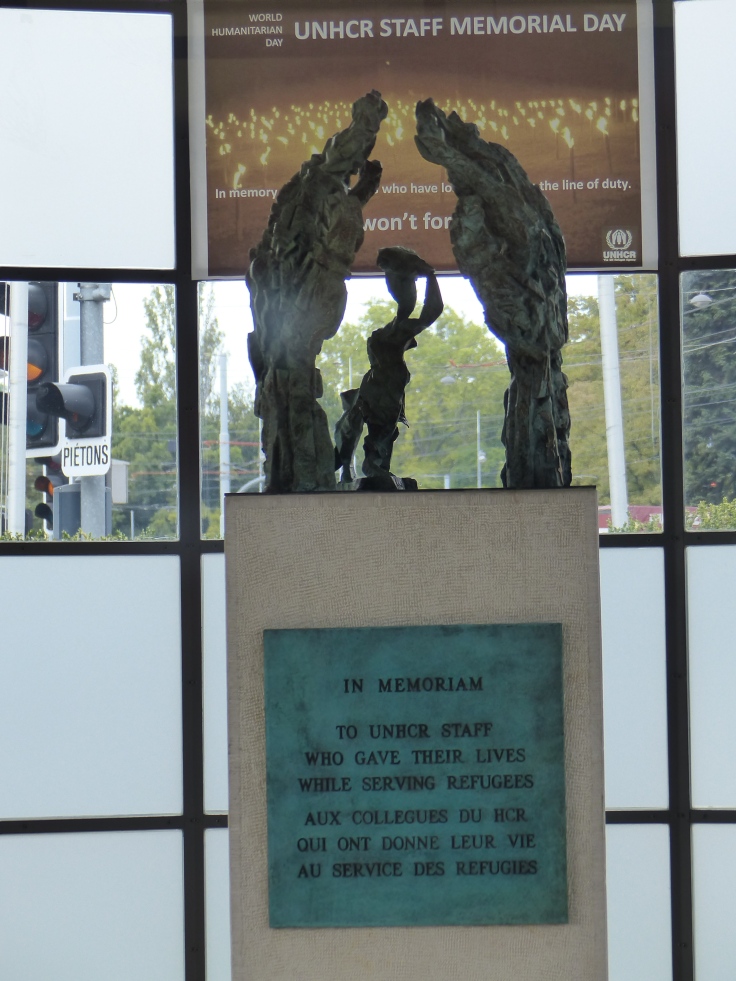 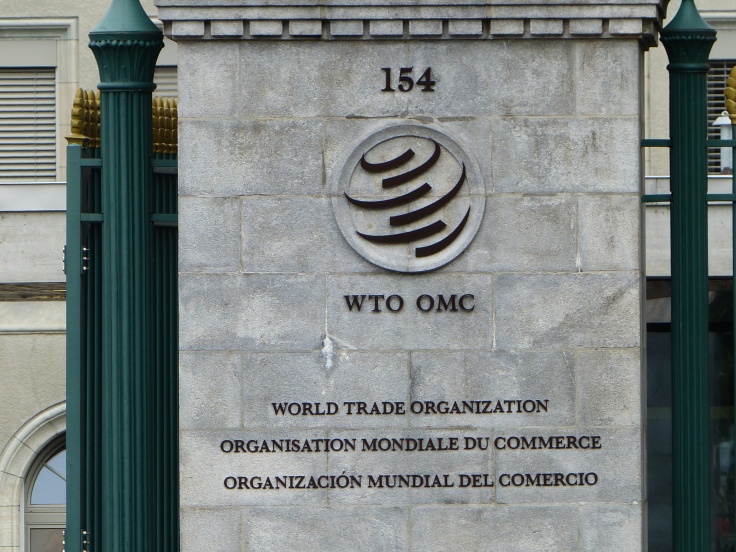 By 5:00pm the rain had stopped and the day was warming up, just as we started to head back to our hotel. Another day of roaming in the bag, another soggy city explored. Tomorrow we will tackle the traffic again to ride our way back to the station to take our train to Italy. I very, very much doubt we will have the smooth run tomorrow that we had on our way here. I’ll even be surprised if we make all our connections. We could end up staying at a train station in Switzerland or Italy! This is certainly an adventure we are on, sometimes so much so, we aren’t quite sure what the day will bring, or where or how it will end! Expect the unexpected…adapt and overcome! Tomorrow will be another of Forrest Gump’s boxes of chocolates…you never know what you’re going to get!

2 thoughts on “Rare Breeds in Geneva”