Today I was reacquainted with an old foe, that wily, wascally French wind! How did it know I was back in town!? Oh, it’s you again, I thought, I remember you, oh yes, how I remember you!!!

We had a very luxurious start to the day, with a leisurely breakfast and a morning cuppa while sitting on the couch…the couch!!! Then I entertained myself by unstacking the dishwasher…the dishwasher!!!! Oh, how such tasks were a chore a few months ago, but are now like an entertaining novelty, for their reminders of home life and domesticity! We eventually organised ourselves after I’d smiled a few times as I wiped a counter top here and a tap there and gave the oven a bit of a clean…just havin’ some fun! I can recommend a few months of life on the road, living in tents and hotel rooms, to help make those mundane and laborious chores seem like fun! Even cleaning the oven can put a smile on the dial!!

We left the bikes all cosy and dry in the little apartment and walked the few kilometres to the train station in the centre of Lille. We had two railway tasks today, one was to take a train to Armentieres to the grave of Steve’s great great uncle and the other was to buy tickets for our leap frogging. Yep, we’ve finally made a decision to do a jump by rail and seek some riding temperatures that at least start with a “2” instead of a “1” all the time! We have bought tickets to Geneva and then we will go on to Milan, from where we will ride our way around Italy. We had always thought we would need to get a train at some stage, to take us over the Alps, we’ve just decided to catch it a bit sooner and jump over the mountains and on to the Mediterranean, where so far the temperatures have been in the mid-twenties rather than the mid-teens, so we may get to ride in some warmer, finer weather…hopefully! Have we said that before!? Those words sound familiar? So far those plans haven’t played out, so we’re hoping Italy will break the weather jinx once and for all!!!! We booked our tickets to Geneva and then we’ll figure out from there how we get to Milan, or maybe even somewhere else in Italy, but for now we’ll be jumping over to Switzerland for a brief visit.

With the first task completed, we bought our tickets for Armentieres, then filled in a bit of time with an elevenses snack on a bench at the train station, before hopping on our train for the short ride out to the cemetery. We walked through the back streets of Armentiers and found the Military Cemetery, which is the last resting place for many soldiers from World War One. It was another peaceful place, perfectly and respectfully maintained and lined with those all too familiar white headstones. We have seen so many of them, so many lives lost. 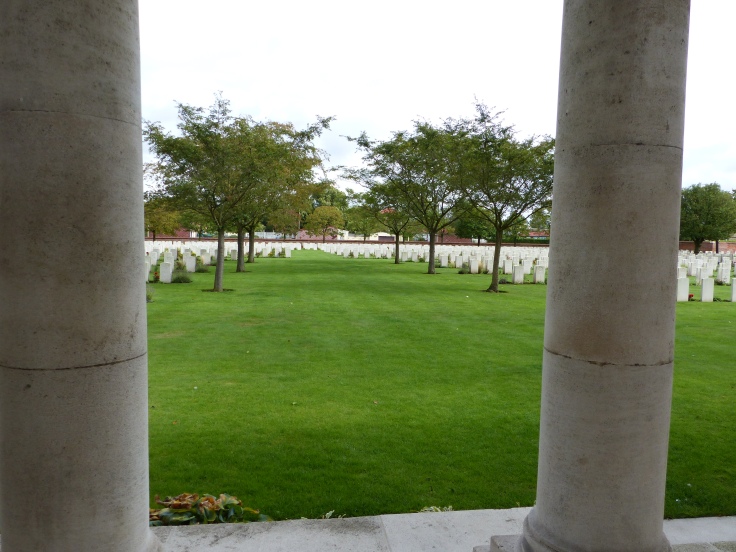 We found the grave of Steve’s relative, laid a pebble and said a few words to him and those around him.

One of the things I found really interesting about this particular War Cemetery, was it’s the first one we’ve been to that had German graves too. They weren’t in a dedicated section, there were German headstones standing side by side those of men from the allied countries. There were names from Britain, Australia and New Zealand and then, the recognisable German cross on the headstones around them. It’s the first time I’d seen that. Those who had once been enemies on the battlefield, were now resting side by side for eternity and in peace. All of them someone’s brother or father or son, none of them wanting to have experienced the fear and horrors of the battlefield and certainly none of them wanting to end up in this place of final rest, so soon and so young. Enemies at one time perhaps, differences to fight over perhaps, but not so different in many ways and here they were together. 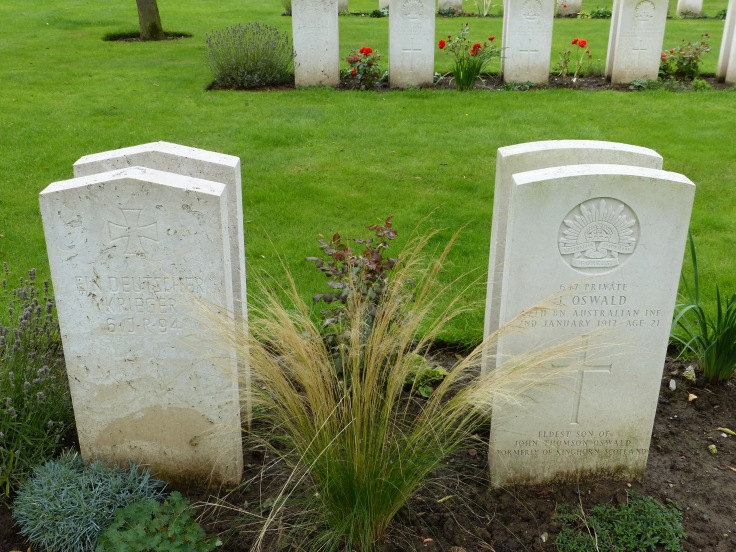 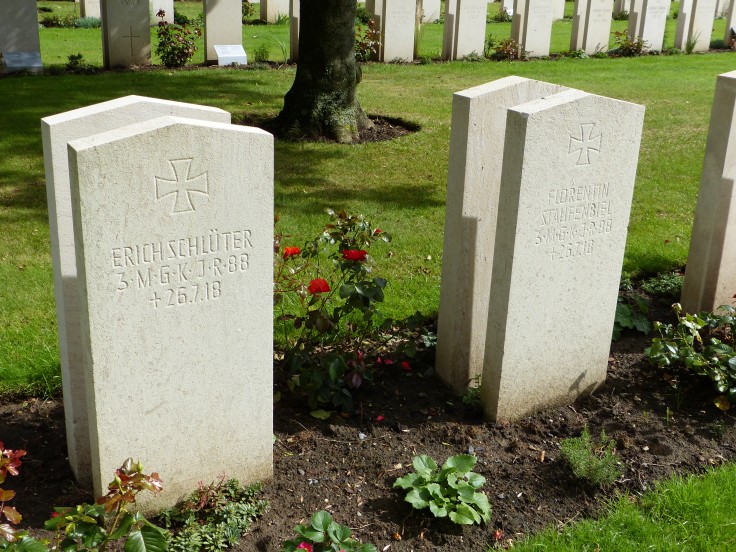 After a short stay at the cemetery, we walked back to the train station for the ride back to Lille. We had some steep steps to walk up and they were another reminder of that particular feature of French train stations, that I do not like! Today we could skip up them unencumbered, but very soon, we will be back to having to push and shove and haul our weighty, loaded bikes up all the stairs, amongst all the people…I’ll once again cocoon myself in my healthy state of denial until I have to actually go through that again tomorrow!

The rest of the afternoon was spent on some practical things and housekeeping, with a trip to the supermarket, a trip to the laverie to do the laundry and a trip to the post office. I went to a post office in the city centre to buy a box, so we could send home our dear departed camera, along with some small odds and ends. After returning to the apartment and packing the box, we walked down the street to our local post office to send it on its way. This is now the fourth time I’ve been in a French post office to try and send things home and I have to say, it’s a bit of a challenge. Each time I’ve done it, and each post office I’ve been to, I’ve been served by people who don’t speak English. Now, this is fine, I don’t expect them to speak English because this is France, I just really feel sorry for them, for the extra work they have trying to make sense of my gestures and broken French, as I try and communicate. They do a sterling job, as they try and explain things or answer my questions, I’m just sorry they have to face the extra challenge of dealing with the likes of me. For my part, I just do my best to blunder along and communicate the best I can, it just seems that it’s been in post offices where I’ve encountered the most challenging communication barriers.  It got done though, I filled out the necessary forms, was reassured by the friendly gentleman that the box did not need tape, at which point he did speak English for first time, to say, “Do not worry Madame.” Then the box was added to the trolley, waiting to wing its way to Oz. Thanks so much people of France, for once again showing your patience and helpfulness to the linguistically challenged!

Postal job now complete, we packed up the laundry and set off to ride a couple of kilometres to the laverie. As we rode along the street, that darn, pesky, bully-boy, pushy ol’ wind somehow knew I was back in town! It blew and blew and as I rode through intersections, it roared down the side streets like a wind tunnel, “Whoa,” I would say to myself, as the bike rocked and swerved with the pushes and shoves it was receiving from that wicked wind. I could actually smile today, because we weren’t riding far and I wasn’t on a fully laden bike, but that darn wind brought back some memories! I don’t know what it is about French wind, but boy-o-boy it packs a punch! As I rode along to the laverie, it was pushing and shoving and rocking the bike this way and that. “Ho, ho she’s back,” it must have been saying to itself, “we had a merry old time with this one last time. Let’s party!” So it partied like it was 1999 for the whole of our ride today, but at least it was only a short one.

We didn’t do a whole lot today, but everything we did added to the learning and enjoyment fund we have been accumulating. Fun little tasks in the novelty of a home, some learning in another setting from the Great War, some more immersion learning of a language and some fun and games with an old nemesis, who said hello again today in the form of some wild wind. Everything means something. Everything is important. It all adds to the chapters and continues the story and we’re richer for every moment of it. Now, I’ll just enjoy our final night in the comfy and cozy little apartment with its table and chairs and couch and kitchen and oven and….so many simple pleasures. Then I’ll psych myself up for another day of train travel, navigating stairs, leaping on and off trains, racing on and off the platform with bags and bikes before the train takes off…oh yes, I remember you too…I remember those games…Players ready? Play…