A day in Rotterdam meant a day being a local and getting on those bikes and riding like the wind! Or in the case of today…riding IN the wind! We took to the bike road and we whizzed and wheeled…zipped and zoomed…cruised and cornered as we flew around the city on our own little road. Very, very cool! We were back to fun city riding!

Along with the storm, there was super wind overnight, with gusts up to 90km/ph and today, while it wasn’t as wild as that, it was still blowing pretty strong. I pedalled and powered along, with the wind rocking me this way and that…pedal…zip…whizz…whoa, that was a big gust, hold on!…zoom…corner…woohoo, that nearly blew me sideways!...zip…fly… I flew along with the wind in my hair and my hair in my face, resulting in continual visual impairment. I am still not used to coping with hair that falls below my ears. I did not fling my hair back gracefully, like a blonde on a white horse galloping along a beach in a 1970’s Diet TAB commercial. No, I slapped at my face and tried to wipe that blowing hair out of my eyes, while whipping and whizzing one handed around the corners and along the streets of Rotterdam. I did not look graceful, I looked like a small, wobbly lady, riding one handed, with a slight lean against the wind, slapping and wiping at her face, in between resembling a modern day yeti with a curtain of hair over her face. Oh, I am such an ambassador for style! I tell you what though, it was FUN!

We had some jobs to do today, which were to find some maps and to sort out SIMS for our phones. As we rode towards the centre of Rotterdam, we stopped at a shopping mall to see if we could find some of the things on our list. No luck, it turned out this place was more like a huge indoor food market, so we wandered about for a while looking at the various stalls.

I saw something new there, that I hadn’t seen before – chip holders. One of the stalls was a frites vendor, selling fries in cones and their table had metal coils, so people could sit their cones of chips in them, rather than have to lay them flat on the table and have their chips fall out. How ingenious. I’d never seen that before. Steve bought some frites and tried out the little holders and his coiled chip holder worked a treat!

After the wandering, we set off again to continue our windy wheeling into the city centre. We returned to the underground car park and left the bikes in their multi-storey rack, while we went for a stroll to find the tourist information centre.

Rotterdam is a really easy city to walk around. We were expecting it to be quite busy and crowded, but it’s not at all and not too bustling or hectic, so we had an easy stroll through the streets.

We picked up a countrywide map, just so we could have a complete, at-a-glance picture of The Netherlands as a whole, to plot some possible routes to travel and explore, then popped into an electronics store to investigate some SIM cards. On our way to the information centre, we saw one of Rotterdam’s famous statues, the statue of Santa Claus. For reasons that are somewhat clear from the design though, it’s known by the locals as the ‘Buttplug Gnome’! I still can’t work out what he’s actually holding in his right hand, but whatever it is, it was amusing enough to the locals for them to rename the statue!

The wind and chilly air, along with the threatening rain, didn’t make for ideal picnic conditions, so instead we took our supermarket purchased lunch and sat in the train station to eat. Centraal Station is quite an architectural landmark in the city and has a really striking design, so we sat inside and looked around and watched the people coming and going. 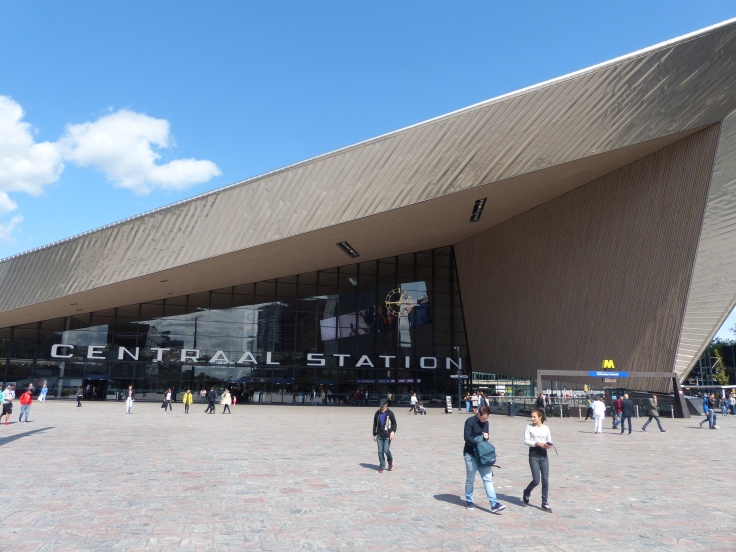 It was forecast to rain heavily very soon, so we decided to take to the bikes again and head back to the hotel, to beat the downpour. Off we went again, zooming and zipping along the bike road. There’s only one thing that’s just slightly disconcerting here and that’s that motor scooters are also allowed to use the bike lanes, so as we cycle along, we still have speeding motorised vehicles zipping past us at times. Apart from that though, it’s fantastic riding along on our little road.

We made it back to the hotel and then set off to walk to the nearby supermarket to gather the day’s supplies and to finally buy those SIM cards we’d decided on. As we walked out, the rain was coming down, so we power walked back to our room and again watched the sky go from grey to black and the rain pour down, as we were happy in the shelter of our room. I’m so sorry to all the people in all the places who have to put up with the lousy weather that comes along every time we’re around. Sorry people, we really don’t mean to do it, it just happens. Wherever we are, there will be rain and cold. Sorry!

I loved riding around today and I loved watching the other people on their bikes. Some people rode along holding an umbrella over their head in one hand, others rode along while texting, others talking on phones, one lady was holding a phone on her shoulder with her chin while riding along, one man was even riding a bike one handed while wheeling another bike beside him with his other hand. All done while riding at a cracking pace along the cycle lanes. This is a country of proficient pedallers!

We have begun to get our bearings here. We’ve done surprisingly well at remembering to ride on the other side of the road and we’re starting to pick up some language and reacquainting ourselves with using euros instead of pounds and pence. So all in all, we’re settling in OK. We’ll set off tomorrow to do some wider exploring and see some of the places suggested by Hank and Trui, who we met on the ferry. So we are off to find Dutch Discoveries, Navigate the Netherlands and Have a Hoot in Holland! With a zip and a zoom…away we go!