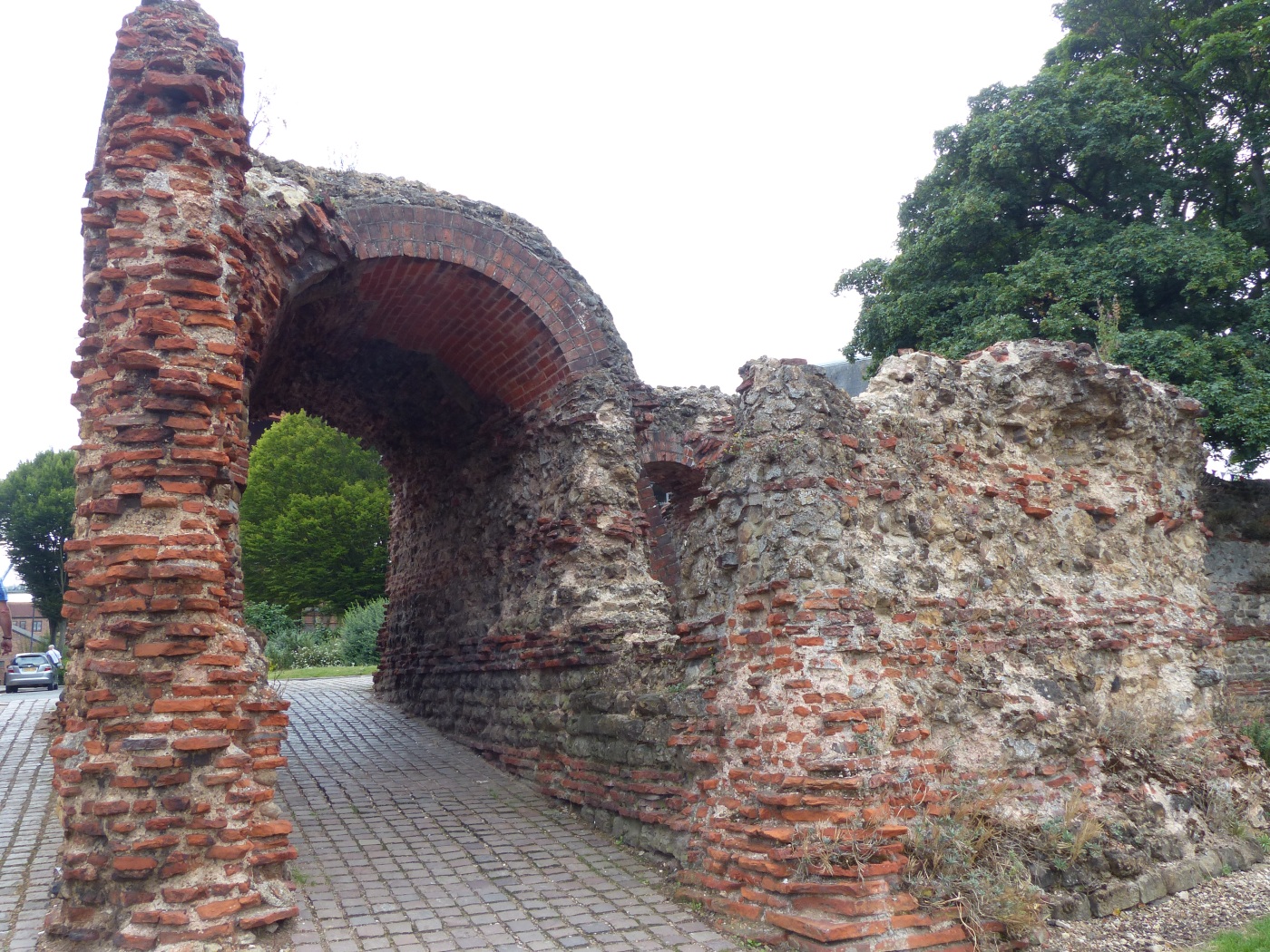 We nearly didn’t get out the door of the hotel this morning. Steve was very reluctant to leave, he was on the edge of his seat because there was drama aplenty! He just had to see what happened in the episode of The Waltons that had held us riveted this morning! Was it really Jim-Bob’s baby? Was Kathy trying to trap him into marriage? Mary-Ellen seemed to be on to her, will she discover the truth? Will it really be a “goodnight” for the Walton family tonight? Very reluctantly, Steve finally prised himself away from the TV, without ever finding out the ending to the drama on Walton’s Mountain. Oh dear. But…we were now on our way.

Into Colchester we went once again. As we entered the town from a new direction and by bike, rather than bus, we were able to see some sights we hadn’t seen during yesterday’s roaming. We passed by another piece of Roman history, in the form of the Balkerne Gate, the largest Roman gateway in Britain. It was built in 49AD to mark the foundation of Roman Colchester. In 60AD Boudica and her followers burnt Colcheter to the ground and as it was being rebuilt after this disaster, the Romans fortified the town by enclosing it within a stone wall. The arch was then incorporated into the new west gate, giving access to the main road to London. The origin of the word Balkerne, or why it was used to name the gate, is unknown.

Our onward pedalling took us into the High Street  and then through the parks and gardens again. We rode down a lane way that took us to Lower Castle Park, a section of the park we hadn’t seen yesterday. Here we saw the remains of Middle Mill Weir and I found it fascinating that a mill had stood on that site since the time of the Norman Conquest. I am still staggered by the age and history of the places we’ve been. As I stood looking at the Roman Arch, I looked closely at the stones and the trademark Roman red brick layers and just pondered the fact that they were touched by people from so long ago. I really can’t process that. The age of places and buildings and the fact they are still here and standing, is just incredible and I am constantly left with brain strain, just trying to comprehend the age of the historic monuments and sites we’ve been lucky enough to see.

On we went, leaving Colchester behind us, riding along cycle paths and greeting passers by, as we wheeled towards Wivenhoe. We had a nice flat start to the ride, along the river, which was terrific. After restocking supplies, the pantry panniers on the front of my bike had returned to their heavy best and I was feeling the extra weight on the bike.

It was a warm one today! I think it hit 23C, so it was a grand ride in the humid warmth. We caught sight of Wivenhoe through the trees alongside our path,  with its charming rows of houses lining the river and the boats in the foreground. Lovely. 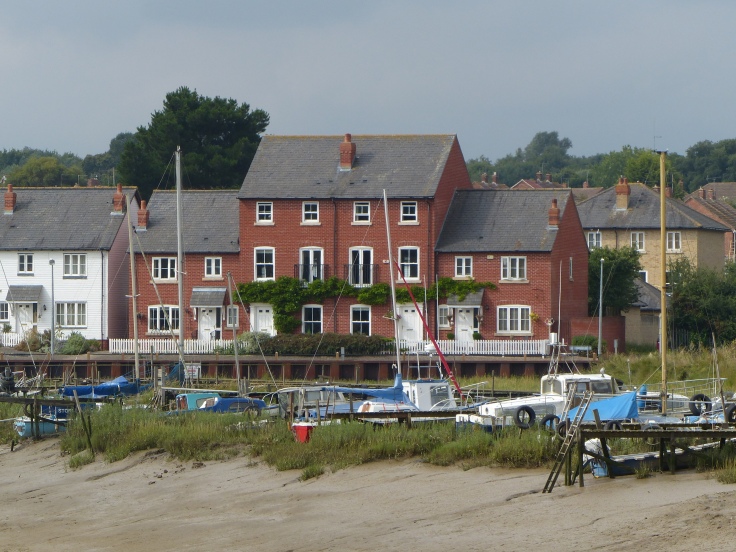 We continued to follow our route markers, through the suburban streets, past cottages and down lane ways. We stopped at a bench, just before we hit the main road, to have elevenses before continuing the final leg of today’s journey.

We were off our cycle path and back on roads, but pretty quiet roads and we had some sections of countryside and cottages again, which was so nice to see on our penultimate ride in England. Our final ride will just be the short ride to the ferry, so today could actually be classified as our final ride really, I suppose, so it was super nice to have some pretty scenery as a parting riding experience. I did have some “Love it” moments, so it was splendid.

We rode into the outskirts of Harwich and caught sight of the sea in the distance. The sea that will carry us away from Britain the Great. Sigh.

We pedalled into Harwich and caught sight of a cycle path on the other side of the road, which was near to our hotel. We just had to get to it. This gave us another parting riding experience…navigating a big, traffic filled roundabout. We entered the curve of this cycling nightmare and had to ride the full circumference, to get back to the path we needed. “I don’t want to be here, I don’t want to do this” I muttered repeatedly to myself as I followed Steve, with our arms outstretched, signalling. Now, I have written numerous times of my “upside down turtle on a unicycle” level of balance on the bike, so to ride the full 360 degrees of the roundabout, with a newly weighted bike, one handed, while signalling and turning the wheels in a constant right-hand turn and looking over my shoulder, behind me and every which way, looking for drivers who might ignore our presence and ride into us regardless, took supreme concentration! Round we went…round we went…round…round…turning…signalling…balancing…turning…round…round…round…traffic light. We stopped at the top of the circle again, halted by a red light and stood poised, ready to hit the pedals with a mighty effort to get across the traffic, off the road and onto that path. Red…red…red…flashing orange, so it’s about to turn…flashing orange…GREEN! GO!! Power to the pedals and we were off! Now we had to make a quick dash off the road, onto the path and hope there wasn’t a car too close behind us, not paying attention, ready to run up the back of us. Pedal…pedal…signal we’re going left off the road…signal…signal…turn! We made it! We were out of the roundabout and off the road. I had managed to stay on and had no encounters with dodgy drivers! Phew!

We wheeled up to the hotel and were able to check in, with the bikes in the room again. Perfect. Guess what Steve did within the first two minutes of entering the room? He turned on the TV, to check the channels and then gave an exclamation of disappointment when he discovered the channel that played The Waltons, was not one of those available here. Oh no! No Waltons! No Little House on the Prairie! Breakfast just won’t be the same!

We pedalled 45km today in wonderful warm weather, saw some more nice scenery and arrived at another friendly hotel. Tomorrow will be spent with some final roaming, some final housekeeping and some final planning and organisation. I don’t like that word ‘final’, it means we have to leave. Sad thoughts. But…there’s still some time left, so we will make the most of it and I will do my best to be the human sponge and just soak, soak, soak it all up, as much as I can, every last drop of experiences, moments, places and people in this glorious, wonderful, grand and splendid land. I’m ready and I won’t spill a drop!

2 thoughts on “Wheeling in the Warmth”