I set off in the dawn hours for another delightful and fun run along the lanes and the Cuckoo Trail. It was a such a gorgeous place to run and reminded me of home, where I run along country roads and watch the pink sunrise over the blue mountains. I had a pink sunrise this morning and it was beautiful. My early morning runs have made me miss my long runs at home though. I love setting off in the early hours and doing a two or three hour run through the countryside and along the beach front. Oh well, even if I am only able to squeeze in some shorter runs at the moment, some of the places I’ve been lucky enough to trot through, have been wonderful experiences.

We decided that tonight we would head for a hotel, partly to seek electricity to charge some devices and partly to give Steve some time in a space where he can stand up straight and not have to constantly stand bent over, which is his unavoidable position in the tent. I, of course, have no such problem, being the shorty that I am. We booked a cheap and cheerful hotel on the seafront at Eastbourne, so we were heading back to spend a bit more time in the place we briefly explored yesterday. The ride to Eastbourne was only going to be about 12km, so we again had an easy start to the day, took our time, had elevenses before we left, then packed up and pedalled off from our lovely paddock pitch. Ta-ta Peel House Farm, it’s been great.

Before we left, the clouds had arrived, the wind was blowing something fierce and the rain showers had arrived. As we rode into Eastbourne, the clouds remained, the wind blew stronger and the rain showers continued. It was cool and it was blowing and Ira the raincoat went on. I mentioned we rode some Portuguese/French hills to arrive in this part of the country, well today we rode through French wind! It was like being back on the hairy rides, being blown around by the mean ol’ wind. It was just a matter of putting the head down and pushing back!

We rode along the lane leading to the Cuckoo Trail and Steve was riding behind me, listening to The Ashes cricket on his radio. In the first kilometre I heard, “We’re 1 for 4!” then a short pedal up the road…”We’re 2 for…” and so it went, pedal a little way, then Steve shouting that yet another wicket had fallen. As we rode along the Cuckoo Trail Steve took over the lead, then I saw him holding up a hand in a stop signal. I slowed down, thinking he was pulling over. No, he was just holding up his hand to show five fingers. We were 5 for… as the wickets kept falling. So we pedalled into the wind and with the rain showering down in an on/off pattern, with  Steve giving non-verbal cricket updates. When he finally said we were all out for 60, my response…”I wish I could say I cared!”

We arrived in Eastbourne with time to kill before checking in, so went in search of lunch and a sheltered place to tuck in. I had found a small vegan takeaway shop during my online searches, so we headed there to gather lunch. I was given the task of going in and selecting our lunch items and what an amazing little place it was. I can highly recommend Oh My Goodness in Eastbourne, with a fantastic selection of food ranging from vegetable pies, pasties, stuffed sweet potato, salads and the list went on. Wonderful choice and all made fresh and all vegan. I selected our fare and then we headed for a park to seek a sheltered place to eat. We managed to find a spot under a glade of trees, out of the wind and sat on a bench to tuck in – a ratatouille pastie for Steve, a Cornish pastie for me and a brownie each for dessert. It was sensational! So tasty! The young woman who runs the shop makes everything at home and then brings it in and sells it in the shop and she’s clearly a brilliant cook. The shop has only been open since June, so I hope it thrives and she does well, because we need more places like this, as an alternative to the regular chain takeaway options out there. Steve has enjoyed his occasional vegan meal  on this trip and has commented on how much better he feels since he’s stopped eating dairy. He’ll never be a totally plant-based eater, but it’s nice that we can share some food that we can both eat and enjoy together. He’ll still tuck into his meat and roasts, but he’s eaten a lot less less meat since we’ve been travelling, partly by choice and partly by necessity when it’s been hard to cook and prepare things. It’s nice that he doesn’t feel deprived when he’s had a plant centred meal, because it means that there are times we can eat the same thing and enjoy it together. Today’s lunch was one such experience and it was great!

We still had a little bit of time before we could politely ask for an earlier check-in at the hotel, so still in need of some shelter, we rode the bikes across the grass to the park’s cafe. As we walked the bikes up to the cafe, a man stopped us to ask about the bikes and how far we’d come. “Not far today,” we said, “but all up, just over 4000km.” He thought that was amazing and told us about another man he’d met who had cycled from Sweden to Thailand to meet his father. I thought that was amazing! He was another lovely, friendly local and he wished us the best of luck and we continued on to the cafe. We parked the bikes outside and we sat and had a cuppa, to fill in a bit of time. We watched the people sitting, playing, running and walking through the park and again marvelled at the English people’s capacity to completely ignore inclement weather and enjoy the great outdoors regardless. People came and went into the cafe buying ice-cream and one man walked out, having bought ice creams for his three children. When they sat down at a table, the man said to the children, “I’s hot innit.” Steve and I looked at each other. “No!” we replied to ourselves. The temperature was about 17C with a wind chill of about 14C. It was blowing and showering and cool, but still, this man considered it hot. I saw this as yet another example of what wimps we are and how we feel the cold and how hardy the locals here are. Temperature is all relative!

We set off for the hotel and rode through some really nice back streets of Eastbourne. Hmmm, maybe this place has more to it than I thought. We were greeted warmly at the hotel, checked in and they were extremely accommodating of the bikes, finding them a perfect place under the stairs beside the lobby, where they will be warm, dry and secure. After settling in, we set off for some more exploring of Eastbourne and to get some errands done.

First stop was to find the outdoor store chain, where we could swap the wrong gas bottle we had for the Trangia, for one we could use. We found the Blacks store and here we experienced another wonderful person. Steve explained the situation with the gas bottle, what we needed, but sorry we no longer had the receipt. “That’s alright sir, I’m sure we can help,” assured the sales assistent, “we won’t be able to offer a refund, but we can do a swap.”

“That would be perfect,” we said.

He took us to the section, showed us what they had and asked if we would be happy with what was on offer, even though it meant we would need to pay a £2 difference.

“Would that be alright sir, would that suit you.”

We assured him this would be an excellent solution. Back at the till, he asked, “If I could just have your name sir, for the records, and your street number and postcode.” When we said we were Australian, he laughed at the difficulty he was having entering a foreign postcode into the system. Then we handed over our £2. “

I was doing everything I could to not make my smile reach completely idiotic proportions, because I was enjoying this delightful exchange so much. He asked if we were travelling or staying in the area and we told him what we were doing.

“Well, that sounds wonderful, what an amazing experience. I used to do a regular cycle tour in Scotland and I tottered along the north coast and then back to Inverness, but to do it for a whole year! I wish I could.”

He wished us well and as we were leaving the shop, I heard him turn to another member of staff and say, “A whole year, cycling around Europe…” When we got outside, I let my smile go to it’s full extent.

“Wasn’t he gorgeous!” I said to Steve. He was so helpful and so friendly and just all around lovely. Look after him Blacks Outdoor! He’s a keeper!

Time to do some roaming around Eastbourne. We walked the streets and what a surprise! Eastbourne grew on me very quickly, which I’ll admit, I hadn’t expected it to. There is so much more to the place than the seafront, the hotel strip and the pier. For a start we found The Old Town area. All the cities or towns we’ve visited that have had an Old Town section, have been amongst those we’ve liked most. Eastbourne put my incorrect assumptions and judgements of a seaside holiday destination, quickly and firmly back in their box! We found some lovely old streets, timber framed buildings and a real sense of history and story here. It was a super little roam and stroll around the back streets. Yes, we passed through the busy, bustling tourist strip with the souvenir shops and chain stores, but beyond this we found some real gems and delights. If I’ve learnt to expect the unexpected, then Eastbourne gave me the unexpected in the best possible way today. I warmed to it more and more as we roamed. I found myself exclaiming, “Pretty.” “That’s lovely.” “What a pretty street.” “I love those houses.” and other such statements of surprise and enjoyment. I hadn’t expected to use such descriptions here. How wrong I was. Very, very misguided in my assumptions about Eastbourne! Sorry Eastbourne, but you have given me some much needed education! 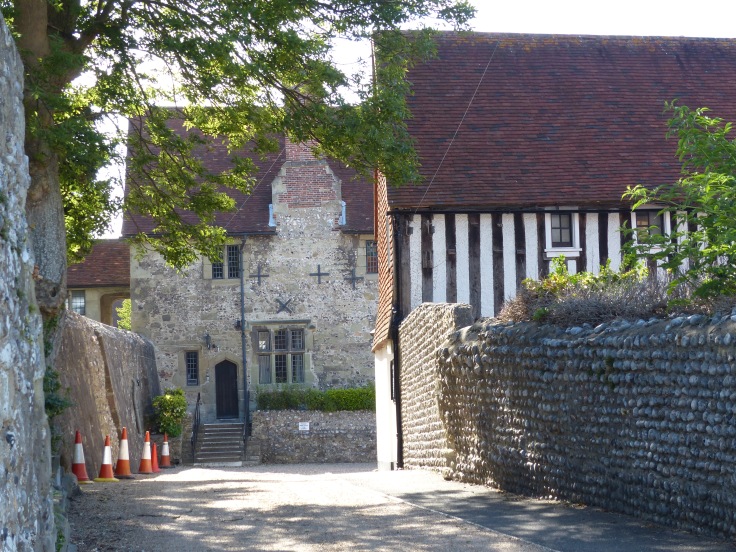 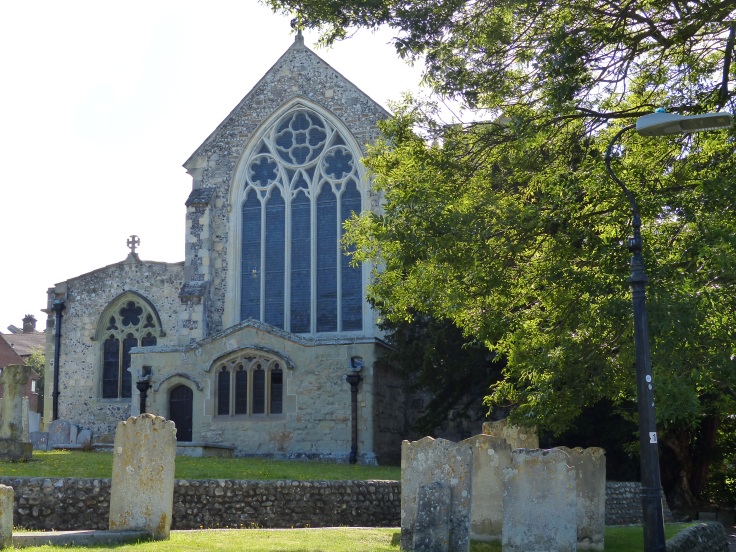 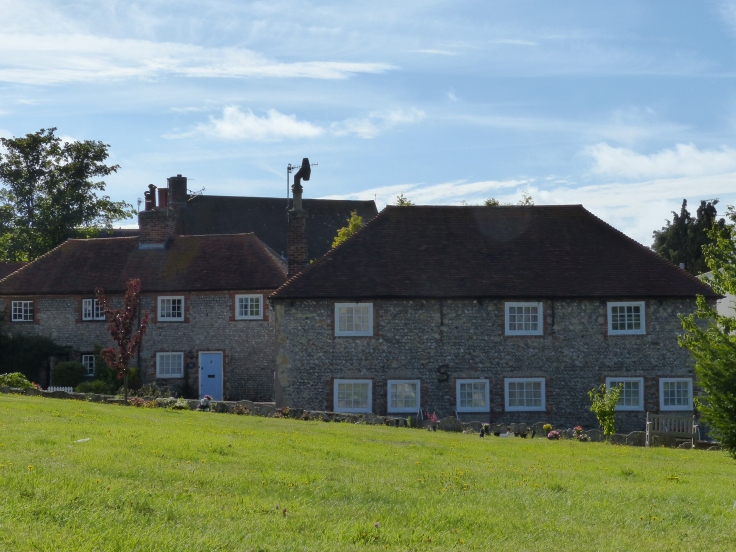 It was finally time to gather supplies for supper, which Marks and Spencer and Sainsbury’s successfully provided, then back to the hotel room to tuck into our salads, since lunch had been such a hearty and filling affair.

Another top day. A day of challenging weather again, but a day of surprises and gems. They just keep happening. I was so pleased to be proved wrong today, when I thought Eastbourne was going to be “just another seaside tourist trap.” There’s some of that, but so much more. I loved seeing the hidden gems of the town, I loved talking to friendly and helpful people and I loved finding another super and special little vegan eatery that supplied us with delicious food, that we could both enjoy and share. A brill day, just brill! The experiences we have, the discoveries we make, the gems we are given, well…”I’s just tops innit!”

4 thoughts on “I Do Like to Be Beside the Seaside”