That was today’s chorus! The plan for the day was to roam around Cambridge, a city I had envisioned as historic, cobbled, genteel and full of cyclists. The sun shone again! We’re on a roll! The wind was still there, but it’s so much more bearable when you aren’t facing it on a bike on the open road. We strolled into the city, beside the river with its narrow boats. We watched the rowers passing by and listened to the various coxswains calling out their instructions.

As we approached a park, we saw a sign that we felt somewhat responsible for, given our weather jinx powers. 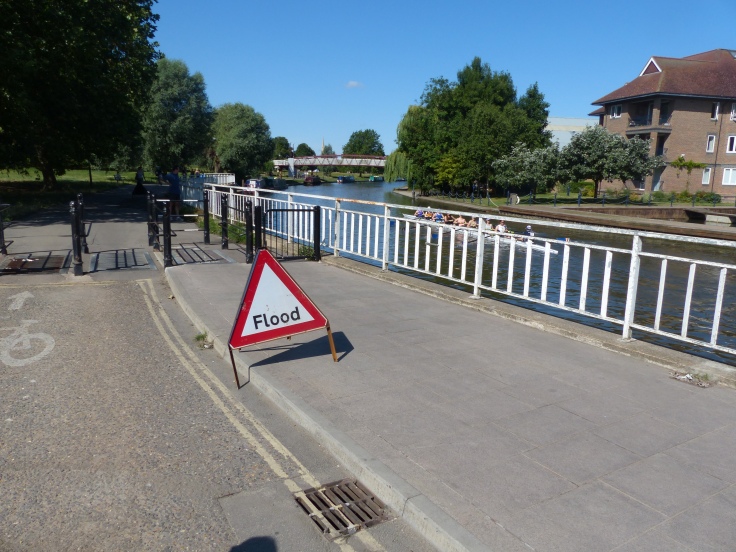 A couple of nights ago, when we were in the tent and it poured all night, along with a lightning show, that patch of weather caused flooding in Cambridge. There was no damage and it wasn’t serious, but the river did flood. It just seems that if we’re in the vicinity there’s going to be some sort of weather event!

There were quite a few people walking around in gowns too, so there must have been a graduation on and we walked past Kings College and saw the famous university.

We sought refuge in a coffee shop where we sat and had a cuppa to regroup and decide how much more roaming we planned to do. When we emerged once more into the flowing rapids of people, I think we both started hand flapping! We just couldn’t cope with the crowds! I found myself flapping my hands back and forth by my sides, trying to stay calm in this torrent of bodies and Steve was behind me saying, “I’m over these crowds, I need to be away from all these people. I can’t cope!” Trying to cross the street was crazy. We didn’t have to stop for a break in the traffic, we had to stop for a break in the river of people, that just kept flowing and flowing and we just had to try and make a dash for it, in between bodies!

We finally made our way to some back streets, alongside the physics college and library of the university and found some peace and quiet. We could actually walk along, without people around us and have a look at the buildings.

As we know, many eminent people have passed through the colleges of Cambridge. 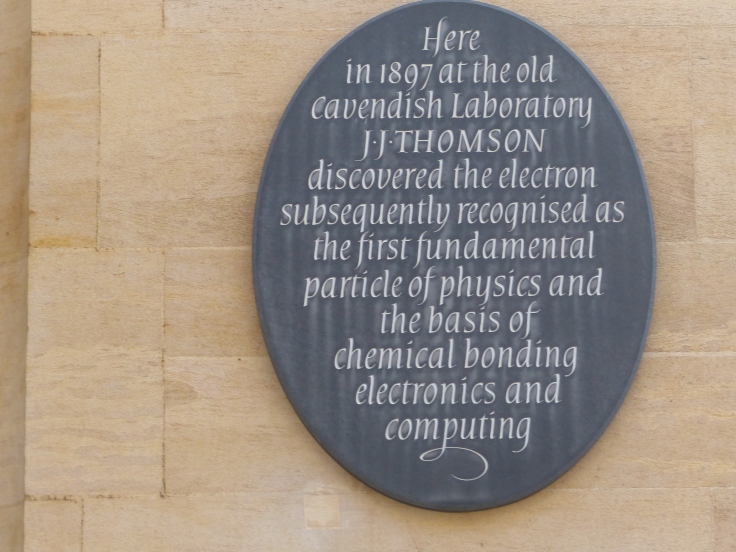 The work being done here today is obviously taken very seriously. The researchers do not want to be disturbed in their reading, writing of papers or potential scientific discoveries, not even for the postman!

We decided to find some picnic style food and head for a park with wide open spaces and grass, to find some respite from the crowds. We dodged and weaved our way back through the streets and along the river and found Jesus Green, where we found a patch of grass under a tree and sighed a sigh of calm! After a pleasant picnic, we continued strolling away from the city and found a cricket match going on at Parkers Piece, so we sat on a bench and watched the local teams battling it out on the field. It was quite a mixed bag of players, which was terrific. There was a little tacker, who only looked to be about ten years old, playing with the adults and he took a wicket! There was girl batting and a man fielding who had two prosthetic legs. It was a bit of fun to sit in the sun and watch the game. One of the things I want to do while we’re in England, is go to a village cricket game and sit with a picnic and watch a village cricket match. (Even though I have zero interest in cricket, it’s just one of those quintessentially English things I’d like to experience!) The game we watched today wasn’t quite that, but it was still a bit of fun and it was nice to be out of the crowds.

The afternoon was getting on, so we strolled back to our room to put our feet up for a while. It was an interesting day. Cambridge wasn’t what I expected. I’m sure it’s beautiful when you’re able to see it and move about freely, but we weren’t really able to do that today. Also, I don’t know if the garbage collectors were on strike, or just didn’t work on a Saturday, but there were overflowing rubbish bins and torn and piled garbage bags about the streets, which also didn’t show the city in the best light. I guess there was just a mismatch between expectations and experiences today. We still have tomorrow though. We have some plans for tomorrow and the weather is supposed to be good again, so we’ll continue to get to know Cambridge and see what tomorrow brings. We will experience this famous city, as we try and experience everything…with open eyes, open ears, open minds and open hearts and just…experience! That’s what life’s all about isn’t it…experiencing new things! We’ll see what we can add to our collection tomorrow.

4 thoughts on “Excuse me…Sorry…No thank you…”