And they’re off, the two cyclists have set off at a cracking pace, they take the bend, and they’re round the corner, ooh they’re slowing down, but no, they’ve regained momentum and they’re taking the hill, they’ve left the peloton behind them and they’re powering ahead. Oh, what a swift tactical manoeuvre to dodge the pram and…yes, the fox terrier has been dodged with a remarkable swerve…

It was a day of racing, cyclists versus the rain. Who was going to come out on top? Would the cyclists end the race wet or dry? Everything was set for the grudge match of the day!

Rain was forecast, so we left our lovely, friendly hotel after a breakfast provided by our hospitable host. When we arrived in the lounge this morning, the same nice lady showed us to a table, gave Steve the breakfast menu and turned to me and said, “It’s OK, I know what you’re having.” She took Steve’s order and then brought us our hot breakfast, presenting me with my “vegan special” which she had consulted me about yesterday. What service!

It was only light rain, so we hit the pedals and took off. As we waited at the road for a break in the traffic, an elderly man on a bike rode up.

“Yer look like yer goin’ further than me t’day.”

“Yes we are,” replied Steve.

“We’re heading towards Market Rasen, but it might depend on the weather.”

“Soom days, yer joost want ter turn ‘round and go back when the wind’s bad.The rain’s not s’bad, but the wind’s ‘orrible.”

I continued to nod vigorously!

With a break in the traffic, we said goodbye to this nice chatty man and turned the corner. As we rode along a street and began looking for our Route #1 marker, we saw the same man up the street.

“Yer took the long way round!”

“I thought if yer were goin’ ter Market Rasen, you’d gone the wrong way but I thought yer moost have joost been goin’ to a caffee. Yer want to be goin’ towards Caister. Have yer got a map?’

We stood beside him and brought up the map on the smartphone. He pulled his glasses out of his pocket, put them on and studied the device with interest. He began to name places and tell us the road to take and gave us a road by road, town by town, junction by junction, hill by hill description of where we needed to go, to get to Market Rasen. It was the absolute best start to the ride. I don’t know how many more examples I can continue to give of the wonderful, kind and helpful people we keep meeting. He took the time to stop and chat to us, then he took even more time to help us out and describe a route for us and set us off on the right road out of the town. He was the highlight of the day!

We followed his directions and came onto the road we needed, then set off up a hill to get out of town. The sky was grey and by the time we got to the top of the hill, the rain was becoming a little more threatening. I stopped to put on the waterproofs, while Steve stopped to check his bike.

“Something’s scraping!” he said with annoyance, and began shaking a mudguard here and checking a chain there. Steve does not like noises like that! He once sold a car he owned because it developed a rattle in the door that he couldn’t find and couldn’t get rid of. Steve couldn’t cope with that! The car had to go! (In Steve’s defence he did have the car for ten years, but the rattle eventually helped make the decision to sell that old faithful motor!) So now he was dealing with a scraping noise on the bike!

Now dressed in full slicks and Steve seeming to have solved the scraping problem, we continued on. The scenery was lovely again, with green fields as far as the eye could see. It wasn’t long before the light rain eased and the humidity forced us to stop again, so we could get out of our wet weather gear and cool off!

The grey sky was still there and we continued the race in an effort to beat the “heavy rain” that had been forecast to start shortly after the “light rain” that we’d experienced. After looking out at the beautiful green fields, we soon found ourselves riding through them. The route had again taken us off road, along a track through a paddock, but it was so much fun and such a lovely ride.

I don’t mind the bumps and the holes, because it’s so nice to ride through the countryside. The only occasional problem was being on the verge of the ol’ heart stopping! Those darn wood pigeons! The wood pigeons, those of the constant and repetitious “hoo…hoo…hoo” chorus, seemed to enjoy belting out of trees and hedges at a rate of knots and in a flurry of feathers, right in front of me! I’d be riding along peacefully, listening to a chirrup and a tweet from the little birds in the trees and looking out at the fields and all of a sudden a grey blur would shoot out of a tree with frantic flapping and leaves flying and boy-o-boy did it give me a fright every time! Cheeky things!

I loved just riding along and looking at the scenery and soon our route took us through trees beside a forest. As we rode through  the shadows of the trees, we approached a corner of the forest and as we rounded it, I shouted out to Steve, “Beautiful!!!” The scene was magic. We had ridden out of the shadows and hit a small patch up sunshine, as the clouds parted, and we had golden fields as a scene. It was simply beautiful! 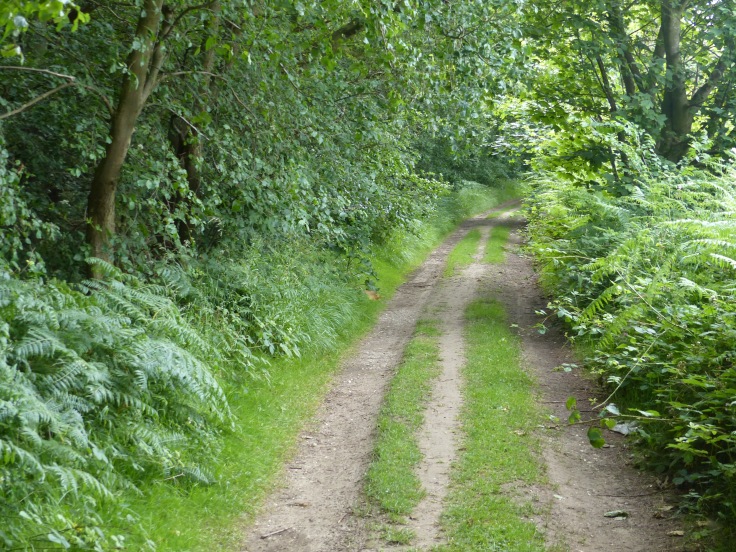 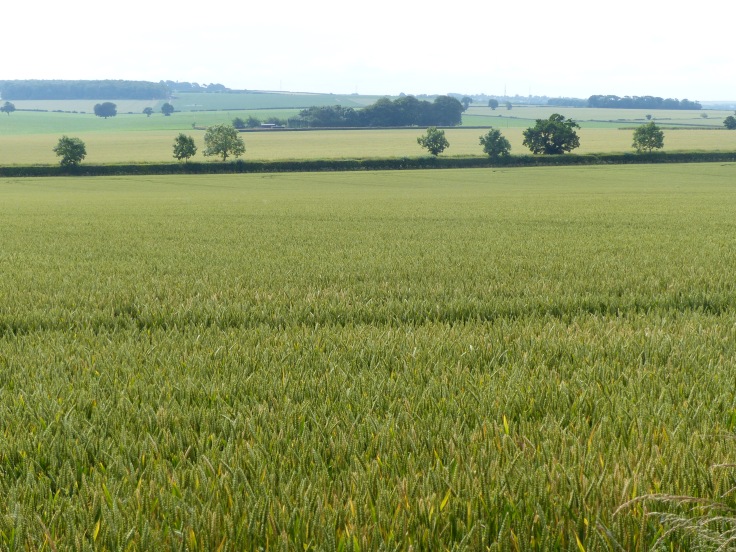 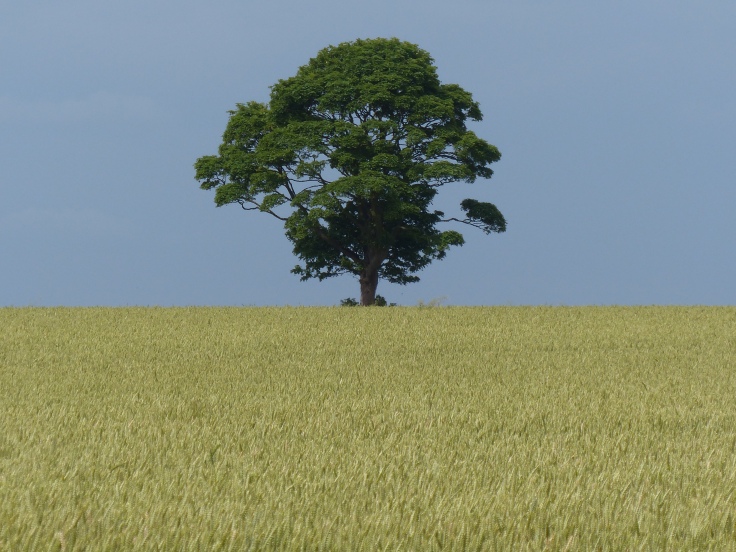 We rode into the tiny village of Great Limber and stopped for elevenses. The heavy rain had, so far, stayed away, but its good mate the heavy wind had started. We escaped this briefly by having our snack in a bus shelter and then setting off again, with about 25km to go, to make it to Market Rasen. We had quite a few hills to deal with. Some were gentle, some were short, some were long and some were mean! We both felt it in our quads by the end of the ride!

We almost did it! We almost made it! With about 8km to go, the rain started and then it got a little heavier and then it was definitely time to stop and put the slicks on again. Now dressed in the waterproofs, we set off again, slightly vision impaired from the rain drops on the sunglasses. We’ve discovered that sunglasses are a necessary piece of equipment, even if the sun isn’t shining, because more than once on this trip, we’ve had to stop for Steve to get a bug out of my eye! I’m travelling at speed, they’re flying at speed, and we seem to keep colliding! Glasses help to provide a necessary barrier between me and the bug population! We finished our ride into Market Rasen, in the rain, but you know what? It was such fun! I don’t mind the rain if it isn’t cold and it wasn’t cold, so we just pedalled along, getting a bit wet, but it was still a terrific ride.

We arrived in the town after 53km of riding and with the rain coming down, we again decided on solid walls for accommodation. We found a tea room with outdoor, but sheltered seating, where we could keep an eye on the bikes and researched a place to stay. We again find ourselves in a pub with B&B, but the people are friendly. We had to give our breakfast order for the morning and I asked if we had to choose an option from the menu or if we could mix and match things from different options. “You can have anythin’ y’like me darlin’” she said. “What would y’like me loov?” I told her what I would like and then she turned to Steve, “And what would y’like me loov?” Steve gave his order, then asked if he could also have hash browns. “Of course me sweetie, yer can ‘ave ‘ash browns me loov. Right me darlin’ Tash will ‘ave that ready for yer in the mornin’” I just have to say it…I just love it! I just love these people!

The rain is supposed to ease, so we are hoping we can again return to our favoured little tent tomorrow. We may get a few drops of rain again as we ride, but that’s OK because it isn’t supposed to be cold, so a bit of sogginess is fine. Another great ride. Lovely scenery, kind people and a fun route that took us on roads and through fields. I don’t think I can truthfully say the hills were classified as “fun”, but even they were OK, because everything else was fun and lovely, so I think it balanced out. A top ride! A magic Monday!

I’m just going to sign off with a picture of my tan! Yes, a tan! It’s faded slightly, what with there not being a lot of sun here ’n all, but it’s still there. I wear Keens sandals each day and I think you can probably get an idea of the design, because I have a unique tan! Check out my spots!