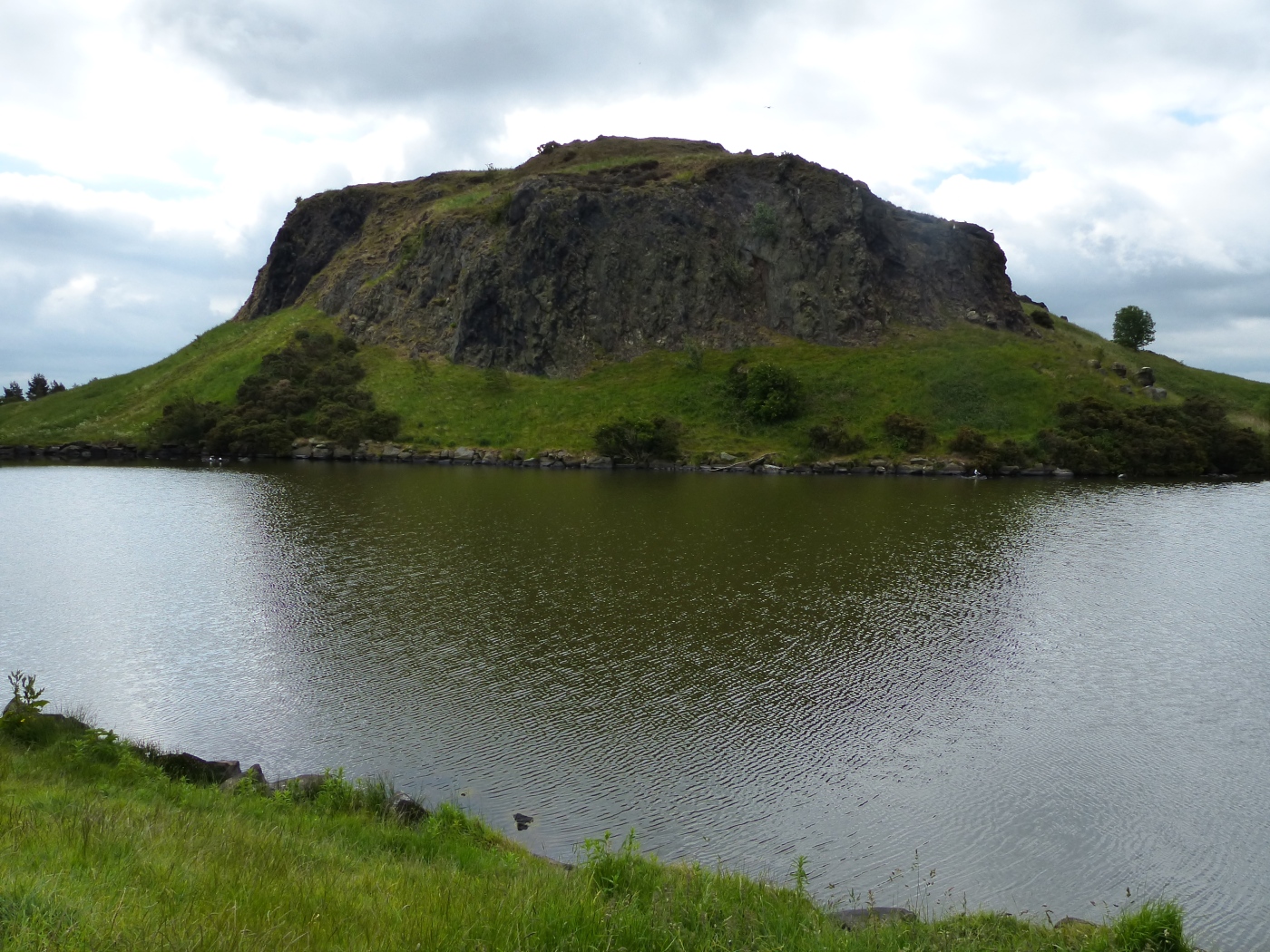 Well, I think our philosophy has become “see a hill…climb it!” because we tackled another one today. Today was again spent at a fairly leisurely pace and we didn’t do too much, so as a reflection of that slower day, this blog post will be less an account of the different things we did and more of a blow-by-blow account of just a couple of things, since there isn’t a whole lot to report!

The first activity of the day was to climb Arthur’s Seat. Arthur’s Seat is a dormant volcano that stands 251 metres above sea level. It sits in the same park where I did the 10K run the other day and the course for that run actually had us running up part of it. Well today, we decided to climb to the summit. We drove out to the park and could see many other people rambling along the base of the rock and then becoming little specks, like ants winding around the sides of the great monolith and then appearing like sprinkles on top of the grand tier, right at the summit.

We set off climbing a fairly gentle grass slope, which soon transformed into a steeper slope with some rocky bits.

This then became a rocky track, winding around the edge, with a steep drop down the side. I actually liked that it was completely “au naturel”, so to speak. There were no hand rails, no steps, nothing that had been constructed or added, it was just that great huge rock and we had to take it as it was and climb it with only the benefits of what nature gave us in the form of weathered holes in the rock, indentations from the thousands of previous climbers, or tracks formed by erosion. That really made it for me. It was terrific to be in the great outdoors, climbing a natural landmark, with no added assistance and then having the reward of the spectacular 360 degree view across the landscape and the city of Edinburgh.

We eventually made it to the top and stood a little precariously on the rocky peak and just took in the magnificent vista that spread out before us. It was just magic.

Then it was a case of getting down! This proved a little more difficult and required a finely honed skill. This skill requires great precision, coordination and exceptional talent…I’m of course speaking of the skill of…bum sliding! Yep, there were parts of the descent that required the use of a rear-end to slide down a rock or balance on a ledge, before jumping down to the next level. Our skills proved to be of Olympic standard!

We made it to the bottom and my legs, although I’ll admit they are still a little fatigued from accumulated hill cycling and Sunday’s hill running, managed the climb up and down without too much trouble. We returned to our little hoose for a spot of lunch and then headed out for the second main event of the day. We drove out to Hamilton, which is quite close to Glasgow, to visit Steve’s great aunt. It was another lovely moment where Steve was able to share some family experiences and family stories with his mum and dad and a Scottish relative. We sat with Aunt Jessie in her cosy little sitting room and were promptly offered tea and cake and the three generations of Bambridges happily chatted and shared stories and caught up on their lives and the comings and goings in their respective parts of the world. I just happily sat and listened and practised interpreting Jessie’s gorgeous, broad, thick Scots accent. She was lovely, so it was a lovely visit with a lovely lady. As a side note, I also enjoyed being with someone who was my size! It’s not often I get to stand next to someone on my head level. That was nice too!

That was the day. Our last full day with Len and Pauline and our last night in our cosy wee hoose, before we part company. Len and Pauline will continue their travels for a few more weeks and Steve and I are still undecided as to where we’ll go. The weather forecast over the next couple of weeks is for rain, 8C temperatures and wind up to 45km/ph! So we’re at a bit of a crossroads, trying to decide what to do and where and how to progress. We’ve at least decided to spend another couple of days in Edinburgh to explore the city a bit further and roam some of the outer streets and areas. We’ve had a lovely few days with Len and Pauline and slowing down the pace of life somewhat. That’s been quite a treat. We’ll continue exploring and then continue travelling and see what Scotland has to give us. So far it’s presented us with some real gems, so I can’t wait to see what else is in the treasure chest!

4 thoughts on “These Hills Were Made for Climbing”