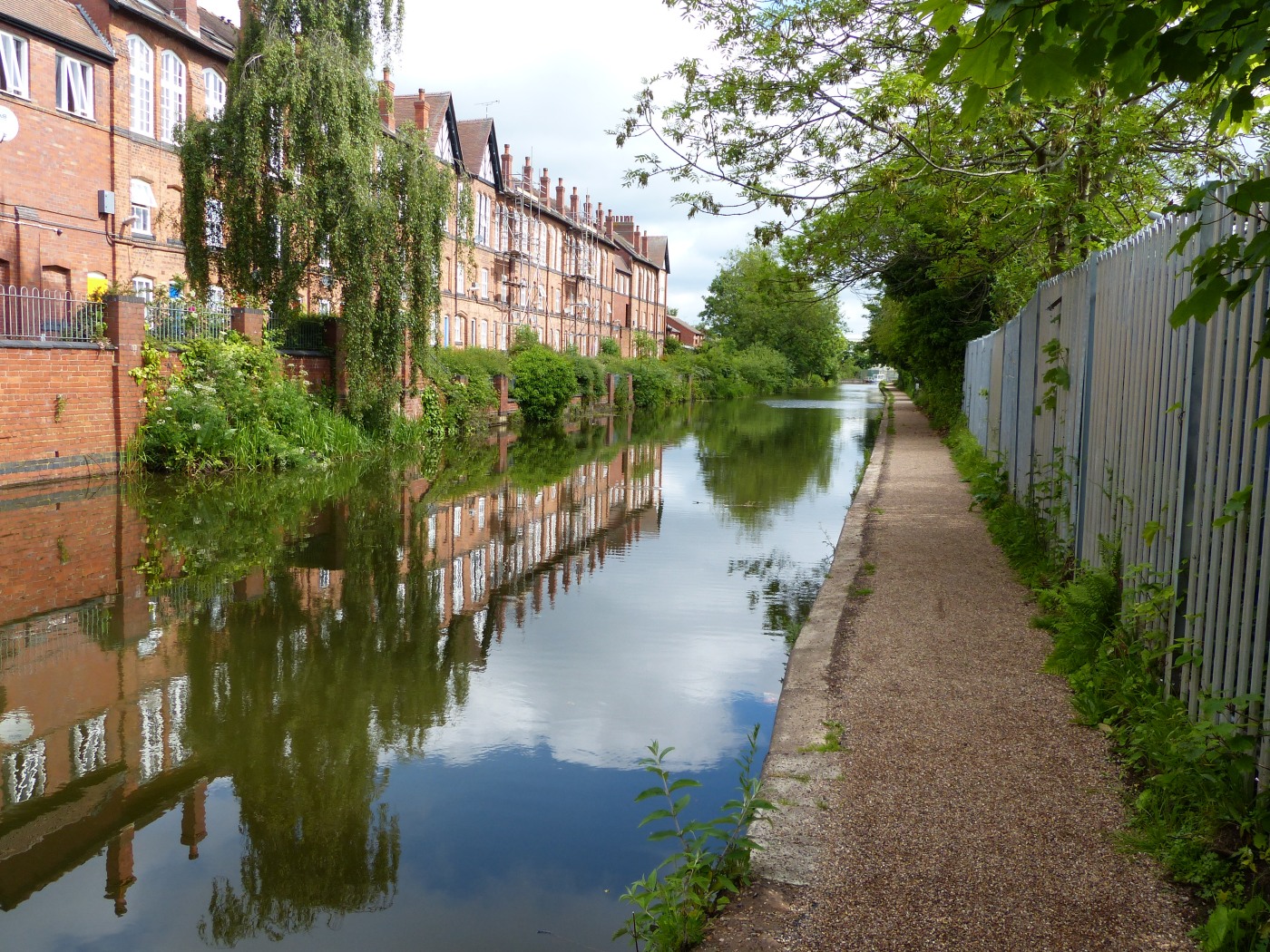 For the first time on this trip I managed to run two days in a row! Stoked! I headed down to the hotel gym and was able to fit in another 10K before we left. We loaded up the bikes outside the hotel under grey skies and then set off pedalling. We’d only planned a short ride today, to the nearby town of Nuneaton, so we can keep tomorrow’s train ride to Birmingham for Steve’s bike seat, relatively short. The ride was a leisurely one and mostly along the Coventry Canal, so it was flat and nice and easy. The reflections in the canal looked really speccy and when we rode under a bridge, it looked like we were riding next to a complete tunnel, or a huge empty pipe, because it seemed like there was a top and a bottom to the tunnel. It was just the reflection of the roof of the tunnel in the water, but the illusion was quite something.

We rode along the canal path and went past a couple of men working on a fence.

“Yerv got a load there loov,” one of them said.

“Yes!” I laughed and thanked them for moving to the side to let us past.

Now I know I may have mentioned a few dozen times, the chattiness of the locals we come across and how they settle in for a chat and adopt a position for a good ol’ chin wag. Well, we encountered a fella who took things to the next level! We saw a cyclist up ahead who had stopped on the path and was talking to a couple of fellas sitting on the side of the path with their cans of liquid breakfast. As we approached, the cyclist actually put his arm across the path and stopped us!

“Where are you off to? I’m very nosy! These fellas will tell you that!”

After getting over the initial shock of actually being blocked on the path as a conversation starter, we stood there and chatted happily with all three of them. The man with the bike asked us about the trip and said he was a tourer too and he was leaving soon to go over and watch the Tour de France. He asked about our mileage and our route and thought it all sounded great. I chatted to the two men beside the path, who joined the many other people who commented that I was carrying more load than Steve! They asked how many punctures we’d had and what our plans were. We were a merry and chatty little group there beside the canal! The cyclist asked where we stayed as we travelled.

“We camp as much as we can,” I said, “we really only stay in hotels if the weather forces us to or we need wifi or electricity.”

He then turned to Steve and said, “Yer lucky yer gel will do it because moi woif wouldn’t camp!”

Oh, never underestimate what a gel will do!

They all wished us well and “good luck to you” and we pedalled on our way.

We had a few tricky barriers to navigate, which are set up for walkers and definitely not for bikes and most absolutely definitely not for bikes that have big fat panniers sticking out the side! It always takes some huffing and manoeuvring to get the bikes through the narrow space and then around the narrow corner of the railings, to get them through what is something like a very narrow ‘S’ shape. It means I have to lift all the weight of the bike in order to keep it straight and then lift it around the narrow bend of the barrier. I do a lot of huffing and heaving! We get through though!

Actually, as we were riding past some people on a canal boat, we had to turn around and go back the way we’d come. A man on the boat saw me sitting up in the saddle and tip-toeing the bike around as I turned the handlebars in a u-turn. He said, “Don’t drop the bike, it’d be a helluva job pickin’ it oop again! Never a truer word spoken! I have had to pick the bike up many times…off the road…out of mud…out of bushes and it is indeed a mighty weight to have to lift! Then these barriers in the path come along, which we’ve tackled before, but I do need to lift the bike up to manoeuvre it around and it’s no light weight!

“Are you feeling a bit nervous about the canal too?” asked Steve.

I nodded. “It seems to be getting closer!”

We decided to play it safe and head onto the road. After a short pedal through some suburban neighbourhoods, we picked up the canal again where it now gave us a wider and fully sealed path, so our nerves abated, the canal seemed to give us some distance again rather than beckon us to its depths and we rode on contentedly.

A mere 24km later we rolled into the town of Nuneaton and arrived at our small hotel, chosen for its close proximity to the train station. It wasn’t open and we had a few hours before check-in so we went in search of a pub to continue our new tradition of having a Sunday pub lunch. We walked through the town streets and eventually stopped at a place with convenient outdoor seating and a spot where we could park the bikes. Steve went in to order drinks while I held the table. Steve came back and said the only menu for the day was the Sunday carvery of roast meats but there were vegetables I could have, although some were in a cheese sauce and some were roasted. Steve had spoken to the chef, who was standing in position carving the various roasts and mentioned he was with his vegan wife.

“I’ve got a vegan in the family,” the chef said, “They eat hardly anything! They can’t have eggs or milk can they.”

[Side note just to clarify: I don’t ever think of how I eat as “can’t”. It’s not that I “can’t” eat those things because I can if I want to. I just choose not to!]

When Steve told me this, I was sitting and deciding what to do because I’m a bit wary of eating roast veg that’s probably been roasted with meat, so I was just thinking of what to do, when the waitress appeared beside the table.

“He said he can do you a five bean chilli if you like.”

I looked at her, smiled and kind of wilted into my chair with pleasure! “That would be magnificent!” I said.

So, Steve sat down to an overflowing plate of vegetables, roast beef, Yorkshire pudding and gravy and I was served a big plate of absolutely delicious bean chilli and rice!

When we’d finished I asked the waitress if I could speak to the chef. I went inside and she called him out from the kitchen.

“Thank you so much, that was sensational” I said. “It was really good of you to go to that trouble to do something different for me.”

“No, there aren’t a lot of us and we’re a bit high-maintenance and tend to be a nuisance wherever we go!” I said.

He thanked me and he went back into the kitchen with a smile and I walked out with a big smile too! My belly was full of delicious food, thanks to this nice man who had not seen me as a bother but had taken the trouble to accommodate this high-maintenance foreign patron, on the spur of the moment and without even being asked. What a champion! I was most grateful!

While we’d been sitting at the pub, there were crowds forming along the street and lots of people walking around with balloons. Something was happening in the bustling streets of Nuneaton! We soon discovered that a parade was about to start. We finished our lunch and then walked the bikes up the street to take up a viewing position. This was now our third parade on our trip. We were at Carnivale in Toulouse, then the May Day parade in Compiegne and now a parade for, we have no idea what, in Nuneaton! This one didn’t have any of the pomp and pageantry of the other two. It actually reminded me of the parades I used to go to as a youngster. The kind where the floats are all on the back of trucks and the name of each one is hanging off the side on a white sheet with slightly wonky sewn on letters and people hanging off the side with buckets to collect donations. It was great and made me smile! It was a classic small town parade with the Carnival Queens and the little tackers running around in costumes. I was most impressed with one of the marching bands who had three people playing glockenspiels. Try doing that and walk at the same time! They were walking along with the glockenspiels around their necks, looking down at the bars as they struck them and trying to snatch a glance ahead of themselves to make sure they were going in a straight line and not running up the back of the drummer or trumpet player in front of them! Super coordination and multi-tasking! 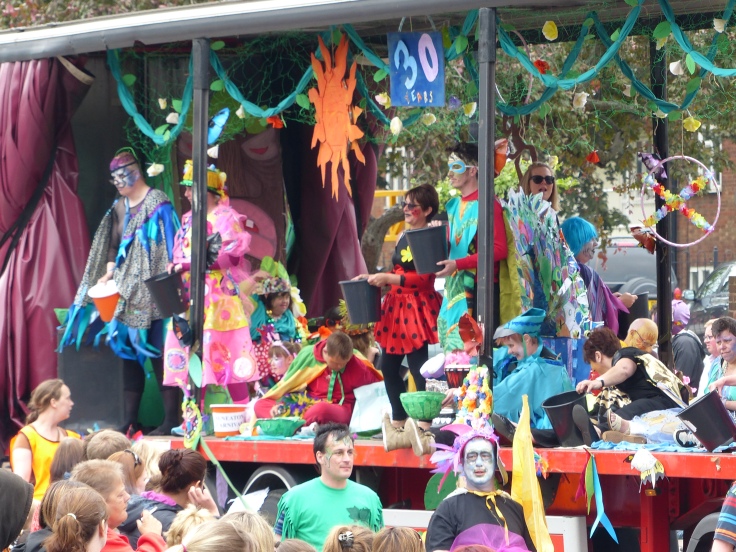 We stayed and watched for a while but then the grey skies turned the day even chillier, so we headed off to the hotel. As we walked along another man stopped and asked us about our bikes and what we were doing and said he’d ridden from Lands End to John O Groats a couple of years ago. He wished us well too. Another friendly encounter with a local!

When we were eventually able to check in, after a phone call to let someone know we were waiting on the doorstep, we settled in and discovered we’re the only ones here for the night. I mean the ONLY ones! No staff, no other guests, just us! It’s the sort of place where the owner turns up, checks you in and then leaves, which he did. He was nice and friendly, despite the fact that he hadn’t turned up to let us in, but now we are left with the run of the place! Tomorrow we’ll toddle down the street to the train station and travel to Birmingham, where hopefully we’ll have more success with collecting a replacement saddle for Steve than we’ve had with finding trousers for him!

It was a nice leisurely day, although I’m beginning to get “city fatigue”! I want to be back in the countryside and the little villages again. “You’ve only been in a city for two days!” Steve reminded me.

“It feels like ages!” I said, “I’m ready to escape the noise and the traffic and the crowds!” Once we’ve done what we need to do in Birmingham, we’ll continue our onward pedalling and hopefully head to some more out of the way places with some peace and quiet. Aren’t I hopeless! A couple of days in a big town or a city and I can’t cope! Pathetic! A village gal at heart most definitely! Whether we’ve been in towns, cities or villages though, we are still meeting lovely, friendly, helpful people, having interesting conversations with strangers and experiencing new and memorable things and I just love that, no matter where I am! That’s what this sort of touring is all about…time for people…time in places…time to just soak up the experiences. What a great way to spend our time, no matter where we are! Loov it!