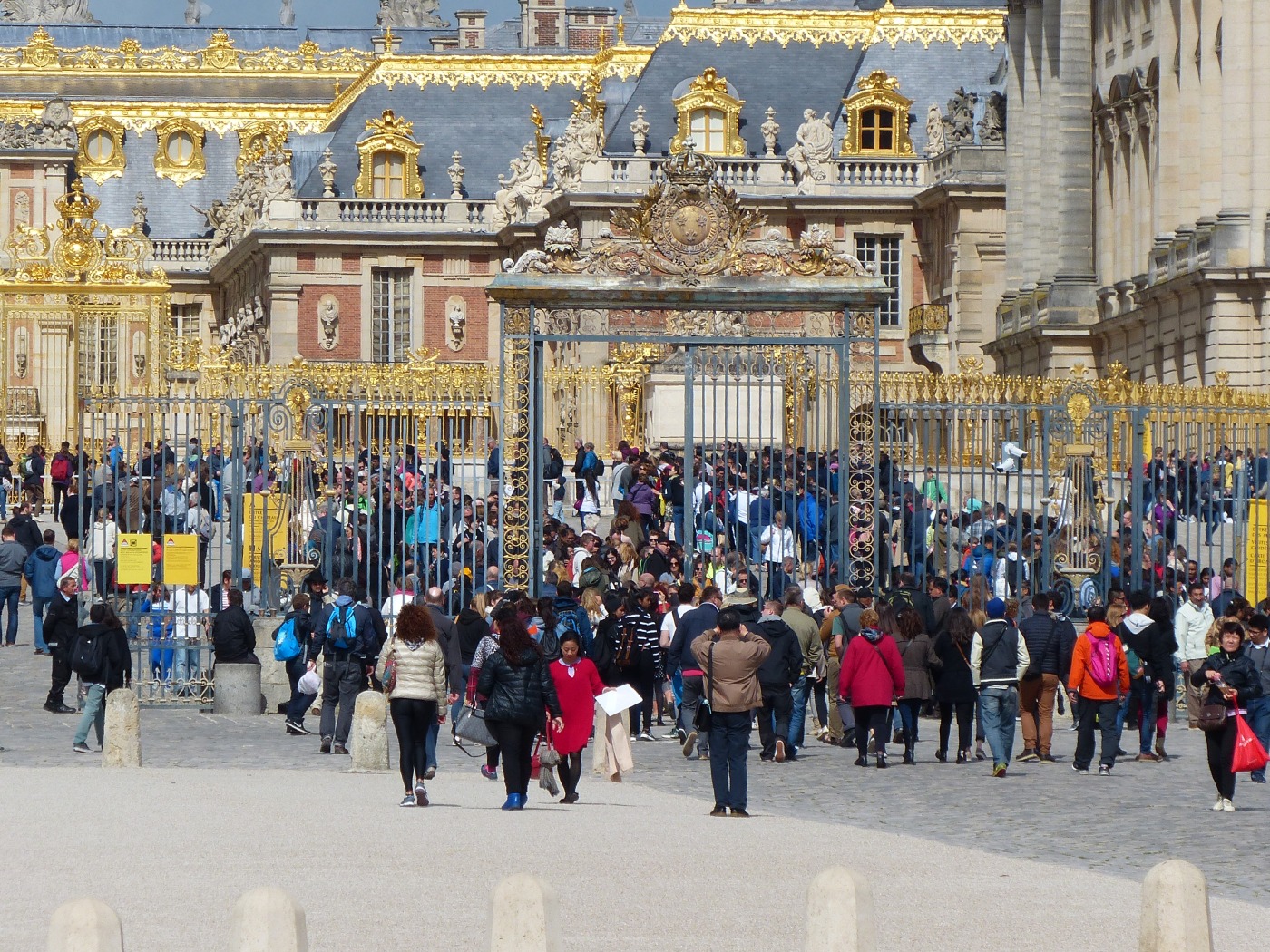 With the day once again presenting us with rain, wind and cold, we decided to make the most of the weather and spend a day indoors, so we hopped on the Metro and headed for the Palace of Versailles. After nearly 90 minutes and three trains, we wandered out of the station to discover that every tourist in Paris seemed to have the same idea as us! We weren’t expecting this! As we walked up to the Chateau, the lines were snaking and huge! We bought our tickets and joined the very, very long queue.

We made it inside, with our bags firmly clutched in front of us, after passing at least five signs warning of pick-pockets! We then set about wandering the rooms and halls of this enormous, ornate palace. The wandering became somewhat difficult, due to the huge numbers of people and at times we were just swept along with the crowd, so it was hard to really take our time and experience it at a leisurely pace. Steve and I did lose each other at one point and after frantic searching, located each other quite a way apart. We both said we were on the verge of having security page each of us. We stuck close to each other after that! The palace was certainly interesting and beautiful and ornate and grand, but we both commented that we actually liked our visit to the Chateau Compiegne better. I don’t know if it was just the crowds, because in Compiegne we more or less had the whole place to ourselves, or whether it was the audio guide being a bit lacking in narrative, so there was less of a feeling of story attached to this visit. I don’t know what it was but we were both just a wee bit disappointed.

When we’d finished our tour of the main rooms in the chateau, we continued on to the museum, where there were lots of paintings and sculptures to see. The crowds had thinned markedly, people were obviously less interested in this section, so we were able to slow down and read and take our time looking at things.

Then we went down to the rooms where King Louis’s daughters lived and the crowds were thinner here too, so I quite enjoyed that section and the audio guide improved and gave a better sense of life here at the time. Here are some things I found interesting:

* Of Louis’s eight daughters, only the eldest, Elizabeth married. Apparently Catholic princes were hard to come by at the time. The others stayed single their whole lives and some died young. I wondered if marriage would have been something of an escape for the poor lasses, who really just lived a life of boredom and public scrutiny, but probably not. I don’t think their single life was footloose and fancy free and marriage probably wouldn’t have been a winner either. So the poor petals were just left to play their harpsichord and potter about in voluminous and highly uncomfortable dresses. Poor dears.

* The princesses’ bedchambers were public spaces. They had to entertain guests there and the time they spent dressing and having their wigs put on and all manner of personal presentation activities that were performed, were often done with an audience.

* We saw the royal dining room and there was the table set for two, for the king and queen and in front of that was seating. Yes, the royal dinner was a public affair too. The royal couple would sit down to dine and that activity drew quite a large audience. So people from the area would pop along to the palace to be entertained watching King Louis chase his peas around his plate and waiting expectantly to see if the Queen slurped her gravy! Poor royals! I guess with no paparazzi around at the time, their private life had to be public property somehow!

* All of King Louis’s daughters were in constant conflict with their father’s mistresses, who spent time at the palace. A right royal soap opera that must have been!

* A young Mozart was a visitor of the daughters’ and he dedicated a volume of sonatas to Princess Victoirre.

* The King’s bedchamber was also a public space and he was expected to conduct official business there. I wonder if he got up, or just lounged on his pillows in jammies and waved his hand about and made decisions from under the covers? At least he wouldn’t have had to greet people with bed-head hair, he’d just throw on his wig and he’s ready to entertain! Maybe the paparazzi would leave the current royals alone a bit more if they led their lives a little more like Louis and opened the doors for all and sundry to witness their mundane lives.  The magazines wouldn’t care for the photos if they could just pop along and see the Queen having her foot-spa or her corns removed or conducting business propped up on the royal four-poster!

So there you go, some gossip from the halls of Versailles!

As we walked out I saw a really intriguing statue of a scantily clad young woman holding something in her hand, with a look of endearment and devotion on her face. On closer inspection I saw that what she was holding was actually a lobster! Get out! A lobster! What on earth!!?? I have no idea what the significance of the lobster could be. Is it symbolic? Or is it just Leroy, her pet lobster? I think it must have been Leroy because she was looking at him so lovingly. But really…a lobster!!

So that, pretty much, apart from train travel, was the day. At least we spent most of it out of the awful weather and strolled around another beautiful chateau, albeit with thousands of other people, but a trip to Paris could not have been complete without having been to Versaille. I had also really wanted to see where the Treaty of Versaille was signed, although that point in history wasn’t mentioned at all in any of the information. So while the visit was a teeny bit disappointing, it was still worth it and I still learned things and saw some fascinating pieces of history.

Tomorrow we’ll hit the streets of Paris again and hope for some let-up in this wicked weather! I don’t know if we’re bringing it with us everywhere we go, or if it sees us coming and turns on the rain and wind for our benefit! Whatever it is, it’s been relentless! But in the end, who cares! Rain, shmain! We’re in Paris!

4 thoughts on “Venturing to Versailles”