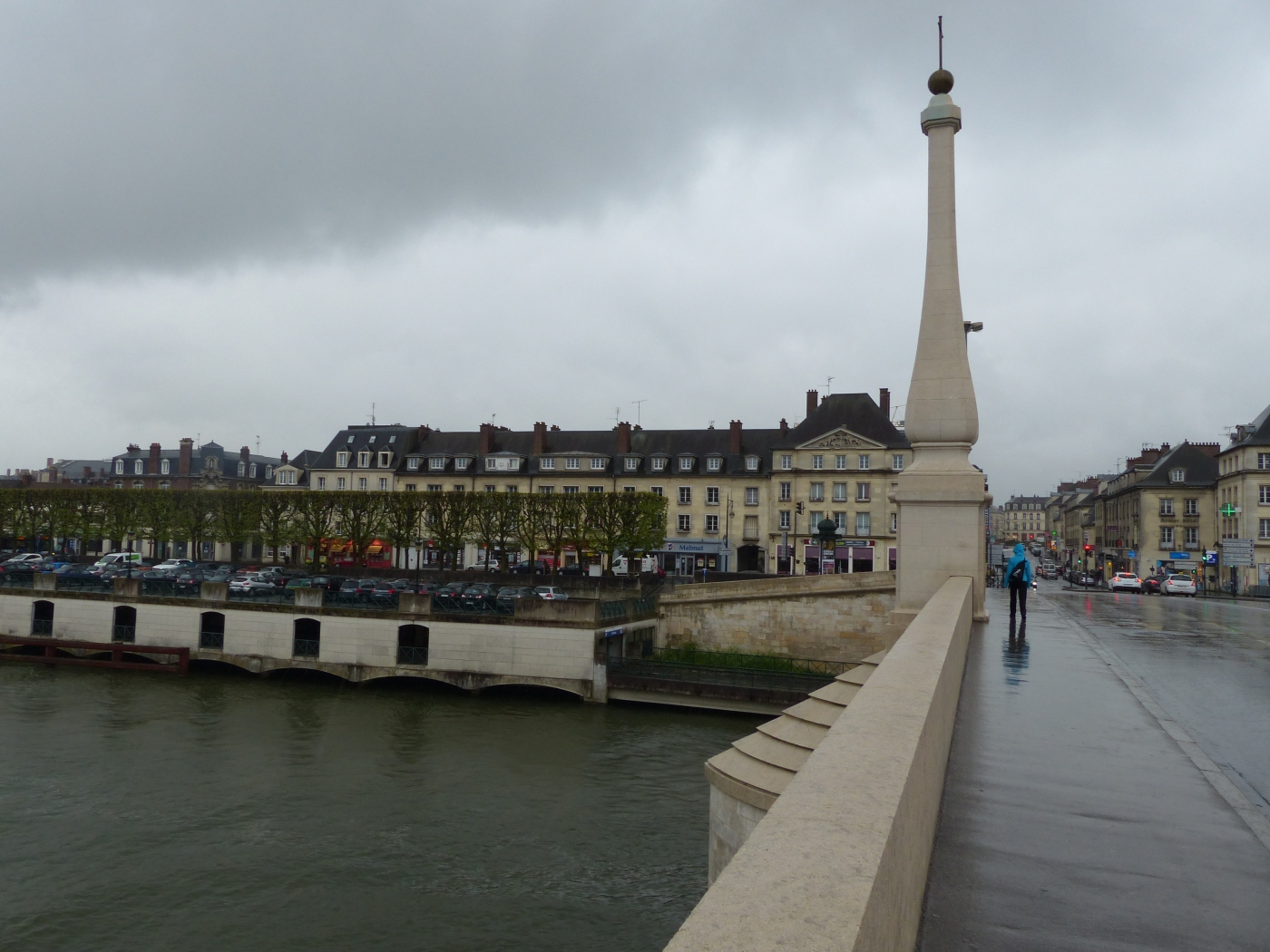 Today we had planned to stay put in Compiegne and do some roaming. Rain was forecast and the clouds did not disappoint on that score…down came the drops in a cold and relentless fashion, promising a somewhat soggy roaming experience. We caught the bus into the centre of the city and the fantastic thing about public transport here in Compiegne is…it’s free! Yep, hop on that bus, travel where you need to go and it costs not a cent! I think that’s so great. I think France is a pretty high taxing country, but I wouldn’t begrudge higher taxes if you can see where your tax dollars go, like France’s pretty enviable health-care system with some impressive tax funded services and this idea of free public transport in this particular city. If more places adopted that concept, so many more people would use it, less traffic on the road, less congestion, better for the environment and so on and so on. A great idea I think.

We strolled soggily over the bridge, across the river, carefully crossing the streets with limited sideways vision from the hoods of our raincoats. We must have looked a vision, all layered up, Steve in his waterproof socks and sandals, me looking like a bright blue telly-tubby, with my multiple layers and blue rain coat, as we walked along, pausing at the street corners to do a full body pivot, to check for traffic because our hoods were done up right to our chin and virtually covered our faces, compromising our pedestrian peripheral vision. We walked around the centre and the rain couldn’t detract from how beautiful the buildings were and how lovely the squares looked with their gardens in spring colour.

We decided to have a look at the Palais Imperial de Compiegne, the one time royal palace that is now a museum. This was, at various times, home to King Louis XVI, Napoleon Bonaparte and Marie Antoinette.  We walked through the halls and rooms and marvelled at the opulence of the furnishings and beautiful setting. There were busts and statues of Napoleon and a set of chairs with tapestry upholstery, that had an ornate J on the back of each one. Napoleon had these specifically made for Queen Josephine, but do you know what…poor Josie was never to sit in her personally monogramed chairs, because before they were delivered little Napoleon divorced her and took up with Marie Louise instead. I wonder if Marie ever sat in her predecessor’s custom made chairs or ever put a strategically placed cloth over the back of the chairs to cover all those J’s and their reminder of wife number one? I did stop every so often and just think about the fact that I was walking through a building that was once home to those famous names from history. Another unbelievable experience for a little country bumpkin from Tasmania. 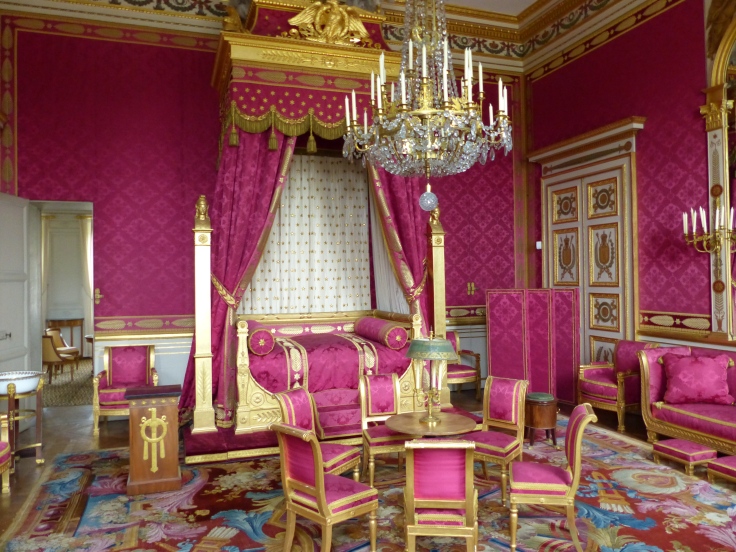 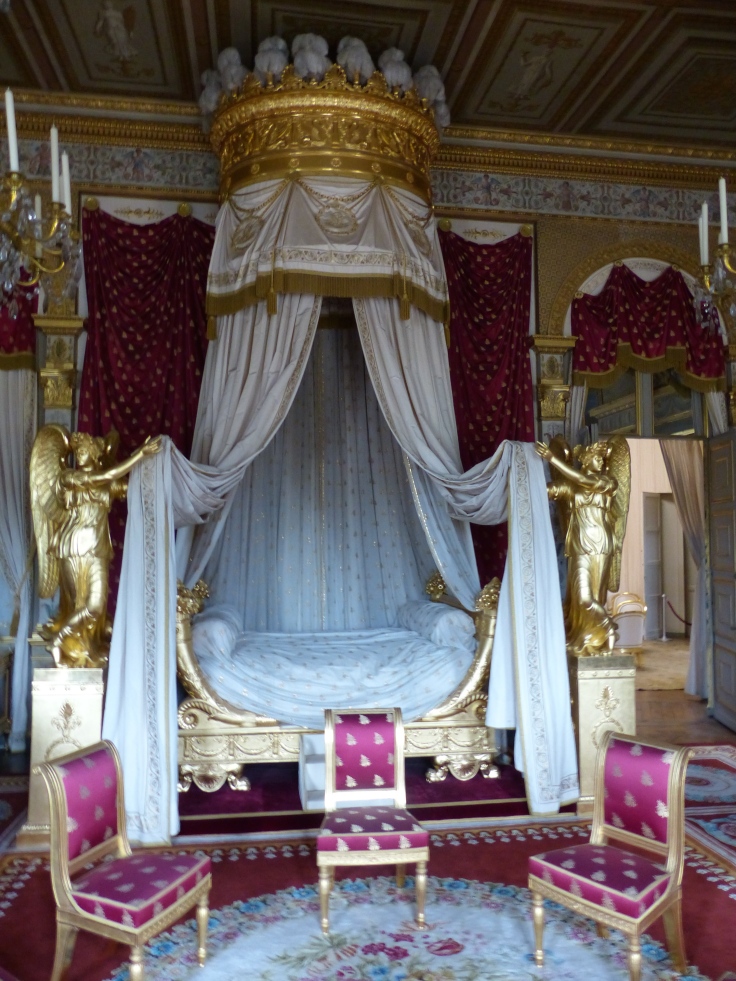 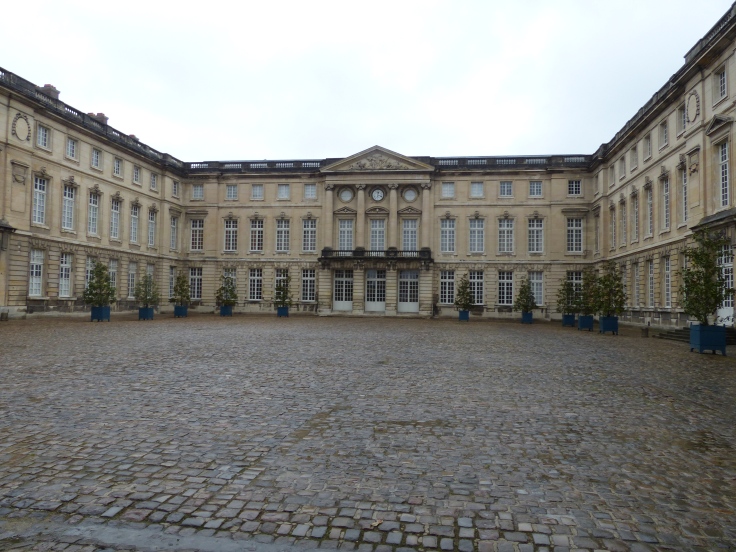 It was an interesting stroll through another period of French history, after which we emerged once more into the ongoing downpour. We headed for the bus stop again and caught our nice convenient and free mode of transport back to our room to dry off. I don’t have cause to use public transport at home, and living a ways out of town, there aren’t really those options anyway, so when I get the chance to ride a bus, I love people watching. There was such a variety of people getting on and off and I loved the wide range of countries represented by the passengers. There were obviously regular travellers, because women would get on, see someone and make a beeline for them to warmly say hello and cheek-kiss, before having a chat. Or, people would get on and stop as they walked up the aisle to cheek-kiss someone they knew, before taking their seat. It was a fun bus ride.

After returning to the room, we dried off, had a late lunch and then ventured out again, thanks to another bus, to a nearby shopping district in search of some trousers for Steve. Steve’s trousers have been falling down for a while now, because he’s lost weight as we’ve travelled. We’ve both been wondering if and how much weight we might have lost because we both have quite changed body shapes. Steve has really slimmed down and I just notice a few more bones and muscles in places that I couldn’t see before. We also both now have trousers in our supply that we can take on and off without having to undo the buttons or zips, because they just slide up and down. I have mostly elastic trousers with me though, so they all fit fine, but Steve’s have been seriously falling down because he is a slim and trim version of his pre-European self. We walked through a couple of stores and Steve discovered the intricacies of European sizing. It turned out that an XL here is actually two sizes smaller than an XL at home! Does that say something about the expanding size of Australians!? Anyway, there was no luck finding trousers today, so Steve will just have to continue walking around with his hands in his pockets to hold his strides up, for a little bit longer!

So we didn’t do a whole lot today and didn’t venture too far afield, but we got to see some interesting parts of the city of Compiegne. We continue to walk in the footsteps of some amazing people and events from history, admire some beautiful buildings and places and while the weather continues to be our nemesis, our enjoyment for what we are able to do is undampened! Hear that clouds, rain and wind! We’re going to do it anyway and enjoy every minute of it, so you might as well just give up! OK! …..pleeeeaaaaassee…!!

4 thoughts on “Roaming in the Rain”