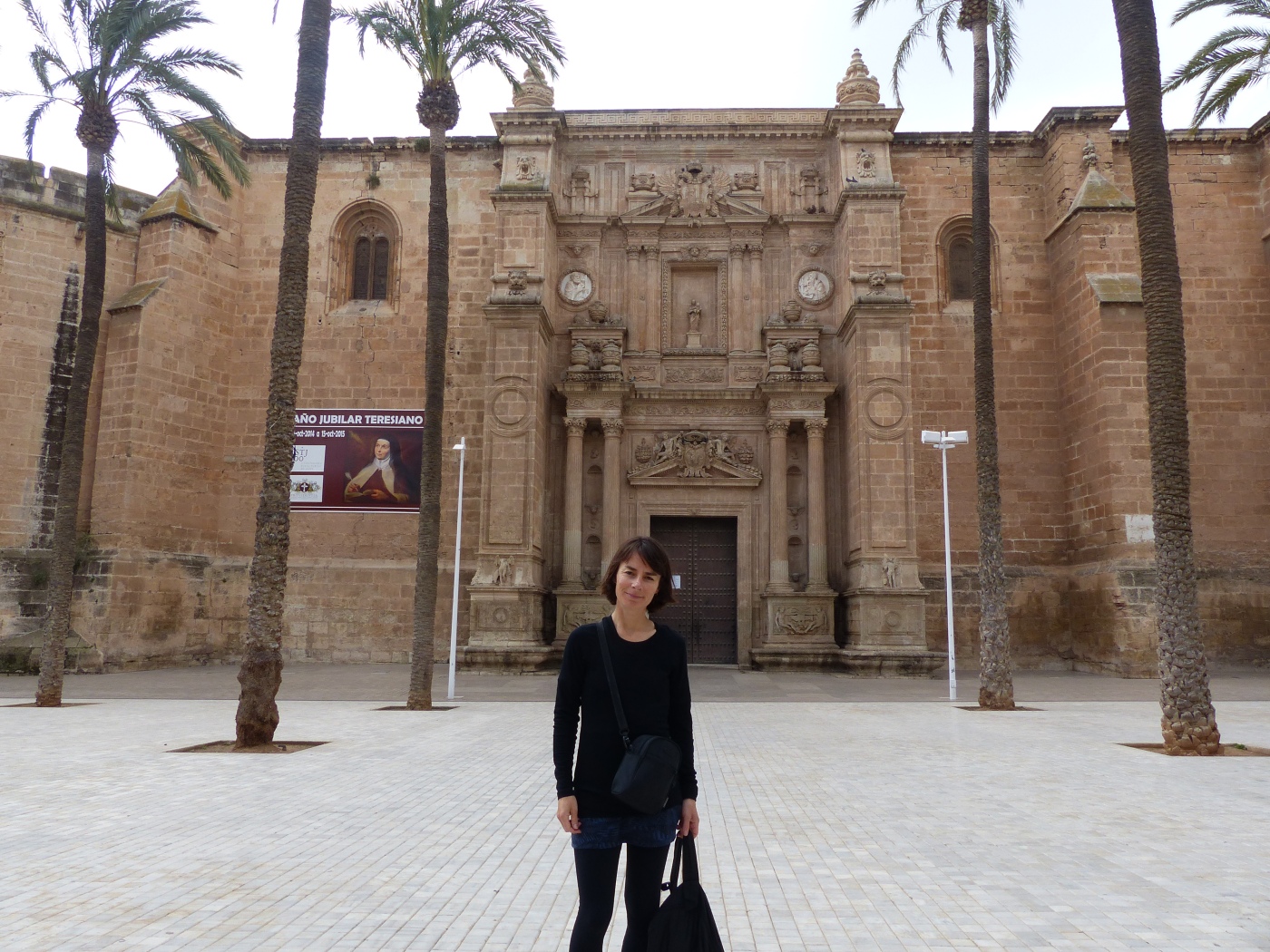 We had a little rest day today and took it easy roaming around the streets of Almeria. The day started with sunshine, which was lovely and with wind, which was not so lovely. We strolled up the street to have a look at the Almeria Cathedral which dates back to 1524. It was built as a fortress with hardly any windows because of the pirate attacks from North Africa that were happening at the time. It was nice to sit in the small plaza around the cathedral and just have a bit of sunshine and peace. As we were crossing a street on our way to the cathedral, I saw an interesting form of city transport – a lady looking very glam in her bright pink puffer jacket, riding a quad bike! Yes, an actual quad bike, not a city version of a quad bike, like a new mini hummer or something like that, but an actual quad bike. I guess when it’s necessary to navigate narrow back streets and the little lane ways that make up cities like Almeria, a quad bike is as good as anything as far as compact transport goes. She wasn’t sacrificing glam though, sitting astride that thing!

We roamed around the streets and came to an interesting looking monument. It had a picture of a saint in the middle and a fence surrounding it, with padlocks hanging from it. It turns out the picture is St. Valentine and every Valentine’s Day, people buy a padlock and secure it to the fence as a symbol for the person they love. All together now…..aaaaahhhhhh. There were people’s names and messages written on the locks and I thought it was one of the more interesting little monuments we’ve seen!

On we roamed, down near the water and so far the sun was still shining. There were lots and lots of people with dogs out and about today and as we walked along, a woman came towards us with a dog and a little, extremely cute, fluffy pup. Well, that pup had a smile on its face almost bigger than itself. It was bouncing and grinning and racing around, full of the joys of life. It ran up to me and I gave it a pat and chatted and then it kept following us. The woman had kept walking, but that little pup decided we were as interesting as anything else going on about the place, so it might as well stick with these two foreigners and see where the day might lead. I stopped and patted it and it bounced and wagged and smiled. I pointed back towards the woman (who was oblivious to her little absconding mini-pooch) but it didn’t want to go in the direction I was pointing,  it wanted to stick with us. So, I just had to stop and chat to it for a while longer and get my much missed fix of doggie contact, until the woman noticed she was down one in the canine head count.  She chirped out something in Spanish and the little fella responded to it in a flash and that adorable little pup scooted away from us and on it went back to its real owner. It was a nice little doggie distraction for a while though.

Now the clouds were starting to set in and that wind was firing up. We crossed the busy main street and here we saw what I thought were two of the most creative buskers I’ve seen. We waited at the pedestrian crossing for our little green man to appear and then made our frantic, life preserving sprint across the road (because that little green man doesn’t count for a dot with motorists here, they just power on through regardless). Then two fellas ran into the pedestrian crossing and stopped. After we’d made it safely across we looked back and they were standing in the middle of the crossing, facing the stopped cars and doing a juggling act. They were great. For the whole time the traffic had the red light, they juggled (in the wind!) and didn’t drop a ball and then just as the traffic was about to start moving, they quickly went up the line of cars, with palms outstretched to gather the coins and contributions from their motoring audience. I thought that was great!

We continued roaming around a bit more and then went back to our room for a short pit stop. Then we headed out again to duck to the supermercado to get something for supper and to go to a bookstore to get a couple of maps. The sky was looking a bit grey and the wind was quite blowy now, but off we went. Then…just as we were leaving the supermercado, down came the rain! I mean…DOWN CAME THE RAIN! It poured! We power-walked…we splashed…we squelched and eventually made it back to our hotel, feeling very soggy, but feeling it could have been worse…we could have been pedalling with another 15km to go to some sort of sanctuary. We put on our rain coats and headed back out to find the bookstore, which we did, but of course…closed. We still forget about siesta sometimes and everything closes for three hours, so we headed back to the room to wait for things to open again. While we waited…BOOM!…THWACK!…RUUUMMMMBLE… Oh yes, the storm had struck! Thunder and lightning opened up the skies! We were very glad we had done the ride yesterday and were here in Almeria to sit out the weather, rather than being out in it on a bike again. 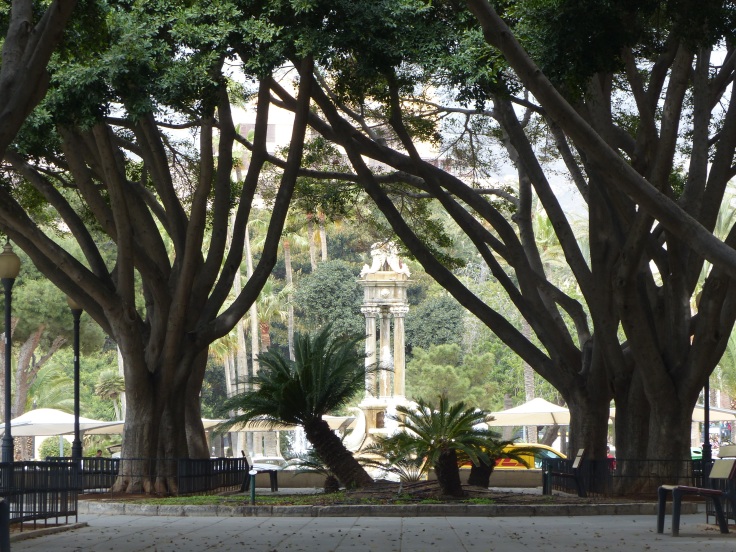 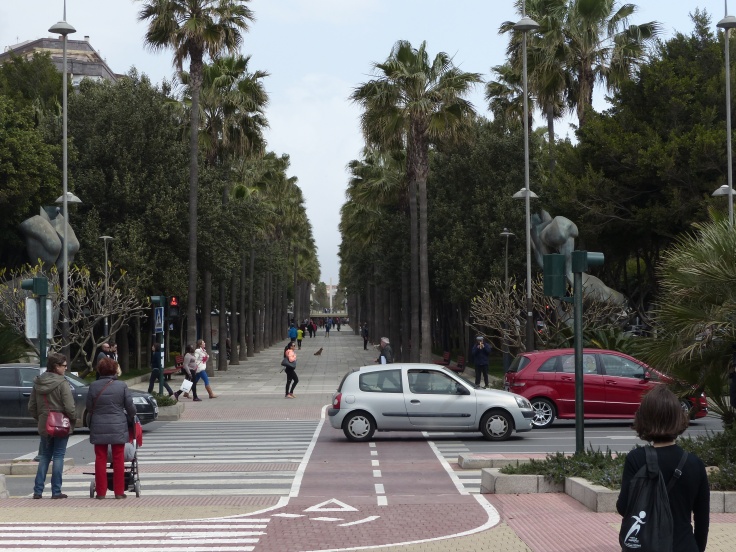 So we’ve made a new decision about the next stage of our travels. There are storms and awful weather right up the coast of Spain at the moment and it’s forecast to be like that for the next week.  In fact a town near to here is already flooded. So we’ve decided to hire a mini-van, throw the bikes in the back and drive part way up the coast to leap-frog some of the worst weather and then start riding again from Barcelona. We’re also conscious of having to get North before too long because we have a date to be in France for Anzac Day, so we can’t tarry too much down here. So, we’ve decided we aren’t cheating, we’re just riding in a car for a few days (no trains go where we need to go) and it will mean we can still make some progress, rather than being stuck in one place while storms rage around us. I’m also hoping if we have these few days off the bikes, I might be able to do some more running. I was planning to do a run today, but the storm got in the way of those plans. So, with Steve at the wheel, because he’s the one whose brain can switch easily from driving on the left to driving on the right and mine takes a bit more time to warm up to that (and we can’t really wait for that warm up to happen if we’re to avoid traffic mishaps and frequent irate honking from Spanish motorists) we’ll begin heading up the east coast towards Barcelona.

Oh, and I did smile this afternoon when Steve said, “I think we need some sort of plan for where we go.”

“Why are you smiling,” he asked in a puzzled tone.

“Oh, just how I’m the one who likes having a plan and who thought some plans would be a good idea and you thought we should just go with the flow and not have any plans and now you’ve come full circle!”

“Not a complete circle,” he was quick to add.

So today was a nice day of rest and roaming. It was nice to reward the legs with a bit of relaxation and recovery too, although we still managed to get soggy and wet, but it was all good. Now it is North we go! I hope we navigate the roads OK. We’ve had first hand experience of the drivers here from the precarious position of a bike seat, so we’ll see how we go as motorists being in there amongst it. One thing’s for sure, if we pass a cyclist, we will be giving them a thumbs up, a clap, giving them a nice wide berth and we’ll probably even stop and offer them a bottle of water too. We’d like it if someone did that for us. Here we come fellow cyclists, your support crew is hitting the road!